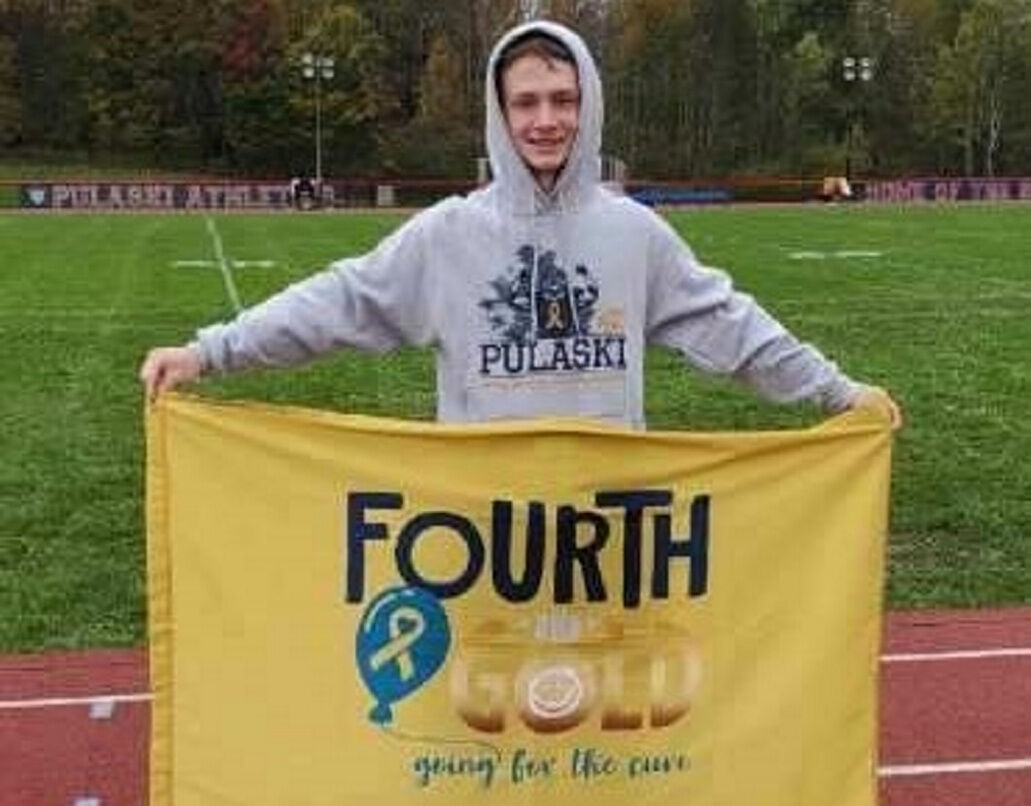 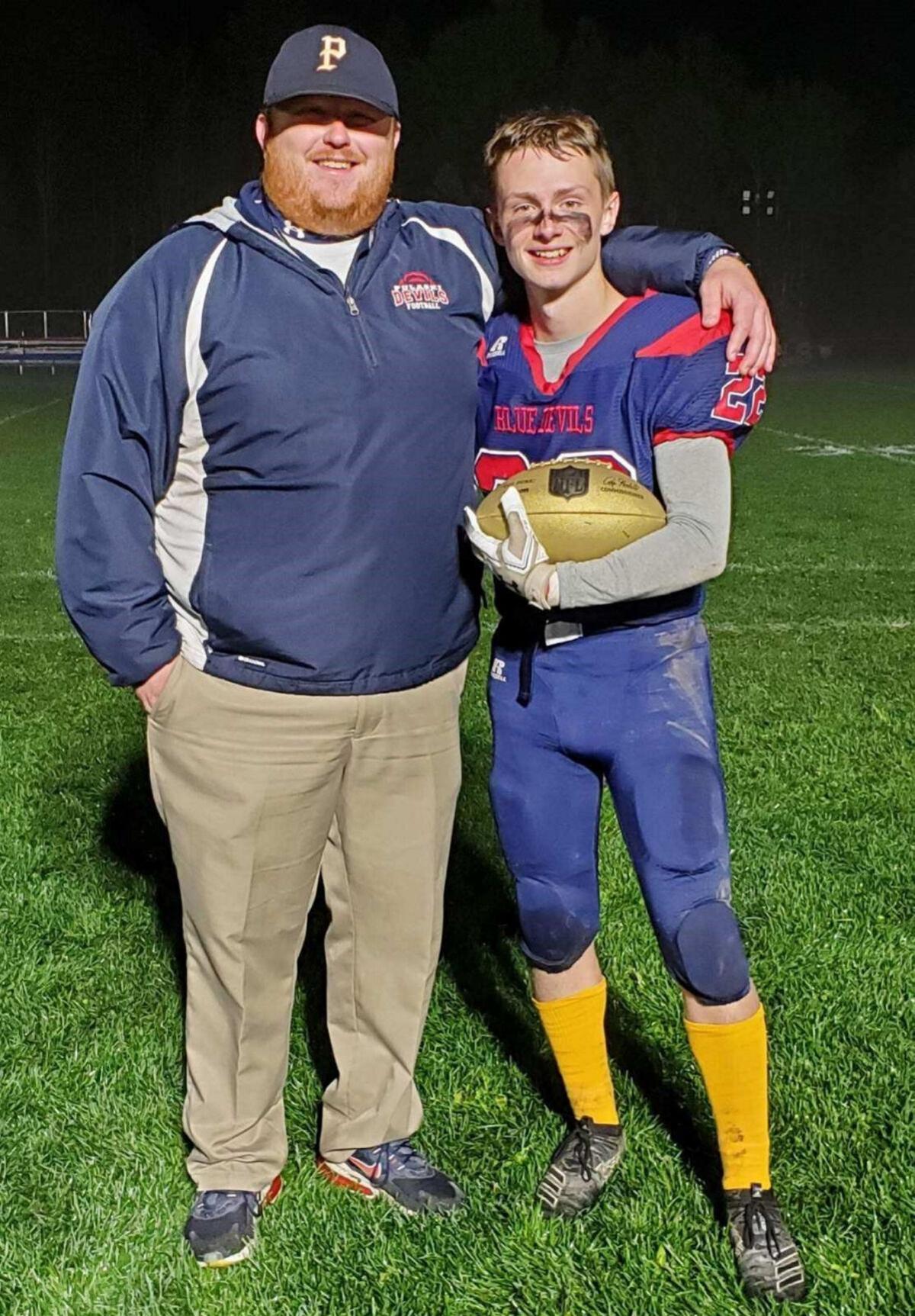 PULASKI — Owen Isgar displayed the size of his heart both on and off the football field last Saturday night.

The Pulaski High school senior led the organizing of a fundraiser for childhood cancer research that was held during the Blue Devils varsity football homecoming game, pairing with the Florida-based nonprofit “Fourth and Gold Inc.,” that was founded by 2006 Pulaski graduate, Erin Tracy.

Pulaski claimed a 20-0 victory over Port Byron/Union Springs to finish the regular season with a 4-1 overall record, and Isgar helped raise significant money and awareness for the foundation operated by the close friend to his family.

“I want to see all these kids get a chance at life, and I know what it’s like when a family can’t afford all this stuff, so this really hit home for me,” Isgar said. “We’re trying to get these kids the help that they need and hoping one day that the organization can find a cure.”

Isgar first approached Pulaski coach Paul Monnat about eventually hosting the event during his sophomore year and maintained his desire to follow through for his senior community service project this fall.

The heartfelt task took on even greater meaning earlier this year for Isgar when his younger brother, Memphis, was born with an intestinal condition called Ileal atresia.

Isgar said that the health of his eight-month-old brother has improved significantly but he witnessed firsthand the financial burden that is often associated with such conditions.

The Blue Devils have worn wristbands with the phrase: ‘Mighty Memphis,’ displayed in tribute throughout the season.

“He’s doing really good right now, but our family is still struggling with all the medical bills, so personally, I know what that feels like and what the families are going through, and I want to help them get what they need,” Isgar said.

Isgar worked with Jill Truax, a longtime teacher and coach in the district, to begin organizing the event with Tracy over the past summer. The trio often met virtually via Zoom and frequently discussed various details over the phone.

Tracy has known Isgar for much of his life and has remained a close friend to his stepmother since relocating to work as a pediatric oncology nurse in Jacksonville, Fla., in 2010.

She said that the two often chat about football — comparing their favorite NFL teams between Tracy’s now-hometown Jacksonville Jaguars and Isgar’s beloved Philadelphia Eagles — but he has shown enthusiasm for the project the past two years and Tracy was proud to see him execute it.

“Anytime someone approaches me to do an event for Fourth and Gold, I’m going to be on board 99.9 percent of the time,” Tracy said. “As an owner of a foundation, you dream of nights like Owen was able to set up because it shows you how many support your mission.”

Players from both teams wore gold socks — displaying the ribbon color utilized to represent all childhood cancers — played with a gold ball, and wore decals for “Fourth and Gold Inc.,” on their helmets.

Merchandise was created, such as hoodies and T-shirts that displayed a gold ribbon on the jersey of an animated Pulaski football player, and donation booths were set up with “Fourth and Gold,” signs and banners prominently on display.

“To me it’s absolutely amazing,” Isgar said of the turnout and surrounding support. “This is just one big family and once one teammate goes down or needs help, they always rally behind you and will do anything to help you get what you need done.”

To date, Fourth and Gold Inc. has raised more than $80,0000 toward researching and funding a cure for childhood cancer.

Tracy launched the nonprofit organization in March 2018 in attempt to offset the gap in federal funding, citing that the National Institute of Health provides just four percent of all research funding to childhood cancer.

Isgar also provided a strong performance on the field, gaining 73 rushing yards and a touchdown on just five attempts while adding a catch for 30 receiving yards and providing a pair of tackles on defense.

“Owen is the pulse of this team, he’s the emotional leader in so many ways,” Monnat said.

“I couldn’t be prouder of this guy, he’s grown a lot in these three years, become a lot more mature,” he added. “When Owen gets his mind on something, he’s going to do it no matter what gets in his way, so I knew when he took the reins on this (fund-raiser), it was going to be awesome.”

Isgar, the third-year varsity senior who has shined mostly at running back and defensive back, has helped the Blue Devils secure the No. 2 seed for the Section 3 Independent Division playoffs, following through on another promise he made to Monnat as a sophomore rookie.

Pulaski will host Hannibal at noon Saturday for their first playoff game in at least five seasons and the winner will advance to the title game next week to face the winner of the Mexico-Fowler matchup.

“It’s really exciting to me,” Isgar said. “It’s everything I’ve ever dreamed of, to finally bring Pulaski back to the playoffs where they should be.”