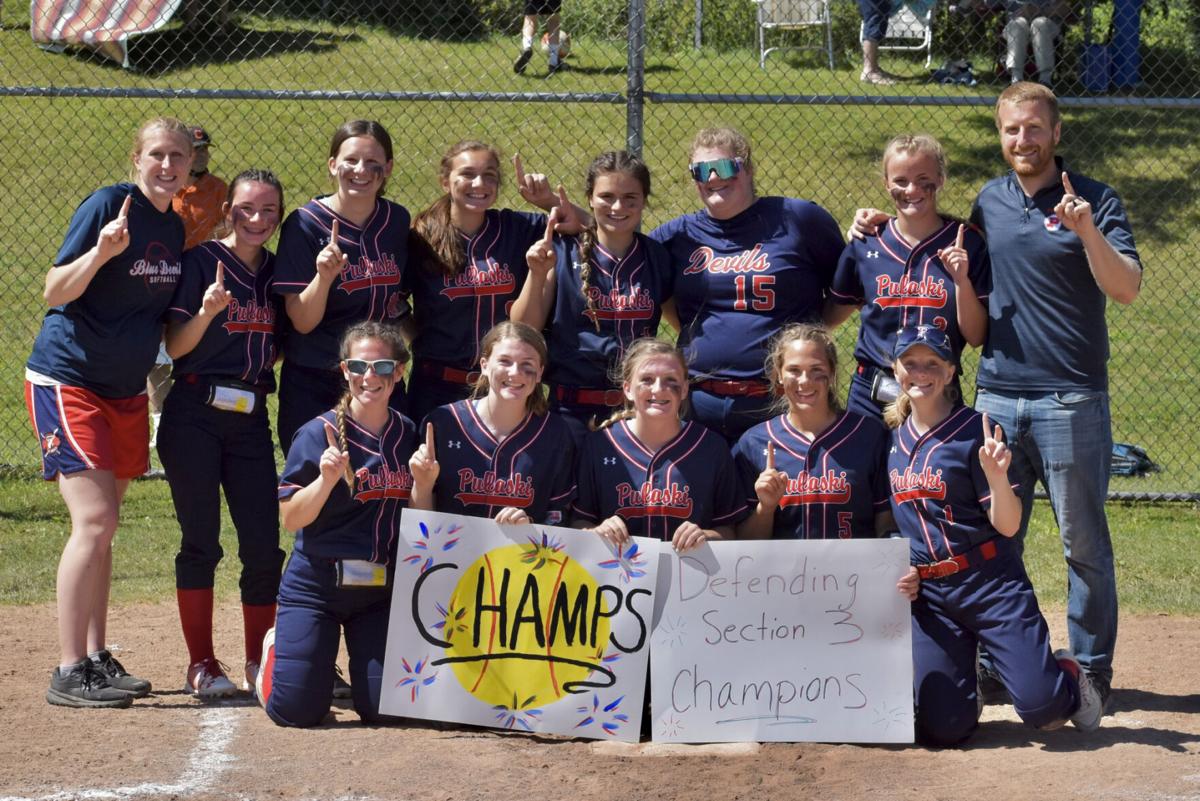 The Pulaski varsity softball team after winning the Section 3 Class C championship on June 12 with an 18-0 win over host and top-seeded Cooperstown High School. Provided photo. 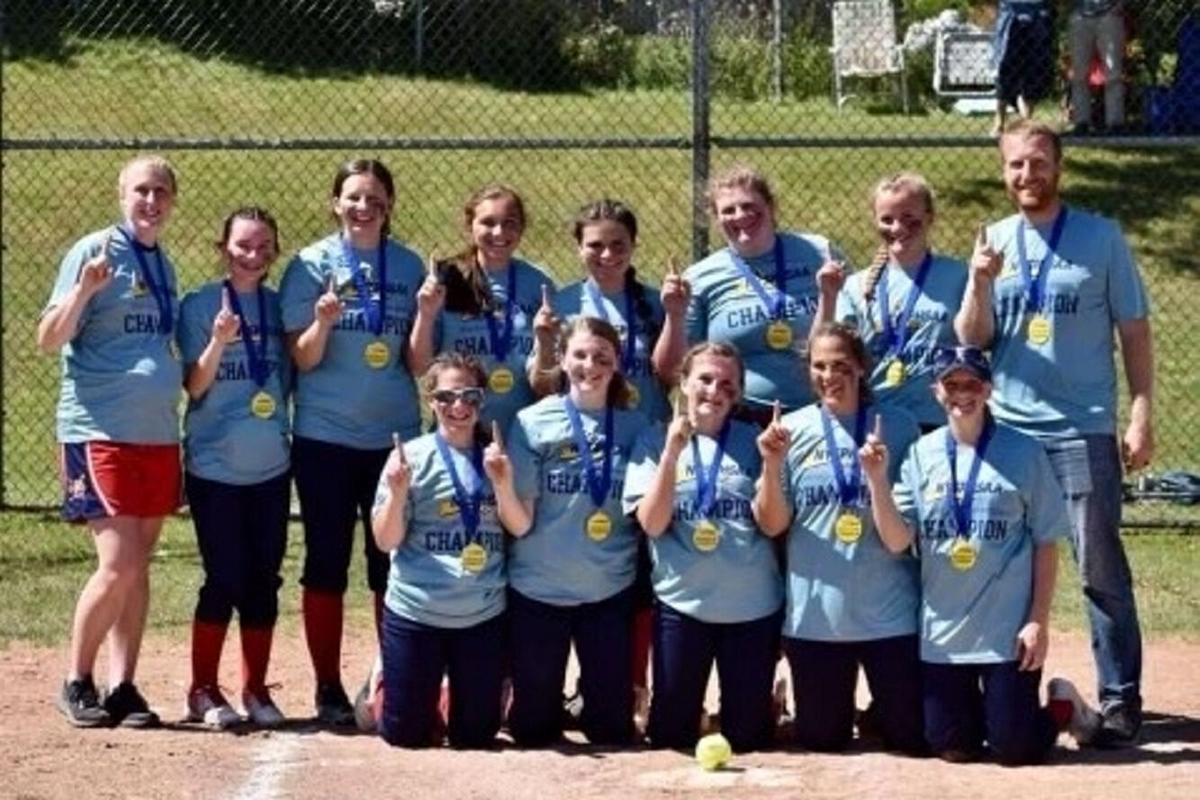 The Pulaski varsity softball team with championship medals and T-shirts after winning the Section 3 Class C title on June 12 with an 18-0 win over host and top-seeded Cooperstown High School. Provided photo.

The Pulaski varsity softball team after winning the Section 3 Class C championship on June 12 with an 18-0 win over host and top-seeded Cooperstown High School. Provided photo.

The Pulaski varsity softball team with championship medals and T-shirts after winning the Section 3 Class C title on June 12 with an 18-0 win over host and top-seeded Cooperstown High School. Provided photo.

PULASKI — With a different group surrounding them in celebration, the trio of returning Pulaski varsity softball teammates relived the same thrilling scene from two years prior after once again capturing the Section 3 Class C softball championship.

Emily Birmingham struck out the final batter to help third-seeded Pulaski topple the No. 1 seed and host Cooperstown, 18-0, on June 12 to repeat as sectional champions after winning the crown in 2019.

Birmingham was one of three players that contributed to both titles, joining Tessa Eisel and Pulaski’s lone senior, Clare Reynolds, who all spoke to the similar emotions evoked after the final out when the team swarmed the mound to hug and congratulate each other.

“I kept looking to Tessa and Clare and I would just smile at them because we were getting closer and closer to that last out, and once we got that last out, it was a lot of excitement,” Birmingham said. “It really brought me back to two years ago when we won sectionals, just all celebrating and hugging.”

Pulaski won its second straight and fourth Section 3 softball championship overall. Their previous title before 2019 came in 2008, when coach Leah LeBeau was a senior player on the squad.

They joined Class AA’s Cicero-North Syracuse as the only softball teams to successfully defend their Section 3 titles from 2019 after the 2020 campaign was canceled statewide due to COVID-19 concerns.

Reynolds, Birmingham, and Eisel were the only players remaining with championship experience and reveled in sharing the triumph with the team mostly consisting of sophomores and freshmen.

“I just remember catching the last pitch and realizing we won, and it was just unforgettable, seeing everyone smile and run to each other was such a good feeling,” said Isabelle Dobson, a first-year varsity sophomore.

The veteran trio were the first three to step to the plate in the sectional championship game and each reached base to set the table for a five-run first inning. Pulaski raced out to a 9-0 lead by the end of the third frame and never let up from their offensive onslaught.

Birmingham and the strong defense behind her did the rest as the junior struck out six and allowed just four hits while hurling seven shutout innings for the victory.

“I feel like we had some nerves the day before but once we got there, we just wanted to win, and we put our everything into it,” Reynolds said. “Scoring those first five runs just set the bar and from there, we just kept scoring.”

Junior Emily Birmingham and her freshman sister, Danielle, each drove in five runs to pace the power display, including a three-run home run by Danielle Birmingham to break the game open.

The Blue Devils posted a shutout in three of their four sectional playoff games and outscored their opponents by a combined score of 39-5. They finished with their highest run scoring total since claiming a 20-5 win over Cato-Meridian in the season opener on May 3 and closed with a 13-2 overall record.

“Once we won (the first two rounds), we had our momentum going and I think it fed its way to (the finals) Saturday,” LeBeau said. “Everyone woke up that morning and just had this feeling you get as an athlete and a coach that you were going to go in and win that game, and they made coaching very easy that day.”

Pulaski won their last nine games to close the season and thrived in the rapid pace of the sectional tournament compared to past years. LeBeau said the team focused on their hitting and coaches used their limited time to search for tendencies of opposing pitchers and teams throughout the tourney.

The brackets were completed in less than a week from the selection committee forming the pairings on June 6 to the title games on June 12. The Blue Devils won their four sectional games in a six-day span.

“There was no time to practice and prepare for whoever your first opponent was,” LeBeau said of the unique playoff push. “Part of the coaching side of things is going through and trying to scout, and we would stay up until midnight trying to figure out, what are some things that we could capitalize on from other teams. I also think if you’re a team that’s on a roll like we were, it plays in your favor, because we could keep our momentum going for five days instead of 10 or more.”

LeBeau pointed to the strong leadership of returning players for helping spark the sudden growth on a youthful roster.

Reynolds helped lead the charge as the only senior by keeping up with program traditions such as the ‘secret sister exchange,’ in which players draw names to give a small gift to a teammate each week and discover more about their personal interests.

The veteran trio also helped rejuvenate the team during a 30-minute practice discussion following a 6-3 loss to Port Byron on May 21 — their last setback before winning nine in a row to close the year — which LeBeau referred to as a rallying point.

“Being as young as we were, this just shows that it doesn’t matter where your team is at in the beginning of the season, if you keep going hard throughout, you’ll finish strong,” Reynolds said.

Reynolds capped off her four-year varsity softball career as a two-time sectional champion, while the rest of the rising unit is expected to return for a chance to defend their title after a more traditional summer of development and bonding opportunities.

“I think we formed a lot of strong connections with our younger kids this season and because of that, the future years are going to be strong, too,” Eisel said.