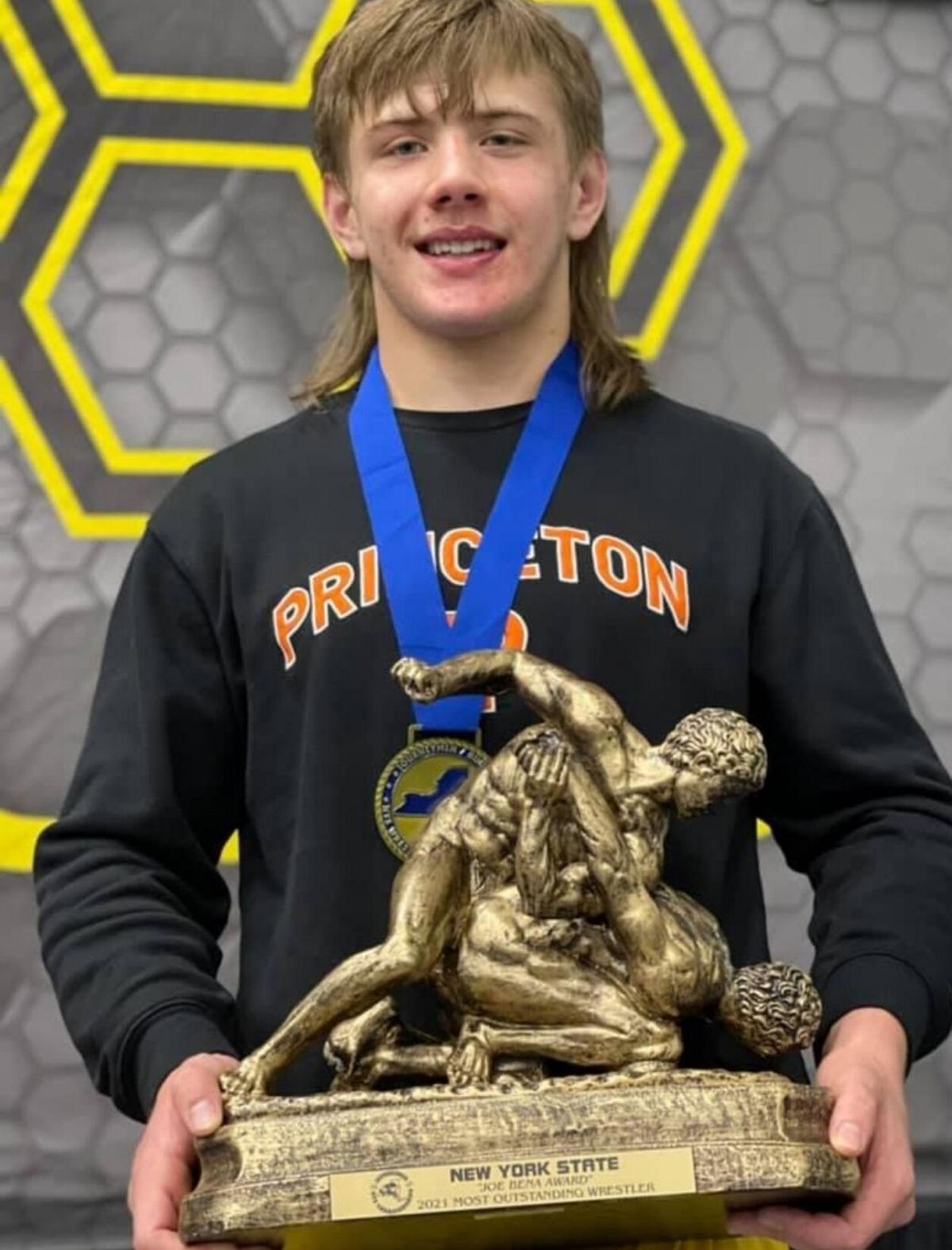 Central Square junior Kole Mulhauser with his Most Outstanding Wrestler trophy after winning the 182-pound title on April 3 at the Journeymen/Rudis state championships in Manheim, Pa. Provided photo. 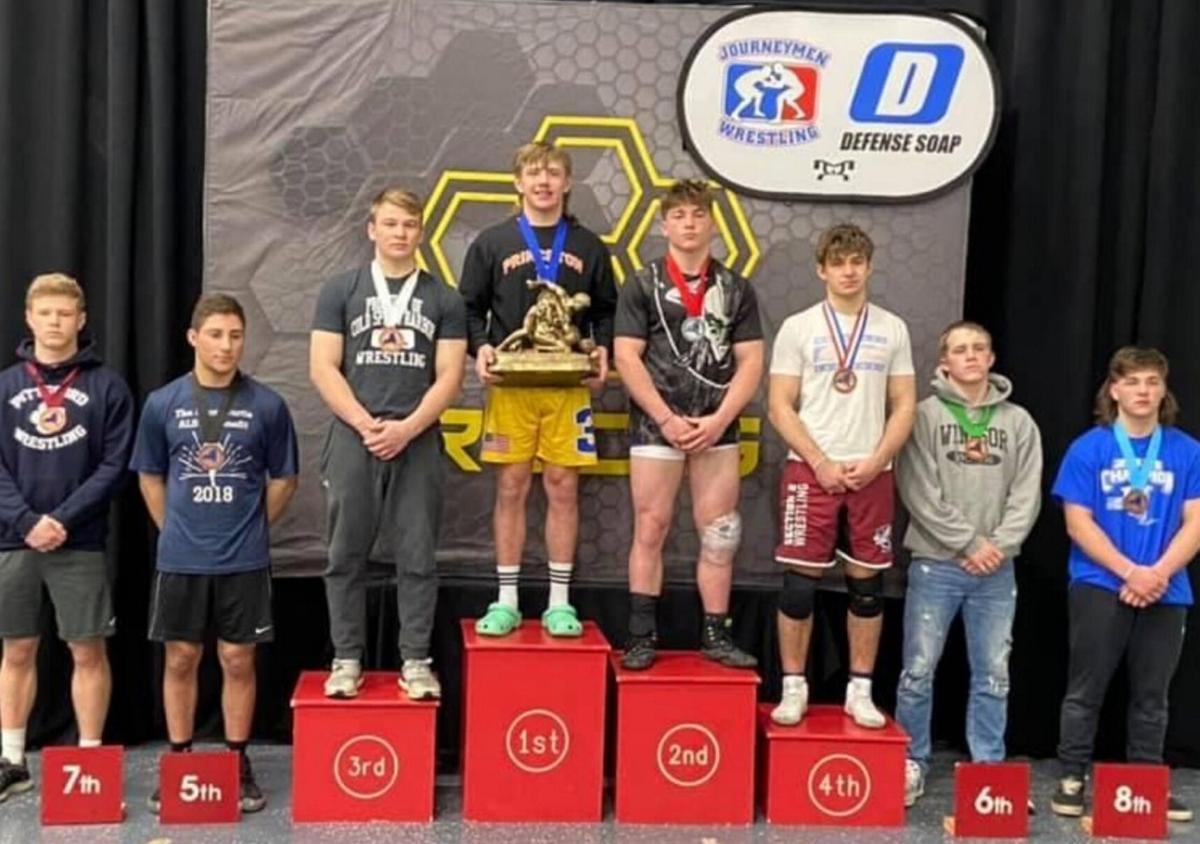 Central Square junior Kole Mulhauser, center, stands at the 1st-place position on the podium after winning the 182-pound title on April 3 at the Journeymen/Rudis state championships in Manheim, Pa. Provided photo.

Central Square junior Kole Mulhauser with his Most Outstanding Wrestler trophy after winning the 182-pound title on April 3 at the Journeymen/Rudis state championships in Manheim, Pa. Provided photo.

Central Square junior Kole Mulhauser, center, stands at the 1st-place position on the podium after winning the 182-pound title on April 3 at the Journeymen/Rudis state championships in Manheim, Pa. Provided photo.

CENTRAL SQUARE — Kole Mulhauser has achieved a pair of elusive career goals as a junior despite the delayed start to the high school wrestling season for Central Square and other Section 3 teams.

Mulhauser was recently crowned the 182-pound champion and named Most Outstanding Wrestler at the Journeymen/Rudis State Championship Tournament on April 3 in Manheim, Pa. This past fall, he committed to wrestle for Division I Princeton University of the Ivy League upon graduating from Paul V. Moore High School next year.

Mulhauser fulfilled his two long-held objectives to cap off a year in which he committed fully to the sport through the COVID-19 pandemic, frequently traveling out of state to train and compete while working out relentlessly to jump from his 145-pound stature as a sophomore.

“Kole took this situation with things getting shut down and strictly devoted himself to becoming a better wrestler,” said Central Square varsity wrestling coach, Tim LaRose. “He spent countless hours working out, he and his parents driving long hours to find different partners to make him better. It’s a magnitude of different things, and he definitely took this negative thing and made a positive for himself.”

Mulhauser had qualified for each of the last three state tournaments, all held at the Times Union Center in Albany, and entered the Journeymen/Rudis event earlier this month as the top seed at 182 pounds. He was the sixth-ranked wrestler in his weight class nationally by FloWrestling.com prior to the event.

The competition was planned as an independent replacement for the NYSPHSAA Tournament that was canceled for 2021 due to COVID-19 concerns. The Redhawks are among a handful of Section 3 teams that delayed the scholastic wrestling season to the spring with practices slated to begin next Monday.

Mulhauser went 5-0 at the tourney to sweep his weight class of 21 top wrestlers from around the state en route to the gold medal and MOW honors. He was notified of the latter award while standing on the podium to celebrate his finals victory.

“I wasn’t really thinking much in that moment and it all kind of hit me afterward when I was on the podium,” Mulhauser said. “It was really cool just to think about how I was a state champion, and I wrestled that good that I could earn the Most Outstanding Wrestler.”

Mulhauser entered with an official career record of 151-21 since moving up to varsity in 7th-grade, according to stats on cnywrestling.com. He placed third in the state tournament at 145 pounds as a sophomore last year, qualified at 120 as a freshman and 106 as an 8th-grader.

“I was just happy that I could compete and get a state title for this year,” Mulhauser said. “I was excited to show how hard I worked in the offseason and wanted to show up and give my best performance.”

The Central Square junior spent much of the past year training despite COVID-19 shutdowns limiting options compared to his usual busy offseason of camps and showcase events.

Mulhauser competed in about one tournament per month, traveling with a parent as far as Florida and Wisconsin or to neighboring states to find available tournaments or elite sparring partners.

He upped his free weight training to at least six days per week and said he increased his portions to bulk up to the 182 class.

“I was really consistent on that because I knew I wanted to grow and get stronger,” Mulhauser said. “I didn’t really do anything else (differently), just ate a lot.”

Princeton showed interest in Mulhauser late last season and he was in frequent contact with coaches throughout last summer. He made an unofficial visit to see the campus in Princeton, N.J., last September and said he verbally committed to the program soon after.

The Tigers have won 12 Ivy League championships, most recently in 2020, and have been represented by at least one individual at the NCAA Championships every year since 2013. The event was not held last year due to the coronavirus. Mulhauser is a high honor roll student and has yet to declare a major.

“To have the entire package is quite impressive, and that’s why he’s going to a school such as Princeton,” LaRose said.

Mulhauser was one of more than 400 participants overall, spanning all 13 Sections in the state, who either kicked off or concluded their scholastic wrestling season at the Journeymen/Rudis state championships. He was one of 10 wrestlers from Oswego County teams invited to compete.

“It was great for the kids to have that opportunity to have a tournament of that level, especially during this time, and Kole going there and doing as well as he did and as dominant a performance as he showed is great,” LaRose said. “I’m really happy that he had that opportunity.”