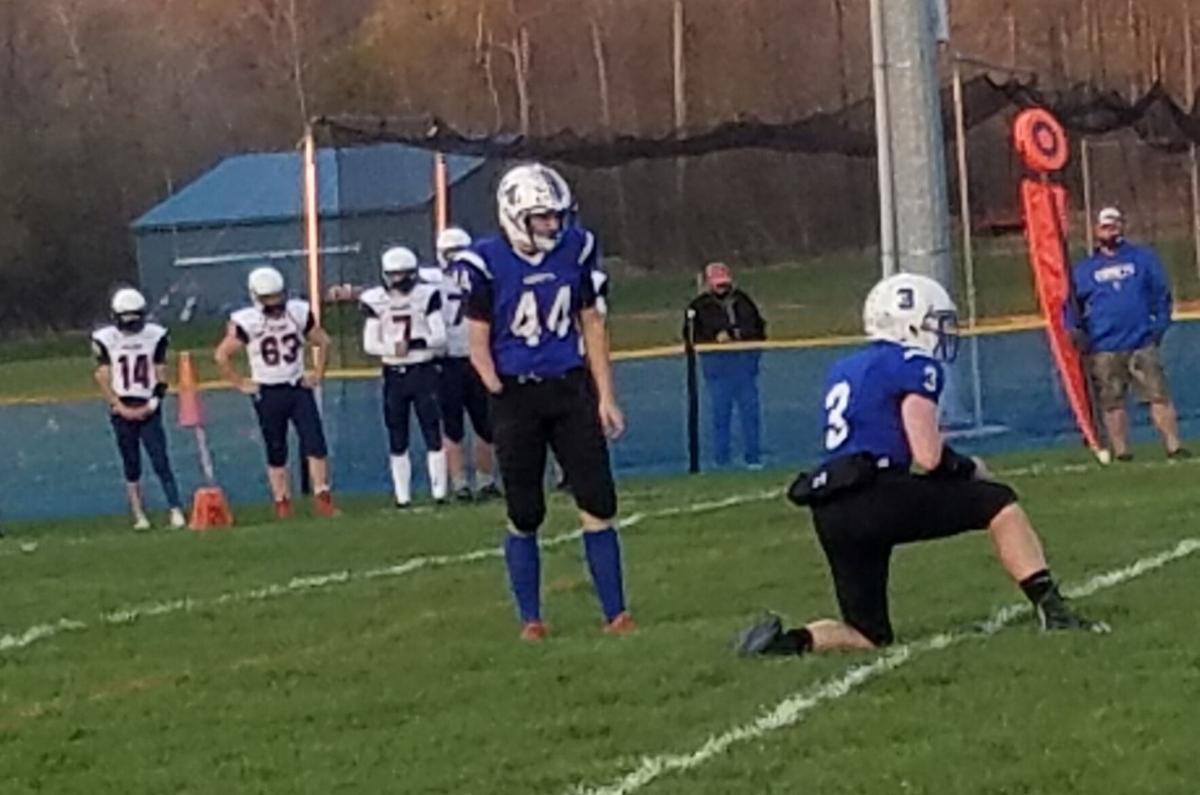 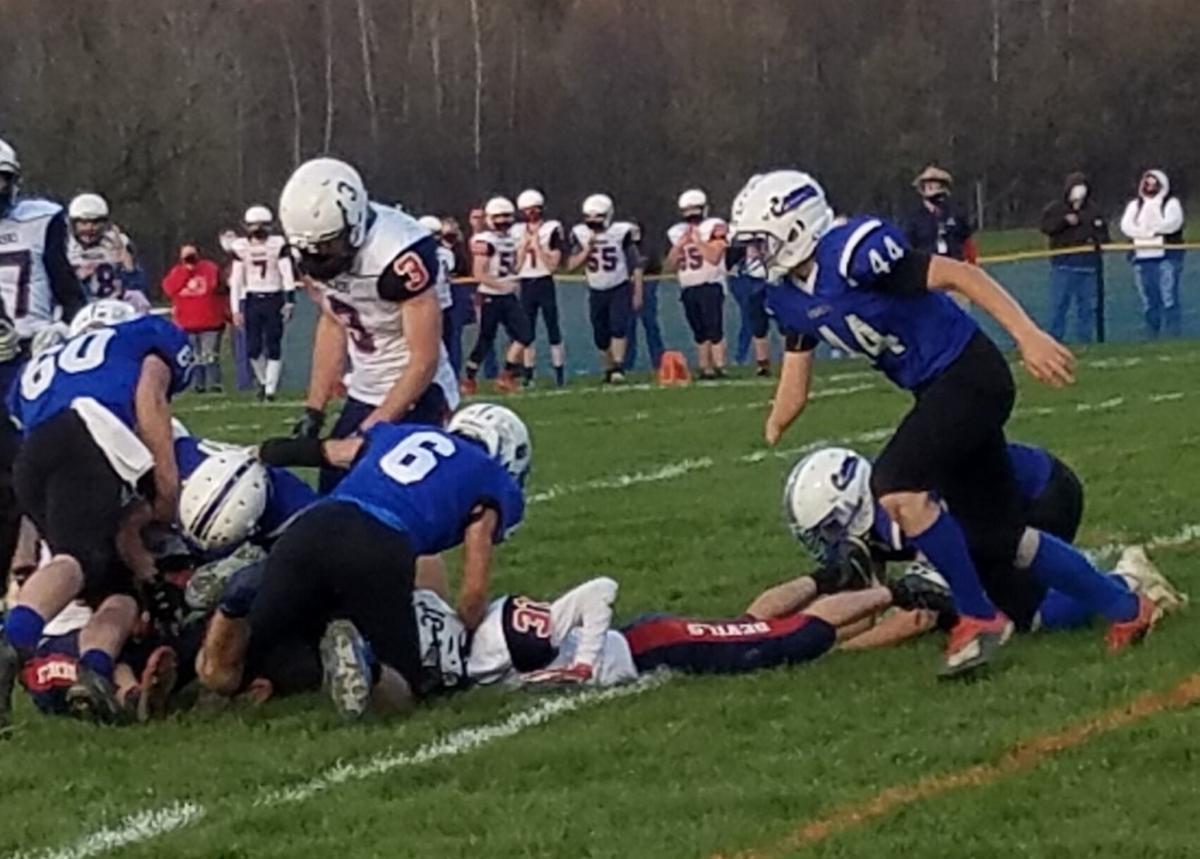 Sandy Creek senior T.J. Reff, right, runs in for the tackle after a kickoff for the Comets against the Pulaski Blue Devils in a varsity football game on April 23 at Sandy Creek High School. Josh St. Croix photo. 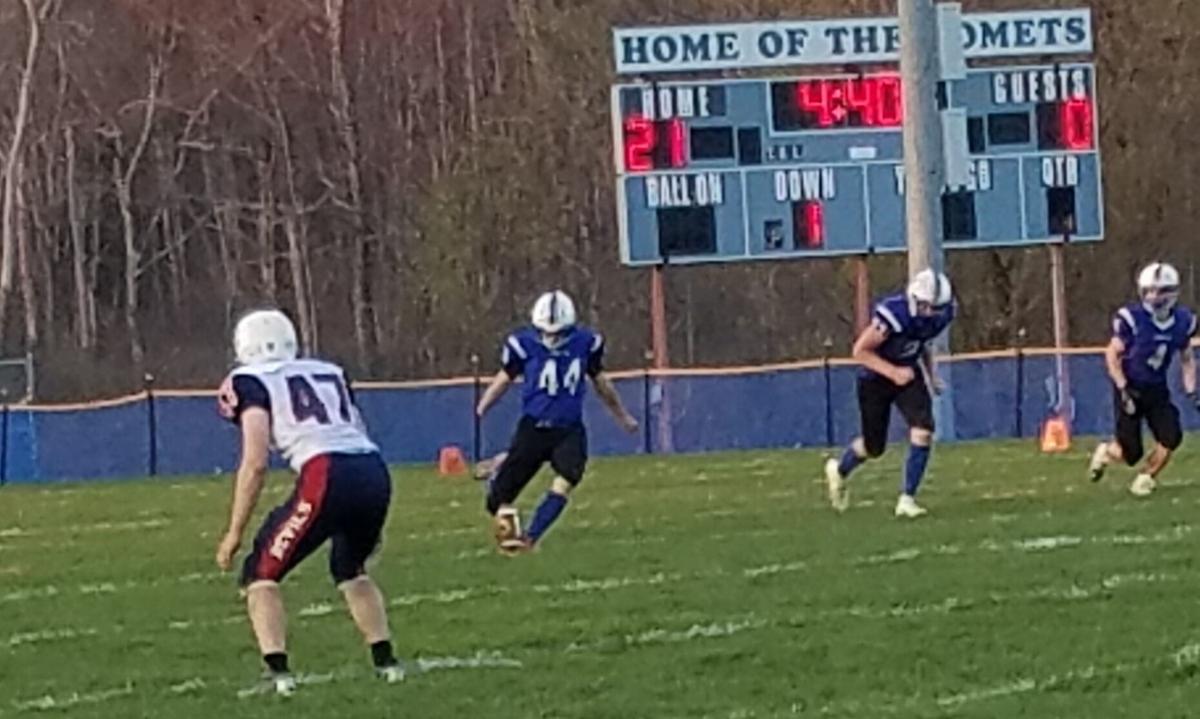 Sandy Creek senior T.J. Reff (44) kicks the ball off for the Comets against the Pulaski Blue Devils in a varsity football game on April 23 at Sandy Creek High School. Josh St. Croix photo.

Sandy Creek senior T.J. Reff, right, runs in for the tackle after a kickoff for the Comets against the Pulaski Blue Devils in a varsity football game on April 23 at Sandy Creek High School. Josh St. Croix photo.

Sandy Creek senior T.J. Reff (44) kicks the ball off for the Comets against the Pulaski Blue Devils in a varsity football game on April 23 at Sandy Creek High School. Josh St. Croix photo.

SANDY CREEK — T.J. Reff was discussing the likelihood of a lost soccer season with his mother, Lisa, when he suggested an alternative that made her jaw drop — becoming the kicker for the Sandy Creek football team.

Reff followed through and recently finished his foray into football by converting 13 extra point kicks and one field goal in five games, helping the Comets to a 3-2 overall record to finish the Fall II campaign.

The Sandy Creek senior addressed the huddle at the end of the Comets’ 21-0 victory over the Pulaski Blue Devils to end the season last Friday night, thanking the unit for welcoming him into the fold after the school canceled the longtime soccer goalie’s beloved sport due to low participation numbers.

Reff’s heartfelt message came moments after he shared a hug with team captain and fellow senior, Zach Paternoster, as the Comets celebrated the shutout win on their home field.

“It was life-changing,” Reff said of the experience. “Throughout high school, it’s been like a banter between the football and soccer teams, which one is the better sport or better team. I love soccer and will play it hopefully until the day I die but coming out here and seeing the type of brotherhood it is, and just how supportive everyone is, it’s something I’ve never experienced before and I’m glad I got to.”

Reff was born with Poland’s Syndrome, a condition in which the umbilical cord was wrapped around his right hand prior to birth, thus his fingers never fully developed, but he has full wrist and bone maturation in both arms.

He worked to become a standout goalie in Section 3, garnering Frontier League All-Star honors and collecting more than 120 saves as the full-time starter as a junior last year. He shared time in goal for his first two varsity seasons and has played a variety of positions in offseason club soccer.

Reff also competes in track and field for the Comets and played Little League baseball and youth basketball in the district.

Lisa Reff was admittedly shocked when her son suggested football for the first time — he is one of six siblings that all play soccer in the self-described ‘soccer family,’ — but was instantly on board.

“We’ve always been, if you want to try it, let’s do it,” Lisa Reff said. “I didn’t have any hesitation, but he was funny because I was like, well you should try to be a receiver, and he said: ‘No, because then I’ll get tackled.’ He was perfectly fine and happy to be the kicker, and being the soccer goalie, he did all the goal kicks and things like that.”

T.J. Reff rushed upstairs from the table where he and his mom spoke about their Fall II options last month and sent an email to Sandy Creek varsity football coach, Mike Stevens. Reff asked if their squad could use a kicker if the school was not able to field their combined soccer team with Pulaski.

Reff said that he and a friend from the neighboring district remained in constant contact and each were trying to recruit classmates at their respective schools up until the day Fall II practices started.

Stevens, who is also the athletic director at Sandy Creek, said that each school had about four players signed up and were not able to add enough interest to field the boys soccer team for Fall II.

Stevens gladly accepted Reff’s football proposition and helped the senior begin to adjust during the first practice inside the gym while snow covered the fields in March.

Reff recalled the entire atmosphere being new and intriguing on the first day of practice, even stopping to look around during stretches and warmups. He then quickly started studying for his new approach.

“The first time I was kicking, there was something weird about it,” Reff said. “I just kept kicking like a soccer player, twisting my hips a lot and putting spin on the ball, and Mr. Stevens came over and said: ‘You just need to kick it straight, we don’t need it high, we just need it straight.’ So, we lined up in the gym and I imagined what the uprights would look like, and after some time it just started to click.”

Stevens recalled Reff asking to take a ball home to practice after the first day of team workouts, a theme that continued during the condensed preseason. Reff often brought the football into the batting cages behind the school to work on his form and get a feel for its shape compared to the round soccer ball. “The shape of the ball makes it so hard,” Reff said. “There’s no sweet spot, no center spot that I can target and hit (like a soccer ball), it’s just blind firing every time and I just had to get in a rhythm.”

Reff relied on his pure leg power to help him through the necessary tweaks to his kicking style and drew upon the mental strength gained from playing goalie to perform in pressure spots as the kicker.

Reff spoke to the similarities of being a goalie in soccer and kicker in football. Both positions are often isolated from the other 10 players on the field, and each requires a similar level of patience and trust in teammates.

“That’s where a lot of the mental aspect came into it,” Reff said. “Every time I would kick, I’d have to keep a calm head and let the other guys do what they do best. If I messed up in football, it was a lot harder, because I would be on the sidelines having to think about it, versus as in soccer as a goalie, I just had to forget about what happened and move on immediately.”

Reff was among the most animated players on the Sandy Creek sidelines as one of four seniors on the squad, constantly encouraging the offense and defense from the sideline while working to hype his teammates when they came off the field. The scene was hard to imagine just a few months earlier when the decorated senior goalie first considered playing football.

Reff described the excited reaction of his teammates congratulating his first of four extra point kicks in the season-opening 28-0 victory over Oswego as unlike anything he has experienced.

Stevens joked that the longtime goalie opted to play football to record points during his high school sports career that had previously been devoted to preventing scoring.

“When he first went out there, he was pretty nervous, pretty scared,” Stevens said. “Then he hit that first one out in Oswego and our team came unglued, and it was just amazing from there.”

“He’s hard-working and he took it very serious, he doesn’t take failure,” Stevens added. “In the end it is bittersweet because I wish we could have had soccer for him, but the experience I think he has gained has been unreal and the impact on our team has been pretty cool.”