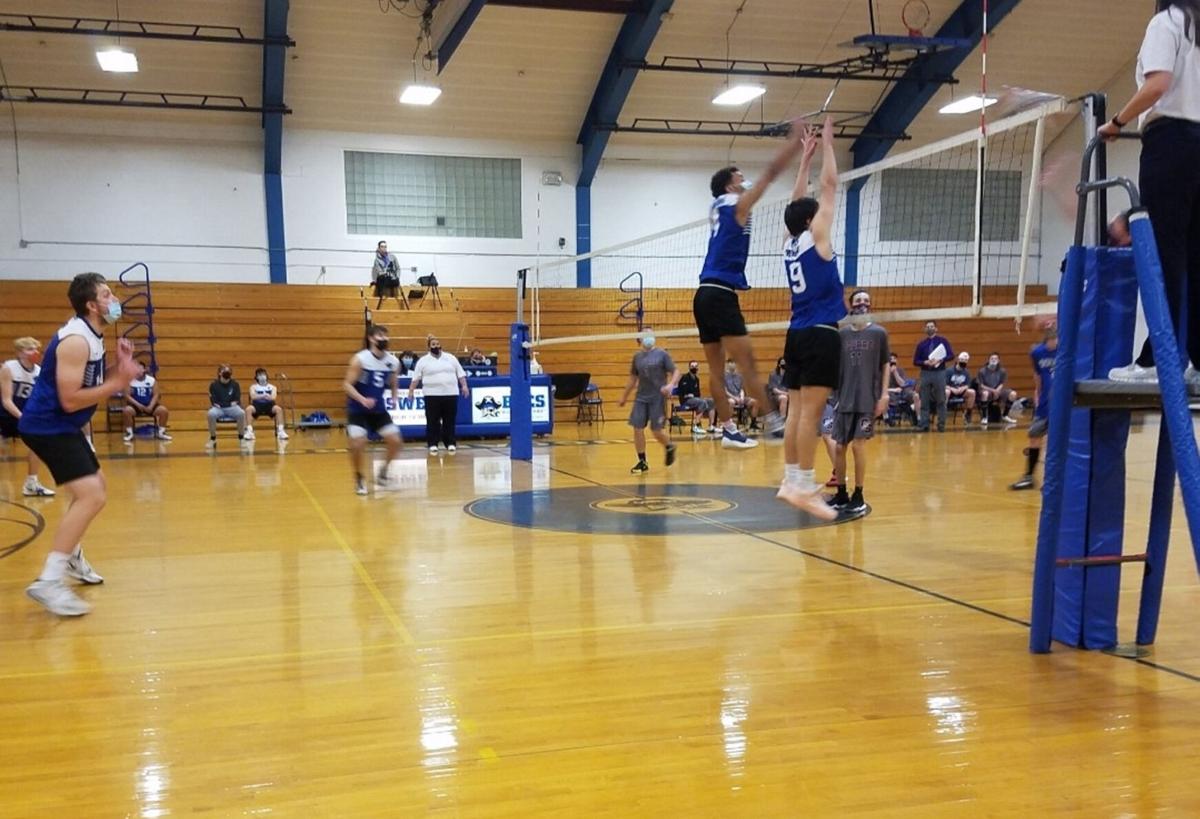 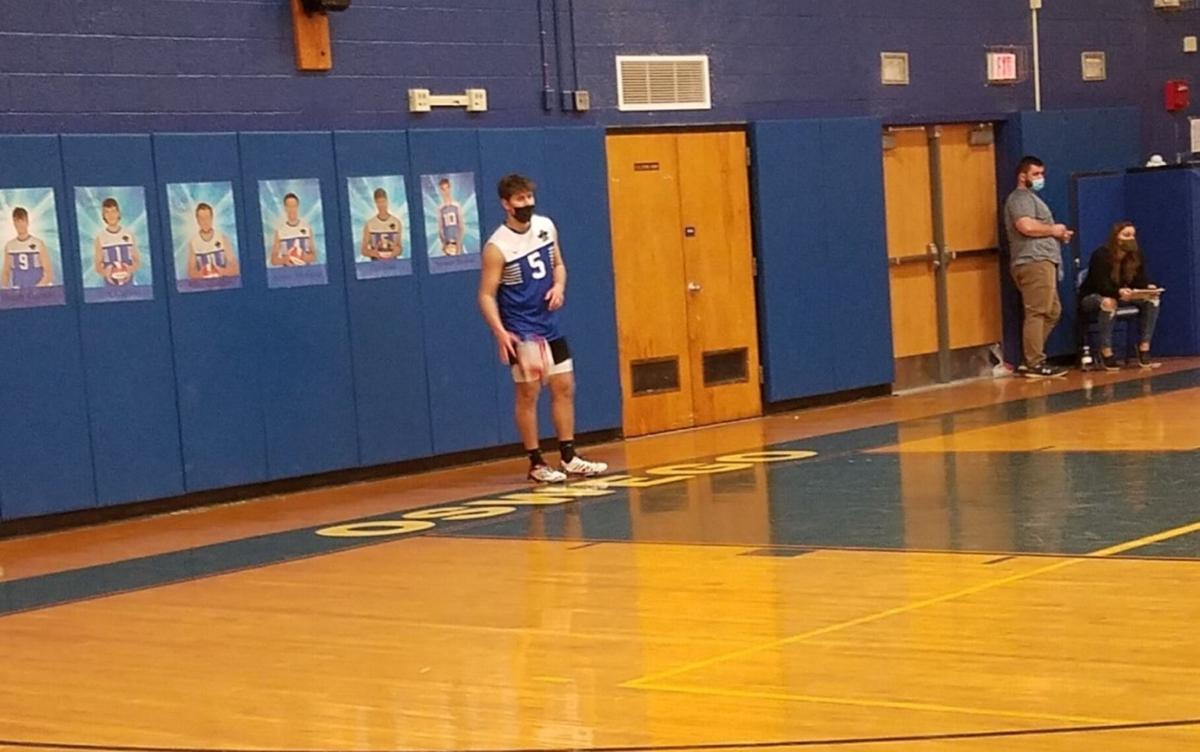 Oswego’s sixth-year senior, Cole Pratt, prepares to serve the ball with photos of he and his senior teammates on the wall behind him on April 6 at the Leighton Elementary gym. Josh St. Croix photo. 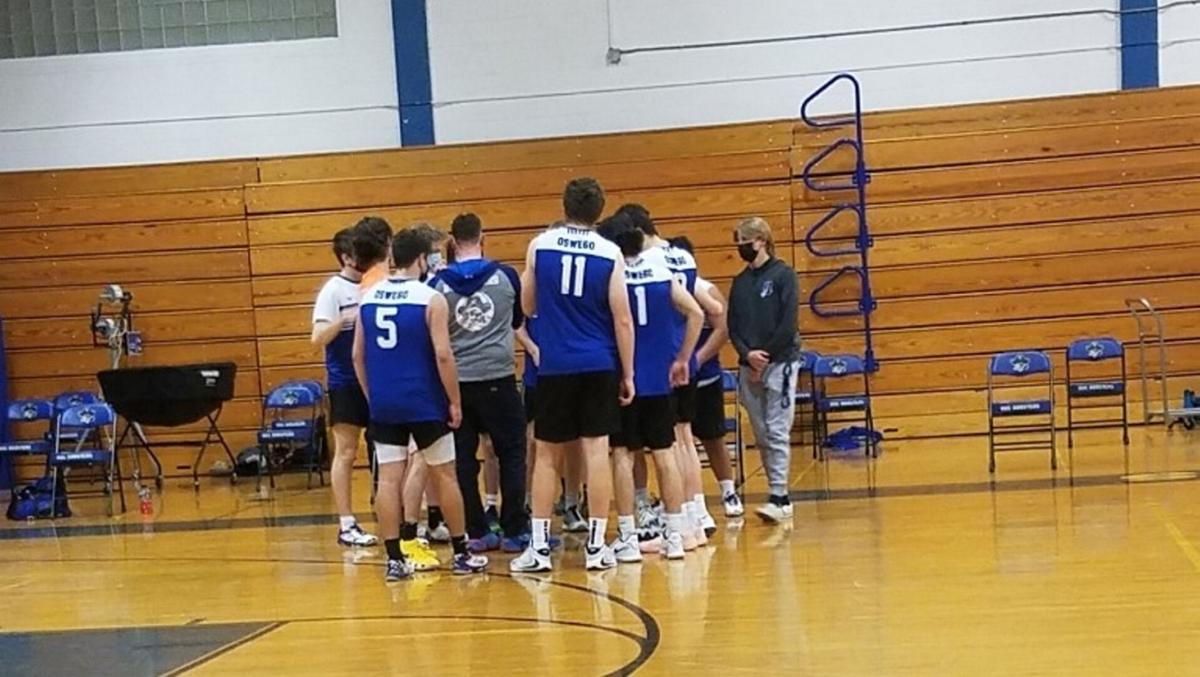 Oswego’s sixth-year senior, Cole Pratt, prepares to serve the ball with photos of he and his senior teammates on the wall behind him on April 6 at the Leighton Elementary gym. Josh St. Croix photo.

OSWEGO — Cole Pratt first learned to play volleyball from his former teacher and current Oswego High School boys varsity coach, Eric McCrobie, when he stayed after school for help with homework and asked about the sport after completing his assignments.

Pratt is one of seven seniors whose career was celebrated during Oswego’s senior night on April 6 at the Leighton Elementary School gym, a group that started as the first sixth-grade class that McCrobie mentored after accepting the position as Buccaneers varsity coach.

McCrobie took extra delight in the 3-0 sweep of Central Square as he watched the court filled with seniors at all seven spots for all but a few points during the victory. Oswego entered the week with a 3-4 overall record during the Fall II campaign after the season was delayed from last fall due to COVID-19 concerns.

“It was fun, it was emotional, and it was cool to sit back and see how many of those guys have stuck with it, how many have enjoyed it, and how many of them have grown from the lessons that we’ve learned together every single season,” McCrobie said.

Pratt is the longest-tenured varsity player in his sixth season for the Buccaneers. He was one of the initial participants that helped spark interest among his classmates.

The group was collectively recognized prior to the match and introduced to the limited crowd, most being escorted by parents or other family members. Their photos were placed on the wall behind the Oswego side of the court. The Buccaneers won on senior night for the first time in three seasons.

“Senior night is always sad but it’s fun at the same time, and I’m glad we could get all the seniors out on the court today,” Pratt said. “We didn’t play the best, we could have played better, but we got the win. … We’ve struggled in the past winning on senior night, and I know it was hard on the seniors losing that game last year, so it felt good to get a win.”

The Buccaneers had won six straight Section 3 championships from 2013-18 before losing to Jamesville-DeWitt in the 2019 Division II finals.

Pratt and other veteran players were initially aiming to avenge that loss entering the fall but remained eager to return to the court despite the postponed slate and cancelation of postseason tournaments.

“There’s no sectionals this year obviously, so we’re all out here playing for pride, but we’re all grateful that we can even play this year,” Pratt said. “It didn’t matter if it’s a short season or what it looked like.”

He added: “Every year it’s like family, that’s why it feels rough to have to step away here soon as a senior. It’s always a great time being with the team, and the coaches and staff are amazing.”

McCrobie has witnessed positive energy around the program despite the condensed season void of many annual traditions. The team typically stops for a meal and spends time talking after every away match, and arranges other regular bonding activities, such as team beach volleyball parties in the summer.

Such events developed and strengthened the chemistry of the senior class throughout the years, McCrobie said, which helped the unit endure the long wait to cap off their respective high school careers together.

“There was a lot of sitting around in the fall and the winter and thinking about how this is going to be tough,” McCrobie said. “I felt bad for Cole and (Douglas), and all the seniors, it was an unfair thing that they had no control over, so I’m just extremely thankful for the opportunity they got to play this season.”