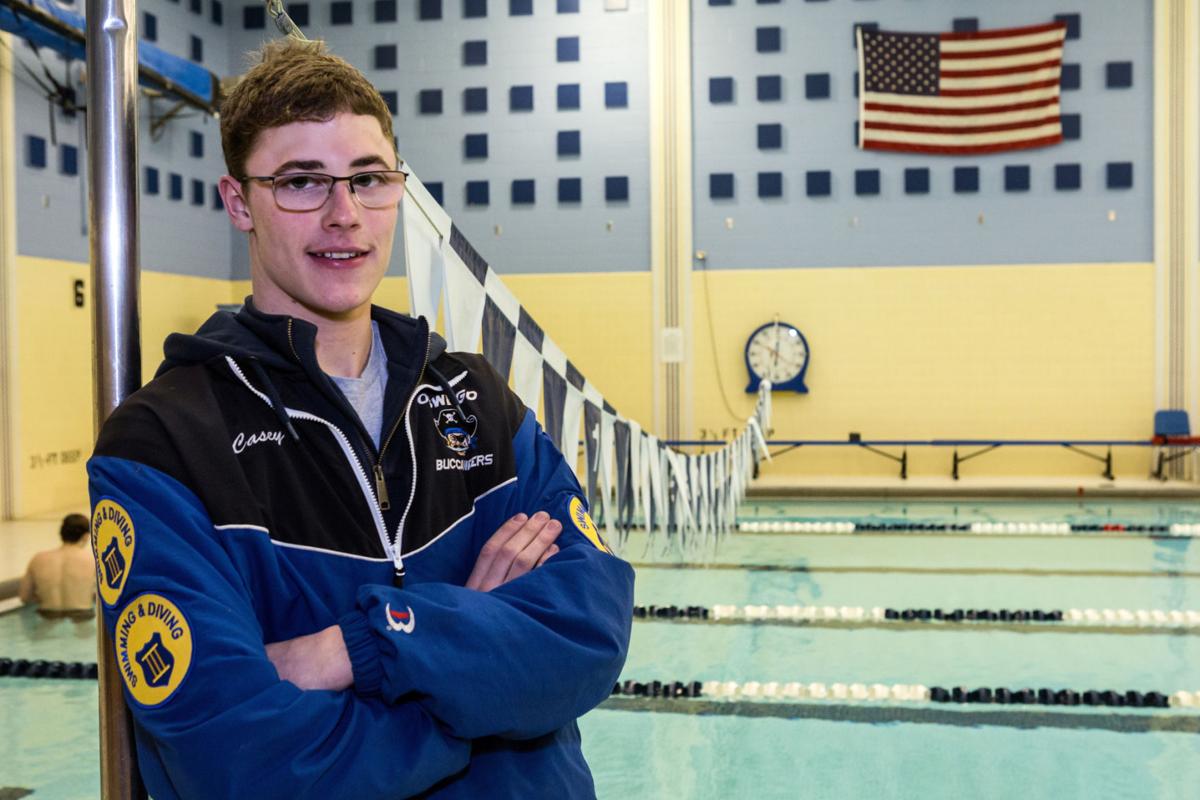 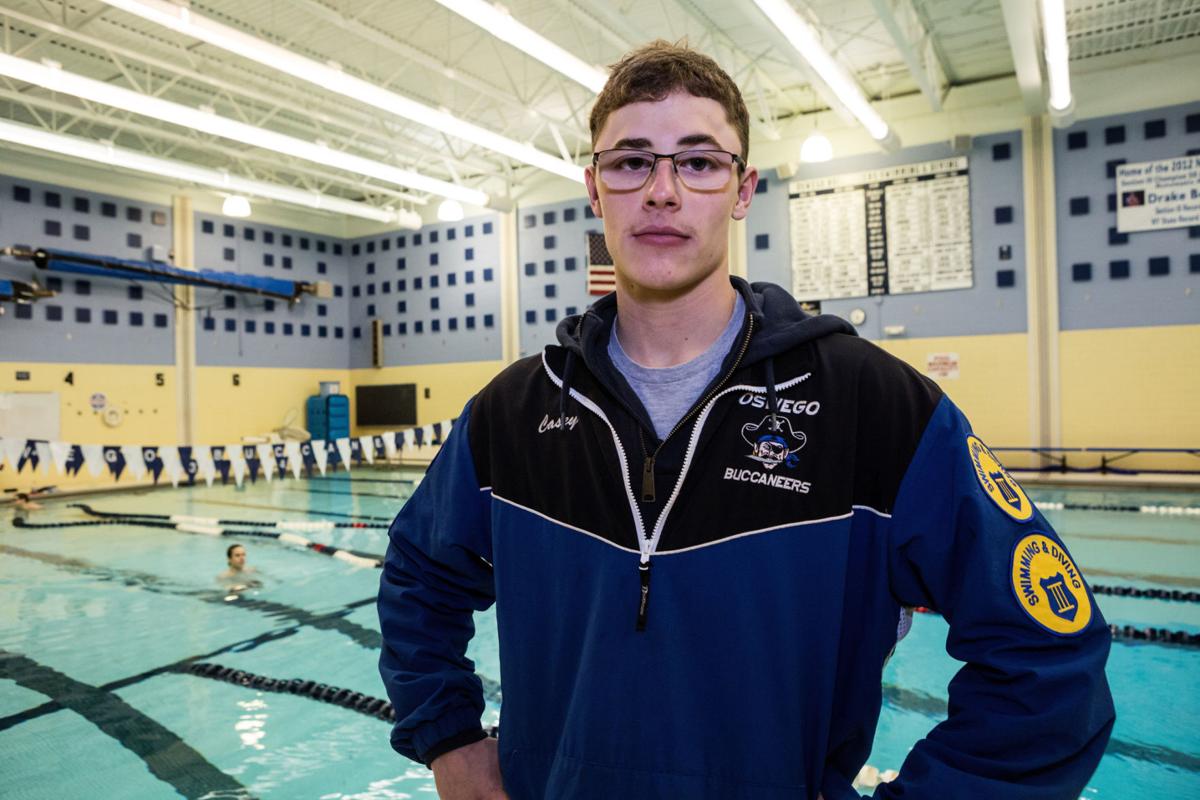 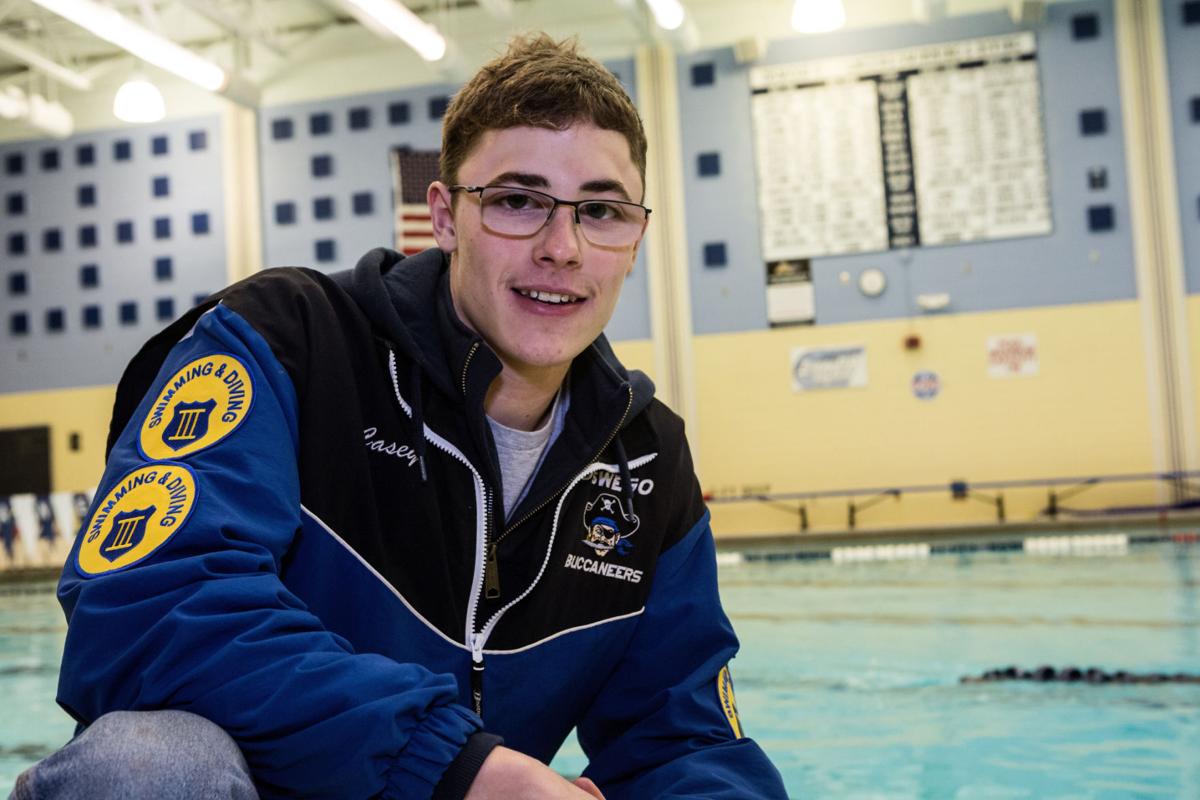 OSWEGO — Casey DeLapp has adopted the mentality that he plans to take into the United States Marine Corps during a standout senior season for the Oswego varsity boys swimming team.

The fifth-year varsity mainstay has mastered a self-driven approach after the majority of swimmers he started competing with graduated last year, and has worked to become a disciplined and determined leader for a rebuilding Buccaneers squad.

“I had to push myself to get to where I wanted to be, so it’s been kind of a grind mind-set all the way through the season so far, just head down and work hard,” DeLapp said after a recent practice. “I like the progress made thus far, and I’d like to continue working and see where we can take it.”

DeLapp plans to enlist in the marines when he graduates in June. His older brother, Johnny, is currently serving in the same branch of the military.

Oswego coach Josh Lerch said that he has witnessed a noticeable maturation in DeLapp during the past year in several areas. Lerch said DeLapp has been strict about his diet compared to past years, became self-motivated with no older swimmer on the team to chase, and has routinely displayed the leadership qualities to help guide developing swimmers in the program.

“He’s really come out as a strong leader this year,” Lerch said of his senior captain. “He has an older brother in the military and I think he really respects the kind of things that his brother is doing and I think he tries to really embrace that and be a leader here, set a good example for the guys and build the team up.”

DeLapp — whose sole athletics focus is swimming throughout the year — placed second in the 200 free and third in the 100 free at last year’s Section 3 Class B championships, and was named Co-Swimmer of the Meet. He also helped the Buccaneers win the 200 and 400 free relay events.

DeLapp overcame a shoulder ailment to start the year, which Lerch attributed to his heavy training schedule during the past offseason in hopes of following up on his breakthrough campaign.

“I think he’s right where I want him to be as far as competitions, he’s faster now than he was at this point last season, he’s had some great races, and there have been some strong sprinters that Casey has been lucky enough to race so far, and he’s measured up well,” Lerch said. “We’re excited to really start kicking into some stronger training now leading into sectionals.”

DeLapp — the son of John and Theresa DeLapp — grew up swimming frequently in Lake Ontario at his family summer camp, and took up the sport competitively with the Oswego Lakers Swim Club around the age of eight. DeLapp recalled attending his first club meet with his younger sister, Sydney, who is a two-time state qualifier for the Oswego girls team and reached states in the 200 free relay and 100 free as a sophomore this past year.

“Our parents took us to a club meet, I think it was at Jamesville-DeWitt or something, and we both just fell in love with it that day,” Casey DeLapp said. “It was kind of meant to be for us I guess.”

He added: “I tried just about every sport as a kid and I liked swimming because it’s head-to-head competition and it’s undisputable (results).”

DeLapp said that he and his sister have been supportive of and competitive with each other throughout their respective standout swim careers, both of which have been molded by Lerch, who coaches the Oswego boys and girls varsity teams and is active in area youth swimming clubs.

“It’s very motivating when I can tell him: ‘Hey, your sister would go this time.,’” Lerch said. “So then, he’ll make sure we’re trying to go a lot faster than that and make the adjustments.”

Their older brother, Johnny, opted to play hockey during his high school sports career. The DeLapp family remains active outside of the school season and have competed in “Tough Mudder,” races together while spending much of their summer bonding time in the lake.

“I’ve had a lot of people help me out with coaches and teammates, (Lerch) is an incredible coach, and everyone I swam with all the way up through have pushed me,” DeLapp said. “My family has always been an incredible support, and I think that has a lot to do with the success that I’ve been able to have.”

DeLapp is an enthusiastic member of the wielding program at CiTi BOCES and spends much of his free time training and competing in club swimming tournaments with the Lakers.

He was described as patriotic with an irreplaceable sense of humor by Lerch, who said most of the emails he receives from DeLapp are listed with the subject line: “‘Merica,” regardless of the content.

DeLapp and fellow captain Josh Evans are the only seniors on a roster with just three total upperclassmen. The Buccaneers entered the week with an 0-8 record in dual meets after graduating several standouts from a squad that placed fourth overall in the Section 3 Class B championships last year.

“We have a great group of guys this season and I’m blessed to be one of the captains,” DeLapp said. “The support system is fantastic, there is a lot of heart on this team. We lost a couple strong guys from last year but the spirit is there on this team and it could still be a good season. I’d like to see where it goes.”