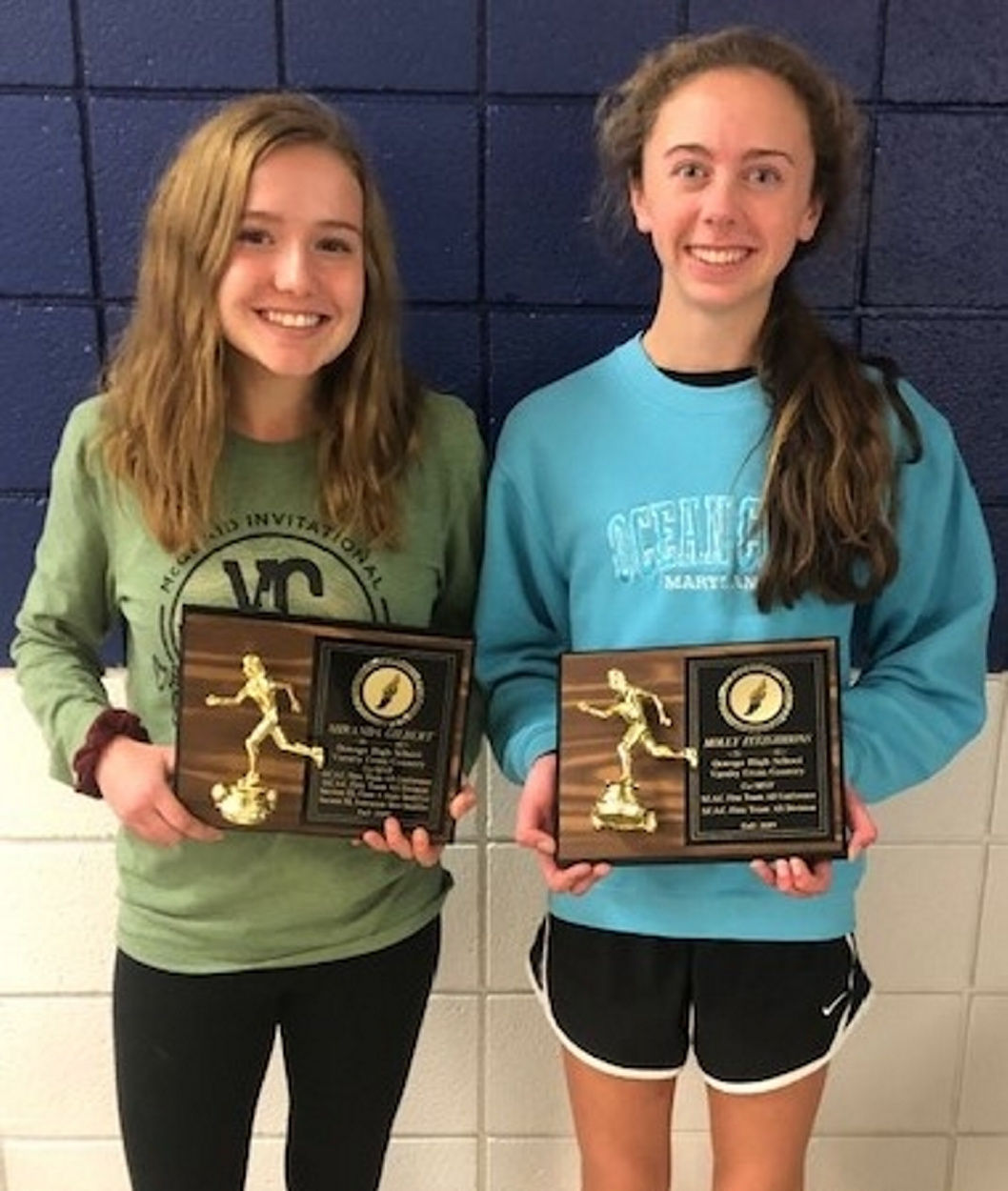 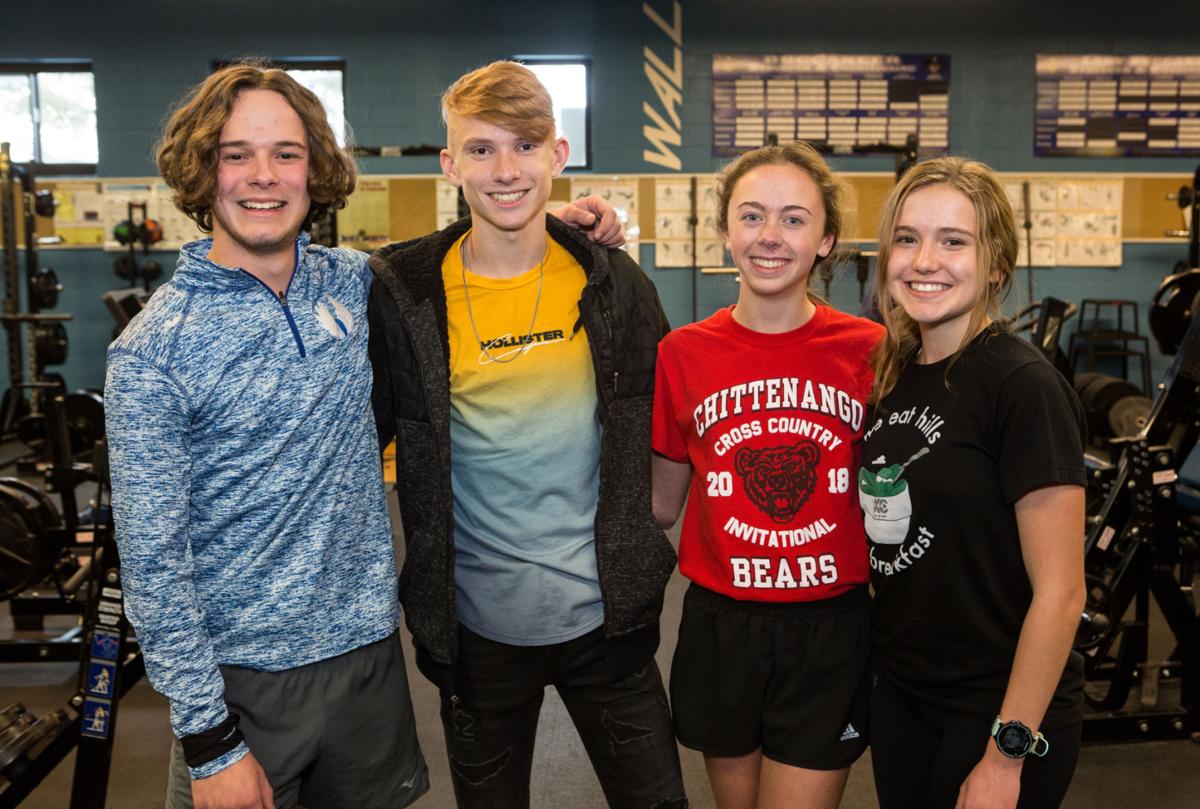 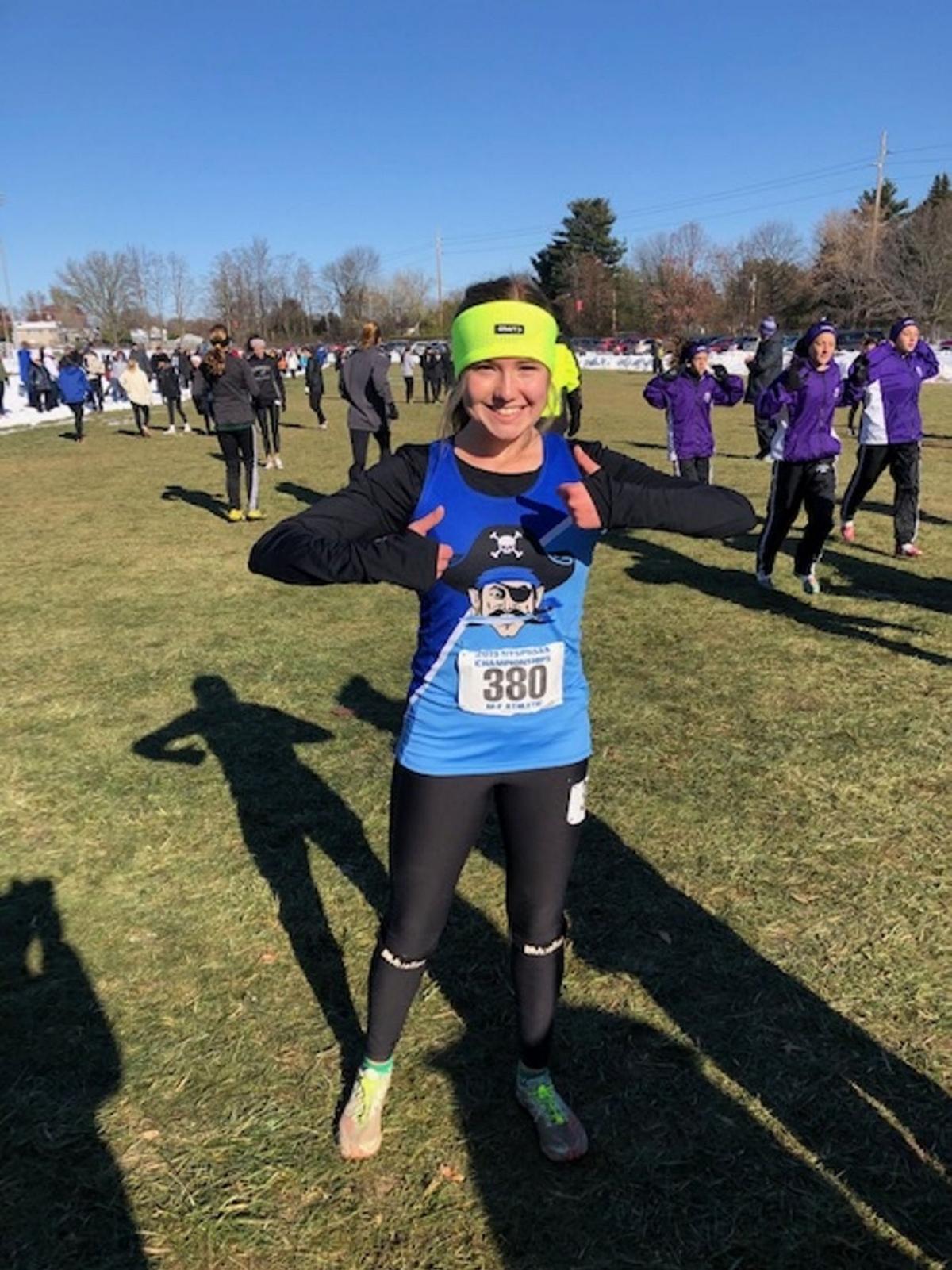 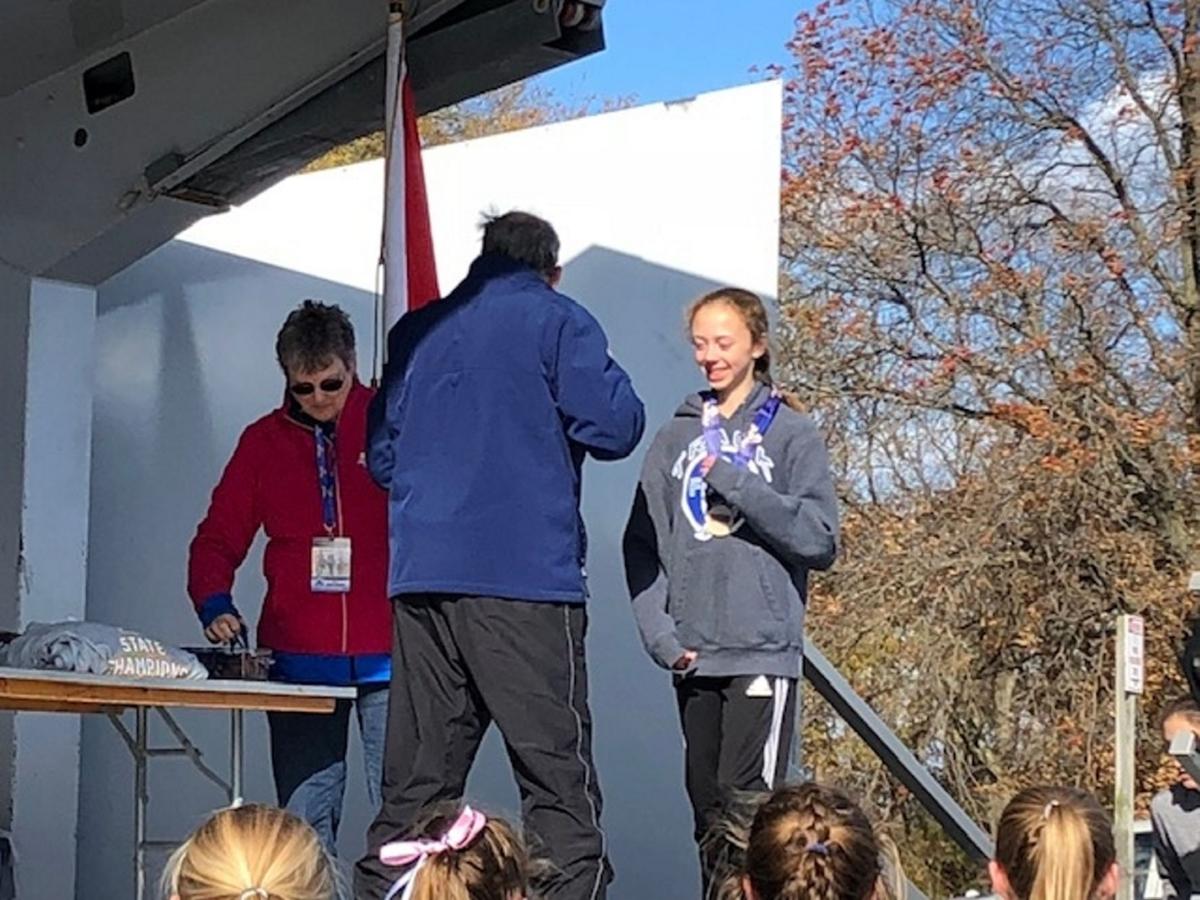 OSWEGO — Oswego High School seniors Molly FitzGibbons and Miranda Gilbert were denied their final track and field season as running buddies for the Buccaneers, but each remains grateful for their coinciding decorated careers and are optimistic regarding their respective futures.

FitzGibbons recently committed to run cross country along with indoor and outdoor track and field for NCAA Division III power Williams College in Williamstown, Mass., while Gilbert accepted an athletic scholarship last fall to participate in all three running sports for Division I Siena College in Loudonville.

The pair of multi-time Section 3 champions and state qualifiers have been close friends since they were in third grade, and their bond strengthened as they worked side-by-side to endure through injuries and improve to be recognized among the area’s best track and cross country athletes.

“It made things a lot more fun because we would get to go to some of the bigger meets together,” Gilbert said of experiencing success with her close confidant. “We trained together, we worked hard together, and we also pushed each other a lot. … We have a lot of runs where we just talk the whole time, and other times where we work harder or compete more. It’s nice to have someone to run by your side.”

FitzGibbons is scheduled to compete in the steeplechase event at the New Balance Nationals Outdoor, which was recently postponed to July 16-19 at Greensboro, N.C., and still scheduled to be held entering the past week. She qualified based on her junior-year performance when she placed 29th at the event.

The senior standout placed 17th in the 3,000-meter run at the state championships March 7 to cap off an impressive final indoor track season, in which she also captured the Section 3 Class A crown in the 1,000 and 1,500 runs, and appeared to be poised for a strong spring campaign.

Gilbert, meanwhile, was eager to get back on the track after her final indoor season was ended early due to injury. The senior duo each expressed disappointment but understood the circumstances surrounding the recent cancelation of the spring sports season.

“I was looking forward to having that last high school season and going out with the team, because they ended up being like a second family to me, so it’s kind of sad, but there’s not much we can do about it,” Gilbert said.

Gilbert participated in varsity cross country and for both the indoor and outdoor track and field teams since the start of her freshman year, while FitzGibbons gradually gravitated toward each sport.

“Miranda and I have always been friends since elementary school, and when we both did track together it was just great because we became running buddies at that point, too,” FitzGibbons said. “It was really cool because she’s one of my closest friends, and then I get to compete against her and we can push each other at practice.”

The duo quickly rose through the Section 3 ranks together in each sport. FitzGibbons placed fifth and Gilbert took sixth at the Section 3 Class A cross country championships during their sophomore year to simultaneously reach the state meet where they placed 14th and 30th, respectively. Gilbert also placed 37th in the state meet as a senior while FitzGibbons secured a 19th-place finish at states as a junior.

They are the only two girls in Oswego cross country history to qualify for the state Federations championships. Gilbert placed 63rd in the race featuring more than 200 of the state’s top runners as a senior last fall, while FitzGibbons’ opportunity to compete was lost in 2018 when the race was canceled due to weather conditions.

FitzGibbons has won three straight outdoor track championships in the steeplechase in addition to several indoor and outdoor track titles in the 1,500, 800, and 3,000 runs. Gilbert won Section 3 Class A titles in the outdoor 1,500, the indoor 1,000, and the 3,000-meter runs for each.

“She’s like the most supportive friend,” Gilbert said. “We both support each other in our running and everything, and it’s fun to be able to cheer each other on at those big events, and at all of our meets, we have fun before and after our races and even during our races together.”

The duo has also provided each other a training aid and understanding ear while working back from their respective injuries.

Gilbert underwent platelet-rich plasma (PRP) injections in both knees to treat lingering tendinitis in January and was cleared to return to training in late April. She was likely to miss the start of outdoor and is working out in run-walk intervals but anticipates running without restrictions in the coming weeks.

FitzGibbons has spent time over the past year battling an avulsion fracture to her foot, an injury that often lingers and is characterized by recurring pain. Her ailment was diagnosed at the start of her junior outdoor track season and she missed roughly half of the 2019 spring campaign before returning to defend her sectional crown in the steeplechase.

“They’ve been through it together, thick and thin, they’re both there,” said Dom Pike, the Oswego varsity girls indoor track coach and an outdoor track assistant who has worked with each senior standout since their freshman year. “They both have a work ethic that is unstoppable, and they got there on work. To get to that elite level, there is a lot of extra time and dedication put in.”

Gilbert and FitzGibbons played a role in helping the Oswego track and field program blossom during their tenures as program leaders.

First-year coach Kristina Taylor said that the Buccaneers expected 87 athletes for the boys and girls teams combined this spring. That nearly quadruples the number of participants when Pike joined the program as a volunteer assistant four years ago.

Pike credited the senior duo’s leadership and willingness to drum up interest for the outdoor track program gradually expanding. He especially credited FitzGibbons for organizing summer runs and making call lists to encourage classmates to join, calling her the program’s “No. 1 recruiter.”

The duo was among 10 senior girls signed up for the 2020 spring season and would have been joined by Megan Albright, Grayson Cary, Sophia DeLorenzo, Abigail Faul, Jenna Garcia, Isabella Herrera, Katelyn Lagoe, and Ashley Patterson, among a bevy of upstart juniors and underclassmen.

“It was cool to see it grow,” FitzGibbons said. “I think we had good coaches, and we started to get more kids to come out for the team and they were good athletes. … I’ll miss our team. We grew so close.”

Gilbert added: “It was great to see more and more people join these past few years, you get to be close with more people, and it was just more fun to be part of a bigger team.”

FitzGibbons decided on Williams College of the New England Small College Athletic Conference near the end of the recent indoor track season and signed her letter of intent in March after gaining acceptance to the college to study biology. The Ephs are a perennial NCAA Division III contender and the women’s team won the 2019 indoor track national championship.

“It’s super exciting because I get to meet all new people, and I’m hoping to have a team as close as we had in high school,” FitzGibbons said. “I didn’t really find (the college) until late, but I fell in love with it when I did. I like the size of it, because it’s really tiny, I like that it’s in the middle of the mountains so I can go hiking, and then of course the team felt like a good fit.”

Gilbert signed her national letter of intent for Division I Siena during a school ceremony Nov. 13 last year and is working her way back into training for the Saints of the Metro Atlantic Athletic Conference.

Gilbert and FitzGibbons helped the Buccaneers secure top-five team finishes in each of the last two years for both indoor and outdoor track. Last year, the duo joined teammates Gretchen Dowd and Abby Reith in winning the 3,200 relays at both the indoor and outdoor sectional championship meets.

The Buccaneers girls squad finished second and fifth, respectively, in the Class A team standings at outdoor sectionals over the last two seasons after posting consecutive ninth-place showings in 2016 and 2017.

Coaches and returning athletes will hope to build on the success of their graduating standouts starting next fall.

“They meant so much to our team, and they work so hard that they don’t have to say anything, it just makes the other kids want to work harder,” said Taylor, who has spent two years with the Oswego track programs and was set to take over as head coach for girls outdoor unit this spring.

“Just from being around them at practice, they’ve been awesome and great leaders,” she added. “They’re a great example for the rest of the team.”