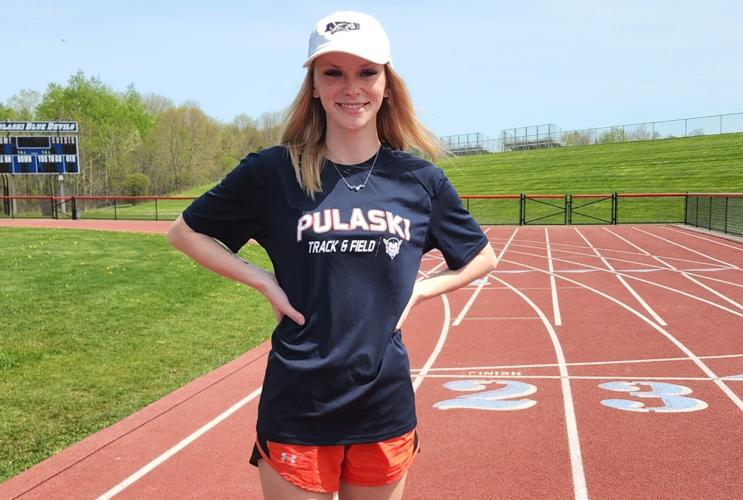 Pulaski High School senior Emily Gareau prior to a recent varsity track and field practice. She will run for Division I Niagara University next year. Josh St. Croix/Johnson Newspapers 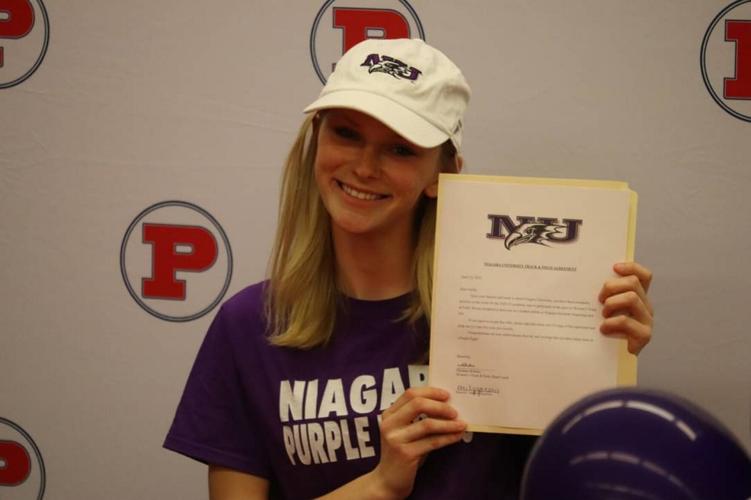 Pulaski High School senior Emily Gareau at a recent signing ceremony. She will run track and field for Division I Niagara University next year. Provided photo

Pulaski High School senior Emily Gareau prior to a recent varsity track and field practice. She will run for Division I Niagara University next year. Josh St. Croix/Johnson Newspapers

Pulaski High School senior Emily Gareau at a recent signing ceremony. She will run track and field for Division I Niagara University next year. Provided photo

PULASKI — Emily Gareau was initially intimidated by the presence of Breann Burns at Pulaski High School varsity girls track and field practice, but now stands next to her idol and mentor in exclusive company.

Gareau recently signed to run for Niagara University next year and will become the first from the Blue Devils to compete for an NCAA Division I program in the sport since the 2014 graduate Burns joined Rhode Island, according to coach Jordan Fahnestock.

Gareau cited Burns, a former assistant coach in the program during her formative years, as playing a critical role in motivating her to reach the same pinnacle and serving as a recent unofficial adviser.

“She had a ton (of influence), she taught me so much, all the little stuff that needed to be improved,” said Gareau, who has shined mainly in varsity sprint events since joining on a whim in eighth grade.

“She came in the first time, a day in eighth grade, she was standing by my blocks, and I was so nervous to go meet her,” Gareau added. “It was intimidating to have her around me at first because I knew she held me to this higher standard, and I didn’t see myself as that type of person at the time, and she trained me to be that person.”

Gareau is aiming to cap off her decorated varsity career in the coming weeks, already helping Pulaski (6-0) to its third straight unbeaten dual-meet season and Onondaga High School League championship, improving to 24-1 for league dual meets during her four seasons.

She has established goals of reaching the state championships, shaving the two-tenths of a second needed to reset the school record in the 200-meter sprint, and claiming her 10th career Section 3 medal by sweeping in four events.

Gareau has won consecutive sectional crowns in the 100. She repeated in that event last spring after becoming the second girl in program history to win both the 100 and 200 sectional titles in the same year as a freshman in 2019. There were no sectionals held in 2020 due to COVID-19 concerns.

Gareau also contributed to sectional titles in the 1,600 and 400 relays last year, helping to reset a 39-year-old record in the latter event along with teammates Addison Dana, Hayley Hunter, and Lily Hunter.

Gareau added to her accolades during the indoor track season this past winter by claiming the school record and sectional title in the 300, topping Burns’ previous mark.

“That was awesome because the person who held it was Breann and I got to text her after and be like: ‘Hey, I beat your record,’” Gareau said. “She was so happy for me.”

Gareau garnered significant attention from college coaches and took her time selecting from a long line of suitors over the past year.

She and Fahnestock listed the offers she was considering on a whiteboard, starting with a list of 10 ranging from schools in Hawaii, Florida, Ohio, and other points across the map, before erasing several choices during the discussion.

Gareau said she consulted Burns throughout the process and finally made her decision after sitting down with her dad to go through all the options.

She arrived at Niagara, located near Buffalo, noting her instant bond with the coach and future teammates, remembering a team dinner they cooked for her on a recruiting visit as one example of the welcoming atmosphere. She plans to study nursing while sprinting for the track team.

“It was very up and down, I had a lot of options,” Gareau said. “I sat down with my dad with all the schools left in front of me and he said: ‘Which one really feels like home?’ And it kept going back to Niagara.”

Gareau made her commitment official with a signing ceremony earlier this month at Pulaski High School. She described the feeling as “a weight off the shoulders,” as she celebrated her decision surrounded by family and friends.

“I think she has had a storied career here and I think that moment is just celebration and the cherry on top of, this is what you worked so hard for, and now it’s time to celebrate that,” Fahnestock said.

Gareau joined the track team in eighth grade after a recruiting pitch from Fahnestock, who was actively trying to build a deep roster in his first year taking over the program. She previously played modified soccer and had notable straight-line speed that stood out to her soon-to-be track coach.

“She took to the track, and it was amazing to see what she was capable of even as an eighth-grader,” Fahnestock said. “She made a huge jump her ninth-grade year, but it’s like any event you put her in, she rises to the occasion, and a lot of that comes down to her competitiveness. She doesn’t like to lose.”

In addition to ending her high school career in style, Gareau is hoping to pass the baton to her returning teammates to extend their three-year winning streak upon her graduation.

She is one of 13 seniors, several of whom will graduate having never lost a varsity dual meet, and she has worked closely with promising eighth graders such as Vanessa Trumble and twin sisters Kendall and Kylie Dye, among other emerging young contributors. Pulaski has qualified multiple athletes in every event for the upcoming sectional championships.

The Section 3 Class C-1 meet is slated for May 24 and the state qualifier will be held on June 2.