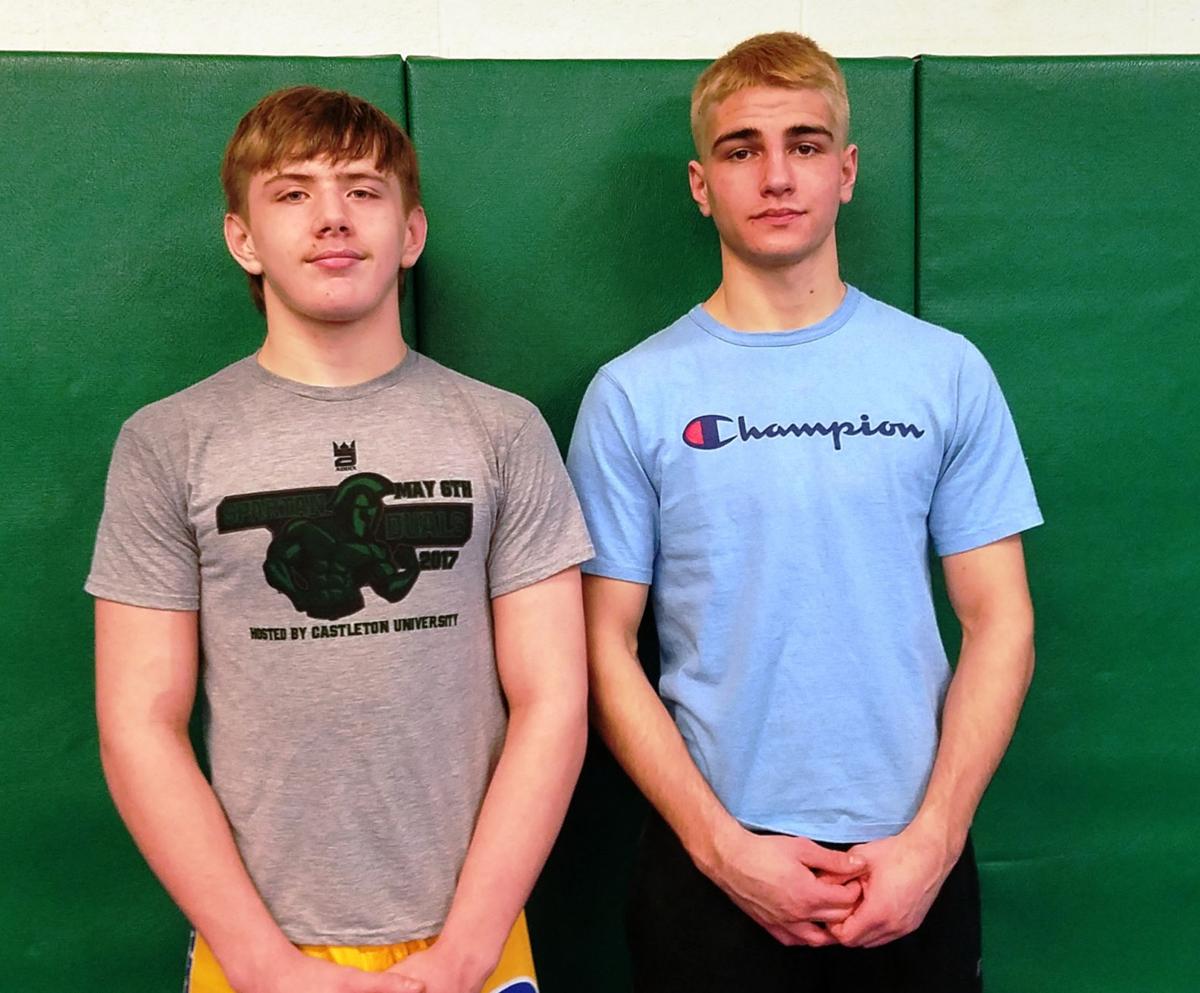 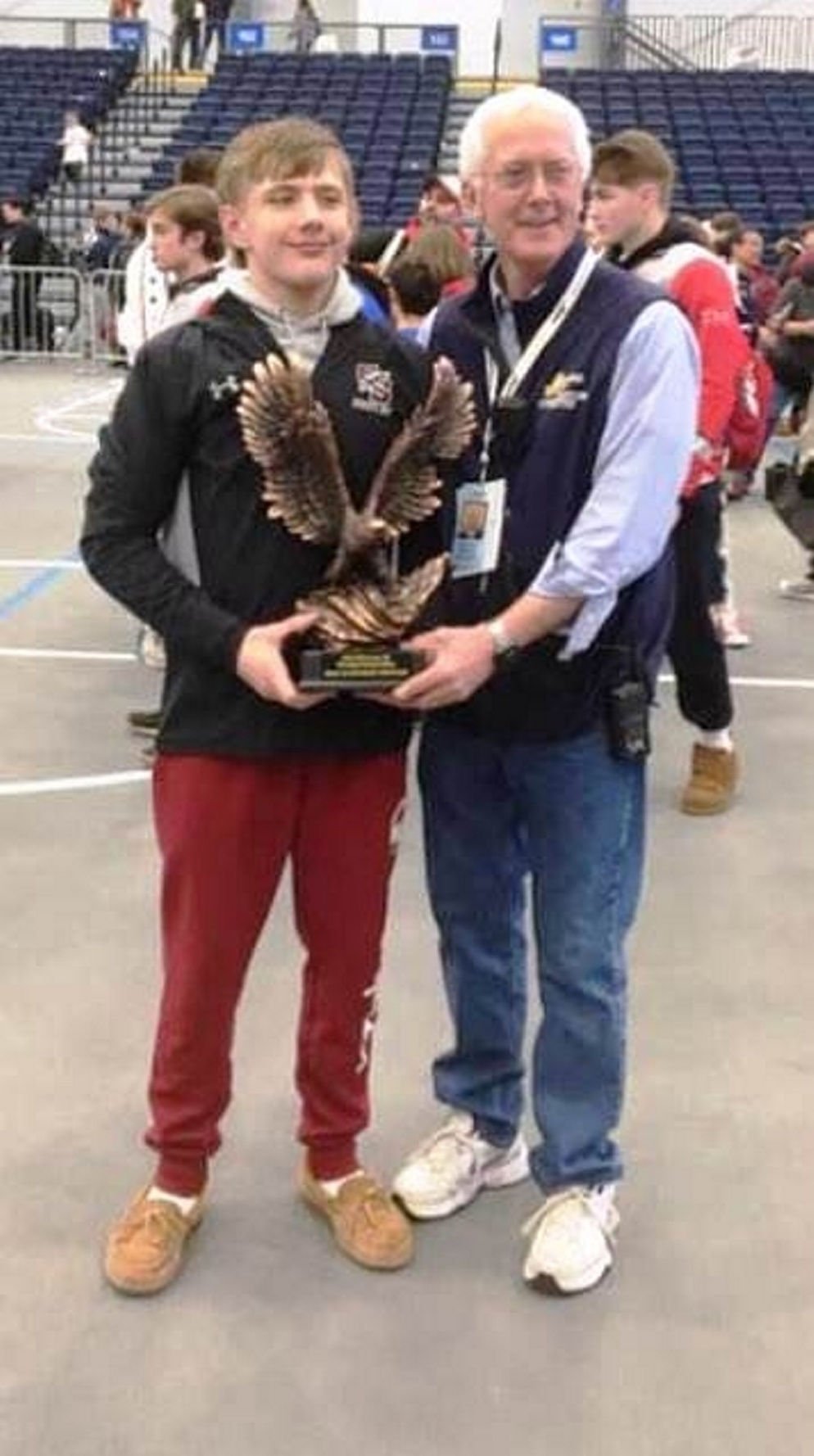 Central Square sophomore Kole Mulhauser (left) is presented with the Division I Most Outstanding Wrestler award at the Section 3 championships Feb. 15 at SRC Arena in Syracuse. Provided photo 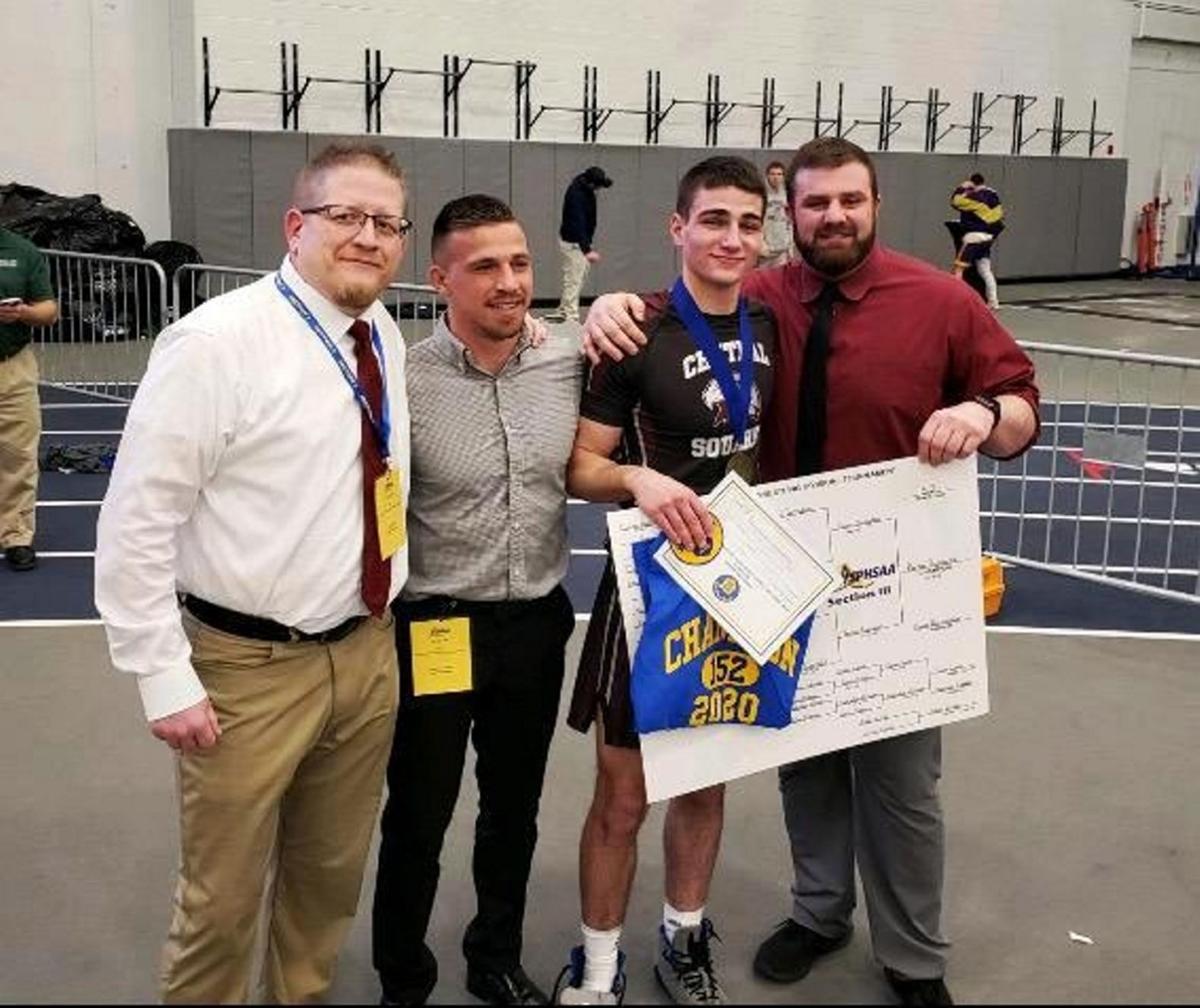 Central Square sophomore Kole Mulhauser (left) is presented with the Division I Most Outstanding Wrestler award at the Section 3 championships Feb. 15 at SRC Arena in Syracuse. Provided photo

CICERO — In the moments before the biggest match of his high school wrestling career at the recent Section 3 Division I championships, Peyton Rupracht gazed into the crowd at SRC Arena in Syracuse and watched as the legion of Central Square supporters cheered on his co-captain, Kole Mulhauser.

Rupracht fed off that energy to capture his first sectional championship just a few minutes after Mulhauser secured his weight class, and the Redhawks’ training partners are now on a mission to produce similar results at this weekend’s state championships.

The NYSPHSAA wrestling championship tournament is slated to begin today and conclude Saturday at the Times Union Center in Albany. The senior Rupracht (152 pounds) and sophomore Mulhauser (145) each gained an automatic berth following their respective sectional triumphs on Feb. 15.

“Kole went out there and pinned his opponent in like 14 seconds in the finals, so that really pumped me up and made me a little less nervous,” Rupracht said. “I looked around and everybody that was going to be cheering for me were already cheering loud for him, so I just wanted to keep it going and wrestle the best I could.”

Rupracht and Mulhauser will be seventh duo in program history to represent Central Square in the same state tournament. The Redhawks have accomplished that feat four times in the last six years.

“It’s huge for the program, it can give younger kids that hope and that drive to come in during the offseason and if you keep working for it, they can be in the same spot as Kole and Peyton one day,” Central Square coach Tim LaRose said.

Rupracht and Mulhauser entered the season as co-captains and the most accomplished wrestlers in the varsity program. They requested to work as practice partners when Mulhauser moved up to the 145-pound weight class after wrestling last season at 120, getting closer to Rupracht’s weight.

“We each just wanted to get better throughout the whole season,” Mulhauser said. “It’s pretty high intensity with us every practice.”

Rupracht and Mulhauser each wrestle throughout the offseason and attend various tournaments and clinics, eager to pass along a new skill or technique learned to his partner.

“We were the top guys in our room,” Rupracht said. “Kole goes to a lot of different practices so he’s always bringing in new stuff, and I go to a decent amount of outside things too so we really help each other out, push each other, motivate each other.”

He added: “It’s helped bring the intensity up in the room I think, and helps everyone in the regular season to practice better because they see the two captains going hard all the time, always working and going through every position. … We go at it each takedown and right after it, we’re giggling or something, but once the whistle blows again, we’re diving on a leg.”

Mulhauser will be making his third straight trip to the state tournament and enters with a 39-1 overall record, according to stats reported to cnywrestling.com. The standout sophomore won both the Section 3 Class A and Section 3 Division I titles for the second straight year earlier this month, and has accumulated a career record of 146-20.

Rupracht — a senior in his sixth varsity season — will be making his state tournament debut after claiming his first sectional crown, which followed three consecutive top-four finishes in Section 3. He enters with a season record of 34-4 and 167-58 career.

“It’s pretty cool because we’ve practiced together every day, so knowing the work that we put in to get there makes it mean more,” Mulhauser said.

Rupracht added: “It’s my first year so I’ll be the rookie at states I guess, but it’s nice because we can practice together there and we’ll be able to support each other the whole way.”

George Korthas is the lone state champion from Central Square. He secured the 250-pound title in 1985.