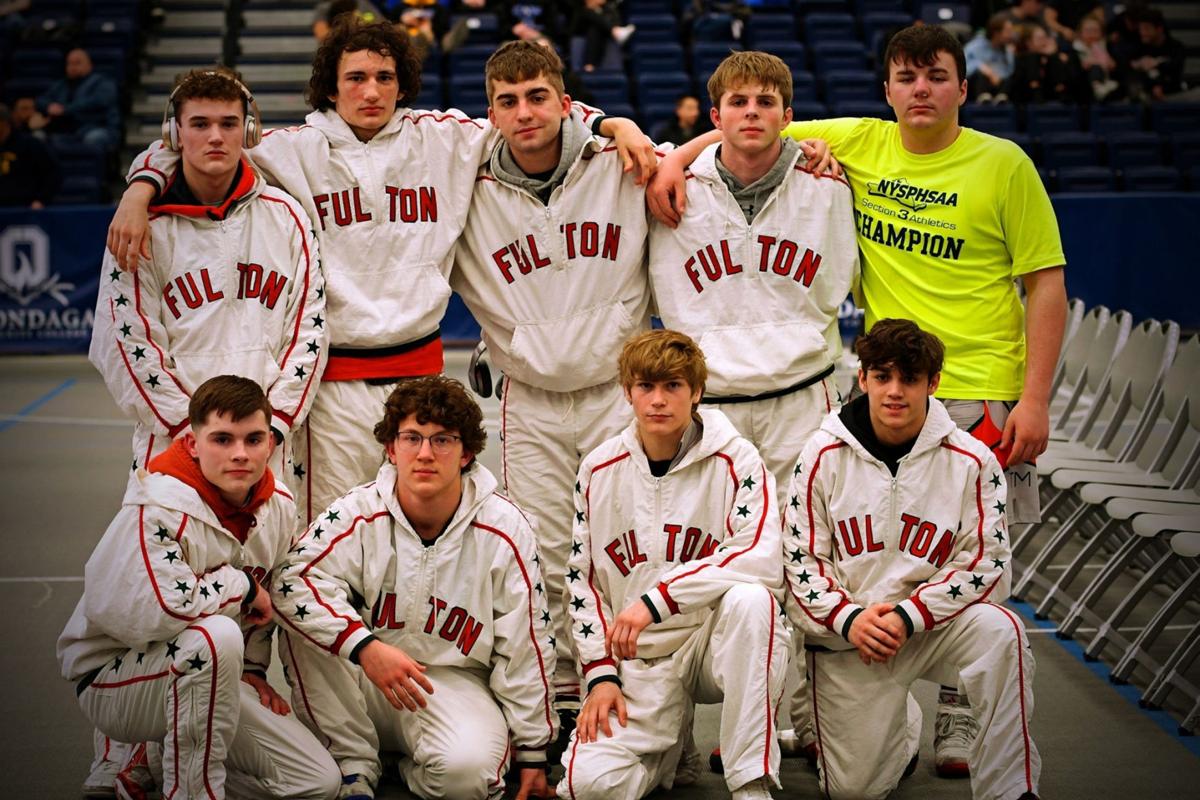 The nine varsity wrestlers from Fulton that advanced to the Section 3 Division I finals in their respective weight classes Feb. 15 at SRC Arena in Syracuse. Provided photo 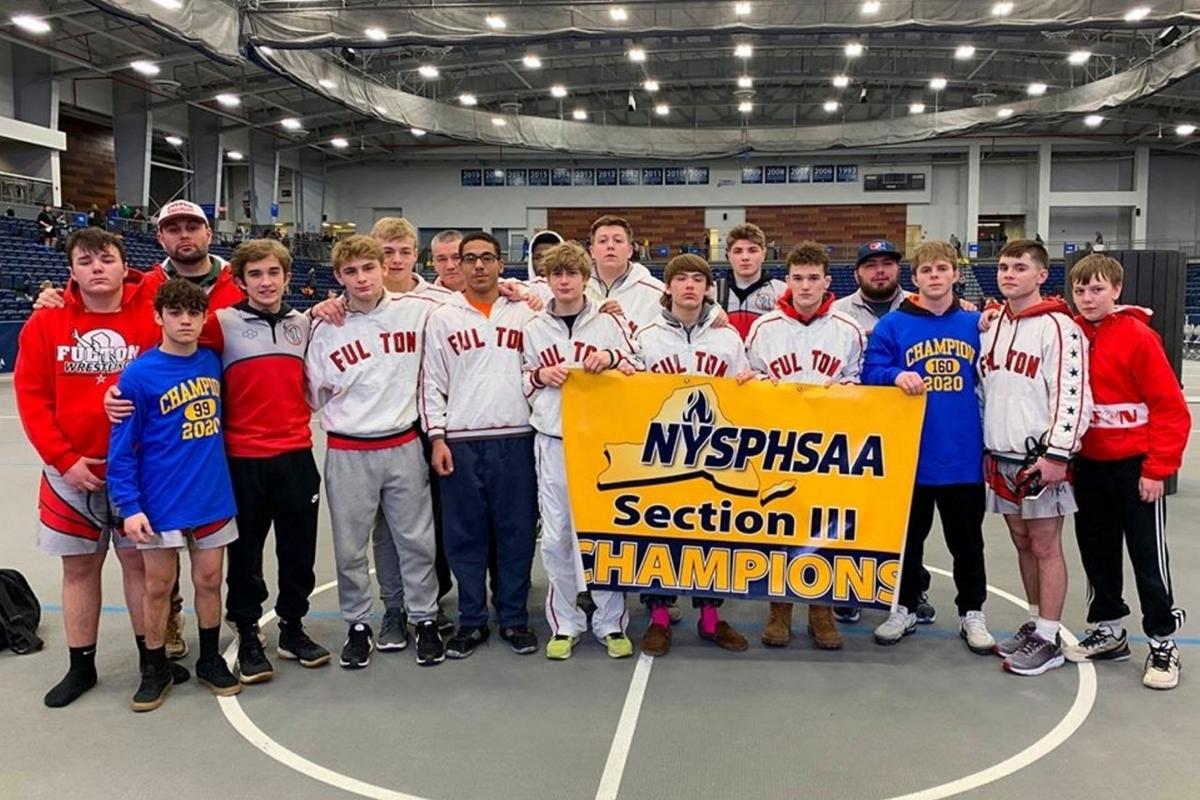 The Fulton varsity wrestling team with the Section 3 Division I championship banner, which it won for the record sixth straight year Feb. 15 at SRC Arena in Syracuse. Provided photo 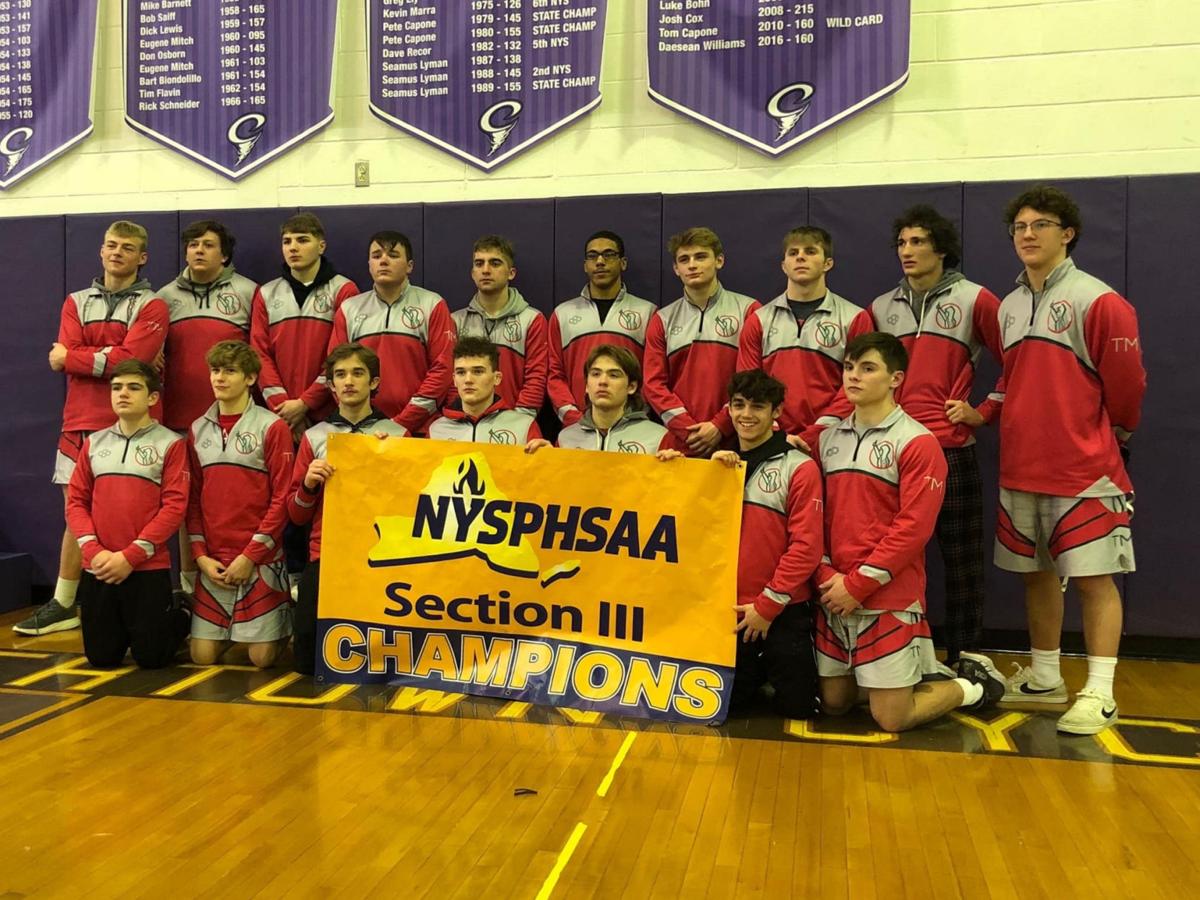 The Fulton varsity wrestling team with the Section 3 Class A championship banner, which it has won every year since 1986, Feb. 8 at Watertown High School. Provided photo 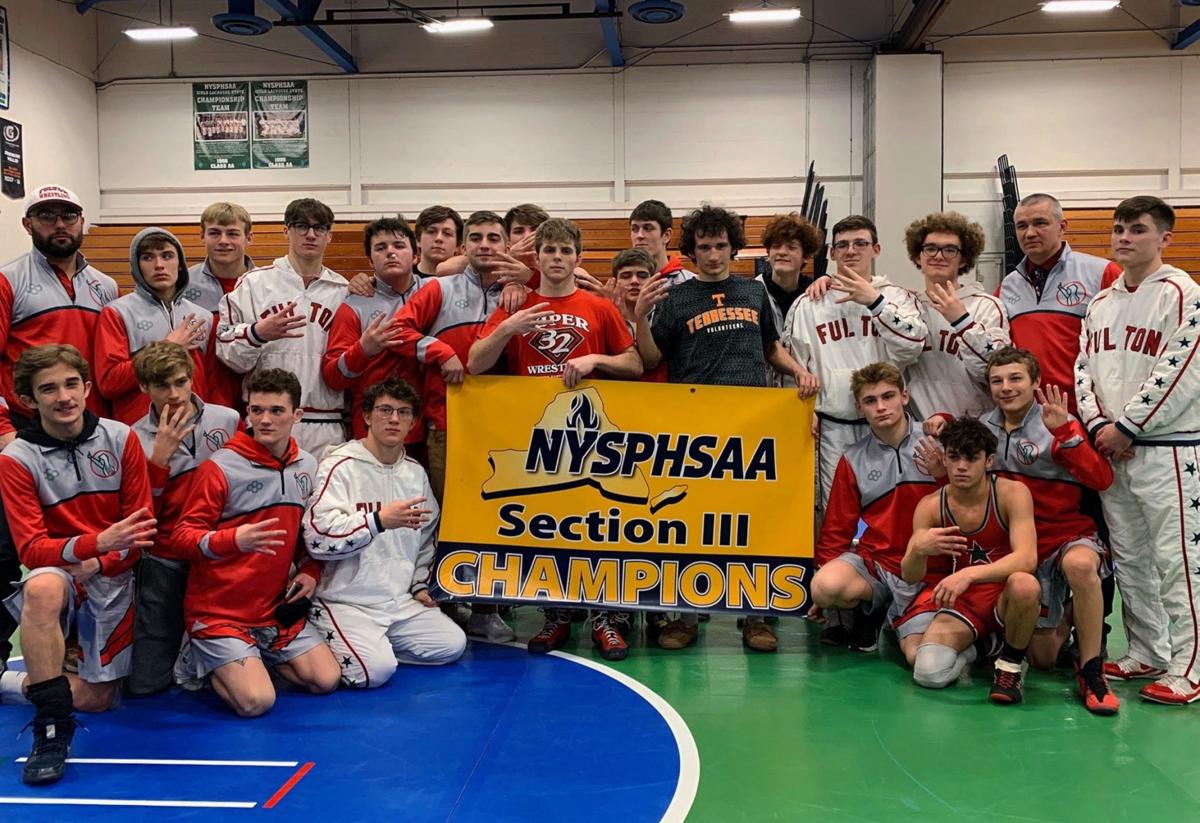 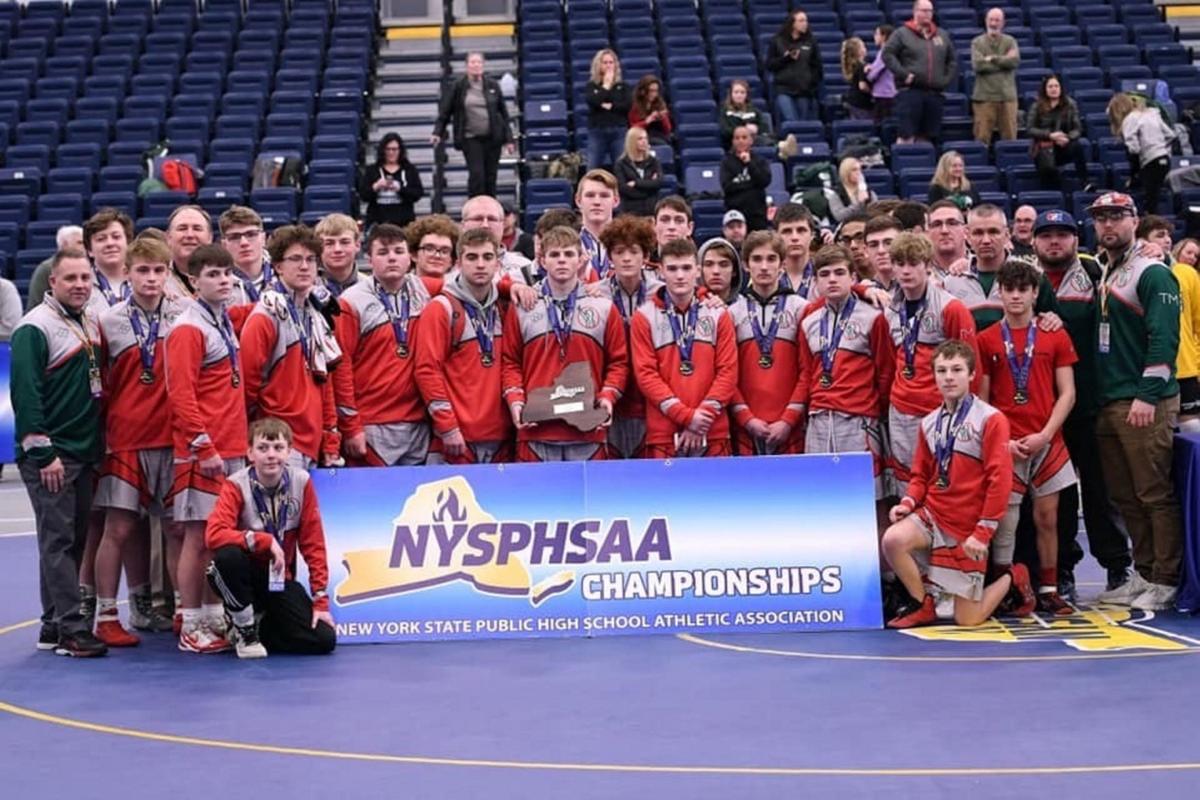 The nine varsity wrestlers from Fulton that advanced to the Section 3 Division I finals in their respective weight classes Feb. 15 at SRC Arena in Syracuse. Provided photo

The Fulton varsity wrestling team with the Section 3 Division I championship banner, which it won for the record sixth straight year Feb. 15 at SRC Arena in Syracuse. Provided photo

The Fulton varsity wrestling team with the Section 3 Class A championship banner, which it has won every year since 1986, Feb. 8 at Watertown High School. Provided photo

FULTON — Fulton G. Ray Bodley High School will be represented by six varsity wrestlers at the state championship tournament this weekend, matching a program record to cap off another campaign for the ages.

The state championships are slated to begin today at the Times Union Center in Albany and end with the semifinals and final rounds on Saturday.

“I don’t think we’re the most talented group that has ever come through Fulton, but we have our head on straight from everything coach (Jeff) Waldron and coach (Cam) Mills have taught us, the way we put it out on the mat and how hard we worked and wrestled, and the way we all had the same goal every year,” said French, a senior nearing the end of his fifth varsity campaign. “It was like we were all one wrestler on the mat, next man up and next man up, you had to keep winning for your friends.”

French, Galvin, and Walts are also part of a select senior group — joined by Ian Bogardus and Nicholas Parrish — that has contributed to the postseason “triple crown,” in four straight years. The triple crown entails winning the Section 3 duals, the Section 3 Class A Tournament, and the Section 3 Division I championship.

The Red Raiders won their record sixth straight sectional championship on Feb. 15 at SRC Arena, claimed the Class A title on Feb. 8 at Watertown High School, extending a streak that began in 1986, and took the Section 3 dual meet crown Jan. 23 at Cicero-North Syracuse High School.

“To break the record (at sectionals) was pretty special, considering no team had ever won six in a row before and to be part of that team and teams before us that won, I’d say it’s an accomplishment for the community rather than just for our team this year,” French said.

“The senior class we have is just insane,” he added. “We love each other so much and just want to see each other do well and most of us did well (at sectionals). We’re proud of each other, we’re happy.”

Fulton placed wrestlers in the Section 3 Division I finals in nine out of 15 total weight classes. In addition to the six who advanced to the state meet via automatic berth or wild card, the trio of Bogardus (170) Samuel May (138), and Matthew Woodworth (220) also made it to the finals of their respective brackets.

“We’re strong and we work together as a team, and we’re determined to get things done,” Pagan said.

Hoffman added: “That just shows that we can get people into the finals and work hard to get there, and hopefully we can do the same thing again next year.”

The Red Raiders have matched the 2007 team for the most representatives at the state tournament. That squad featured 2007 graduate Cam Mills, who has worked as an assistant coach in the program for the last six years, and also consisted of three sectional champions and three wild card berths.

“They work their butts off and they stay focused,” Cam Mills said. “That’s what you’ve got to do, you just have to work. You get out of it what you put into it and they put a lot into it, so they’re now reaping the benefits of that.”

Fulton wrapped up the dual-meet portion of its season by reaching the championship finals of the state dual meet for the first time in the tournament’s three years of existence. The Red Raiders had been the only team to reach the semifinals in each of the two previous seasons.

The team also finished with 998 all-time dual meet victories, placing it two away from landmark win No. 1,000 to open next season. There are only four other high school wrestling programs in the nation to reach that milestone, according to N.Y. Wrestling News, none of which are within the state.

“It’s by far the most motivated group of kids I’ve ever coached,” said Jeffrey Waldron, approaching the end of his sixth season as head varsity coach. “They had goals, and they never lost sight of them.”

He added: “We made a lot of memories. This will be a team that goes down in history as one of the best in a program that’s known as being one of the best programs in our state. I will always remember the 2020 state (dual) finalist team.”