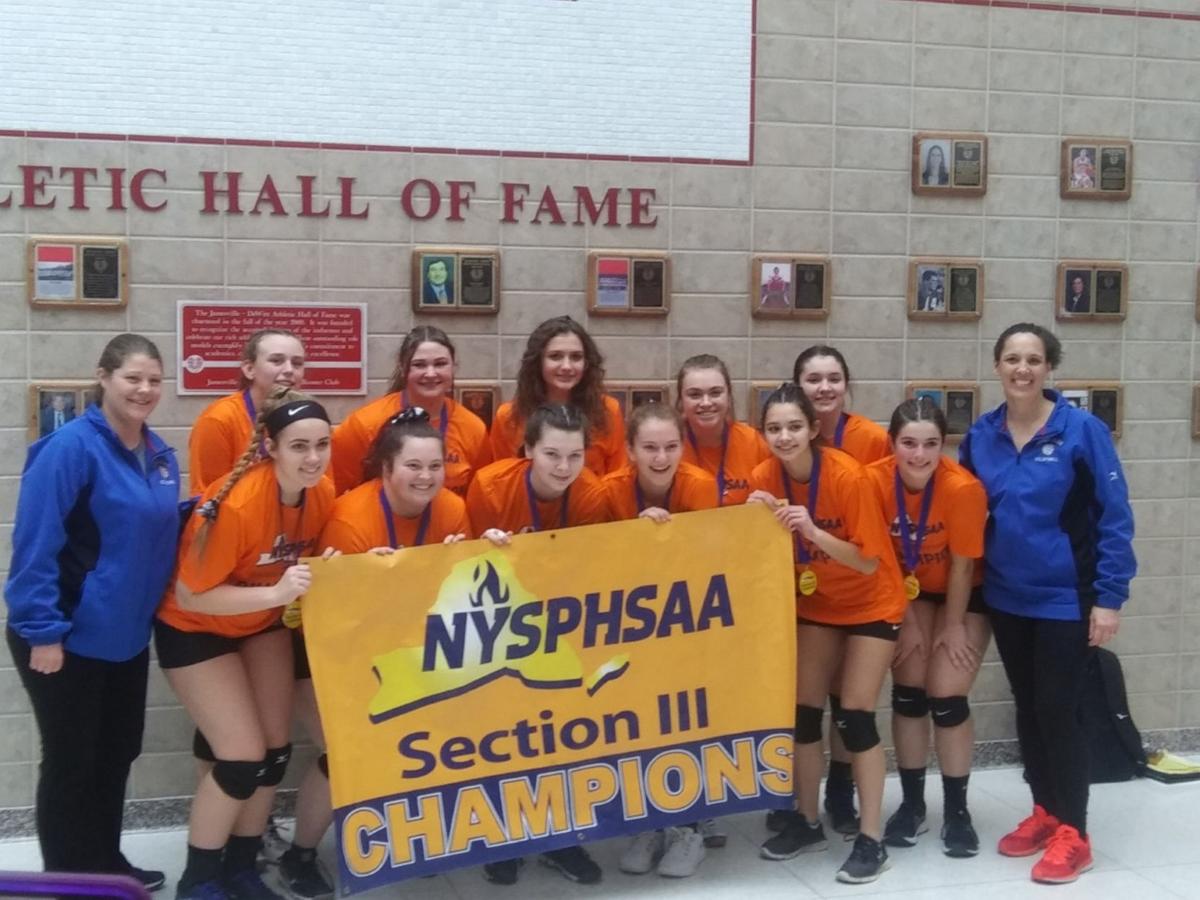 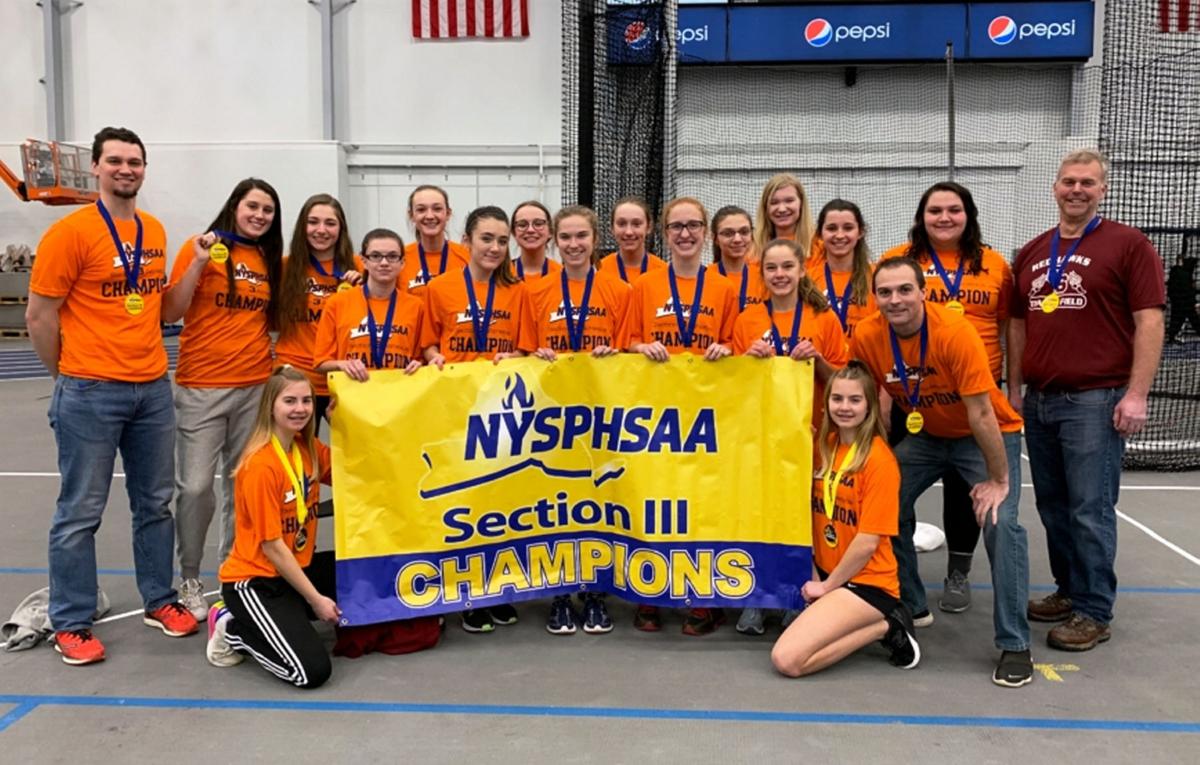 The Central Square indoor track team poses with the Section 3 championship banner after winning the Class A title Feb. 8 at SRC Arena in Syracuse. Photo provided by Jim Drancsak 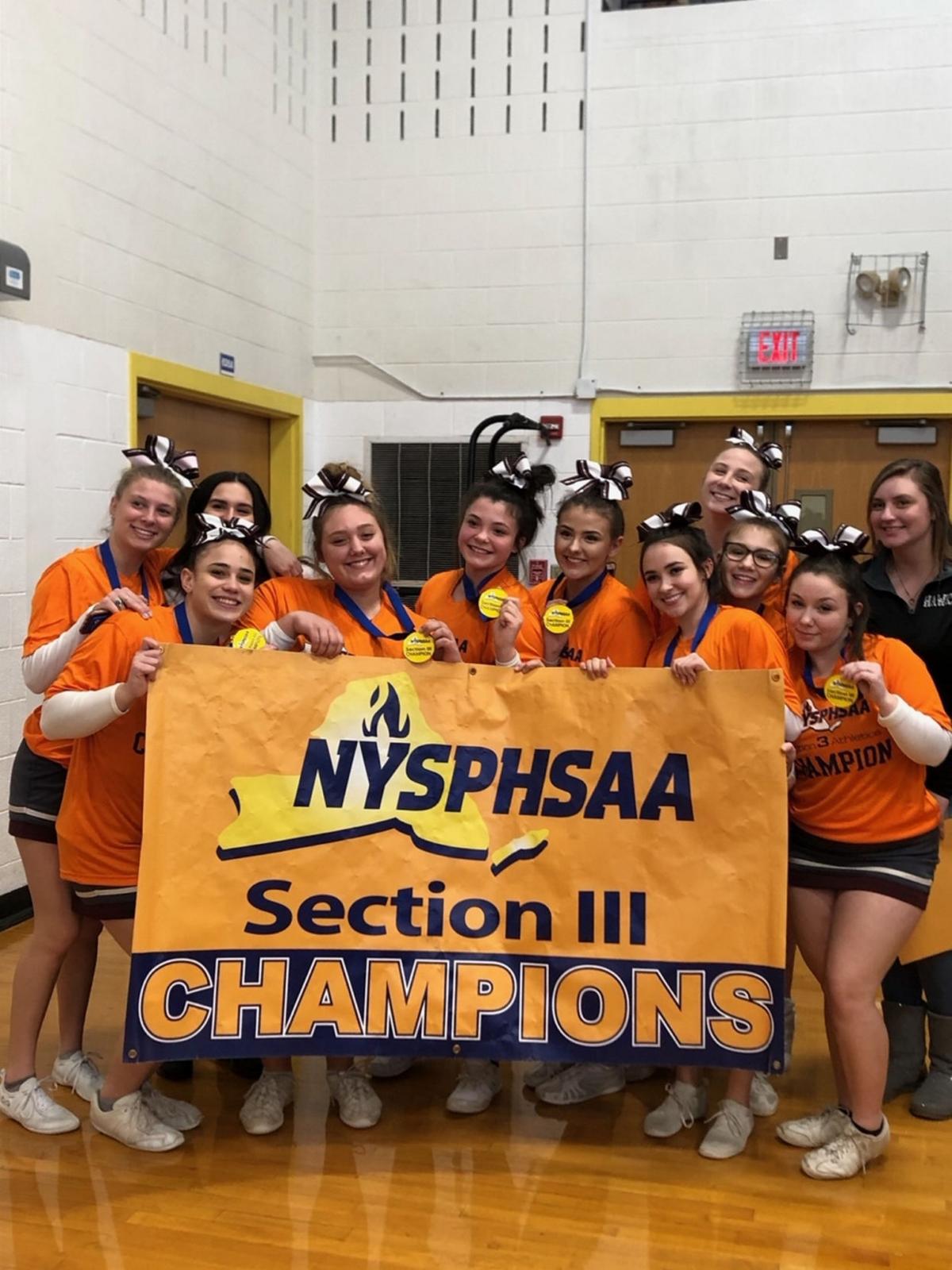 The Central Square indoor track team poses with the Section 3 championship banner after winning the Class A title Feb. 8 at SRC Arena in Syracuse. Photo provided by Jim Drancsak

The Comets played their third straight final and last won the Class C title in 2018. They bounced back from losing the Class C final to Mount Markham in 2019.

Sandy Creek stumbled at the start against top-seeded Morrisville-Eaton and faced an early deficit before making a late run at the end of the set. Sandy Creek knew it could have won the set had it got off the blocks quicker.

“They started playing their best game when they were down 10 points,” Sandy Creek head coach Dorianne Hathway said. “Even playing at our worst, we were still close.”

Morrisville-Eaton boasts one of the taller groups of hitters in Class D, which would normally hamper Sandy Creek’s strong middle attack, However, the Comets were able to speed the game up and hit around their players. The Comets gave different looks to keep the Warriors off balance.

“We were just trying to move the ball around a lot and give them something that they haven’t really seen before,” Balcom said.

“We just know where to put the ball,” Deanna Hathway said. “If there’s two middle blockers up against you, we just got to know to cut it over and cut it around them like we work on in practice every day.

As the Frontier League’s only Class D volleyball school, Sandy Creek always faces bigger schools with deep rosters and bigger players. However, that prepared them for the sectional final.

“It helps to play against bigger players and it helped us mentally to play strong people,” Dorianne Hathway said.

The Comets won the sectional crown with a relatively young team that will only lose one senior. Deanna Hathway is excited that the Comets have a chance to be in this position again next season.

“It’s the plan to be back here next year,” Miller said.

Four area swimmers will compete in the state championship meet slated for March 6-7 at Nassau County Aquatic Center on Long Island. The Section 3 last-chance qualifier was held last Saturday at Nottingham High School, and others secured their place by reaching the state standard earlier this season.

Fulton, which posted the second-highest team score at the state qualifier meet, will be represented at states by the duo of Tyler LaDue and T.J. Clayton. Mexico’s Kian Long and Oswego’s Jack Tonkin will each compete in diving.

Earlier in the week, the Red Raiders captured the Section 3 Class B championship on Feb. 13 at Nottingham H.S. They tallied 446 points to edge out New Hartford (440) and Mexico (326).

Long placed second in the Class B diving finals and Tonkin took third in Class A.

Fulton extended its reign of dominance atop Section 3 wrestling by claiming its record sixth straight team title with its first-place finish in Division I at the sectional championship meet last Saturday at SRC Arena in Syracuse. That victory also helped the perennial power complete its fourth straight “triple crown,” after winning the Section 3 dual meet championships and the Class A title.

Last Saturday, Fulton was led by sectional champions Frederick Pagan (99 pounds), Dominick Hoffman (106), and Cam Galvin (160), each of whom secured an automatic berth into the state championships slated for Feb. 28-29 at the Times Union Center in Albany.

They will be joined by the Central Square duo of Section 3 Division I champions Kole Mulhauser (145), who was named Most Outstanding Wrestler for D-I, and Peyton Rupracht (152).

South Jefferson/Sandy Creek wrestlers Anthony Rasmussen (182) and Tyler Mousaw (195) each won sectional titles in Division II to claim their respective places at the state meet. Wild card state berths were expected to be announced this week.

The Central Square girls won the Class A team title and were among the several area teams to be led by individual champions at the Section 3 indoor track and field championships Feb. 8 at SRC Arena.

The Section 3 state qualifier is slated for Feb. 25 in the same location, and the state meet will be held March 7 at Staten Island’s Ocean Breeze Track and Field Facility.

Cayley Sundet won the 300-meter dash and 600 run to help guide the Redhawks to their first-place finish. Evelyn Dolce won the pole vault and long jump while her twin sister, Ella, placed first in the 55 hurdles.

Oswego senior Molly FitzGibbons won the 1,500 and 3,000 runs and took part in the Buccaneers’ winning 3,200 relay team along with Gretchen Dowd, Sophie DeLorenzo, and Anne Niger.

Mexico junior Reatha vonHoltz won the shot put in the Class B1 championships.

The Redhawks also shined in the boys championships with a victory in the 1,600 relay by the team of Max Creamer, Rumo Kenzie, Trenton Sperati and Nick Maw. Central Square sophomore Brett Fehrman won the pole vault in Class A.

Oswego junior Benjamin won the 300 dash and sophomore Landon Voss claimed the 600 run in Class A.

Carson bowled a 300 game to open the competition and qualified for the state meet along with Fulton’s Mitch Donaldson and Alexis Ingersol. Donaldson and Ingersol each qualified at the Section 3 Shootout on Feb. 13 at King Pin Lanes in Utica.

The state bowling championships are slated for March 13-15 at AMF Strike N’ Spare in Syracuse.

n Sportswriter Josh St.Croix contributed to this report. He can be reached at jstcroix@wdt.net.