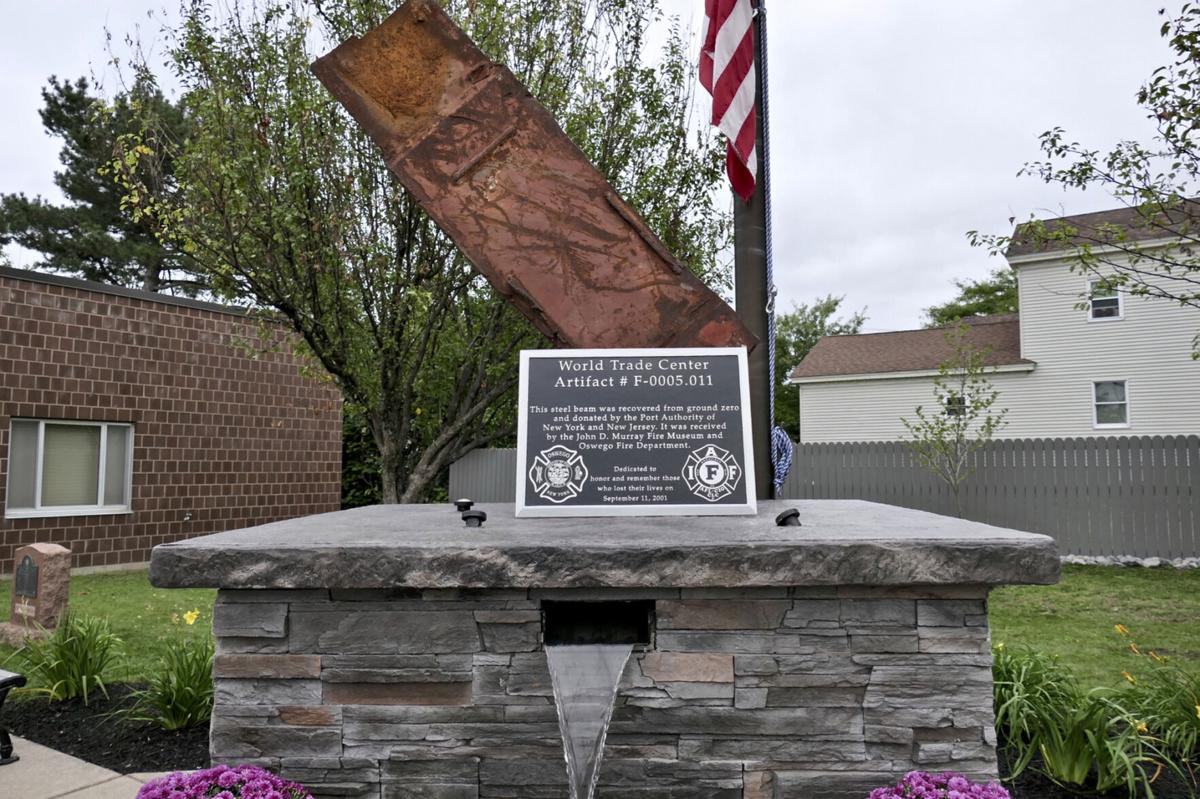 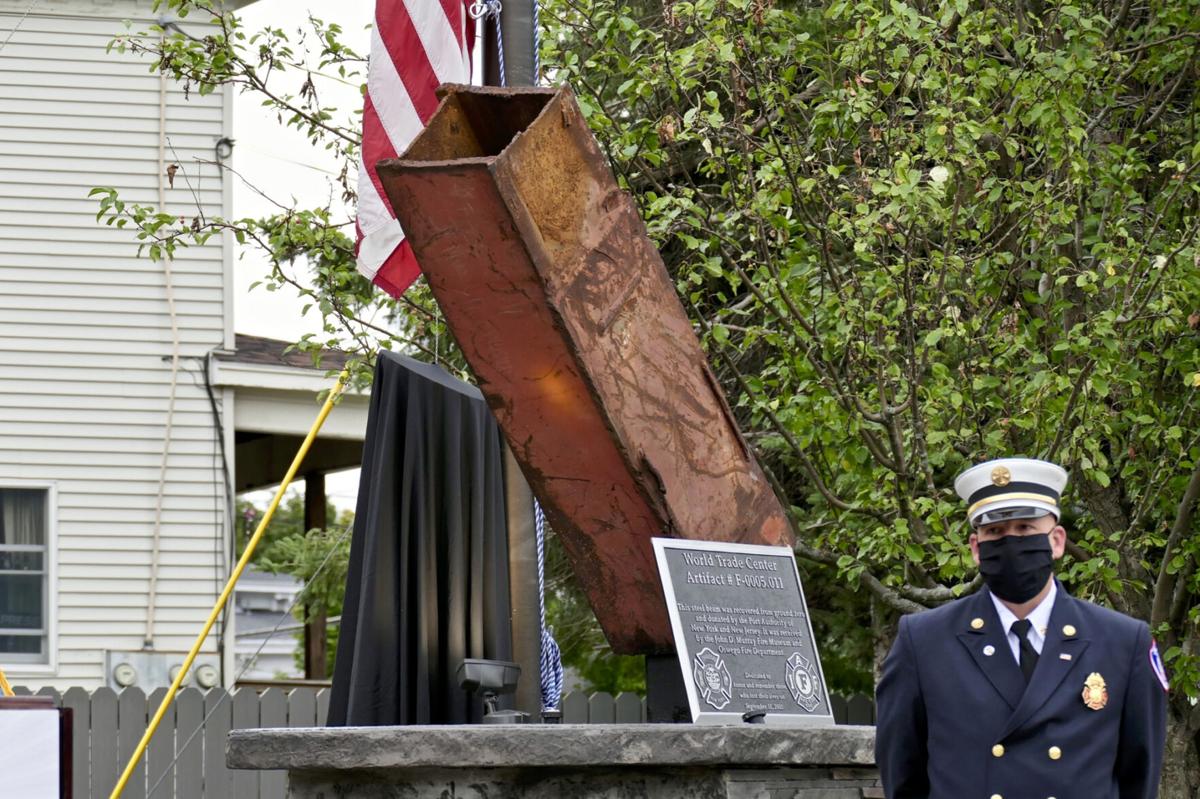 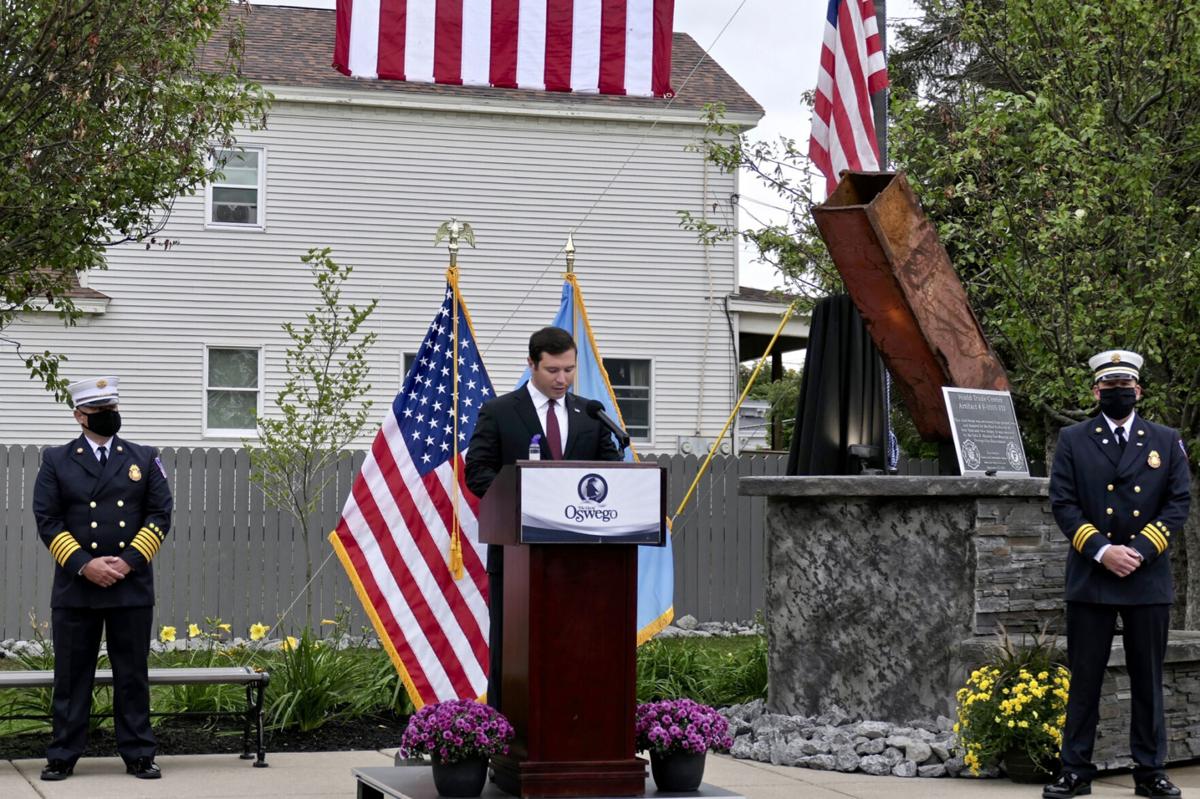 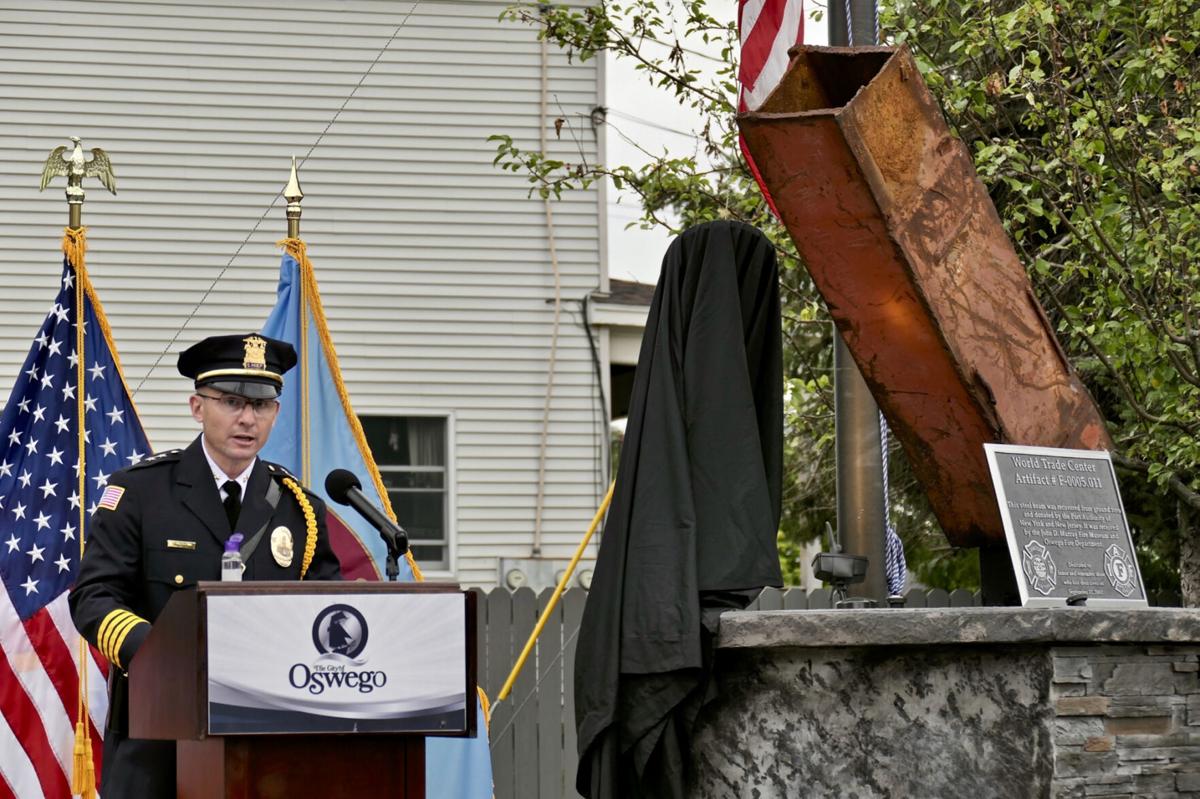 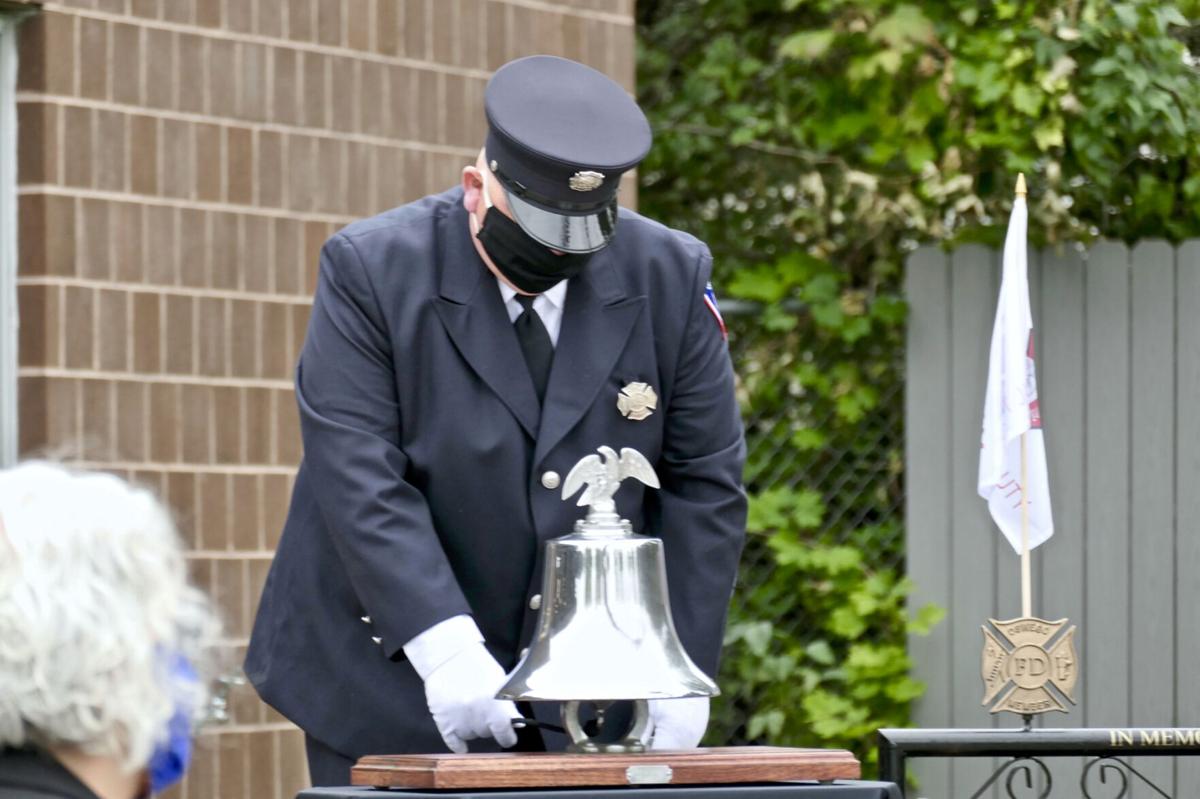 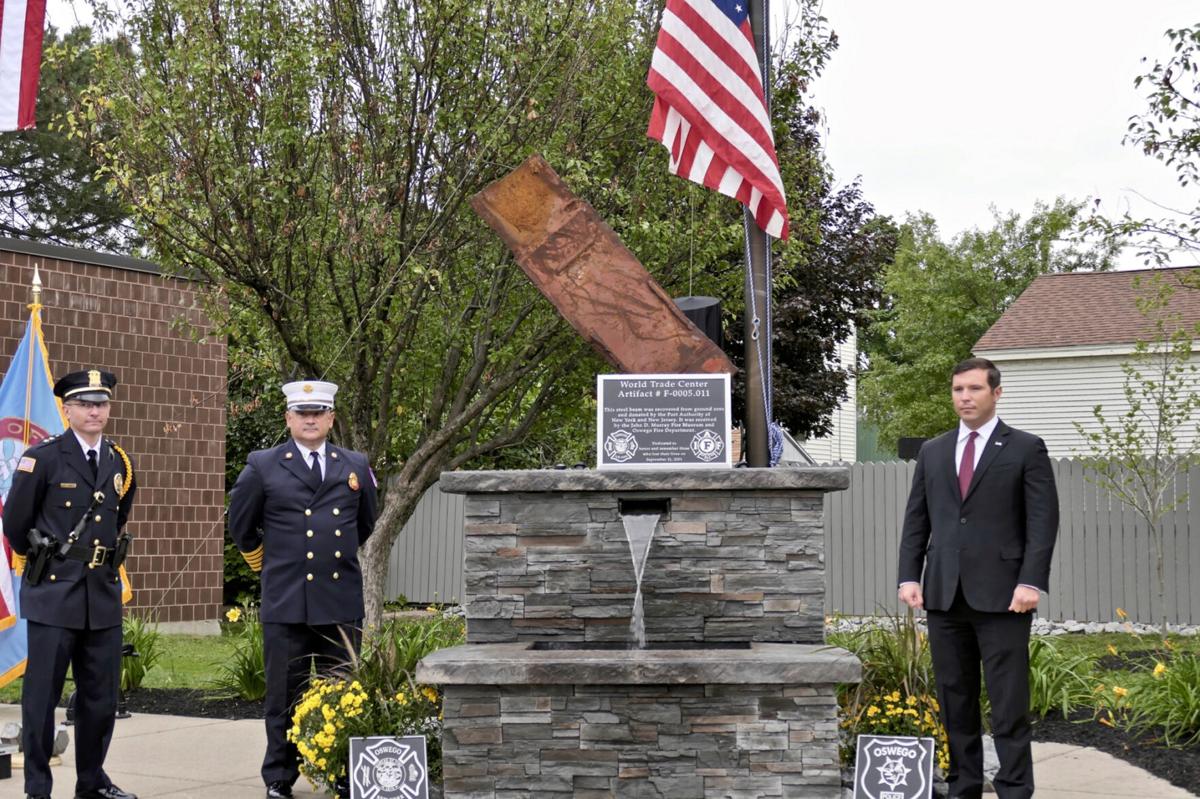 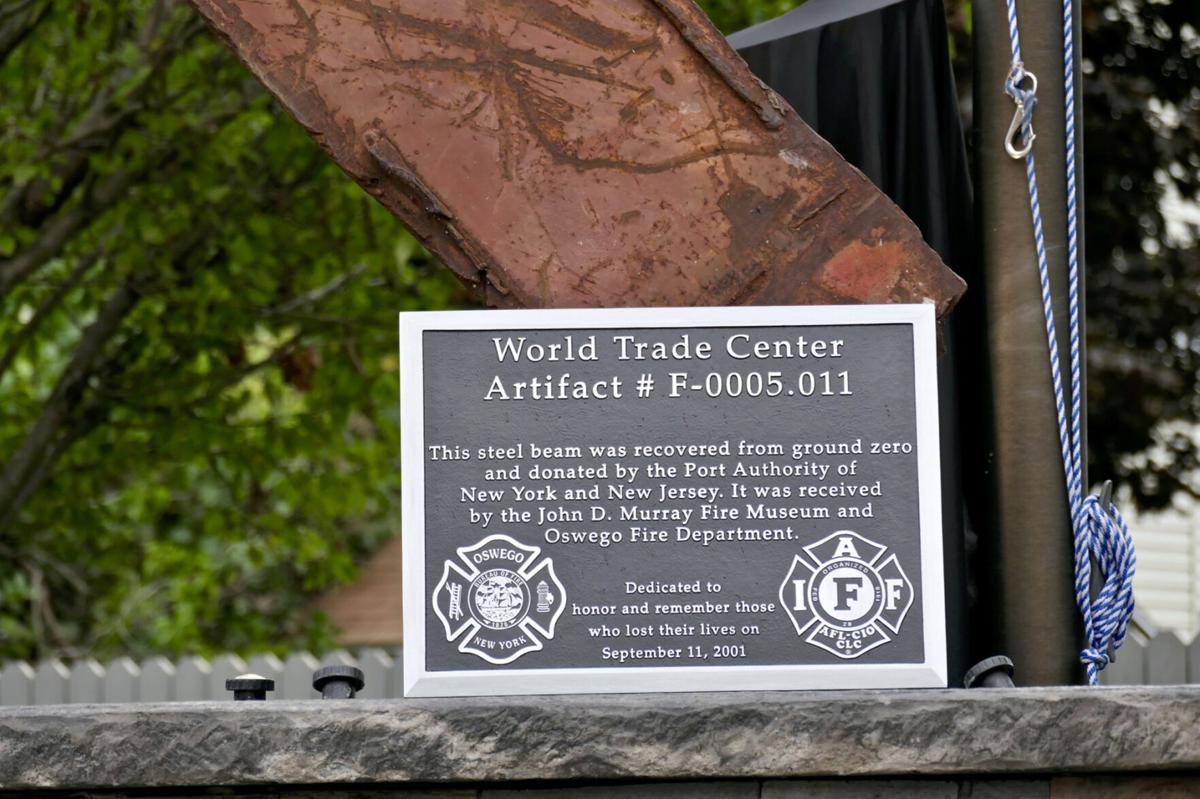 Closeup of the steel beam and plaque of the Sept. 11 Memorial. Randy Pellis/Oswego County News 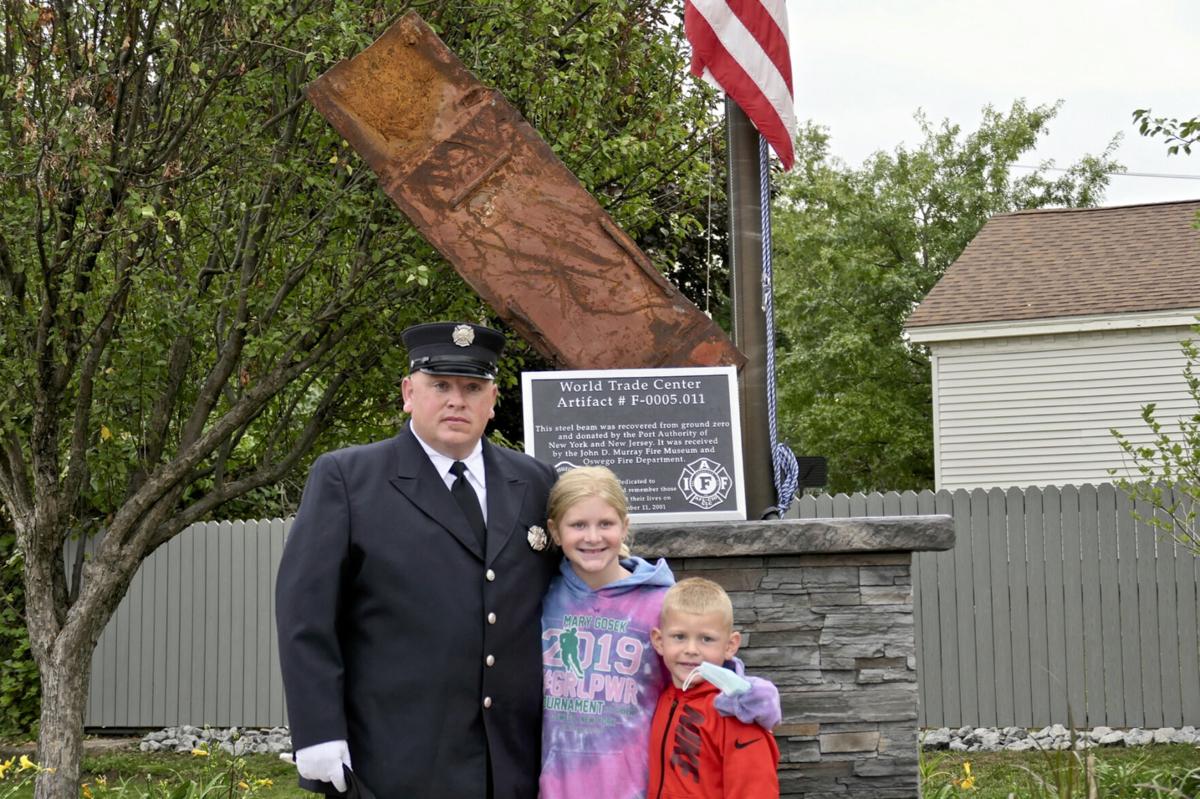 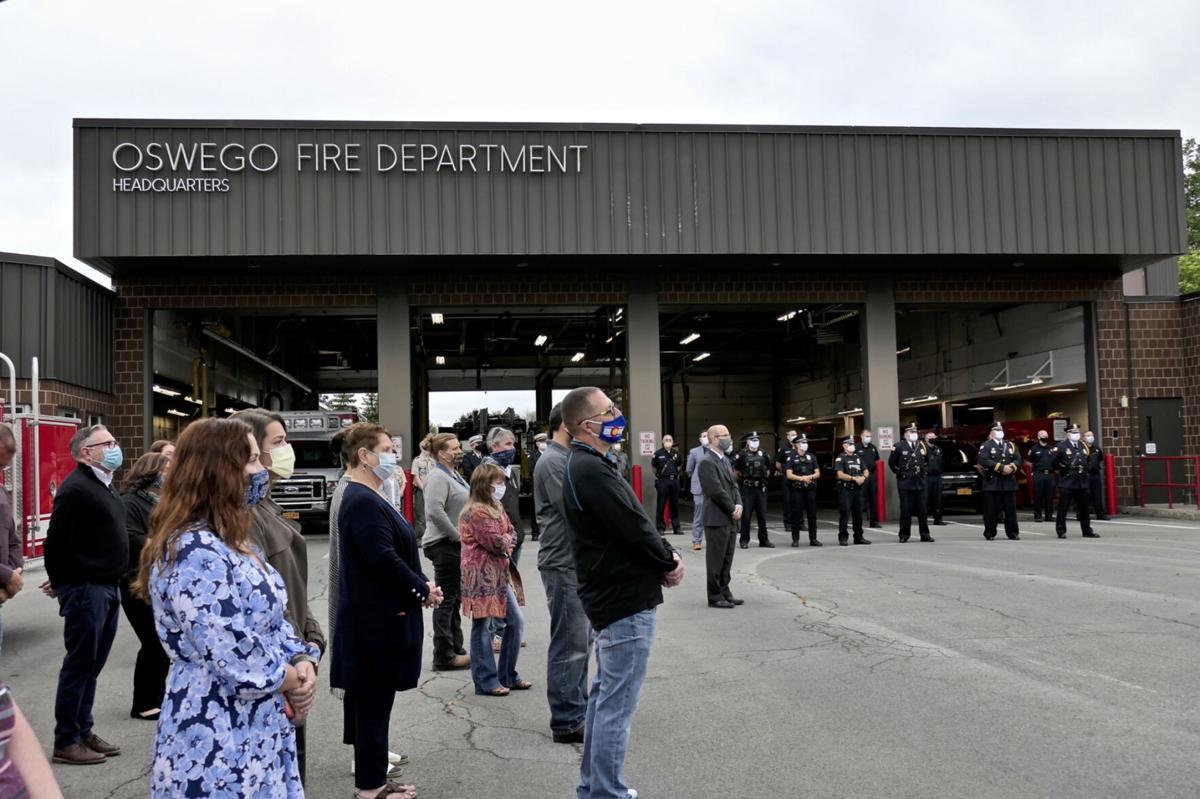 Some of those in attendance at this morning’s Sept. 11 memorial service. Randy Pellis/Oswego County News 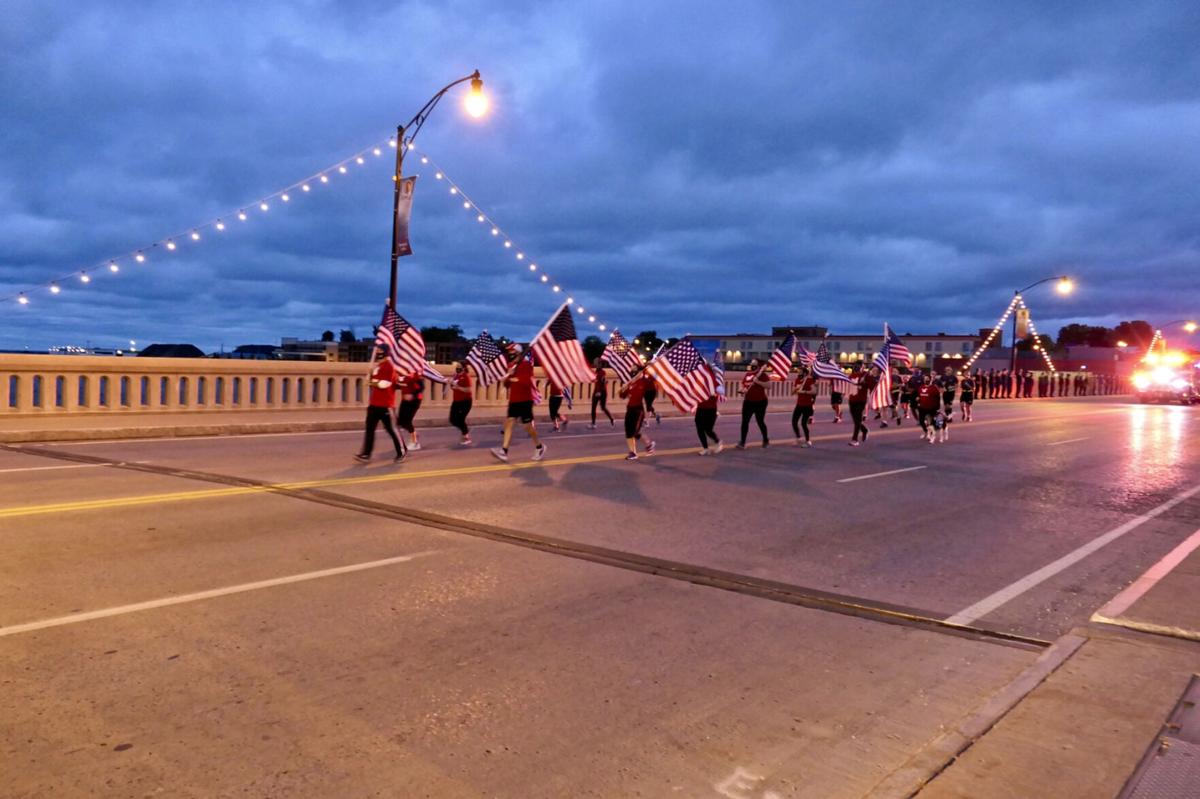 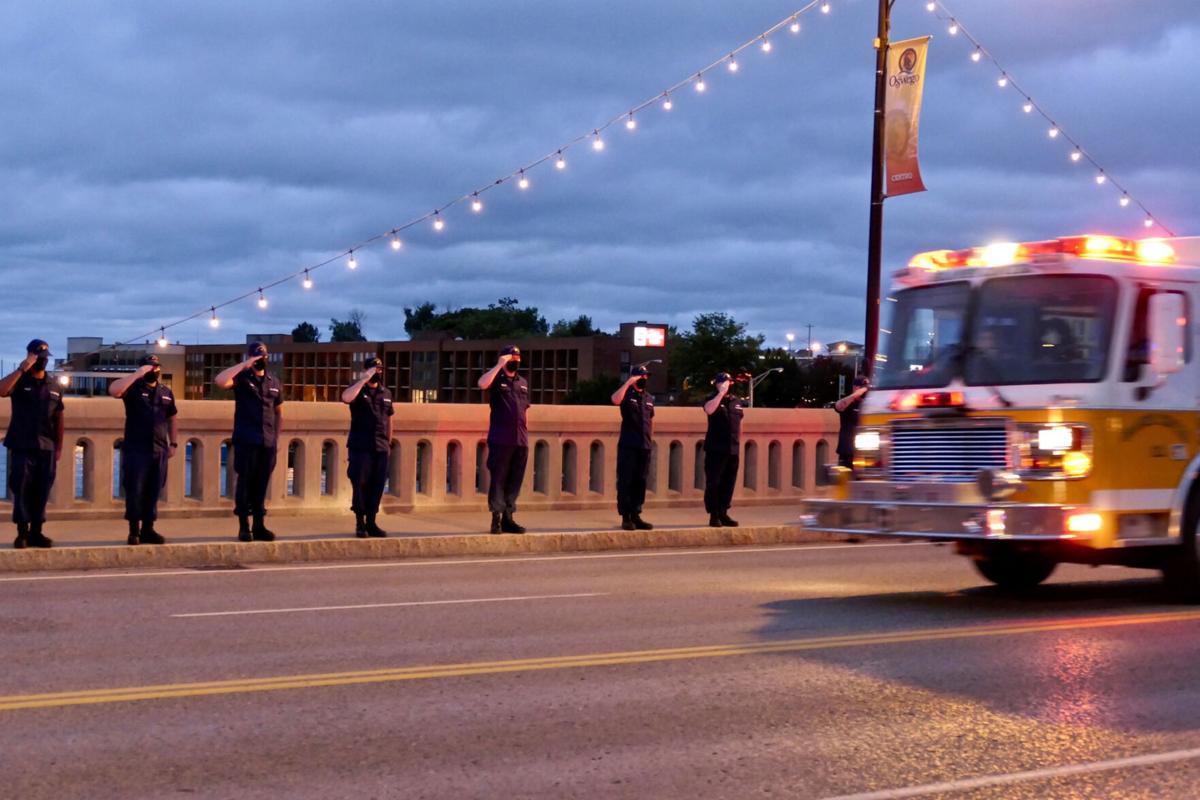 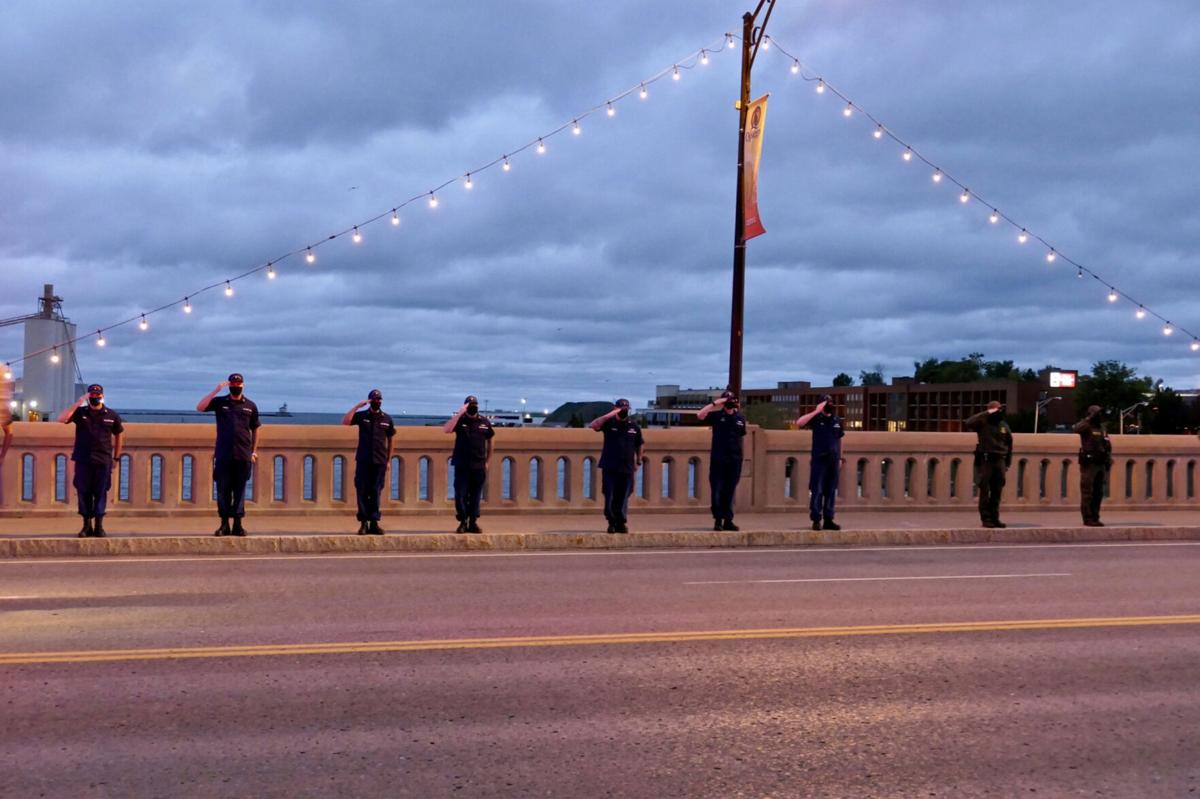 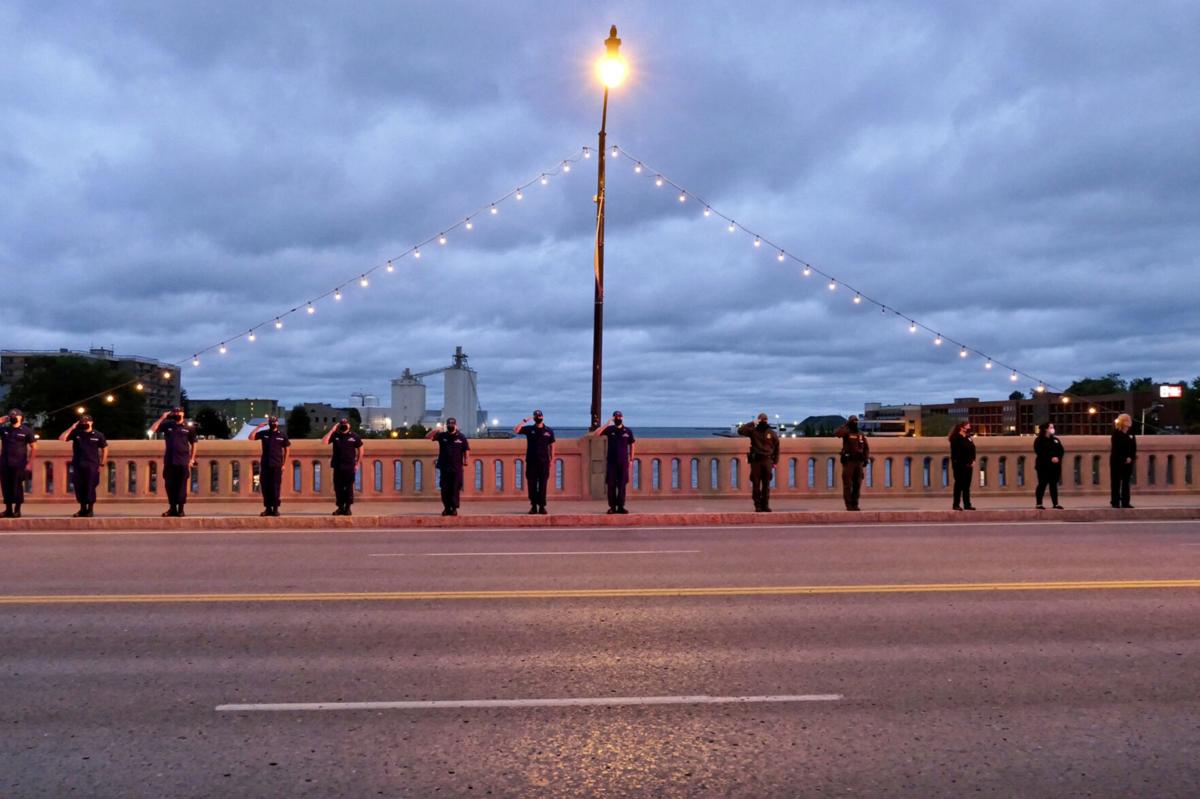 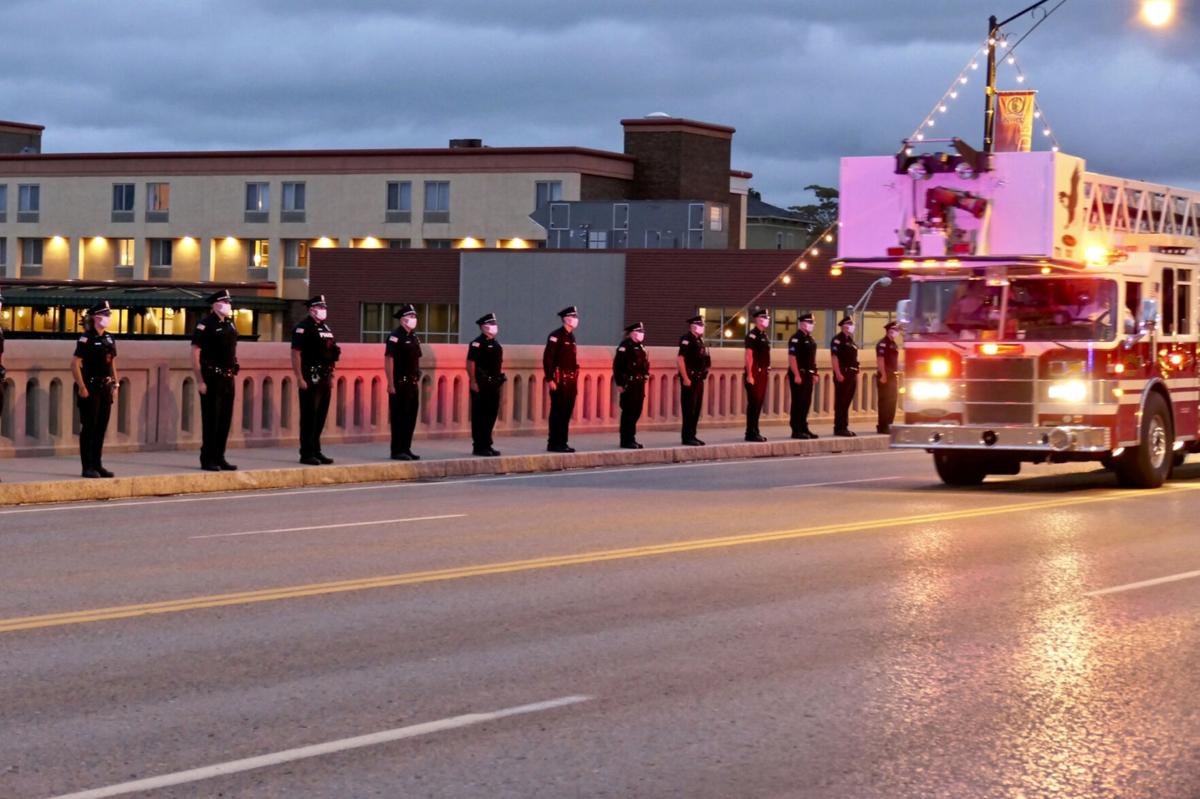 Closeup of the steel beam and plaque of the Sept. 11 Memorial. Randy Pellis/Oswego County News

Some of those in attendance at this morning’s Sept. 11 memorial service. Randy Pellis/Oswego County News

OSWEGO — Nineteen years ago, this country witnessed the extremes of good and evil all in the course of a September morning. While 2,750 New Yorkers doomed to die that sky-blue day were trapped inside the flaming, thick-smoke-belching, 110-story towers, hundreds of first responders rushed in to save them. Over 400 of them never made it out. Three hundred forty-three firefighters and 60 police officers died that day in acts of heroism and self-sacrifice rarely equaled since.

It was extremely fitting that the city “celebrated,” as Mayor William Barlow emphasized, not only the memory of those heroes and the almost 3,000 others lost that unforgettable day, but the strength, the resilience, the greatness of an America that still stands in the face of all adversity and rises again and again to its hard-won place in this world.

As symbols can say so much, it was especially fitting today, that Oswego unveiled its own 9-11 memorial of a steel beam pointing upward, found among the wreckage of the World Trade Center, rising from a stone waterfall base, and permanently established on the grounds of the Oswego Fire Department Headquarters at 35 E. Cayuga St.

It has been waiting for this moment since it was brought here from New York City on Nov. 18, 2015 and safely stored in the museum behind the Eastside Fire Station draped in an American flag. In mid-August this year, it was brought out as construction on Oswego’s Sept. 11 Memorial, designed and built by Department of Public Works Commissioner Thomas Kells and his DPW staff, began. Although not visible at this morning’s service, the memorial will be lit up at night.

According to Barlow, “based on the thickness of the steel, the beam is assumed to be from approximately the 50th floor of one of the twin towers.”

Barlow spoke of the history of this day and what it was intended to inspire in the people of this country.

“When President George W. Bush on Sept. 4, 2002 proclaimed Sept. 11, 2002 as the first Patriot Day,” Barlow said, “he asked Americans to specifically do two things. First, he asked that we celebrate Patriot Day in America by volunteering, contributing to an organization or cause important to you, to go out of your way to help others, and to do something, anything, to make your community a better place...So, I’d ask those of us gathered here today, those watching from home, and those who will perhaps read or hear of our ceremony later today or tomorrow, to take the opportunity in the near future to celebrate Patriot Day in your own little way by giving back or doing something simple to improve our community, or by helping out a neighbor, and to remember and acknowledge how lucky we are to live in this great community in this wonderful country, something we all, way too often, take for granted.”

And secondly, Barlow said, the day was meant to honor and remember that day’s many acts of heroism and the lives of the thousands who perished.

Finally, he said, “I’m proud of our state, I’m proud of our country, and I’m proud to be an American. And I make this point because 19 years ago today, terrorists tried to bring out the worst in our country and instead, brought out the very best. And here we stand, defying their attempts 19 years later, still remembering and memorializing those we lost, honoring those who acted heroically, and highlighting just how strong our country really is.”

Oswego Police Chief Phillip Cady praised the memorial and added, “Generations to come will know that the Oswego community has not forgotten Sept. 11, 2001.”

The morning’s memorial service, attended by many members of the community, came to a close with a blessing preceded by a sound held dear by firefighters, the sound of a bell. And so, a bell rang out three times followed by a pause followed by a second three rings and a pause, ending with a third three rings, as was said, “in memory of and in tribute to their lives and service.”

The memorial service was preceded by a very well-attended, pre-dawn, procession of numerous fire engines and police cars, flagbearers and uniformed first responders at attention. Crowds lined the street from East First to West First as Oswego’s finest slowly and respectfully made their way from the Eastside Fire Station and across the Bridge St. bridge.