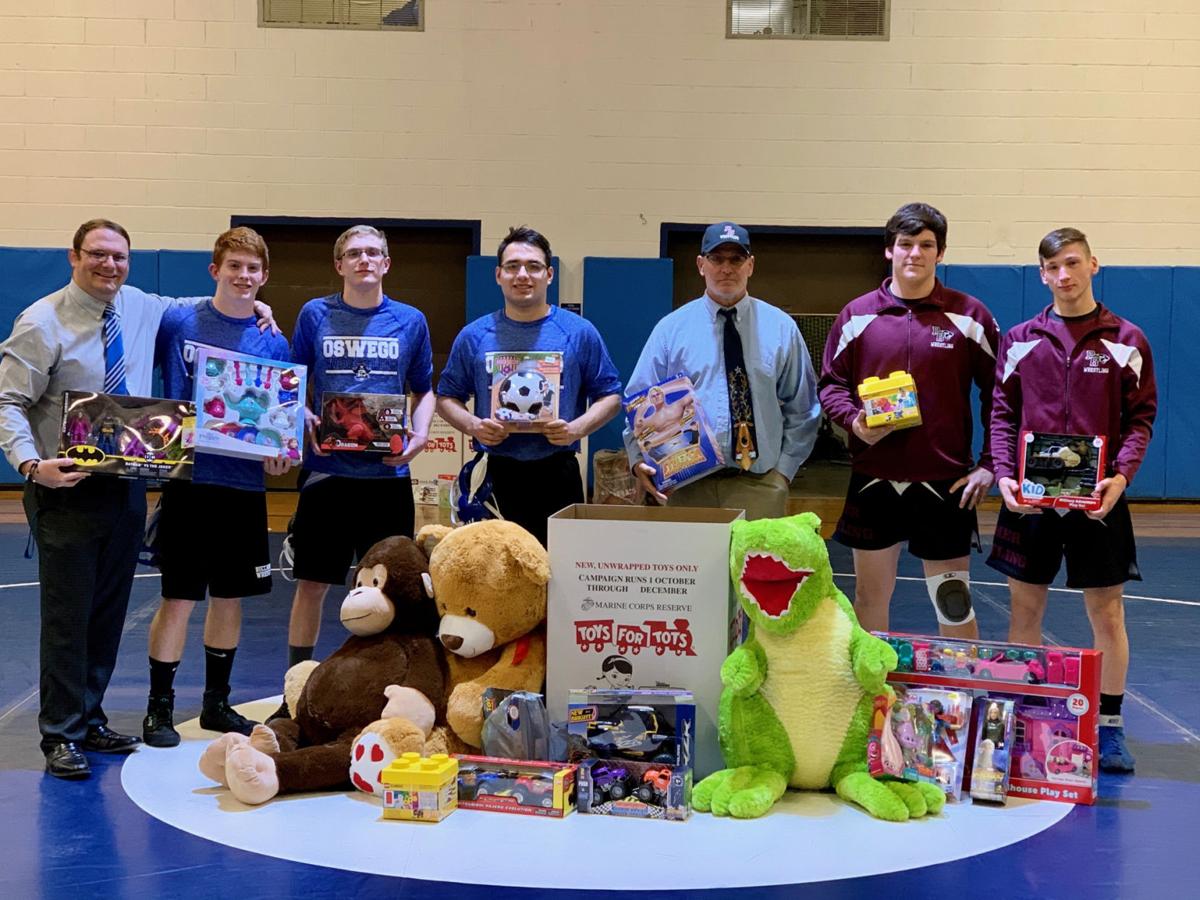 Representatives from the Oswego (left) and Port Byron (right) varsity wrestling teams pose with some of the items donated during the Buccaneers’ annual Toys for Tots fundraiser on Dec. 13 at Oswego High School. Photo provided by Mike Howard 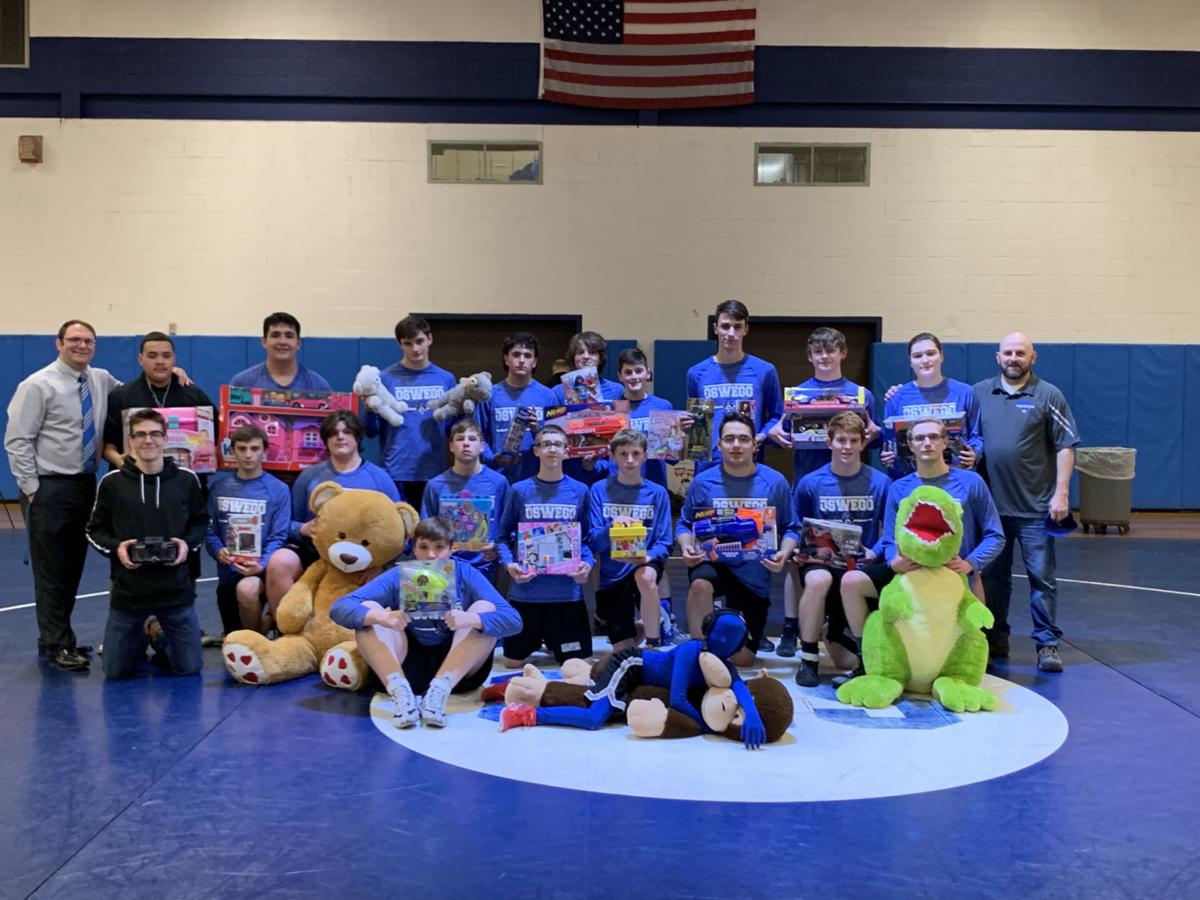 The Oswego varsity wrestling teams poses with items donated during their annual Toys for Tots fundraiser in a match against Port Byron on Dec. 13 at Oswego High School. Photo provided by Mike Howard

Representatives from the Oswego (left) and Port Byron (right) varsity wrestling teams pose with some of the items donated during the Buccaneers’ annual Toys for Tots fundraiser on Dec. 13 at Oswego High School. Photo provided by Mike Howard

The Oswego varsity wrestling teams poses with items donated during their annual Toys for Tots fundraiser in a match against Port Byron on Dec. 13 at Oswego High School. Photo provided by Mike Howard

OSWEGO — The Oswego High School varsity wrestling team spent much of the past month grappling with any potential holiday-season struggles of area families in need.

The Buccaneers recently held their fifth annual toy drive in conjunction with the Marine Toys for Tots Foundation, which was one of several outings in a series of charitable activities performed by the team throughout the Christmas season.

Oswego wrestlers also volunteered to pack food boxes for the Salvation Army earlier this month, and spent the Thursday before holiday break reading to young students at the Fitzhugh Park Elementary School to contribute to the national Cuddle Up and Read initiative.

“They’re looking for ways to get out there and promote community service and giving back, so we kind of set them up with a few things and then they take the ball and run with it, and that’s really great to see,” said third-year Oswego varsity wrestling coach, Mike Howard. “The fact that they’re coming to me now with these ideas, it’s really awesome.”

Oswego claimed a 63-21 victory over Port Byron during the fundraiser match on Dec. 13 at Oswego High School to improve to 3-4 overall, and each team along with fans in attendance filled several bins of toys to donate to the Toys for Tots charitable organization.

Oswego’s annual toy drive started during the 2015-16 school year and was spearheaded by former wrestler and 2016 graduate, Zac Caruso, who is now an active member of the Marines, along with former coach Kurt D’Angelo.

“It just seemed like the perfect thing to do because it helps out a lot of kids in the area, and also it brings out a ton of Marines and lets them get out in the community and start helping with things,” Caruso said.

“It’s cool to see that a fundraiser that we know as Marines is very important and helps out so many people, to see that the school wrestling team that I’m so proud of and helped me become the person that I am also takes pride in it and they do it every year,” he added.

Caruso recalled the initial toy drive against Central Square during his senior season as an overwhelming success. He remembered staring at numerous boxes full of toys that were donated by members of each team and fans from both programs.

“There was really good participation throughout the community, it was probably one of our more popular dual meets,” said Caruso, who secured a pair of top-five Section 3 Class A finishes during his high school wrestling career. “Everyone showed up and was donating toys, but my favorite part about it was that we wrestled Central Square that night, and they found out ahead of time and brought a bunch of toys, so it made the donation even more because the opposing team saw the greater good instead of just trying to come in and win a dual meet.”

D’Angelo’s team held the Toys for Tots event again the following year, and Howard was determined to continue the tradition when he took over the varsity wrestling program. Howard also received help from Caruso during his first year as coach when the former standout wrestler returned home for the holidays and dressed as Santa Claus to deliver presents to members of the youth wrestling program.

“(Caruso) really had a huge heart and decided that this was something he really wanted to invest in and give back,” Howard said. “I remember I was coaching modified and being inspired by him, sacrificing the time and the energy to promote this and get it started.”

Oswego junior Jacob Garcia participated in the University Police Dodgeball Tournament at Oswego State University earlier this month to benefit the SUNY Oswego Toy Drive. He suggested to Howard afterward that the Buccaneers participate as a team or enter multiple squads in that tournament next year and beyond.

“I think it’s a huge thing to show young adults what they can do and the impact they can make,” Howard said. “It just starts piling up and it’s really great because they get a whole wide experience of how to give back, how to sacrifice a little bit of their time to help out others, and throughout it all it also helps with the team bonding experience.”