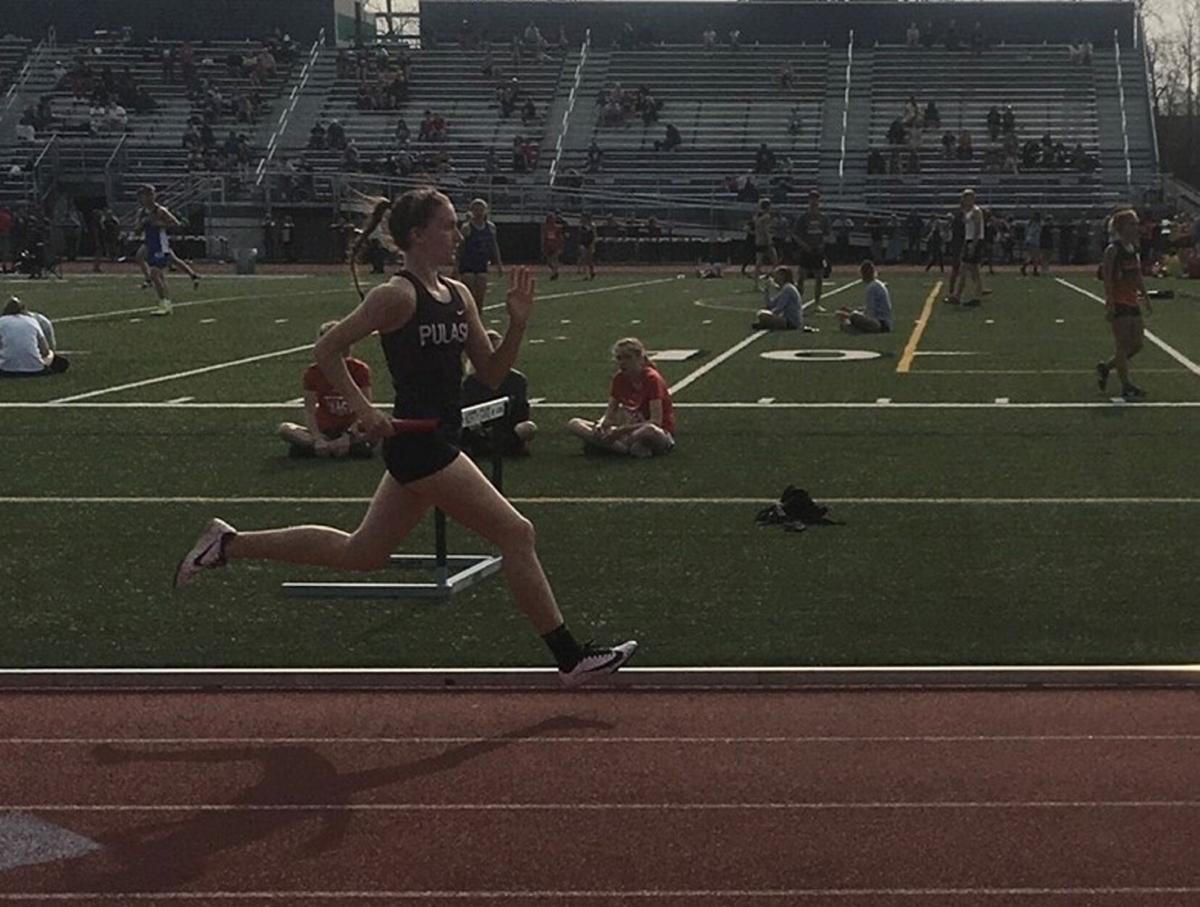 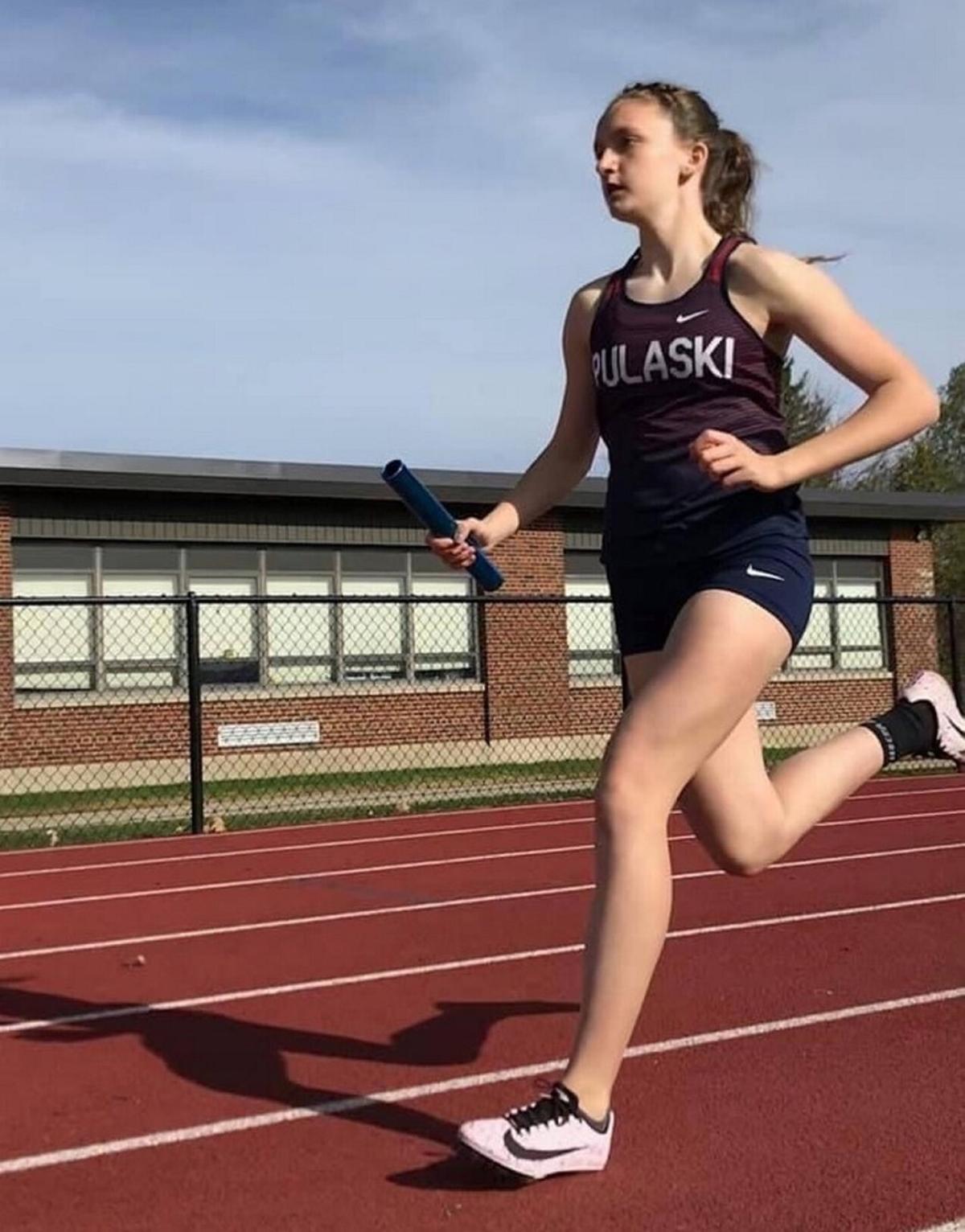 PULASKI — At the start of every meet in her most recent track and field season, Cassidy Phillips was approached by a hesitant teammate to borrow the old running spikes that Phillips no longer used.

Phillips always obliged and the Pulaski Academy and Central School High School senior is now aiming to extend that generosity throughout the district and beyond.

Phillips recently started the “Play It Forward,” campaign as part of her senior project to develop a system that allows area student-athletes to obtain sports equipment that they or their family would otherwise not be able to afford or acquire.

Phillips, who is a leader and top performer for the Blue Devils track and field and cross country teams, said that experience during her sophomore spring along with missing her junior track season last year at the onset of the COVID-19 pandemic helped spark the mission for Play It Forward.

“It almost broke my heart a little, and there are people that can’t afford equipment for their sports, I know it sucked having my season taken away from me but never being able to play a sport, I couldn’t imagine it,” Phillips said during a recent phone interview.

“I started this because with the pandemic last March, I got my track season kind of taken away from me and we were on pace to break records in both of my relays,” Phillips added. “But that just made me realize that some kids don’t get to play sports at all because their families can’t afford the equipment, even running shoes are stupid expensive, so I wanted to give them a way to be able to play sports.”

Phillips is accepting new or gently used sporting gear which will then be redistributed to aspiring athletes that need the assistance in the area. She is asking for donations to be dropped off at Designs of Elegance, which is the flower shop owned by her mother, Robin Phillips, in Pulaski.

She has received strong feedback thus far and gained several pairs of shoes and cleats.

Phillips said that her goal is for students to be able to approach a coach or guidance counselor to express their equipment needs, eliminating economic hurdles that exist for families in several sports. She hopes to make the program a permanent fixture at Pulaski and for requests to be as anonymous as possible to encourage students that may be too shy to ask for help.

“I want to be able to set up a way that it will be around in the school for a while,” Phillips said. “I don’t want it to just be for my senior project, I want to help kids in the future, too.”

Phillips placed her energy into brainstorming the Play It Forward concept following the heartbreak of a lost junior season in track and field last spring. She was one of the four returning members of Pulaski’s Section 3 champion 1,600 relay team, and the second-place 3,200 relay grouping, all of whom were back eyeing school records for the next season.

She was among the team leaders that spent five nights per week training during the offseason before the COVID-19 pandemic shut down schools last March and ultimately canceled the 2020 spring sports seasons throughout the state.

“She was one I was so heartbroken for last year because she worked so hard in the winter getting herself in shape, getting stronger, I thought she was going to have a really good year last year, and through that, she’s just one of the team leaders and she’s very loyal to our program,” said Pulaski varsity girls track and field coach, Jordan Fahnestock.

“She has bounced back pretty good and hasn’t let it deter her from what she’s trying to do for her senior year for track,” Fahnestock added. “Whenever we are able to be in the weight room, she is there, she’s definitely refocused and ready to go, and we’ll see what she can do this year when the time comes.”

Phillips is also a member of the National Honor Society and the Pulaski Varsity Club. She was happy to run cross country this past fall as one of a handful of participating Oswego County teams, completing a condensed schedule with four meets last October.

“It was really nice to be able to even just go to practice and be with my team,” Phillips said. “If you’re on a team, you are part of a family, honestly, you create bonds and friendships with your teammates, and just being able to get away from the pandemic, I guess, at practice, it was amazing.”

Phillips’ desire to help is not limited to classmates or even her fellow human beings as her career goal is to become a large-animal veterinarian. She is hoping to run track and field while studying biology to begin her path in college, leaning toward Alfred State University, where her application has already been accepted.

Phillips has been on rotation at an area animal clinic through the New Vision Specialized Career Program at CiTi BOCES. She also grew up on a farm and has fond memories of bottle-feeding calves while joining her dad and grandfather in the barn.

“Most of the time they were bigger than I was, but you would bottle-feed them, and they curl up at your feet like a dog, it was amazing,” Phillips said. “Growing up on a farm, you get kind of used to being around the big animals, and I have always loved all kinds of animals.”