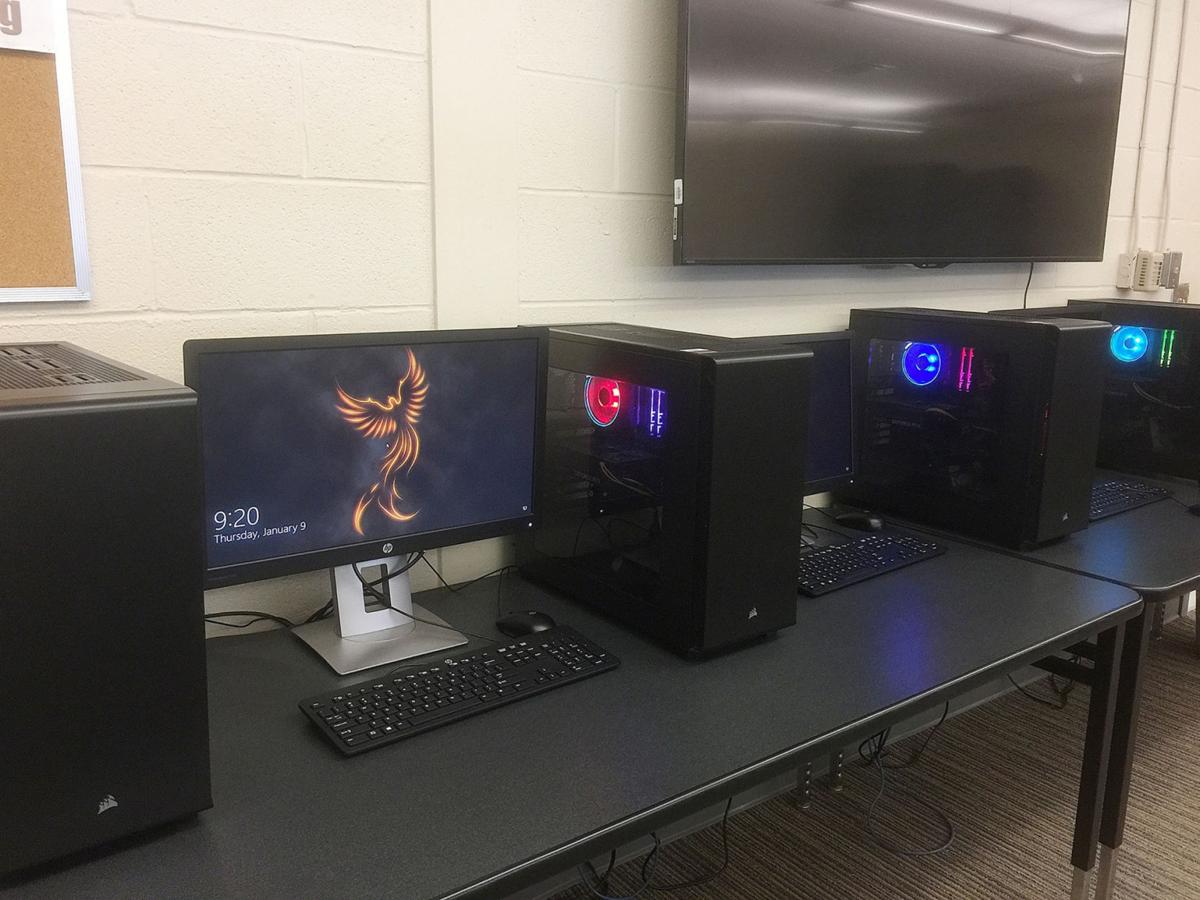 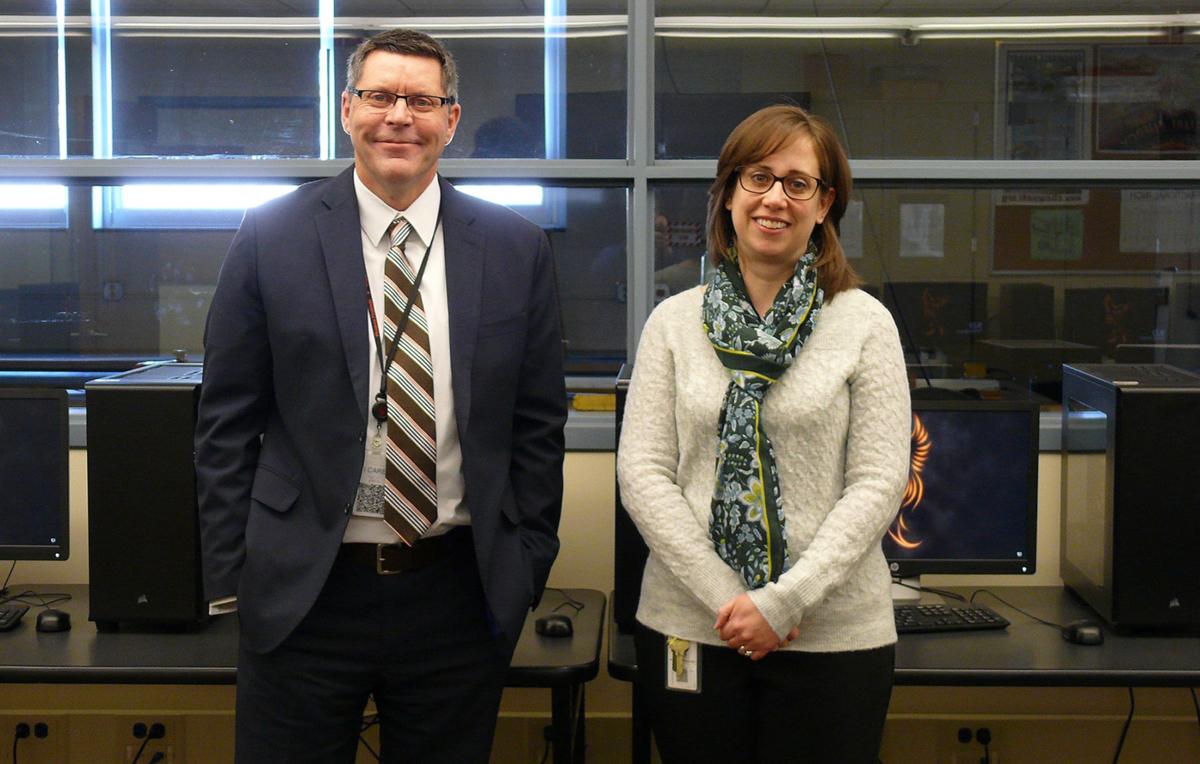 Robert Edwards and Nicole Covell are bringing esports to Phoenix, the first school district in Oswego County to have an esports team. Randy Pellis/Oswego County News

Robert Edwards and Nicole Covell are bringing esports to Phoenix, the first school district in Oswego County to have an esports team. Randy Pellis/Oswego County News

For many schools, just keeping up with the present is hard enough, and others can even be stuck in the past. But the Phoenix Central School District’s Director of Data, RTI & Instructional Technology Nicole Covell is solidly in the future. She sees video gaming for what it is and for what it can become. And so does the district’s Executive Director of Instruction and Personnel Robert Edwards.

Together Covell and Edwards are launching esports teams at John C. Birdlebough High School in Phoenix, not clubs, teams, as in a football team, baseball team, wrestling team, etc., a real team on par with every other varsity team, or so they hope for the not-too-distant future. And that future is happening fast.

“Esports is a billion-dollar industry,” said Edwards. “Some of these esports events are worldwide, global phenomena, and the trend is moving very fast. So, we thought this was a good opportunity and the right time.”

According to Covell, numerous colleges now have full-fledged esports teams. Syracuse University has an esports club.

“Kids who are really solid at esports are getting college scholarships now,” she said. “It’s just another opportunity for kids to take another path to college.”

Furthermore, according to Edwards, research has shown that students who take an interest in esports go on to pursue careers in science, technology, and math, not to mention careers in esports.

Phoenix currently doesn’t have an active coding course, for instance, but, Edwards noted, they’ve “started to explore, and look at, and research courses that other schools and other places teach: game theory, game creation, and all of the marketing strategies that go along with the esports world right now. It’s a full-on, career-potential world.”

Just Google “esports careers.” A quick search found 53 related jobs ranging from esports coordinator at SU to head esports coach at Felician University in New Jersey to esports game designer intern in Pennsylvania to esports news writer in Saint-Laurent, Canada to assistant professor of esports management at the University of New Haven in Connecticut to esports apparel sales associate in New York City, and hardly last and certainly not least, to a team of Ph.D. scientists, software engineers, and game vets who’ve come together from places such as New York University, Massachusetts Institute of Technology, Nintendo, and Fortnite to form a gaming software company looking for a lead backend engineer who is interested in neuroscience, artificial intelligence, and data science. Get the picture? This is just the beginning.

And it’s about to begin in Phoenix.

Covell and Edwards studied esports, are somewhat gamers themselves, though they wouldn’t call themselves “active” gamers, and proposed the idea to Superintendent Christopher Byrne and Assistant Superintendent of Finance & Educational Services Karl Seckner. Both supported the idea, “and,” said Edwards, “we moved forward.”

They’ve joined the gaming platform PlayVS that calls itself “The Official High School Esports League” and is, according to Edwards, trying to become state sanctioned. PlayVS offers spring and fall eight-game seasons against teams up and down the East Coast culminating in a playoff and championship round. Opponents are randomly assigned. Some have been at this a while. Others are brand new at it.

Games are once a week. There is a two-week preseason. If Phoenix qualifies, it’ll go into the post-season as part of a 32-team playoff bracket. All games take place in the virtual world of cyberspace, students playing from their home school, except for the championship, set to be played in an as-yet unnamed city, maybe even Phoenix.

This district may be new to esports, but they are hardly at a disadvantage when it comes to equipment. Phoenix has two state-of-the-art computer labs, side by side, each sporting 20 very-well equipped computers with large monitors powered by the best graphics cards, at their Emerson J. Dillon Middle School, a short distance from the high school.

“These are probably the most powerful computers we have in the district,” Covell noted.

“We are very fortunate in this district,” she continued. “We have an assistant superintendent of finance who feels very strongly in providing our students with the best technology.”

“Rocket League would be comparable to a soccer game,” said Edwards. “It looks like rocket cars trying to push or kick a soccer ball through a goal. It’s two teams playing against each other and it’s like soccer. League of Legends I would equate that more to a Capture the Flag game where your objective is to knock down the other team’s tower.”

Presently, students are supplying their own headsets “because,” Covell said, “they are gamers and they have certain headsets that they prefer.”

“We wanted to make this initially easy for kids to join with no stress, said Edwards. “We didn’t want any financial burden.”

The headsets “allow the team to talk to each other through the game,” Covell said. “The games are very big on strategy, teamwork, thinking logistically and planning your moves ahead of time. It’s very much a team sport. They have to work together as a team, or they’re not going to be successful.”

“They’re going to have to work together to really strategize,” said Edwards.

Covell and Edwards have encouraged students who know nothing about these games to join, which is why they are holding practice sessions. “Some of our kids do not have this technology at home,” said Covell. “So, we have these practice sessions so they can get used to the game and figure it out prior to the season starting.”

Tryouts were held Tuesday, Jan. 14 with the possibility of another tryout day for those who couldn’t make it on the 14th.

Everyone will be afforded a place in this endeavor. No one gets left out, Covell and Edwards said.

“We can accommodate about 30 students right now,” Edwards said. “We’re actually going to work in an intramural setting on Wednesdays. So, if we did have some kids that maybe are totally unfamiliar, have no experience with what this is at all, but just want to be part of it, we’re going to bring them actually on to the team, and then our Wednesday night will just be kind of like open play practice. We want all involved that we can have.”

Although there is a financial cost to all this, the Phoenix school board did not have to provide any money to get this project underway, nor did the students, nor will they throughout the season. All costs are being covered by federal Title 1, Title 2, and Title 4 grants, according to Edwards.

“We do plan in the future that we will be funding some coaching positions, but that will be pending board approval,” said Edwards.

Preseason will be the first two weeks of February. The season’s first game is scheduled for Feb. 18. Covell hopes to be able to live-stream all games of this first season.

As of now, Phoenix is signed up only for this spring season. The future of the fall season remains to be seen, but certainly Edwards remains optimistic.

“We anticipate moving forward into next year, we’re going to field teams for both of those seasons,” he said.