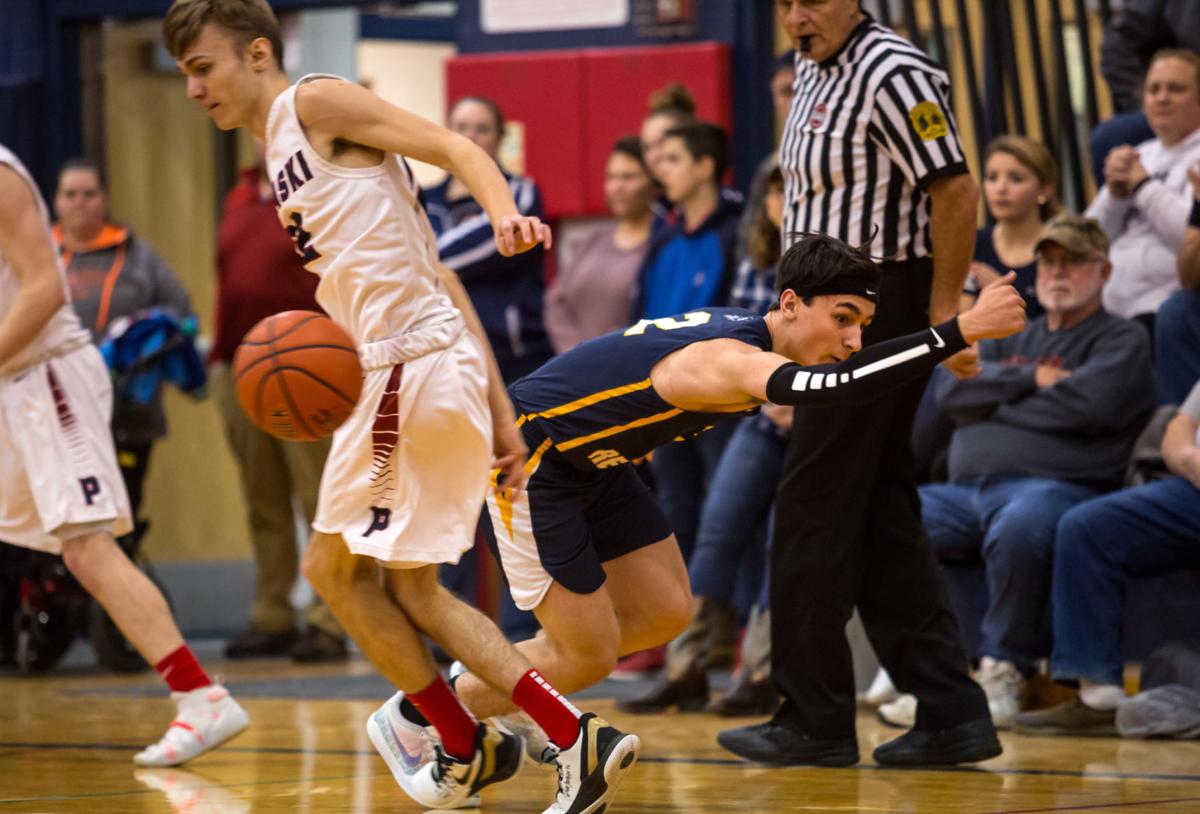 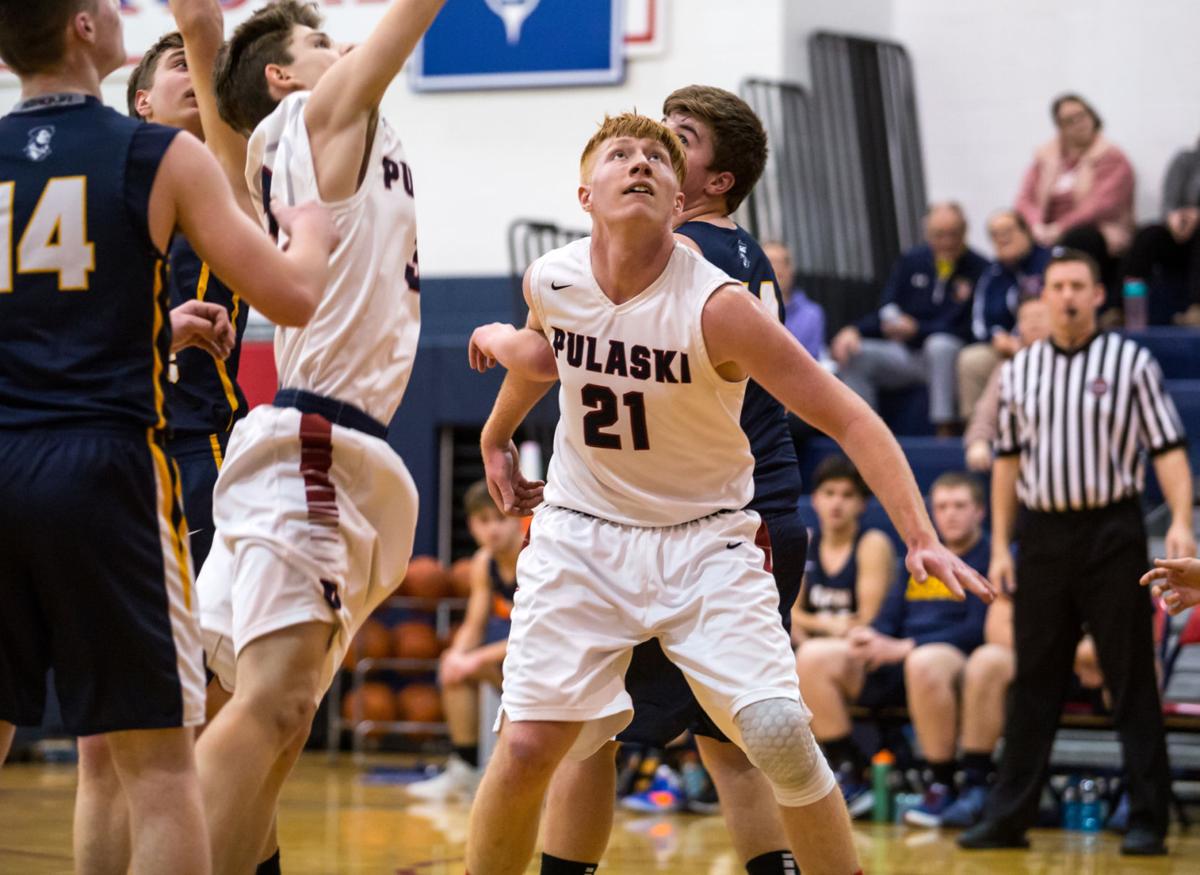 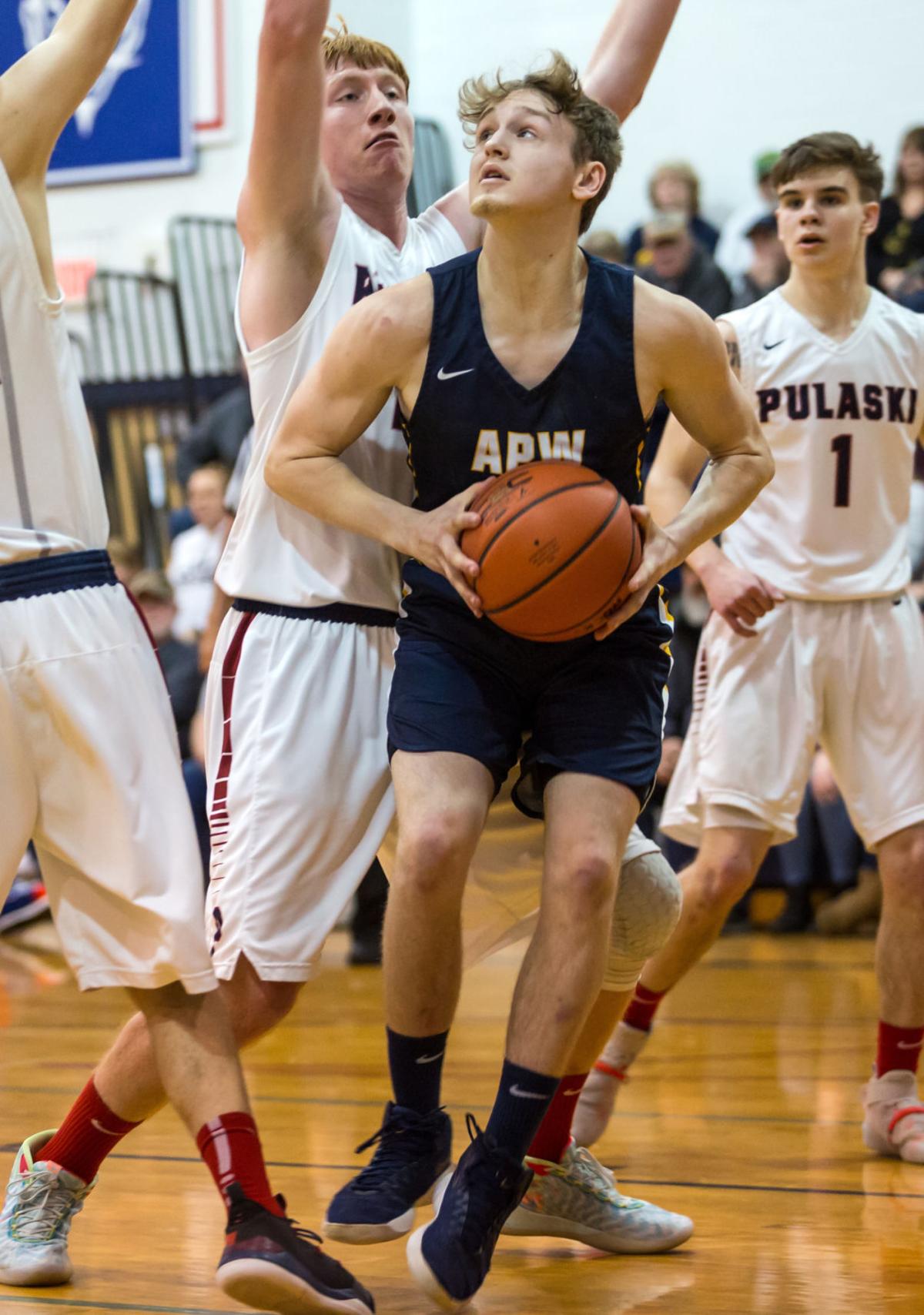 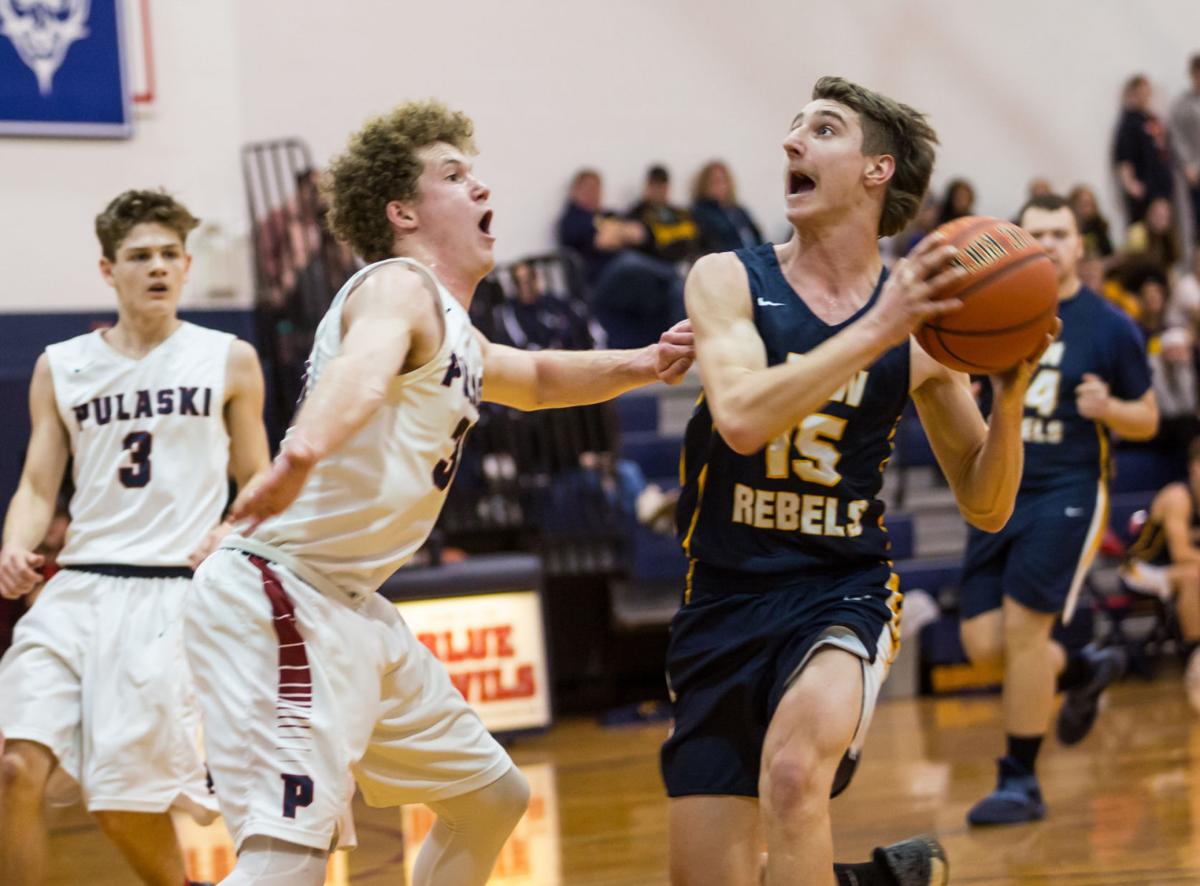 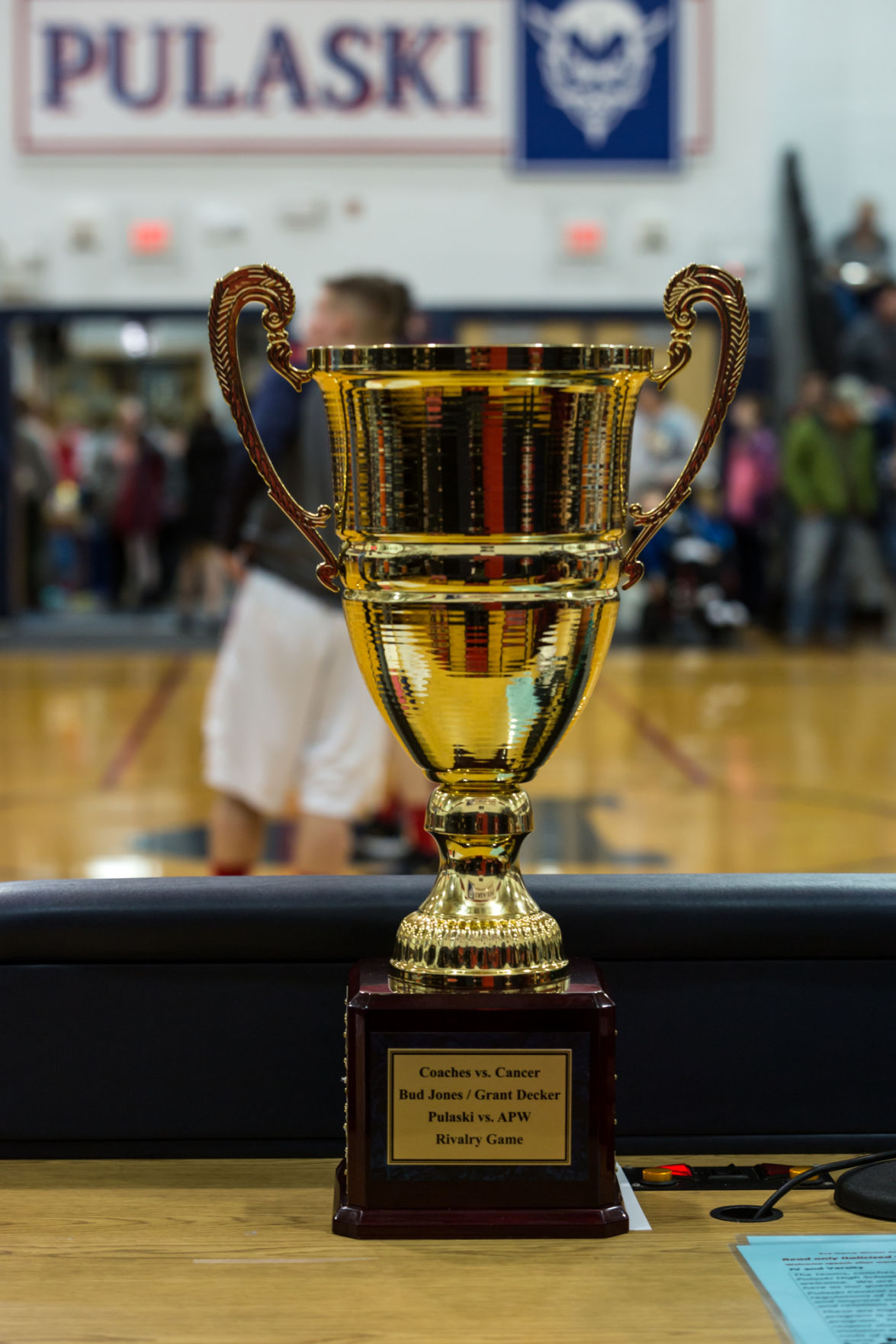 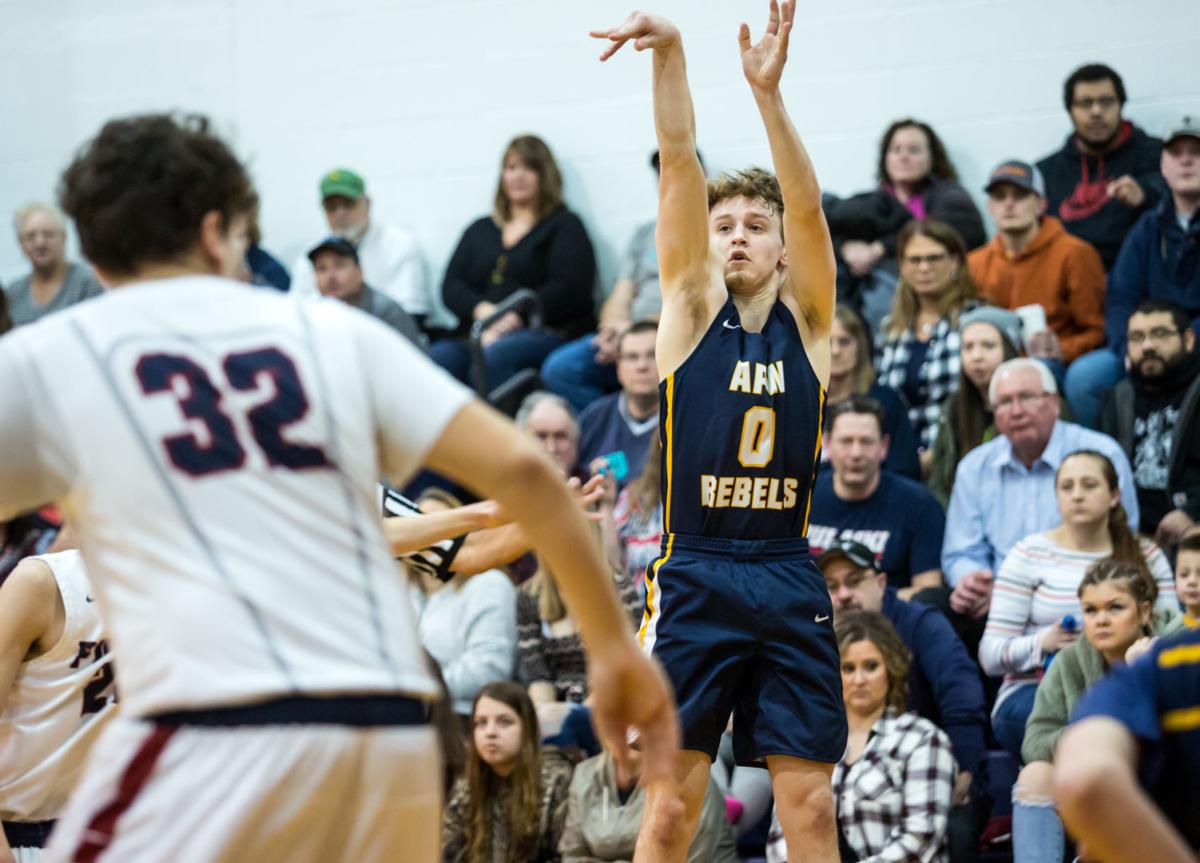 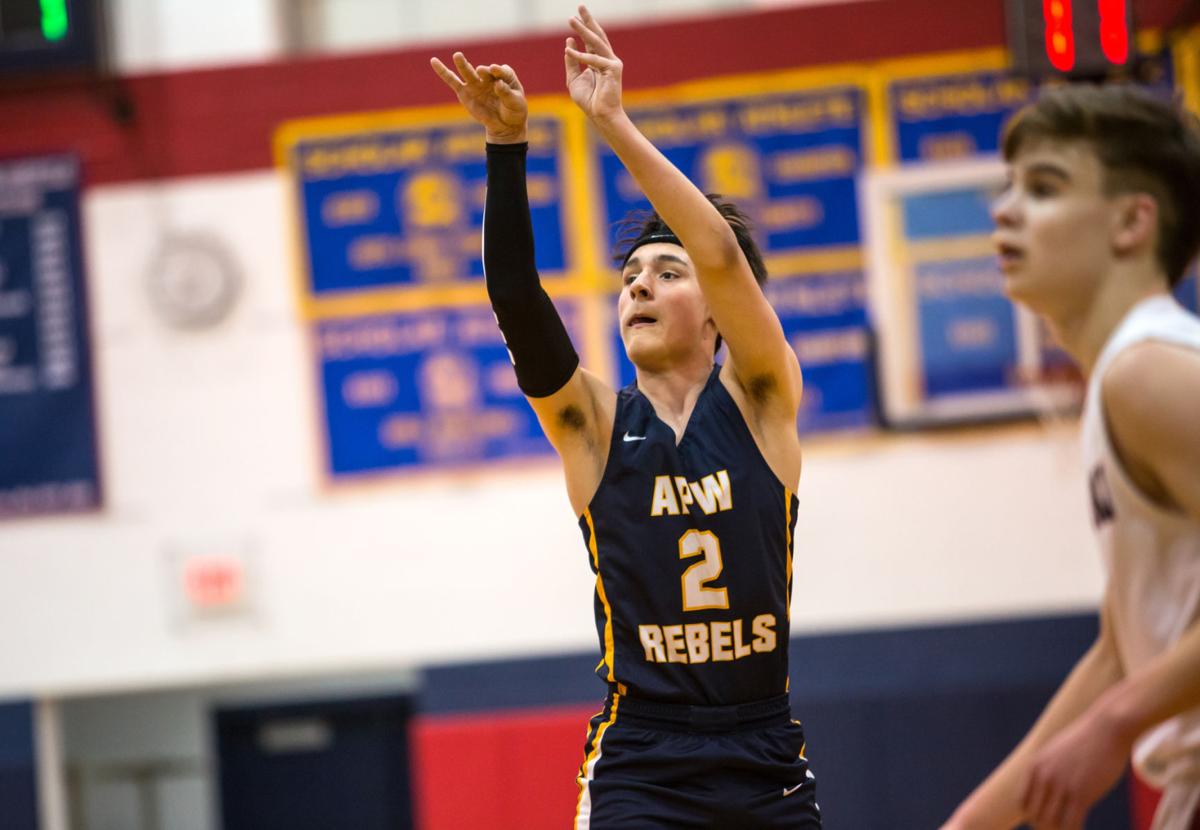 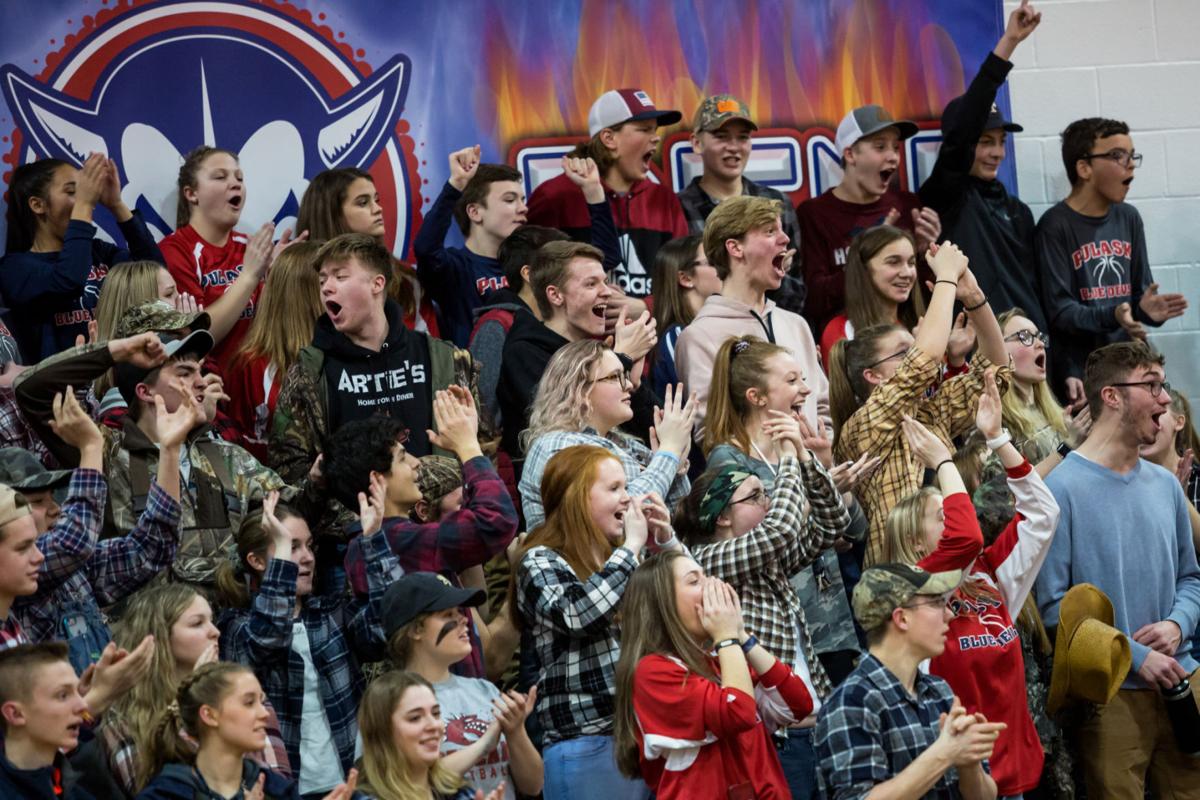 PULASKI — Grant Decker took the microphone at the end of an exhilarating matchup between longtime area boys basketball rivals Pulaski and Altmar-Parish-Williamstown on Monday night, and excitedly expressed a sentiment shared by most in the enthusiastic crowd at Pulaski High School.

“Wow, what a game, just like it used to be,” proclaimed Decker, the former long-tenured APW coach.

Pulaski senior Izaih Mullins scored 12 points, and the Blue Devils connected on 17 free throws en route to a thrilling 45-42 victory over the Rebels to claim possession of the “Bud Jones/Grant Decker Cup,” for the first time following the third annual rivalry game played for the cherished trophy.

The area programs, which have been sometimes heated and always competitive rivals for more than 50 years, nearly filled the stands at the Pulaski gym and each had its school mascot in costume on their respective sidelines.

“It’s a once in a lifetime opportunity knowing how famous (Grant Decker and Bud Jones) are around here and how much of a rivalry this is, it’s definitely good when we can win this game,” Mullins said.

“It pumps everyone up, even people in the stands clearly, it’s just all-around fun and games for the fans and a lot of fun to play in,” he added.

Decker and representatives from the Jones family each spoke briefly and presented the trophy to the winning team after the electrifying encounter. Jones’ grandson, Pulaski junior Landon Jones, accepted the cup on behalf of his team following the win.

Decker and Bud Jones, the longtime Pulaski boys varsity basketball coach who died in November 2017, led their respective programs into perennially intense matchups against each other for more than 30 years.

“I thought it was a fantastic game and great effort by both teams, and I was impressed with the students in the stands because they were well-behaved and in sync,” said Susan Jones-Deegan, the oldest daughter of Bud Jones.

“He would be so proud of the team tonight,” she added. “(This rivalry) was long-lasting for years, and it was always very important to him to beat Grant Decker.”

Pulaski (6-9 overall) possessed a 41-33 advantage with a minute left before APW threatened a monumental comeback. Junior Ben Ostrander knocked down a contested 3-pointer to trim APW’s deficit to 41-36, and Charles Stanard followed with a shot from deep on the next possession to cut the Pulaski edge to 41-39 with 25 seconds left.

Ostrander eventually banked in a 3-pointer with 12 seconds left to trim the Blue Devils’ advantage to 43-42, but Mullins made both free throws on the other end and the Rebels (4-12) were unable to make a potential game-tying 3-pointer in the closing seconds before the buzzer sounded.

“Nothing really surprises me because it’s APW versus Pulaski, so even when you have an eight-point lead with a minute or so left, you know it’s not safe because anything can happen,” Pulaski coach and alum Jordan Fahnestock said. “Throughout the 50-plus years of this rivalry, stranger things have happened, so at that point we’re just trying to string together anything we can offensively but they’re coming down and making shots, banked in a 3-pointer, and sometimes there’s nothing you can do about that.”

APW coach Mike Martin added: “They made free throws and we didn’t, and that was the main difference in this game. The kids played their hearts out, kept playing hard and I’m proud of our guys. We were down seven with about a minute left and they made a heck of a run. It was a great game.”

The two districts agreed to create the trophy and name it after the pair of area coaching icons soon after Jones’ death and Decker’s retirement.

“It was just the perfect time to find a way to honor those two guys because for 30 years, they battled each other, and they’re the reason that this rivalry is what it is because of both of their dedication to these programs,” Fahnestock said.

Decker recalled the annual rivalry providing some of the most memorable games of his coaching career, and said that throughout much of the 1980s and ‘90s, the gym would fill so quickly that each school set up TVs in the cafeteria for fan overflow to watch the game. Fans would have to arrive nearly an hour before the junior varsity game for any chance at a bleacher seat, Decker said.

Decker said that during one game in 1994 — when the Rebels pulled off a 16-point fourth-quarter comeback against the then state-ranked Blue Devils — he had to take his team to the foul line to speak during a timeout because the crowd noise was so deafening.

“We had college coaches come to these games and the University of Rochester coach once told me that he wished he had what we had here, and that was the environment,” Decker said.

“Bud Jones’ teams were always prepared, always played hard, and they played the game the way it’s supposed to be played,” Decker added. “He always had his teams prepared so he was very tough, but those games, gee whiz, I can’t begin to describe how great it was.”

Fans from each school provided limitless energy throughout the game. Pulaski students, who were mostly dressed in camo and flannels for their theme of the night, danced and sang along to country music during every timeout and between quarters.

Halftime featured a 3-point shootout between the mascots, which ended in a scoreless tie, and the national anthem was played on electric guitar by Pulaski junior Skyler Gorman, who then contributed five points for Pulaski in the victory.