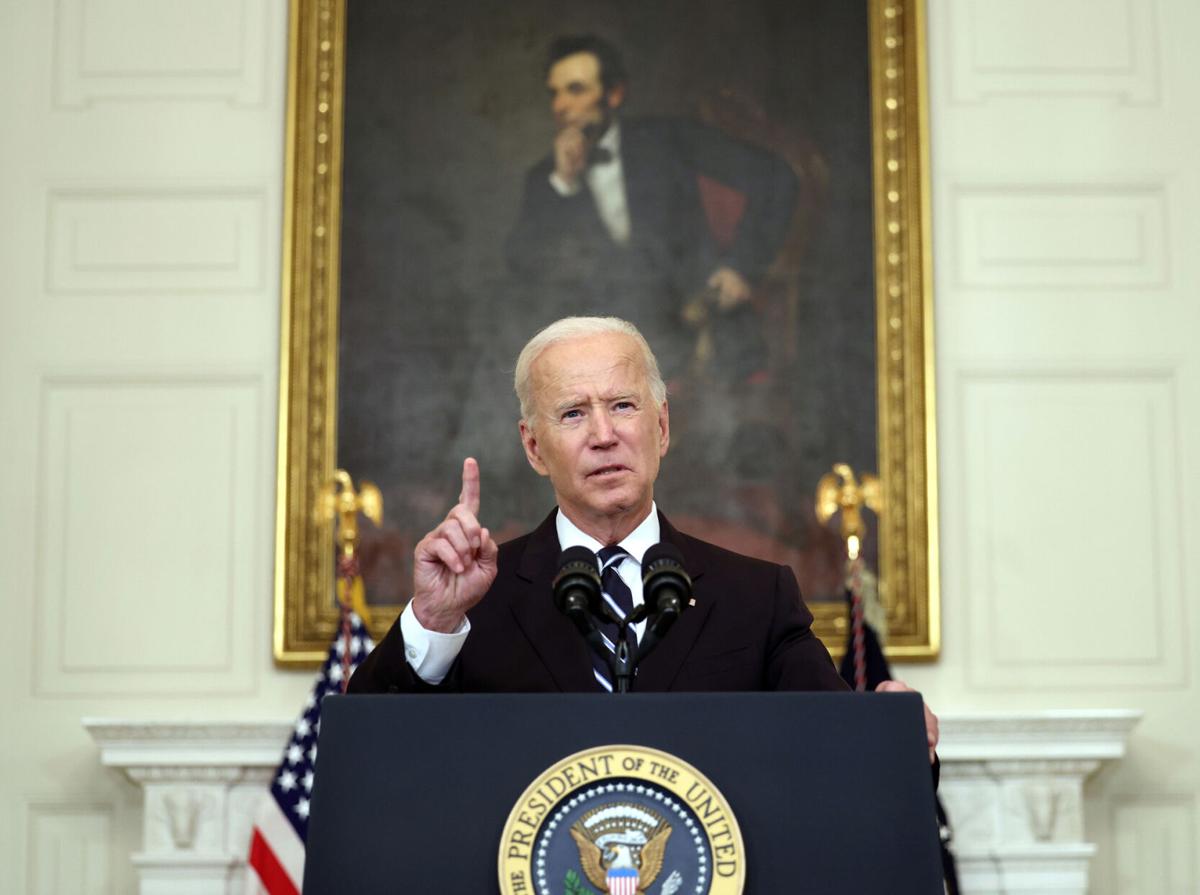 President Joe Biden speaks about combating the coronavirus pandemic, in the State Dining Room of the White House on Thursday in Washington, D.C. Kevin Dietsch/Getty Images/TNS 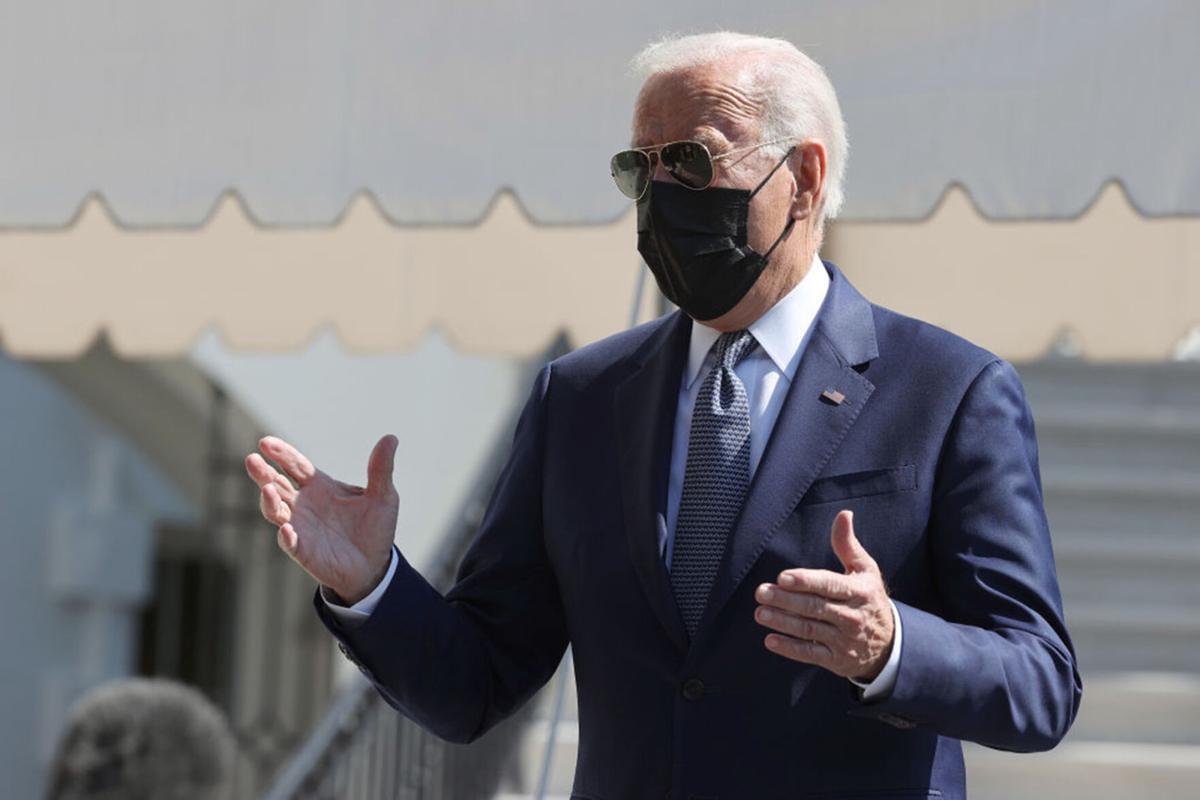 U.S. President Joe Biden talks to reporters on the South Lawn of the White House on Sept. 3. Chip Somodevilla/Getty Images/TNS

Should the government mandate vaccination for employees?

WASHINGTON — Workers at companies with more than 100 employees will be required to get a COVID-19 vaccine or submit to weekly testing under a new rule President Joe Biden unveiled Thursday — but is it feasible?

The rule applies to over 80 million workers in the private sector and falls under Biden’s six-part plan to combat the spread of the coronavirus.

“What more is there to wait for? What more do you need to see?” Biden said during a news conference announcing the plan. “We’ve made vaccinations free, safe and convenient. The vaccine is FDA approved. Over 200 million Americans have gotten at least one shot. We’ve been patient, but our patience is wearing thin.”

Employment law experts speculated in interviews with McClatchy News on whether the president has the power to implement such an expansive decree — one called it a “real stretch” — and what it might look like.

But they agreed a legal challenge was likely.

“This raises more questions than it answers, both legally and practically,” said Dan Bowling, a senior lecturing fellow at Duke University’s School of Law.

The president has directed the Occupational Safety and Health Administration, otherwise known as OSHA, to draft a rule that would require employers with 100 or more employees to institute a vaccine requirement.

Workers who choose not to get vaccinated for whatever reason will be subject to weekly testing.

Employees will be given paid time off “for the time it takes for workers to get vaccinated or to recover if they are under the weather post-vaccination,” according to Biden’s announcement.

The rules will be issued as an “Emergency Temporary Standard.”

Faith Whittaker, chair of the employment practice at Dinsmore & Shohl in Ohio, said OSHA already had vaccine guidelines in place for private sector employees. Though the exact text of the rule hasn’t been released, she said it’s “essentially making what OSHA’s guidance is already into law.”

OSHA operates under the U.S. Department of Labor and oversees workplace health and safety regulations.

Not all employees are subject to OSHA’s rules, but the agency provides basic equipment training and sets workplace safety standards.

Unlike the Internal Revenue Service or the Securities and Exchange Commission, OSHA doesn’t have an expansive investigative department or as serious criminal penalties, Bowling said.

“OSHA isn’t going to come in and shut down a business because the vaccine mandate wasn’t strictly enforced,” he said.

Companies that don’t comply with the rule, however, could be fined up to $14,000 for each violation, according to the Society for Human Resource Management.

Biden said the vaccine and testing mandate will impact about 80 million workers at companies with at least 100 employees.

Whittaker said the rationale behind the 100-employee threshold is likely to prevent further spread of COVID-19 at companies with a large employee base where the virus is more easily transmissible.

There are employers who aren’t covered by OSHA, but she said that “can get very complicated.”

Combined with Biden’s vaccine requirements for federal and health care workers announced Thursday, about 100 million people — or two-thirds of the American workforce — are affected by the new regulations.

As of Sept. 9, 64.5% of adult Americans, or around 166 million people, are fully vaccinated against the coronavirus, according to the Centers for Disease Control and Prevention.

Since the vaccine and testing requirement will be developed by OSHA, Whittaker said it “would be enforced the same sort of way from the Department of Labor standpoint.”

That could mean enforcement by conducting inspections “based on imminent danger situation, fatality, or a worker complaint,” according to OSHA’s website.

There are also 22 states with their own OSHA plans. In North Carolina, that means enforcement of Biden’s rule would fall to the N.C. Labor Commissioner, a Republican, The News & Observer reported.

Bowling said enforcement across the board could prove difficult.

“If somebody falls off a ladder that was broken in a place of business and breaks his or her leg, that’s pretty easy to prove employer liability. The employer would have to report the accident under OSHA,” Bowling said. “If someone catches COVID who works somewhere that doesn’t follow the vaccine mandate, how do you prove that?”

He also said there are varied reporting requirements under OSHA and the agency’s inspectors would likely be “outnumbered thousands to one” under the new rule.

The reality is that employers could ignore it, Bowling said.

“What’s OSHA going to do about it?” he said, adding, “I’ll be surprised if we see any time soon some company found liable or cited by OSHA for not issuing an immediate mandate on this.”

Montana is the only state in the U.S. to bar vaccination status as a condition of employment, which the state’s legislature deemed “discrimination” under a new law passed this year, the Associated Press reported.

The law would be in direct contradiction with Biden’s order.

“That’s going to become a federal preemption question, which is heavily litigated in and of itself,” Whittaker said.

Employees under the order have the right to refuse a vaccine but would be required to show proof of a negative COVID-19 test every week to come into work.

The testing requirement presents an alternative for those who may qualify for a medical or religious exemption or who otherwise don’t want a vaccine.

If they still refuse and choose to quit or are subsequently terminated, Whittaker said, it would likely be harder for them to qualify for unemployment benefits.

“If they have another option without having some sort of legitimate health reason... to either getting tested or getting the vaccine, unemployment would say you are able-bodied and you chose not to follow the rule,” she said.

Biden said Thursday that he has the “federal authority” to extend certain vaccination requirements in health care settings, but he didn’t address his executive authority as it relates to the workplace requirement.

With an emergency standard under OSHA, Whittaker said the new rule can be pushed through without public comment.

Bowling, however, said the vaccine requirement appears to be “outside the bounds of what OSHA is designed to do,” calling it a “real stretch.”

Bowling and Whittaker said there is a high likelihood of Biden’s vaccine and testing mandate rule being challenged in the courts — particularly given the political climate surrounding the pandemic and related health and safety measures.

There are already legal challenges in the lower courts regarding mask mandates and vaccine requirements, Bowling said.

“For those who oppose this, want to totally ignore it or are willing to be active and try to fight it from a legal standpoint, I think they’re going to be on fairly decent grounds,” he said.