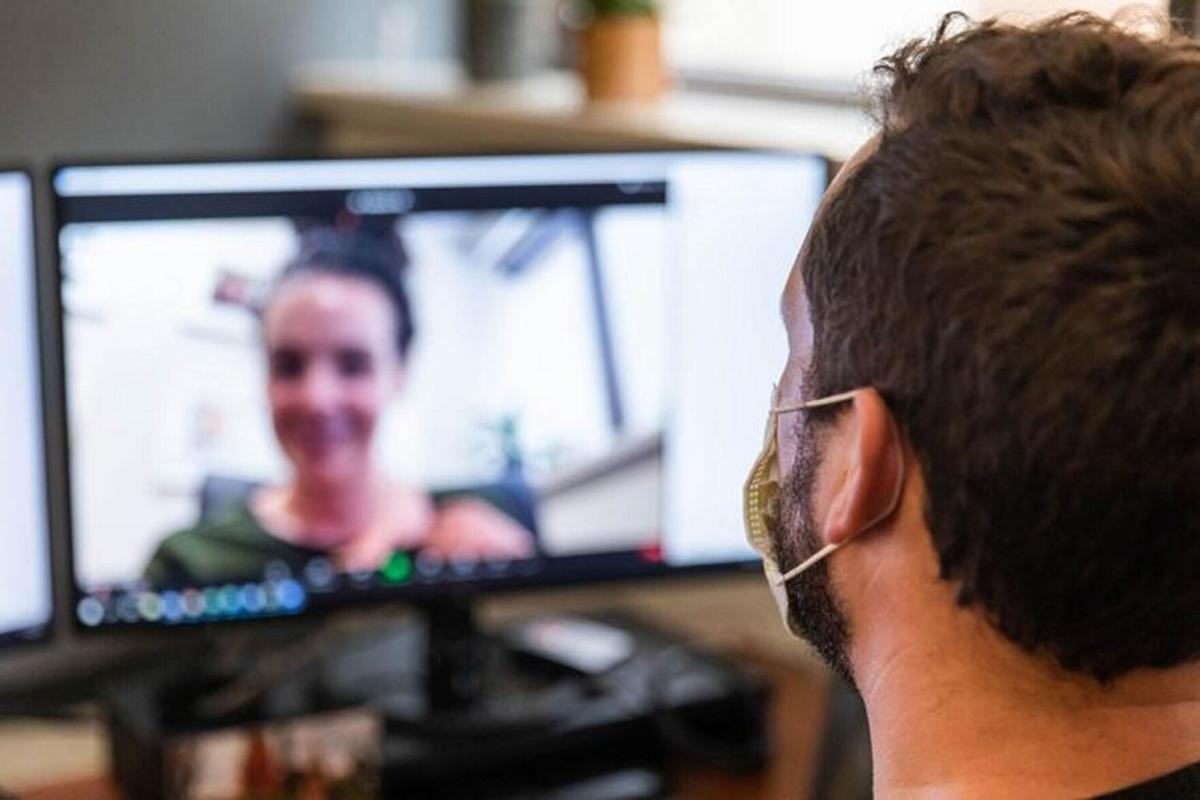 Dr. Nathanial Miletta, who is in the dermatologic surgery department at Samaritan Medical Center, participates in a Zoom call with a patient in his office in 2020. Use of telemedicine in the north country has increased in the past year, with participation rising from 29% in 2020 to 39% in 2021, according to the Fort Drum Regional Health Planning Organization’s latest survey. Watertown Daily Times

Dr. Nathanial Miletta, who is in the dermatologic surgery department at Samaritan Medical Center, participates in a Zoom call with a patient in his office in 2020. Use of telemedicine in the north country has increased in the past year, with participation rising from 29% in 2020 to 39% in 2021, according to the Fort Drum Regional Health Planning Organization’s latest survey. Watertown Daily Times

WATERTOWN — The Fort Drum Regional Health Planning Organization has released the results of the 2021 Community Health Survey of adult residents in Jefferson, Lewis and St. Lawrence counties, with a full report now available.

The survey has been completed every year since 2016, with the intention of supporting and planning future initiatives, monitoring changes within the community and raising community awareness through the process of surveying. Like last year’s survey, conducted amid the COVID-19 pandemic, some of the questions this year were written from COVID-specific and telemedicine angles.

“FDRHPO and other health care stakeholders use this data to develop actionable items that target the north country’s specific health care needs,” said Megan Donato, FDRHPO data analyst, in a statement. “This year, the survey helps provide further insight as to the long-term impact of COVID-19 on the health of the community. We expect that, along with the serious health concern posed by COVID-19, the pandemic has many indirect consequences on an individual’s health.”

She added that while many measures are returning toward normal, such as people regularly receiving health care, it is apparent that there are many health concerns that still need to be addressed.

The sample size in the 2021 survey was 1,622, resulting in an average margin of error of plus or minus 2.5%. According to the survey results, 4 out of 5 north country residents have one person or medical office that they think of as their personal doctor or health care provider, a rate that has remained steady since 2016.

Interest in using things like email, texts, online portals and apps to communicate with doctors has increased in the past two years, doubling from 2019 rates.

Use of telemedicine in the north country has increased in the past year, with participation rising from 29% in 2020 to 39% in 2021. Preference for this practice, though, is less prevalent now than it was when first measured last year, with 1 in 3 residents indicating they would likely choose telemedicine over an in-office visit in 2021, down from 1 in 2 when the pandemic first began in 2020.

In the past year, 1 in 5 respondents report that telemedicine helped them get medical care that they otherwise wouldn’t have been able to receive. When respondents were asked about their greatest barrier to telemedicine, the majority, 35% of respondents, cited that they have no barriers. Among the barriers studied, quality of care was most commonly cited.

A mixed-mode sampling method utilizing random telephone interviewing, online surveying and face-to-face surveying was employed in the study of only adult residents in the area.

All telephone calls were made between the hours of 3 and 9 p.m. in late May and early June using a remote virtual call center. The online versions of the survey were open for 10 days during May and June. The face-to-face sampling on post at Fort Drum was completed between 4 and 7 p.m. on June 3.

To be eligible to complete the survey, participants were required to be at least 18 years of age, and a resident of Jefferson, Lewis or St. Lawrence County. No participant rewards, neither pre-incentives nor post-incentives, were used in the study.

When north country adults self-assessed their physical and dental health in 2021, the reported ratings seem to have stepped toward typical pre-pandemic ratings, but residents’ ratings of their mental health have continued the negative trend that started with the pandemic in 2020.

Alcohol use in the north country has slightly increased since last year with 81% indicating that they drink alcohol, and 58% more specifically indicating that they drink alcohol at least once or twice a month or more. Meanwhile, use of conventional cigarettes, smokeless tobacco or e-cigarettes has remained more constant at 17%, 5% and 9%, respectively.

Marijuana use is about as common as tobacco use among north country adults, with 18% saying they use at least rarely, and 4% using daily. Some, about 6%, reported that legalization will prompt them to start using marijuana if they are not already using.

At the time of this data collection, approximately two-thirds of participants stated that they were fully vaccinated. Among the unvaccinated, when asked what would have the greatest impact on encouraging them to get vaccinated, the most common response was “Nothing” at 35%, closely followed by “Convince me it is safe” at 31%.

The majority of north country residents seem to plan on continuing to practice recommended healthy behaviors to reduce transmission of COVID-19, including frequent hand washing for 20 seconds or more, wearing a mask in public, social distancing, limiting in-store shopping and limiting social gatherings.

Attitudes among parents regarding COVID-19 vaccination of their school-aged children were widely varied and tend to parallel the parents’ vaccination choice.

According to FDRHPO, in general, health care use within the past year in the north country, including doctor visits, emergency room visits and hospital admissions, has returned to pre-pandemic levels after realizing significant decreases in 2020.

To view results for all survey questions and more detailed findings, visit wdt.me/FDhealth21.