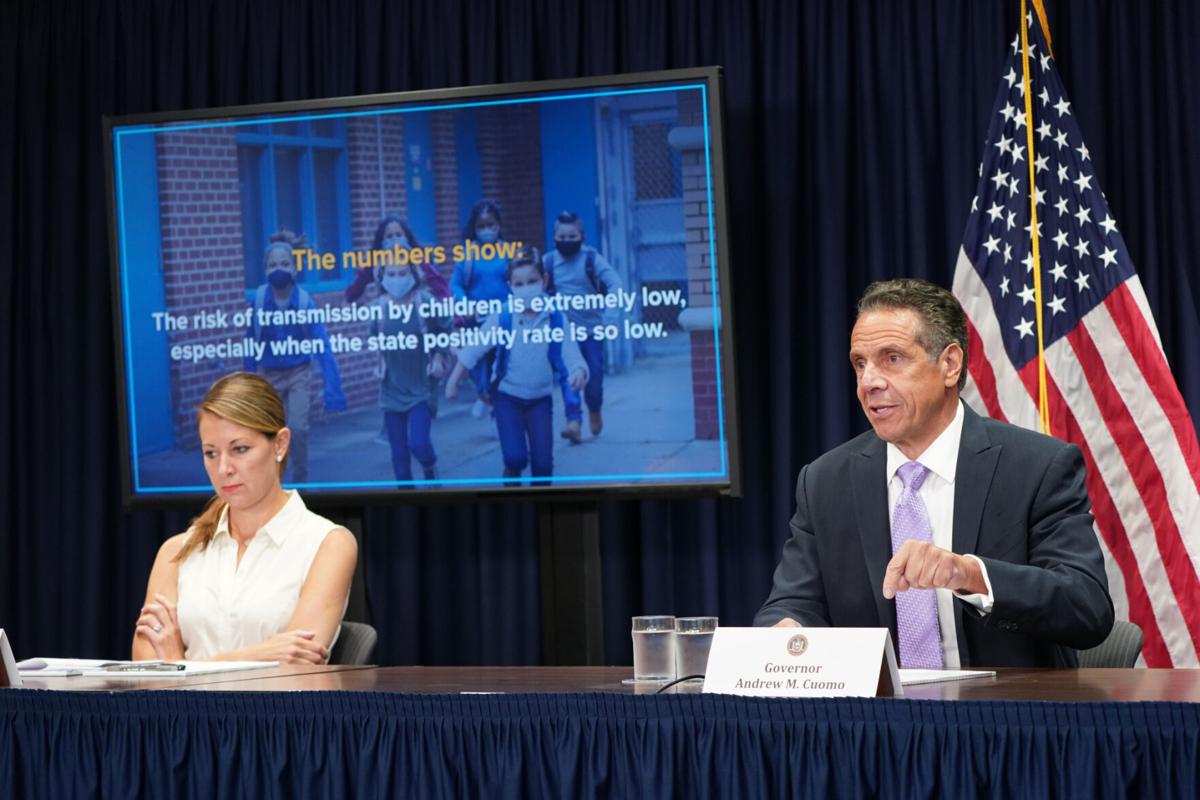 Gov. Andrew Cuomo, right, and Secretary to the Governor Melissa DeRosa at a COVID-19 briefing at the governor’s office in Manhattan on Monday. Courtesy of Gov. Andrew Cuomo’s office 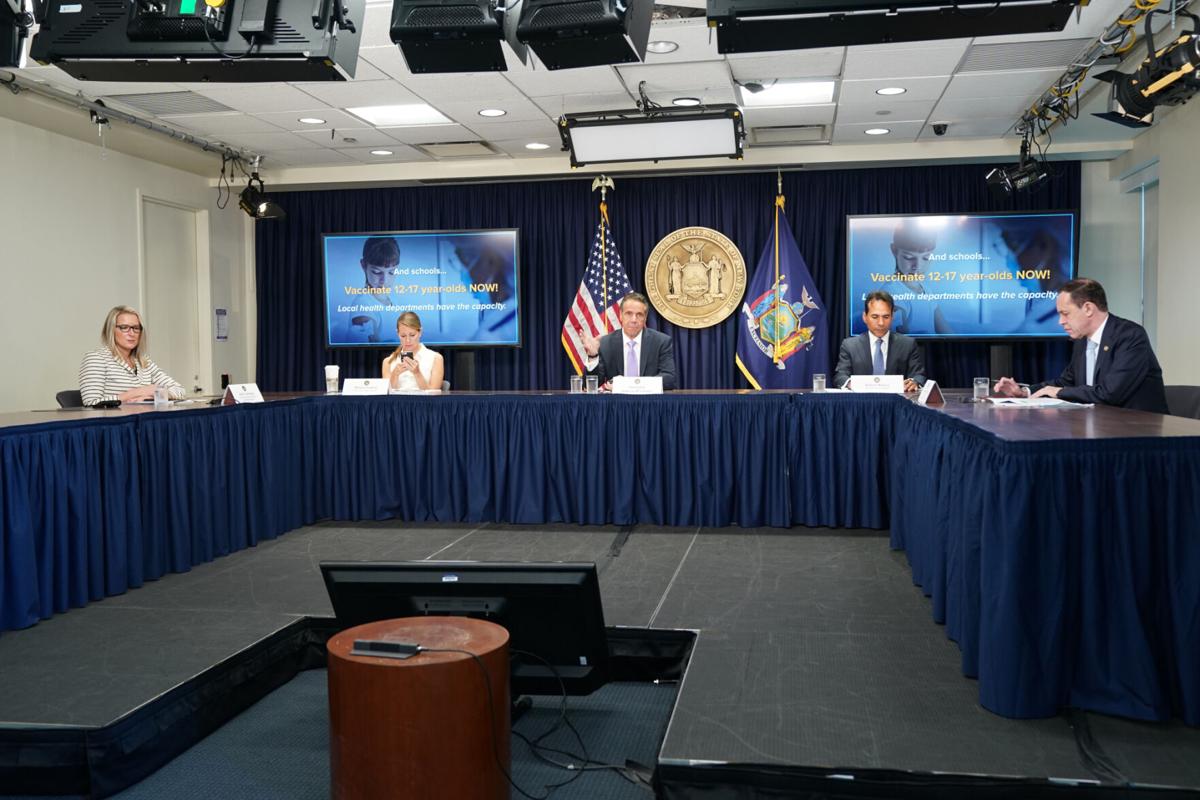 Gov. Andrew Cuomo, right, and Secretary to the Governor Melissa DeRosa at a COVID-19 briefing at the governor’s office in Manhattan on Monday. Courtesy of Gov. Andrew Cuomo’s office

Kindergarten through 12th-grade students in the state’s 700-plus public school districts no longer have to wear masks while outdoors, Gov. Andrew Cuomo said, which streamlines mask-wearing rules for New York schools and summer camps.

“The CDC received my letter,” Zucker said Monday during a coronavirus briefing in Manhattan. “We spoke to them again this morning and we will get rid of the masks outdoors for the kids in school. They are looking at what they want to do for the federal level.”

School superintendents, teachers, parents, students and others have expressed immense confusion about the changing rules after Zucker sent a letter Friday to Dr. Rochelle Walensky, director of the federal Centers for Disease Control and Prevention, informing the agency the state planned to change its rules with new guidelines going into effect Monday, June 7.

Vaccinated people are not required to wear masks at schools, according to the letter, and masks are strongly encouraged, but optional, for those who are unvaccinated.

Cuomo said his announcement Monday made the guidelines official. The governor incorrectly recalled that on Friday, he said officials would tell the schools what the guidance was Monday. Last week, the governor alluded to speaking with CDC officials about reversing the mask rule for students, but did not publicly set a date to reverse guidelines.

On Monday, prior to the governor’s announcement, Massena Central School Superintendent Patrick Brady said there had not been any official legal change in the mask mandate from the state Education Department, state Department of Health or Cuomo.

“The June 4th letter by Health Commissioner Zucker reported by the media on Friday was written to the CDC to determine if the CDC has any objection to relaxing its mask mandate. However, unless and until written guidance or an Executive Order is issued by the State, all students, staff and visitors must wear masks while on school property,” Mr. Brady said in a statement.

“We recognize that the temperature is going to rise this week and we shall adjust the physical education curriculum and recess for students as necessary,” he added. “If we receive direction from the State that changes the mask wearing requirements at school, we will promptly communicate the change to our staff, students and parents.”

“Announcing on a Friday afternoon that masks will now be optional for both vaccinated and unvaccinated people in schools starting Monday — with only three weeks remaining in the school year — is whiplash-inducing news,” he said. “Short of any additional guidance from the state or the CDC before Monday, we implore school districts to closely evaluate local conditions and connect with their educators and parents to decide the best course of action for protecting their school community.”

Republican legislators have railed against the mask mandate for public school students for months. Their outcry boiled over in a joint press conference in the state Capitol on Monday with Republicans in the Senate and Assembly.

Sen. Daniel Stec, R-Queensbury, said his office has received many calls from confused school administrators, teachers and parents over the changing mask mandate for students.

“Clearly, it’s at best the left hand doesn’t know what the right hand is doing,” Stec said Monday. “(The governor) will go to these press conferences and make an announcement that clearly his own staff wasn’t prepared for him to make. That’s a heck of a way to run a state of 19 million people. To whipsaw thousands of teachers and students and over the weekend go back and forth? Something as simple as whether or not a kid in school needs to wear their mask anymore with the numbers where they are, and the administration can’t figure that out.

“They stirred everybody up and they added all this confusion,” he added. “That’s because this is what happens when you have one person calling the shots.”

Sen. Joseph Griffo, R-Rome, said in a statement Monday that it was “the latest example of the erratic nature in which the Governor and his administration have continued to operate as this public health crisis has progressed.”

He said he would be joining his Senate and Assembly colleagues “to put forth a concurrent resolution to terminate the state’s disaster emergency to finally revoke Gov. Cuomo’s unilateral decision-making authority.”

“We have repeatedly seen inconsistent mandates, directives and orders from this administration during the coronavirus pandemic,” Griffo said. “With the end of the school year near, making changes without consistency and input from stakeholders in education is unacceptable. It is another poor reflection on the administration and the Department of Health, led by a discombobulated Dr. Zucker, who have made last minute modifications that have only caused confusion, contributed to anxiety and created additional stress and hardships for New Yorkers.”

Most schools will conclude classes within the next two weeks until September, or after Labor Day.

CDC officials did not recommend rescinding all mask-wearing for kindergarten through 12th-grade students indoors, Cuomo said.

“CDC thinks that is not advisable — that was posed in the question,” the governor said. “They were comfortable with the outside mask requirement. They make a good case on the potential hazards on the inside.”

“If you were to now go maskless, they think you’d have to reconsider all of that,” she said. “They think the safest course is to keep them on indoors for now.”