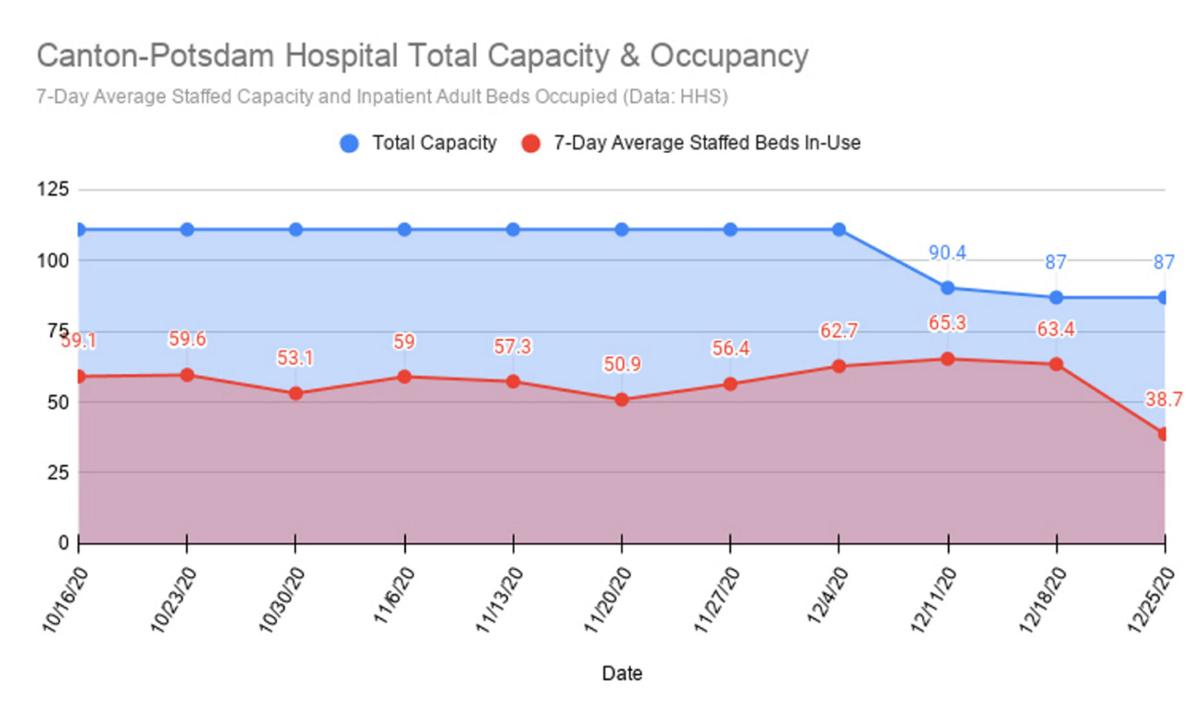 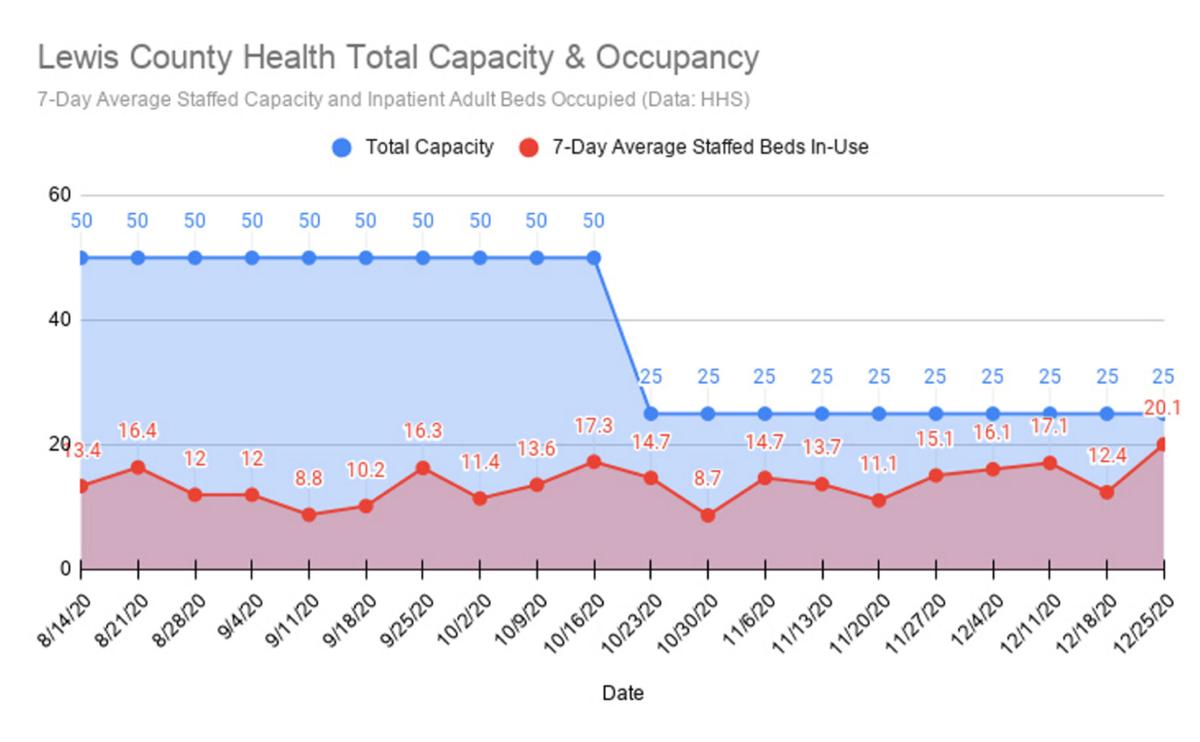 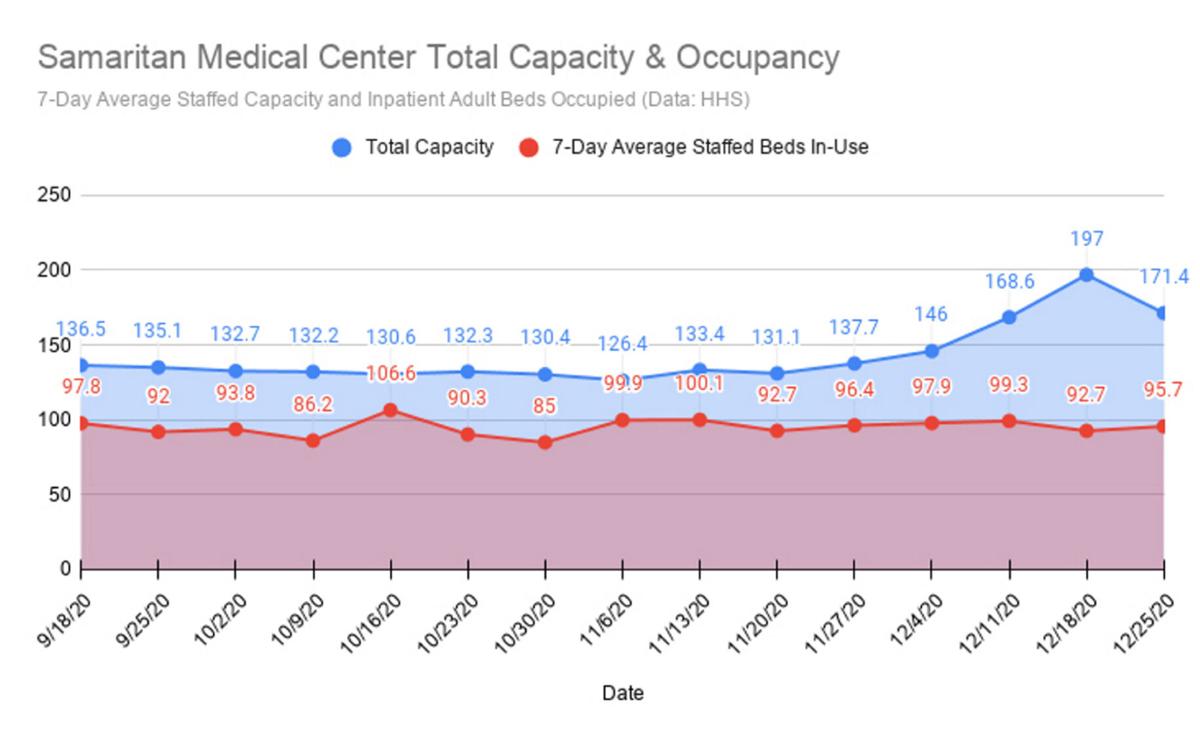 WATERTOWN — North country hospitals have mostly continued to keep occupancy rates steady, despite continued concerns that recent spikes in COVID-19 cases could result in a later surge in hospitalizations.

According to data from the U.S. Department of Health and Human Services, the seven-day average inpatient occupancy rate at the 13 hospitals in the north country region continued to hover at about 55.2% for the week beginning Dec. 25. This encompasses 13 hospitals in Jefferson, Lewis, St. Lawrence, Franklin, Clinton, Hamilton and Essex counties. Nine of those are located in Jefferson, Lewis and St. Lawrence counties, posting a slightly lower average occupancy of 49.6% over the same period.

COVID-19 cases have continued to surge in the tri-county region, with Jefferson, Lewis and St. Lawrence counties all reaching their highest seven-day average of new cases per day per 100,000 people ever recorded on Jan. 1. Rises in cases usually translate to a rise in hospitalizations and deaths in the following weeks.

Nominally, the number of overall occupied in-patient beds fell for the fourth week in a row, while hospitals appeared to scale down their actively staffed capacity accordingly. For the week beginning Dec. 25, there were an average 425.1 adult inpatient beds occupied out of 770.8 staffed beds available. This is a reduction from 441.4 average beds, or 54.9%, occupied out of 804.7 available.

Hospitals in the tri-county region showed mixed results from the week prior, with some increasing and others decreasing in capacity rates.

Lewis County General Hospital in Lowville reported an average of 20.1 beds occupied out of 25 total available last week, or 80.4%. This is an increase of 7.4 from the week prior. While the hospital has been hovering in the upper 60% range on occupancy for the last few weeks, Lewis County Health System Chief Executive Officer Gerald R. Cayer noted that surge plans are in place if more beds are needed.

“We have had a surge and flex plan in place since before Thanksgiving,” Mr. Cayer wrote in a prepared statement. “We have staffing plans and bed capacity to support 115%, 125%, and 150% of licensed capacity. We monitor the census several times throughout the day. Each day it is the first thing we check when coming in and the last thing we review when leaving.”

Samaritan Medical Center in Watertown showed a decreased average capacity of 26.6 beds — down to 171.4 from its recorded all-time high of 197.0 the week prior — while the average occupancy rate increased from 47.1% to 55.8%.

Canton-Potsdam Hospital, one of three hospitals in the St. Lawrence Health System, saw a relatively large decrease in average inpatient beds in use last week, dropping to 38.7 from 63.4 the week prior, while capacity remained the same at 87 beds available.

Hospitalizations continue to tick up statewide, with 8,251 total virus patients in state hospitals Monday, up 288 patients overnight. State Coronavirus Task Force members communicate with hospital administrators each day to ensure no facility becomes overwhelmed with patients. Hospitalizations continue to increase statewide with virus infections, but as of Monday, all regions have more than 30% available hospital bed capacity.

When a hospital is within three weeks of hitting 90% occupied, an area will shut down, or all nonessential businesses will be mandated closed.

Hospital capacity hovered at 31% in the Finger Lakes and at more than 32% in the surging Mohawk Valley and Capital Region on Monday. North country hospitals have 58.5% of staffed acute beds available — the most in the state.

The Finger Lakes region persists in having the highest number of New Yorkers hospitalized with the disease at 930 people, or a rising 0.08% of the region’s population.

“This is not a fluke, this has been going on for weeks,” Gov. Andrew M. Cuomo said during a COVID-19 briefing. “Finger Lakes, they have to take it seriously.”

COVID-related hospitalizations also continue to surge in the Capital Region with 468 virus patients at 0.04% of the population. Western New York also has 0.04% of its population in the hospital with virus complications at 531 people. North country virus hospitalizations have remained about flat at 0.02%, or 82 patients.

Virus infections have spiked over the nearly six-week holiday season from Thanksgiving through New Year’s Day.

About 900 New Yorkers enter state hospitals with COVID complications per day over a one-week average since Dec. 27 — up about 100 people in the last week from about 700 daily virus admissions since Thanksgiving, or Nov. 26.

Disburse Covid vaccinations!!!!! What are they waiting for??? Announce a vaccination clinic at the hospitals...school gyms...firehalls...drug stores....etc... based on age...pick a day of the week... lets go!!!! Good grief!!!