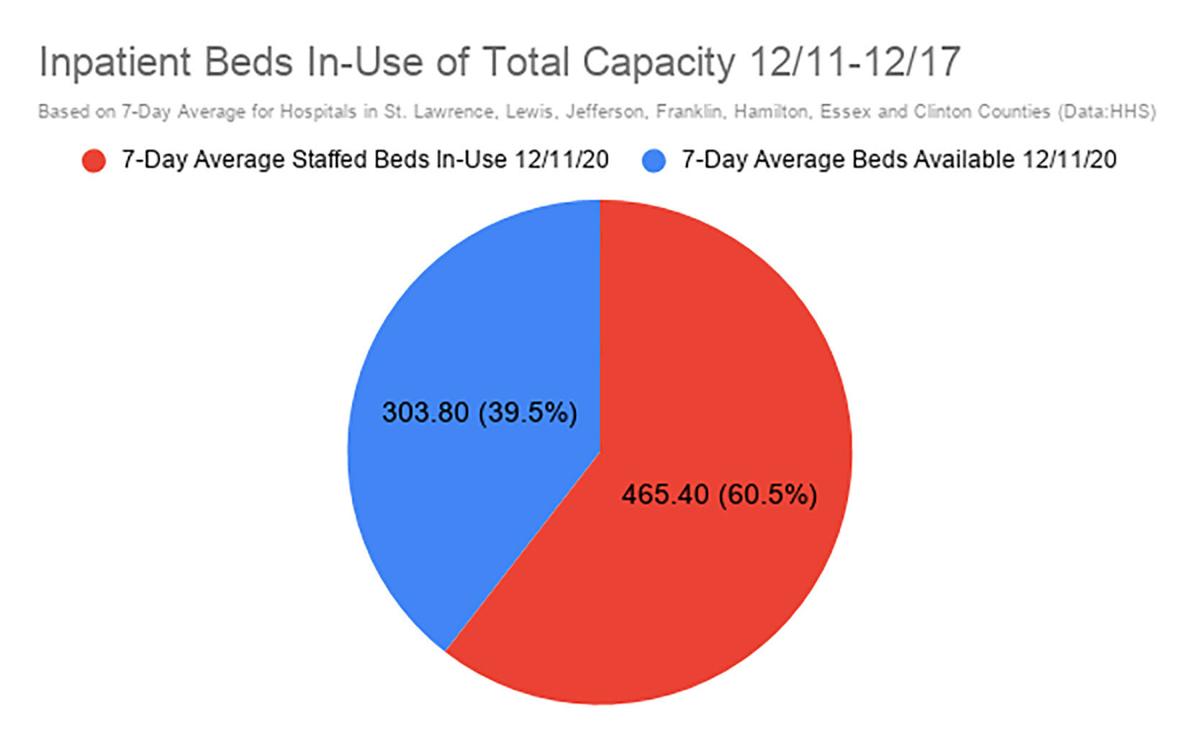 WATERTOWN — North country hospitals remained at a similar rate of occupancy last week compared to the week prior, according to federal data.

As of the week ending Dec. 17, the 13 hospitals in the north country region including Jefferson, St. Lawrence, Lewis, Franklin, Clinton, Hamilton and Essex counties, had a combined average of 465.4 beds occupied of 769.2 total staffed inpatient beds available. This is an average of about 60.5%, as compared to 59.1% the week prior.

As a region, the hospitals reported 815 total average staffed inpatient beds available the week prior, a decrease of 45.8.

Hospital officials at several facilities said the decreases can be attributed to changes in staffing, and the reservation of some beds adjusting to patient counts and recommendations from the state.

Claxton-Hepburn Medical Center in Ogdensburg reported having an average 72.6 staffed inpatient beds available as compared to 91 the week prior.

“The change in numbers comes from the dynamic situation regarding staffed bed capacity,” Claxton-Hepburn Interim Executive Director of Marketing and External Relations Amanda Hitterman wrote in a statement. “Staffed bed capacity is adjusted according to state objectives to meet the needs of our current census, as well as maintain surge capacity when called for. This number will continue to fluctuate as things evolve.”

Neighboring Canton-Potsdam Hospital also saw a decrease in average inpatient capacity of 19.6, as compared to the previous week.

“We’re being requested to report out on staff and surge capacity, as opposed to a static licensed bed count. In other words, our response to these surveys are activity-based and will change from time to time,” St. Lawrence Health System Chief Administrative Office Jeremy Slaga said in a statement Wednesday.

Champlain Valley Physicians hospital in Plattsburgh also saw a decrease of seven staffed inpatient beds over the week prior. The facility’s occupancy rate has declined for two weeks, but it’s still grappling with a significant occupancy rate of 90.98%.

The state Department of Health ordered all hospitals to notify officials if their occupancy was projected to exceed 85% within three weeks. Gov. Andrew M. Cuomo noted as recently as Wednesday that no hospital has hit this threshold, meaning the state is likely calculating capacity slightly different from this analysis.

Under guidance from the state, any region where hospitals are projected to reach a combined occupancy of more than 85% within three weeks will immediately enter red zone restrictions. That would effectively close all in-person dining, schools and severely limit gatherings.

“We have a surge plan in place ... no reason to worry, no issues like that,” Carthage Area Hospital Director of Marketing Taylour L. Scanlin said.

Figures on average intensive care unit capacity and occupancy from the U.S. Department of Health and Human Services data are also slightly finicky, but generally suggest steady occupancy compared to the week prior.

There are seven ICUs in the north country region.

As of the week ending Dec. 17, they had a combined staffed capacity of 61.4 beds, 39.5 of which are in St. Lawrence, Lewis and Jefferson counties.

The HHS data anonymizes any data points below the number four. Since many of the ICUs have relatively small capacity, their data are anonymized, making it impossible to ascertain the exact average rate of ICU beds occupied, though that figure must be between 46.5% and 65.2%.