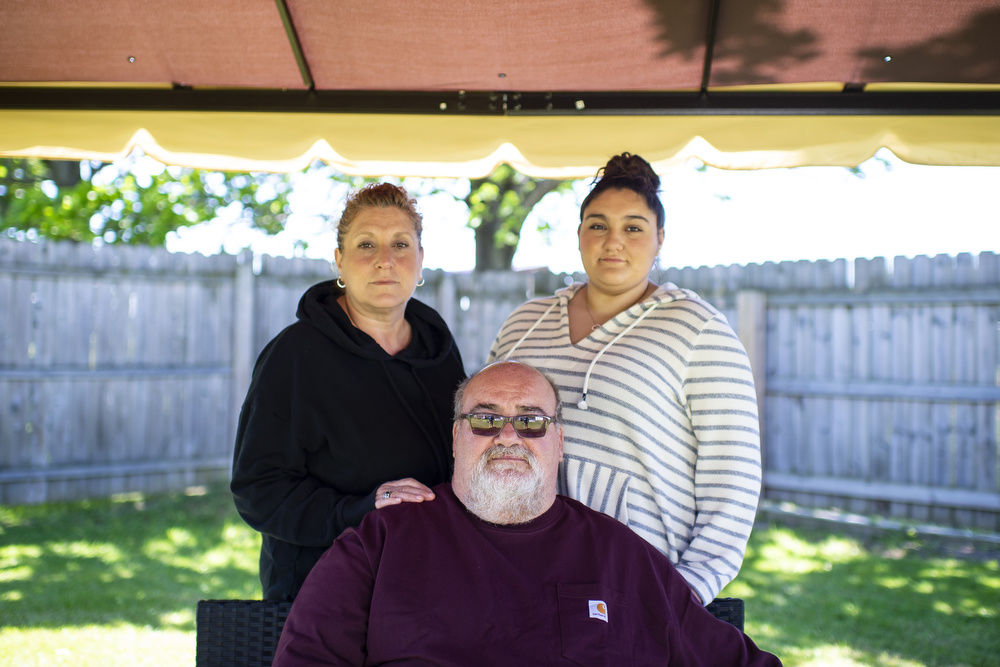 Dean DeVito, center, his wife Nicole, left, and their 16-year-old daughter Sophia are shown in the backyard of their home in Sackets Harbor on Friday. Two months ago, the three family members contracted COVID-19. While all three have tested negative for coronavirus, they are still experiencing residual effects, including shortness of breath, headaches and anxiety. Emil Lippe/Watertown Daily Times 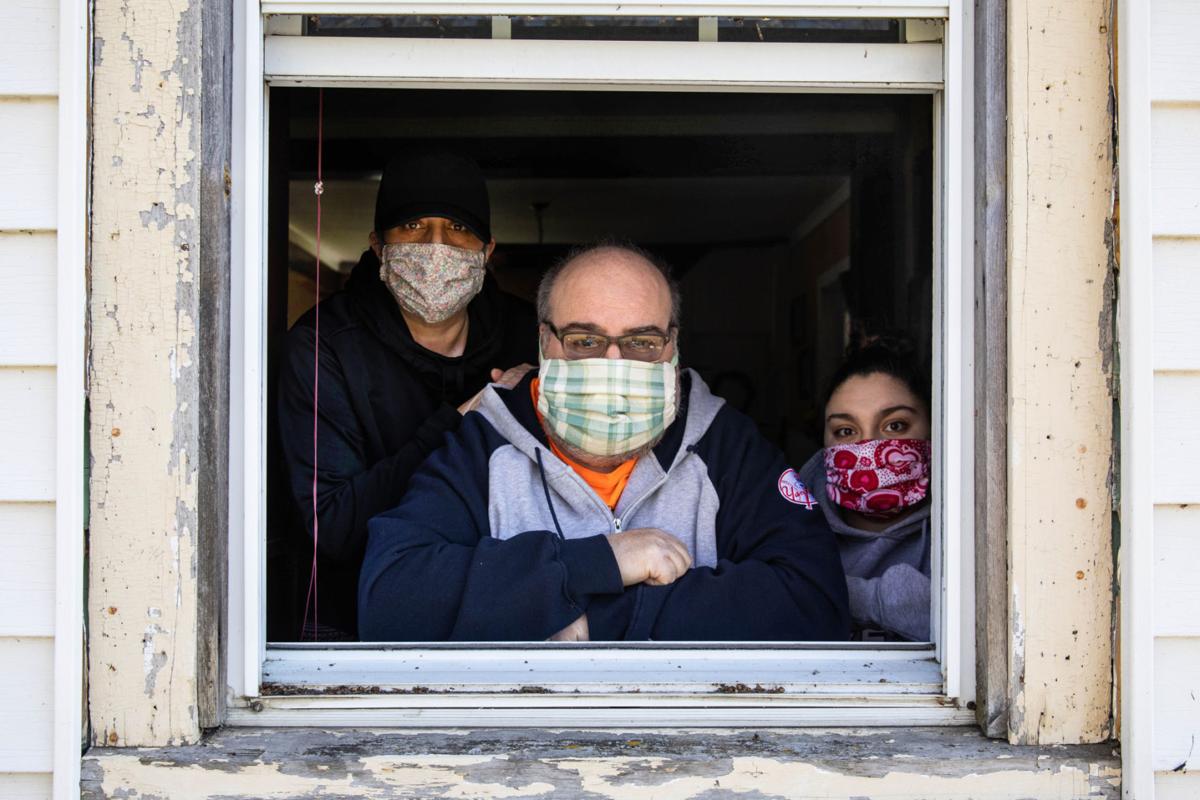 Dean DeVito, center, his wife Nicole, left, and their 16-year-old daughter Sophia are shown in the backyard of their home in Sackets Harbor on Friday. Two months ago, the three family members contracted COVID-19. While all three have tested negative for coronavirus, they are still experiencing residual effects, including shortness of breath, headaches and anxiety. Emil Lippe/Watertown Daily Times

SACKETS HARBOR — Dean DeVito was diagnosed with COVID-19 in early April, with his wife Nicole and daughter Sophia diagnosed not long after. Now nearing the middle of June, he and his family, like many who have battled COVID, are still dealing with the effects of the disease caused by the novel coronavirus.

In Mr. DeVito’s case, while he has tested negative, he has still been unable to meet with his doctor to be officially ‘cleared’ of having COVID, which basically means he would be deemed no longer contagious. Mrs. DeVito and Sophia, however, have already been cleared.

While they all live together and came down with the virus around the same time, the DeVitos are experiencing an array of residual effects, only sharing a few, like ringing in the ears, exhaustion, and feeling like the room is spinning for about 10 minutes at a time.

“It’s very frustrating because we feel good one day and then we’re not good for two days,” Mrs. DeVito said. “You think you’re getting better and then you’re like, ‘Ugh, I have this spinning, or my heart is racing.’ Dean and I, we don’t need extra breath, but we feel like we’re gasping for it even though we don’t need to. It’s just a bizarre thing.”

Mr. DeVito, 56, has been dealing with shortness of breath, dizziness, and tremors, as well as having to deal with health issues he’s encountered in the past, which his wife thinks have been brought to the forefront again due to the virus. With his breathing, he feels like he swam under water for a long time, like he swallowed too much water.

Sophia, who turned 16 after having contracted the virus, has been mainly dealing with neurological issues, like pressure in her head known as a “COVID headache,” which an estimated 35 percent of patients experience. She underwent a spinal tap, which came back clear, and also deals with internal tremors and what is known as buzzing and fizzing, where electrical pulses are shot through the body, resulting in a fizzy feeling that turns painful.

As for Mrs. DeVito, 54, she has been experiencing heart palpitations and had an episode of tachycardia due to her illness. Previously, she had dealt with shaking, but that has given way to anxiety now.

“I don’t think it’s regular anxiety,” she said. “I think this is the anxiety brought on by the virus itself, I think it actually physically gives you anxiety.”

Reeling from the residual effects and wondering if she was the only one experiencing some of these things, Mrs. DeVito found a Facebook group called “COVID-19 Support Group” where she was able to read stories from others that echoed her own, which gave her a sense of validation she wasn’t getting from her doctors, who ordered tests that all came back clear though she knew what she was experiencing was real.

Now that the DeVitos are negative for the virus, the nurse they had coming to check in on them every day scaled her visits back to once a week, which Mrs. DeVito says has still been a tremendous help. Sophia gets blood work done every two weeks, Mrs. DeVito sees her doctor once every two weeks, and Mr. DeVito has been seeing his doctor once a week and gone through a lot of blood work.

“I still keep in touch with the doctors and let them know what I’m having because they don’t know much about COVID and I want it documented,” Mrs. DeVito said. “We just hope that every day it gets better, that’s all we can do.”

Mrs. DeVito said she wishes there were a phone number she could call, a central location, and be able to tell whoever is on the other end of the line what she is experiencing and have them tell her where she can go or what she can do to help the problem.

Along with many physical and mental effects, like anxiety and depression, those who deal with the disease must also contend with financial strain as well.

“It’s not like one of us only had COVID, it was two of us,” Mrs. DeVito said. “When you’re out for COVID, you get paid for those two weeks, you’re covered because supposedly you’re supposed to be done in 14 days, but you’re not. So then you have to go out on disability, short term and long term disability, which is like a third of your pay, you only get 60 percent of your income, and then you have to wait for this stuff to happen and you have to fill out all the paperwork.”

Before she went into the hospital with the virus, Mrs. DeVito applied for unemployment and would call 20 times a day, unable to even lift her head off the pillow at the time. In need of help, she called Sen. Patricia Ritchie’s office and was eventually able to get everything squared away.

Now that the DeVitos are no longer quarantined to just their home, they are able to go out for short walks, drive around town, and occasionally run into stores to grab groceries, though they usually use curbside pickup to minimize contact with others, afraid of possibly contracting the virus again.

“No one is wearing a mask, no one’s distancing because up here only 70 something people got it, they don’t believe it was even an issue,” Mr. DeVito said. “I’m going to be honest; it burns my ass because it was an issue — people don’t think it was bad, it was like the flu. Let me tell you, it’s nothing like the flu. And the mental aspect of it now is you’re always looking over your shoulder and looking to see if someone’s going to wear a mask or not.”

Sharing the frustration of her father, Sophia said those who are no longer wearing masks or socially distancing are undoing all the work the community has done to flatten the curve and keep cases in the area down.

Back to working at Sackets Harbor Central School twice a week, Mrs. DeVito said it takes a lot out of her and she is exhausted the next day. Sophia has started schoolwork again, but there are days that she just can’t do it because her head hurts too much or she’s tired. Mr. DeVito has been unable to return to work at the Price Chopper in Alexandria Bay for the time being.

“I call us COVID-19 warriors — Sophia laughs at me, but I think we’re tough and we’re warriors of it,” Mrs. DeVito said. “And I wish I could say we beat it. We beat this round and I hope we never get it again, that we never get a chance to beat the beast again.”

To the DeVito family, thank you for sharing your personal experience with the public. By doing so, you have provided much needed and valuable insight as to the danger(s) and bizarre nature of this little understood virus.

For every person that vehemently declared that Cocid-19 was no worse than the flu… you were very wrong!!

For every person that refuses to practice common sense preventive measures… shame on you!!