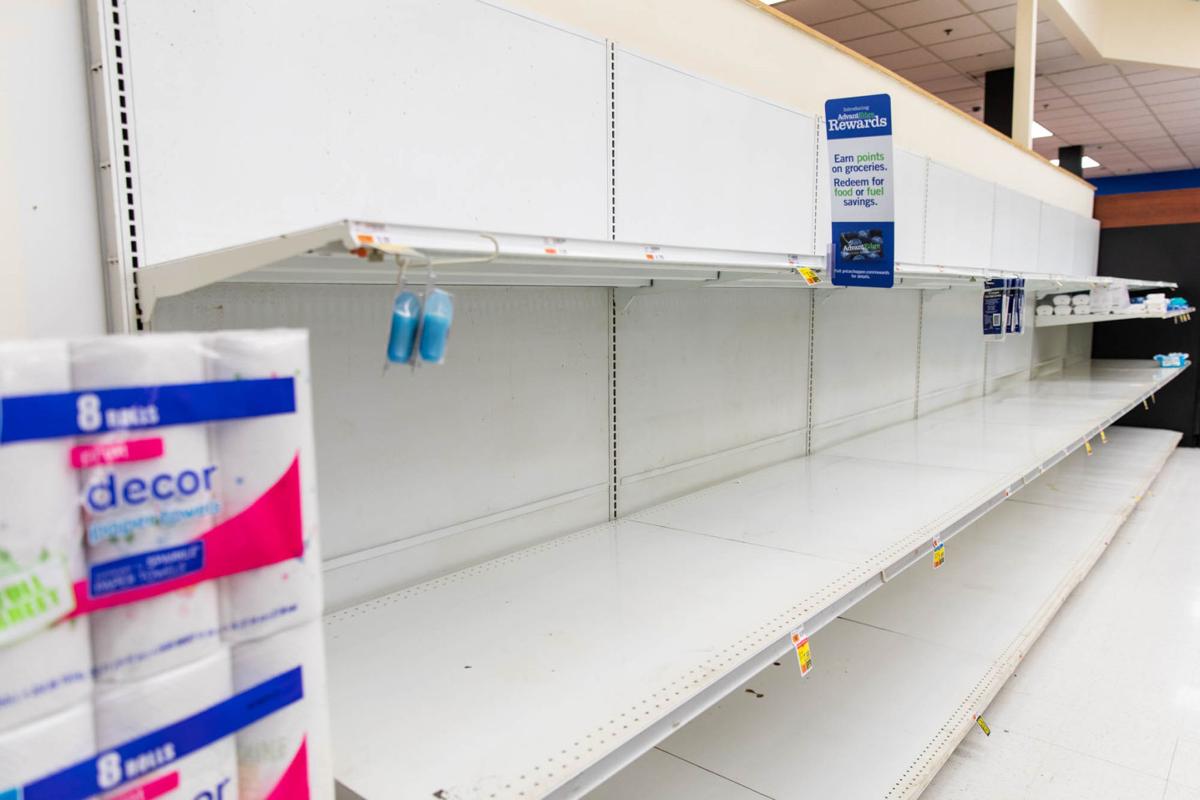 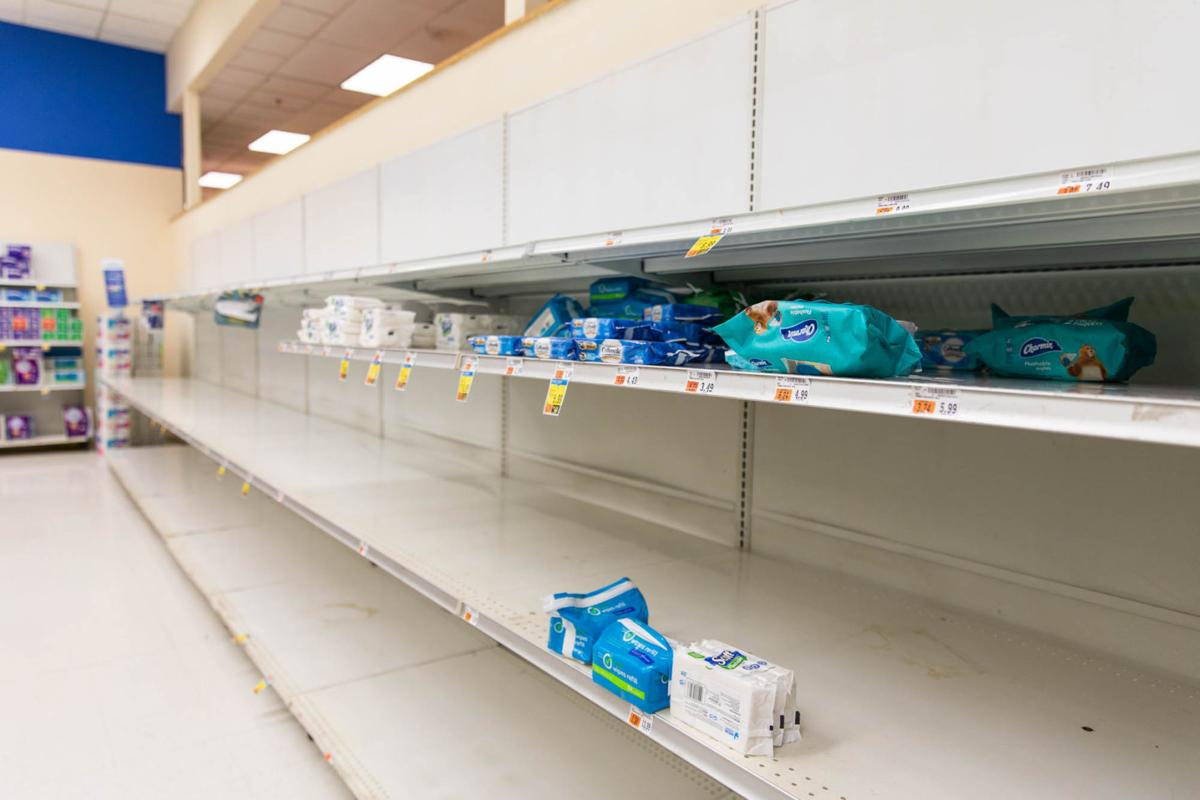 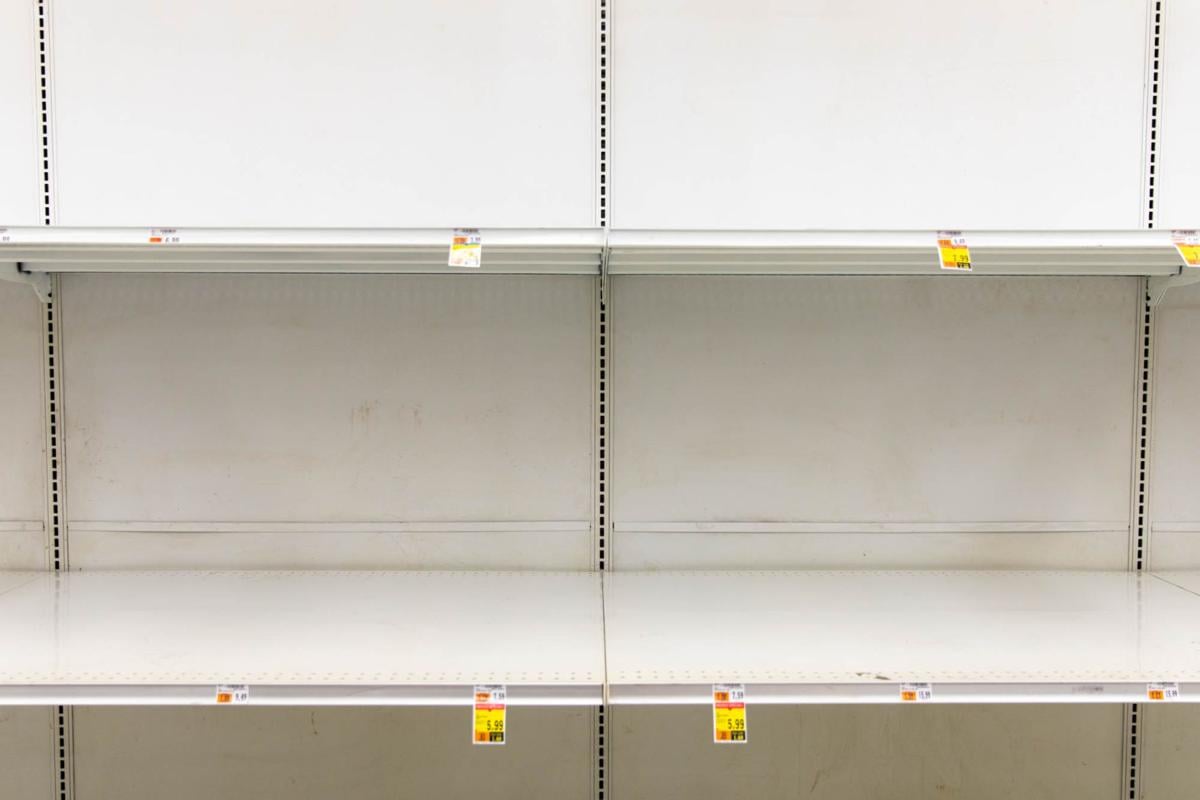 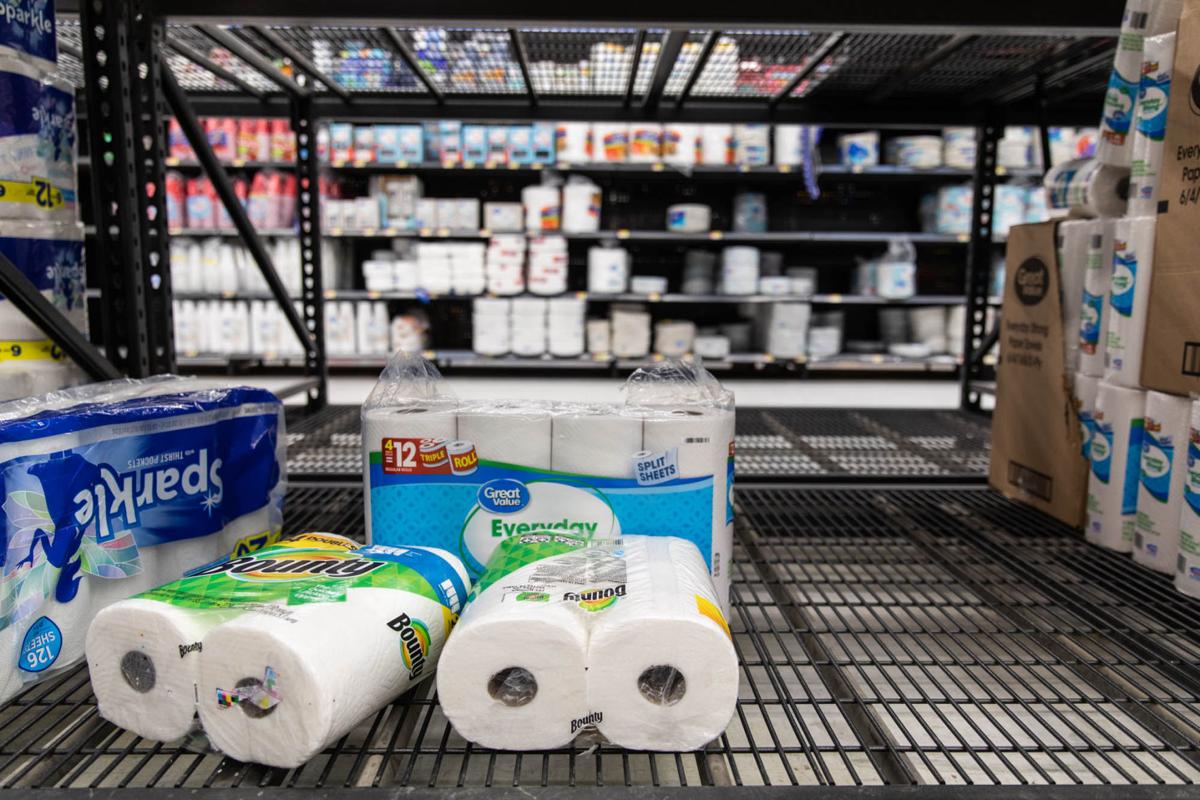 The final rolls of toilet paper at Walmart in Watertown lay on the bottom rack Friday. Sydney Schaefer/Watertown Daily Times

The final rolls of toilet paper at Walmart in Watertown lay on the bottom rack Friday. Sydney Schaefer/Watertown Daily Times

WATERTOWN — Many local shoppers, unbothered but wary of the coronavirus, expressed frustration this week with recent panic and bulk shopping at area stores — and were definitely curious about where all the toilet paper went.

Sharon Graves was browsing the dairy section at Walmart on Friday morning. She looked confused at the nearby teepee shelf, which was all but empty.

All of the nearly 20 other shoppers the Times spoke with shared a similar sentiment. Some were socially isolating themselves partially — like not going to the mall — others were going to the pharmacy, store and that was it. Some expressed how a widespread scarcity of toiletries wouldn’t have happened if people were mildly prepared.

Tara Cole, who’s a sociologist, counselor and social worker in Watertown, said much of the worry and anxiety associated with the novel coronavirus comes from a sense of feeling a lack of control about things that are important to daily life and functioning.

“Panic buying,” she said, “represents an effort to gain control in the face of stress, anxiety, and uncertainty.”

A self-employed logger who, too, was shopping at Walmart on Friday morning, said he had already been to Sam’s Club for toilet paper, though the shelves were bare.

“What’s the whole thing with the toilet paper?” he said. “This place is bare, too.”

Bonnie Billhardt, Adams, isn’t letting it stop her from shopping as well.

James Blodgett, who also was at Walmart, has a diet that doesn’t allow him to stockpile food for a long period of isolation. He’s had a heart attack and requires produce and fresh poultry to carry on. His daughter, though, has been stockpiling materials in light of the coronavirus. She lives in Alaska.

“I understand,” he said at Walmart. “But for me, I’m not going to change my habits any differently than what I did last year around this time.”

He said he’ll be more vigilant as the coronavirus continues to spread, like avoid a concert or large crowds. But he’ll also be business as usual, like how he washes his hands.

Pat Meaney, who lives in Cape Vincent and was at Price Chopper on Friday, feels the same: “I’m not doing anything differently,” he said.

Rep. Elise M. Stefanik, R-Schuylerville, told the Times she’s very pleased President Donald J. Trump declared a national emergency on Friday. The move will free-up billions of dollars to combat the virus and reduce regulations facing hospitals, health centers and clinics, among other things. The FDA this morning also announced that New York can start using private labs to test for the virus.

Ms. Stefanik said she knows there haven’t been many confirmed cases of coronavirus in her district, but she hopes her constituents will take it seriously and to continue hand washing and avoiding large groups.

Sarah Kingery is worried about people hoarding supplies when there are elderly parents and immune-compromised children that need them now. On a recent errand to find hand sanitizer, Mrs. Kingery and her mother went to Sam’s Club, Lowe’s, Home Depot, Hannaford’s, Big Lots, Target and Walgreens. None of them were carrying hand sanitizer.

It kind of became a game after the first two had none,” said Ms. Kingery, adding that it was also unavailable from Amazon.

But above all, it’s the toilet paper that perplexes her the most.

Her 2-year-old son will need baby wipes soon, which she said are also in short supply. But she’s been able to find those online. The more pressing concern is canned goods.

“I honestly think people really need to focus on what’s going to be important,” she said, “which is food.”

One of my FB friends said toilet paper shortages actually have a simple explanation: TP is a low cost bulky item; it takes up a lot of space on store shelves. The same volume for one package of toilet paper can stock like a dozen cans of spaghettios, for example.

So even a small amount of panic buying looks like a huge empty space before very long at all. Due to the large physical size together with relatively low profit margin the stores will often keep fewer units in stock too so it doesn't take long to sell out.

Bottom line is it probably looks worse than it really is.

as a public service announcement, you can always buy toilet paper online, for example: https://www.amazon.com/Novelty-Place-Donald-Different-Pictures/dp/B074T9QHZW.

i know that right-wing types don't really do embarrassment these days, but let me assure you that that is such a pathetic comeback that i am embarrassed on your behalf.

"well, the jerk store called. they're running out of you!"

Remember when the right wing wet themselves when one person with ebola made it into the country and they wanted to hang Obama?

That was simply shameful.

The current behavior of the Republican party regarding this Covid-19 concern is evermore shameful.

Remember remember these clowns in November. Stefanik & Republicans passes on a golden opportunity to jettison Trump 6 weeks ago BEFORE he Spent the first 3 weeks of this pandemic felling people to attend rallies, that it would just go away, that people could go to work and get over it with no problem. Elise, you hooked your political wagon to the back of Trump last month, enjoy the ride & the view.

It is my heartfelt hope that we all get through this -- wiser, and unified, ever more respectful of science and education and also of the rule of law.

Anyway, here is some "food for thought" from some promising current research:

A couple of the of the key features of the formation of furin (essential for receptor contact of Covid-19, an therefore necessary to initiate infection), are that

1) the formation of furin is increased with conditions more likely to be found in the elderly (e.g. HTN, CAD, COPD)

2) formation of furin is dependent on availability of positively charged amino acids (biochemistry basically works like this – the availability of reactants drives the reaction). Arginine, Lysine, and Histidine are the relevant amino acids.

Most viruses (not all) but certainly Coronaviruses, require Arginine to replicate. One example of the application of this knowledge involving the Herpesviruses is the use of large dose supplements of Lysine (another positively charged amino acid) which throws the balance toward reactions utilizing Lysine and thus Arginine is perceived by the system to be in short supply. The addition of Lysine to alter the balance has been shown to mitigate the reactivation of the virus.

Another way we might consider the vulnerability aspect could be via an examination of the Arginine and Lysine balance of the diet. Here is a helpful link (sadly, not comprehensive): https://www.traditionaloven.com/tutorials/l-lysine_rich_foods.html

A review of the local cuisine in the most heavily affected areas reveals that there may very well be a predominance of Arginine in the diet of the elderly in those locations.

I didn’t know you were a virologist? Are you a Medical Virologist or a Research Virologist?

A side note, I don’t think I’d use salon.com as a very reputable reference based on their far left ideology and known for it as a liberal blog with sensational clickbait headlines. Hint, not very scientific but one has to consider their followers. Have a good day, DR Holmes...

this kind of outright celebration of ignorance is going to get people killed.

You are absolutely correct.

You have no idea whatsoever of my background, education, or training, fake "Holmes."

There are numerous other references available if you wish to look into the relevant material surrounding this particular realm of research.

Oh, BTW, I am looking forward to your insights regarding this information.

You can use a paper towel. Once you get it wet, a paper towel is surprisingly soft yet resilient, and they usually have texturing that gives them extra pick-up ability.

And, just for you rdsouth, because I do so appreciate your humor: