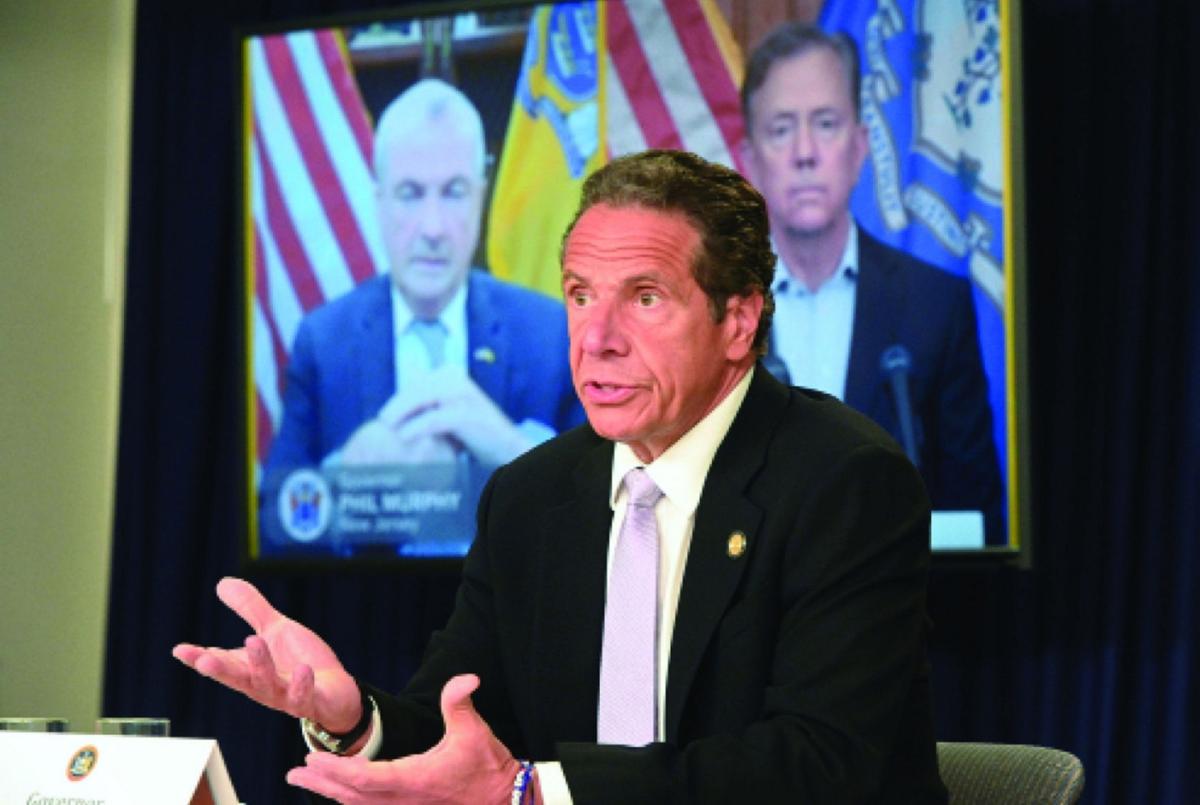 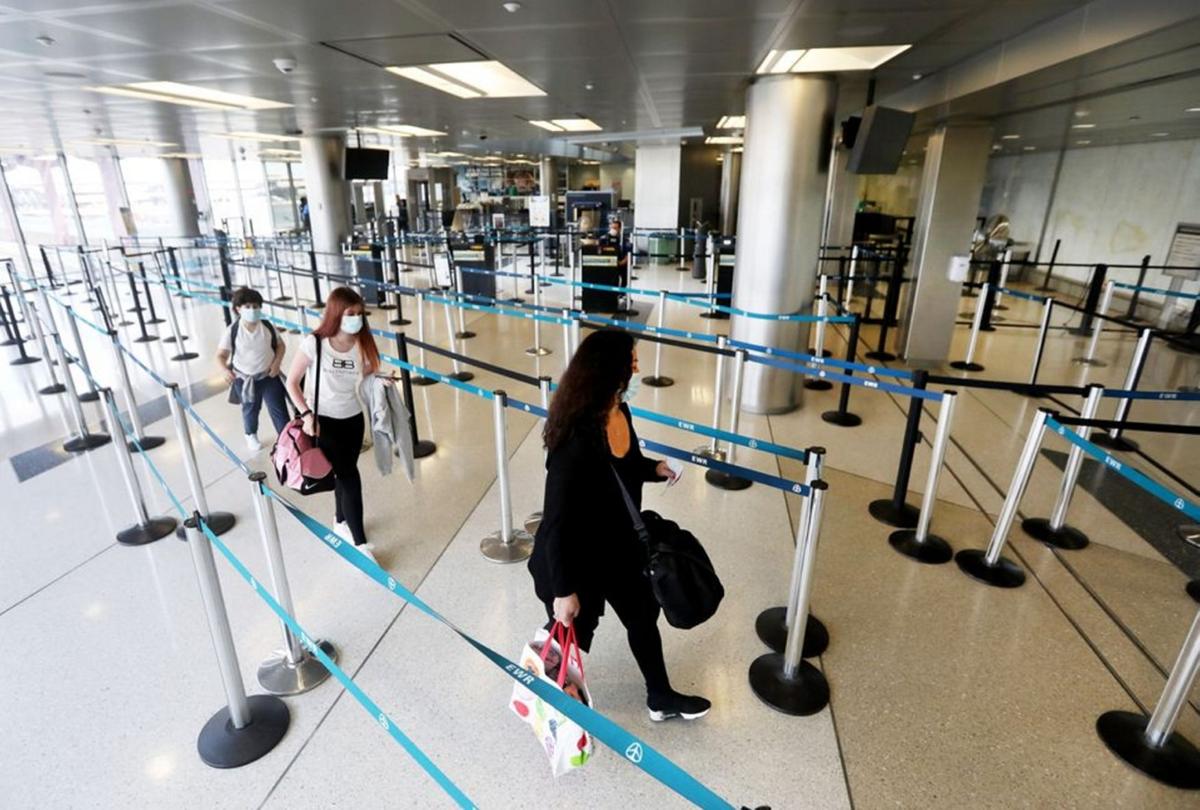 Terminal B at Newark Airport is shown on June 22 in Newark, N.J. Visitors from 17 states must self-quarantine for two weeks when traveling to New York, New Jersey and Connecticut to attempt to curb the spread of the coronavirus COVID-19. Govs. Andrew Cuomo, D-N.Y., Phil Murphy, D-N.J.; and Ned Lamont, D-Conn.; issued a joint incoming travel advisory last week mandating all individuals traveling from states with significant community spread of COVID-19 quarantine for a 14-day period. Ed Murray/NJ Advance Media 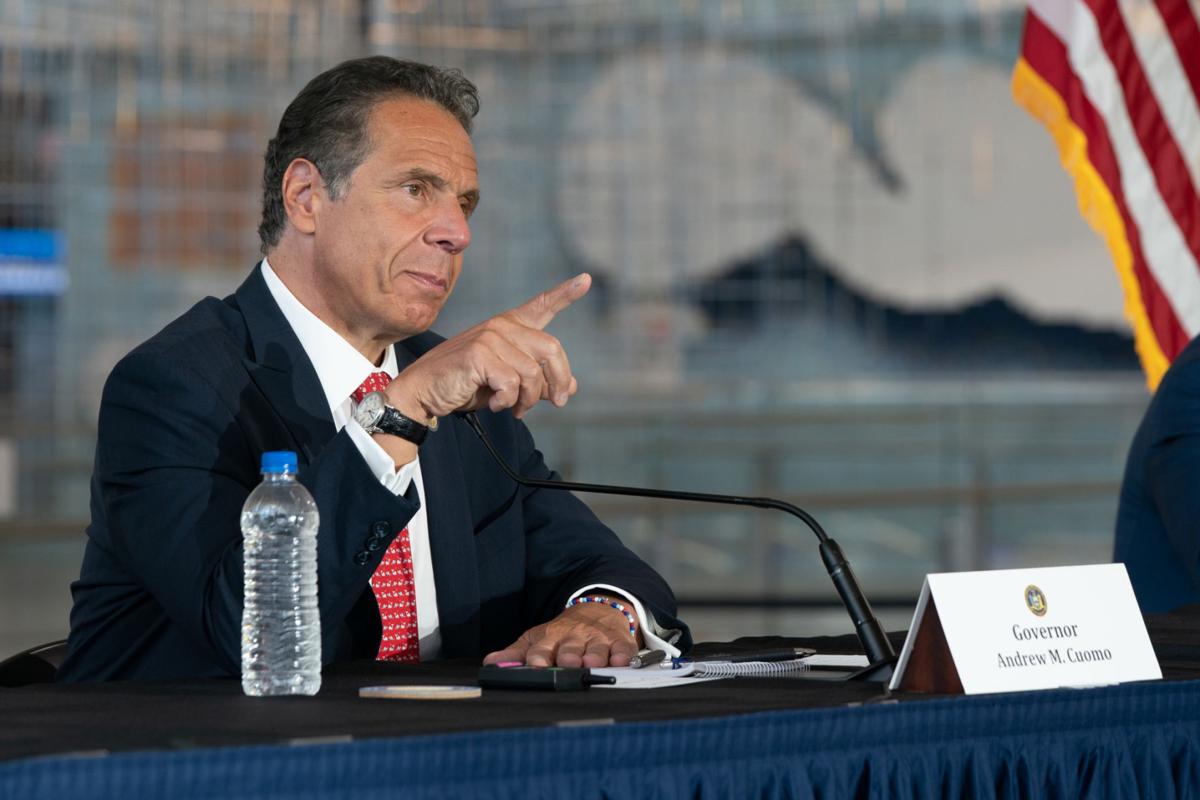 Terminal B at Newark Airport is shown on June 22 in Newark, N.J. Visitors from 17 states must self-quarantine for two weeks when traveling to New York, New Jersey and Connecticut to attempt to curb the spread of the coronavirus COVID-19. Govs. Andrew Cuomo, D-N.Y., Phil Murphy, D-N.J.; and Ned Lamont, D-Conn.; issued a joint incoming travel advisory last week mandating all individuals traveling from states with significant community spread of COVID-19 quarantine for a 14-day period. Ed Murray/NJ Advance Media

As a COVID-19 surge sweeps through 27 states and Puerto Rico, Gov. Cuomo, D-N.Y.; and Govs. Phil Murphy, D-N.J.; and Ned Lamont, D-Conn., imposed a tri-state order at midnight Thursday mandating a two-week self-quarantine for travelers who fly or arrive in New York, New Jersey or Connecticut from states with more than a 10 percent positive coronavirus test rate over a seven-day average.

“If you fly in to New York, we’ll have your name, we’ll know where you’re supposed to be staying...there will be random checks,” Gov. Cuomo said Thursday during an interview on CNN’s New Day. “We’ll have inspectors who are randomly looking at the names on the list and calling to follow up to make sure you’re quarantining. And if you’re not, you’re in violation of the law and you will have a mandatory quarantine, and you’ll be fined.”

People who violate the advisory will be subject to a judicial order and mandatory quarantine where a state official checks a residence or dwelling once per day to ensure a person has remained separated from the public.

The governor’s Press Office did not respond to multiple requests for comment Thursday about which state officials will be performing the inspections, how many inspectors will work in each region or county or the methods they will check a traveler in self-quarantining.

At the beginning of the pandemic in New York in March, the governor said state Department of Health officials physically checked on people under mandatory quarantine at least once per day, but did not check on people asked to self-quarantine.

Violators may be fined $2,000 for the first offense, more repeat offenses and $10,000 if they caused harm by violating the quarantine.

“It’s like any other law,” Gov. Cuomo said. “You can drink too much and get in a car and drive home, and if you don’t get caught, you’re fine.

“You get sick and you go to a hospital from out-of-state and you test positive and you’ve been within the 14 days, you violated the law and you are going to have a problem.”

The advisory went into effect at midnight Thursday, and applies to both out-of-state and in-state residents. As of Thursday, travelers from Alabama, Arkansas, Arizona, Florida, the Carolinas, Washington, Utah and Texas are expected to self-quarantine when arriving in New York, New Jersey or Connecticut.

Florida Gov. Bob DeSantis quarantined New York travelers arriving in the Sunshine State in March when New York City and downstate counties were the nation’s epicenter of the disease. Last month, the Florida governor said it was the right decision and that the mandated quarantine saved lives.

“When New York City was the epicenter of the COVID outbreak, did the governor limit travel from that area? Of course not. In fact, he moved downstate COVID patients into upstate hospitals,” Mr. Barclay said in a statement Thursday. “He claimed a downstate quarantine would send the wrong message ‘socially and culturally.’”

“...that New York got it right, other states got it wrong,” he added. “Unfortunately, the facts tell an entirely different story.”

Assemblyman Mark Walczyk, R-116, said the mandated self-quarantine goes against the governor’s love of the unifying Latin phrase “e pluribus unum,” — translating to “of many, one” — which he had added to the state seal in April.

“We remember back to when he said he wouldn’t block infected New York City residents headed upstate during the shutdown,” Mr. Walczyk said Thursday. “We should all be doing our part to minimize the spread of the virus, regardless if you’re from New York or not, but sending ‘inspectors’ to knock down someone’s door and to see how long they’ve been here and if they’re quarantining is not the best use of taxpayer dollars and the state’s time.

“Just two months ago, Gov. Cuomo, in his constant quest for headlines, proclaimed that any restrictions on travel for New Yorkers would be an ‘act of civil war,’ and he even threatened Rhode Island with a lawsuit for asking New Yorkers to quarantine during the height of the coronavirus outbreak in this state,” Sen. Ortt said. “This list is subject to change daily, adding to the travel nightmare.”

Earlier this month, Democrats rejected Republican senators and assemblymembers proposed amendment to end Gov. Cuomo’s expanded emergency powers, which continue through Sept. 7, or Labor Day. The governor first declared a state of emergency due to the COVID-19 pandemic March 7 and has issued more than 40 executive orders since, including mandating the closure of schools and nonessential businesses to the latest travel advisory.

“New Yorkers and businesses have suffered enough, and the governor’s vindictive, hypocritical move against other states and on New Yorkers’ liberties does not help us move forward,” Sen. Ortt said. “It is time to stop (Cuomo’s) unbridled and unchecked powers and restore the decision making process to the Legislature before more damage is done to our citizens, businesses and overall economy.”

COVID-19 hospitalizations statewide dropped below 1,000 New Yorkers on Thursday for the first time since March 18 to 996 patients, according to the governor’s office. The state had a peak of 18,825 virus hospitalizations April 12.

The state had 749 new positive virus cases Wednesday, or about 1.1 percent of the 67,642 conducted tests, bringing the statewide total to 390,415 cases. The state’s 10 regions reported 2.2 percent new cases and lower Wednesday, the governor said, adding it took New Yorkers three months of hard work and “doing the right thing” to get and keep coronavirus numbers low.

“Look at the numbers — you played politics with this virus and you lost,” Gov. Cuomo said to states that reopened without restrictions. “Now you see 27 states with the numbers...death projections going up...it’s a real American tragedy we’re living through.”

To file a report of an individual failing to adhere to the state’s quarantine mandated under the travel advisory, call 1-833-789-0470, visit mylicense.custhelp.com/app/ask or contact your local health department.