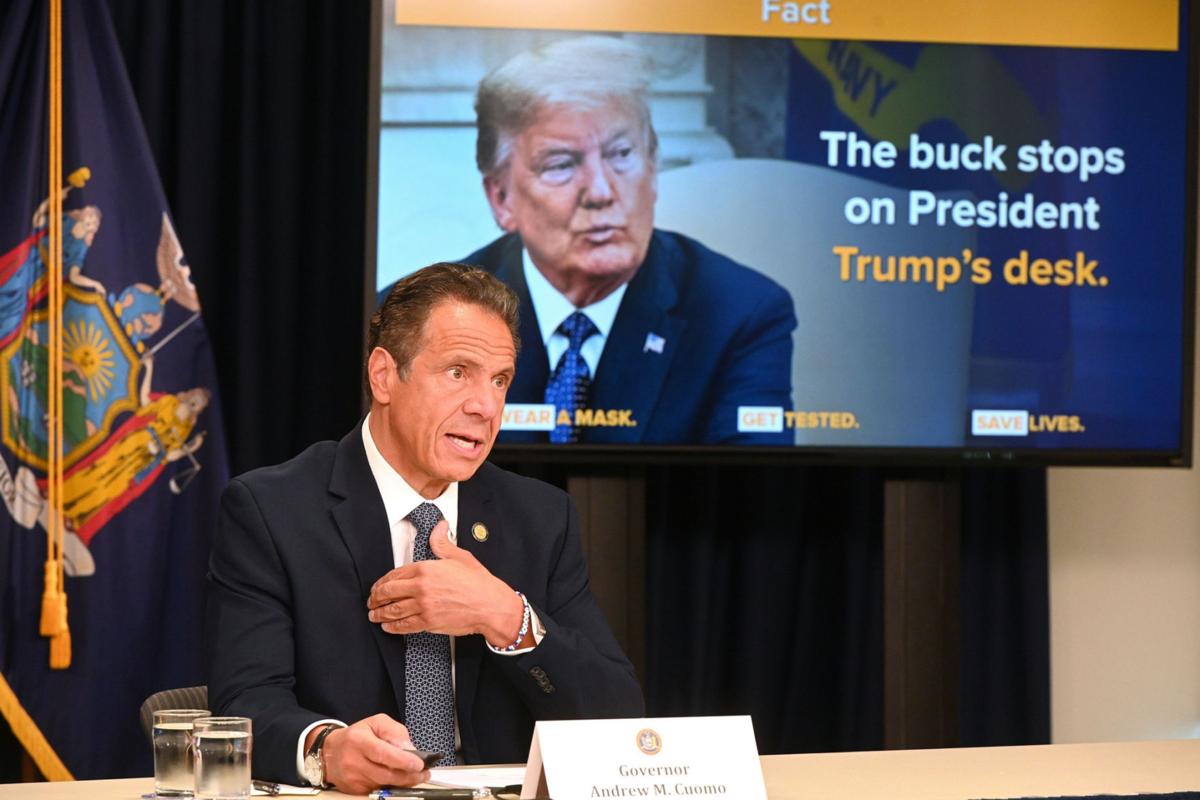 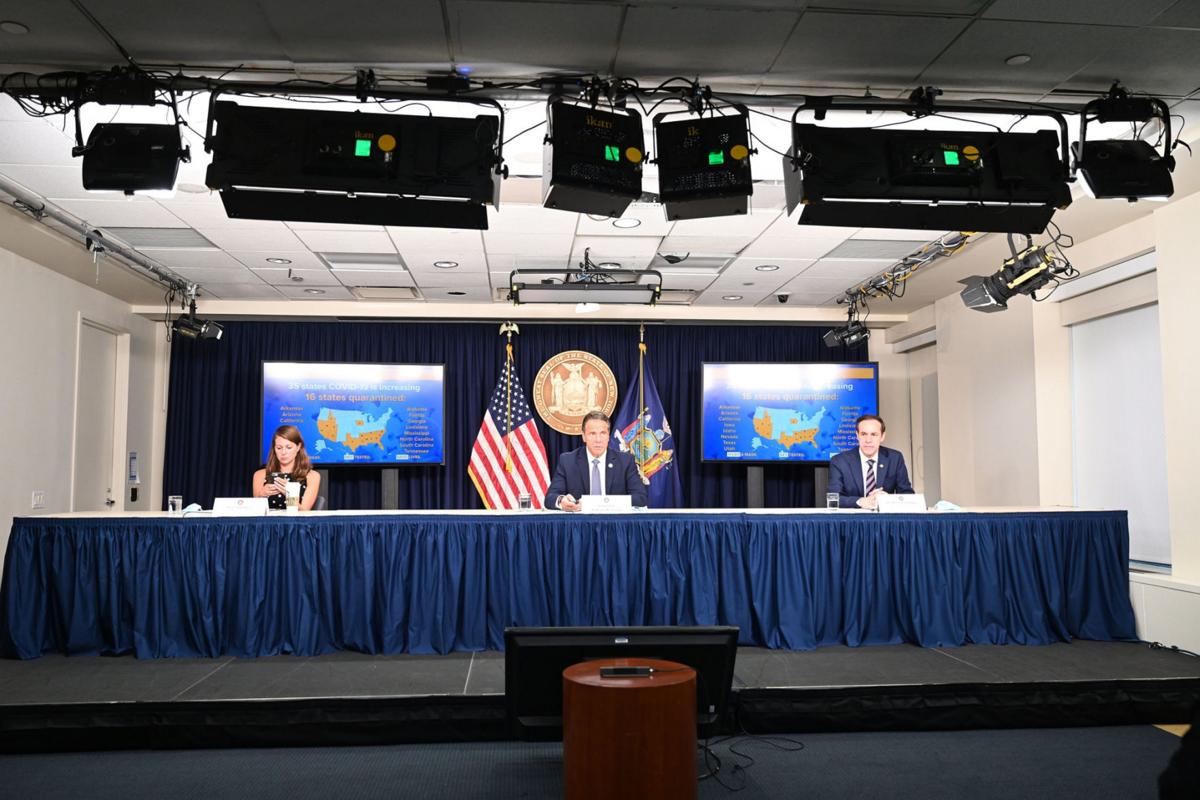 NEW YORK — New York will create its own coronavirus order enforcement department as Gov. Andrew M. Cuomo expressed concern Wednesday that the virus could resurge in the state as residents and local governments grow complacent in enforcing mask and social distancing measures and the pandemic spreads across the U.S.

State officials tasked with enforcing that New Yorkers remain socially distanced and wear facial coverings in public, including inside businesses, will supplement the state’s 500-plus local police departments as the governor said citizen compliance is slipping.

Indoor dining will remain closed in New York City as the city prepares to start Phase III of reopening Monday. COVID-19 testing rates across the five boroughs remain stable or below 1 percent positive, but the governor is concerned about restarting indoor dining in the city — the nation’s former coronavirus epicenter. State police, State Liquor Authority and Department of Health officials monitored patrons at city bars and restaurants Tuesday to help Gov. Cuomo and his aides make the citywide decision.

“Citizen compliance is slipping — look at any street in Manhattan,” Gov. Cuomo said during a pandemic briefing Wednesday afternoon in New York City. “I get why, but it is a very real problem.”

The governor pleaded with local governments to stay vigilant in enforcing state coronavirus orders, otherwise the virus would resurge in the state.

“Government is supposed to be enforcing compliance, that is not happening to a sufficient basis,” Gov. Cuomo said. “If you have citizen compliance dropping and you don’t have local governments enforcing, then you’re going to see the virus go up.”

The governor’s office has received compliance complaints from across the state, but it remains the largest issue in New York City where crowds are most likely to congregate. Indoor dining has resumed across the rest of the state and will not be affected.

The governor would not specify how long indoor dining will be prohibited in city bars and restaurants, adding it depends on New Yorkers’ behavior.

“It’s going to be postponed until the facts change and it’s prudent to open, but the facts have to change,” he said.

COVID-19 infections and hospitalizations continue to spread in 35 U.S. states and Puerto Rico, especially in Texas, Arizona and Florida, which have reclosed bars and reversed reopening in attempts to curb the outbreak. Gov. Cuomo blamed President Donald J. Trump for the nation’s failed virus recovery Wednesday for the second time this week, saying the federal government denied the severity of the virus and incorrectly urged states to reopen quickly to benefit the economy.

The president has continued to hold political rallies in packed arenas recently ahead of the November election, including a controversial Tulsa, Okla., event June 20 and another in Phoenix, Az., on June 23. Mr. Trump has not mandated attendees to wear masks and Gov. Cuomo continued his criticism of the president Wednesday for also not donning a facial covering in public and urged him to change his behavior and mobilize the government to successfully fight COVID-19.

“You know what, Mr. President? Reality wins every time. You don’t defeat reality...and now the country is suffering because of the president. It’s time for him to change course.”

Dr. Anthony S. Fauci, the nation’s leading infectious disease expert and leading voice on the White House Coronavirus Task Force, warned cases could grow to 100,000 a day in the U.S. if Americans don’t start following public health recommendations, such as wearing masks and practicing social distancing, to reverse the spread.

“That, my friends, is frightening,” Gov. Cuomo said.

U.S. states and cities must receive federal coronavirus aid, the governor said, to restart the national economy following the pandemic. The U.S. House’s fifth COVID-19 relief bill, the HEROES Act, which has sat in the Senate since May, would provide about $500 billion to states and $460 billion in aid to localities.

“We thought what the HEROES Act did was exactly right,” U.S. Sen. Charles E. Schumer said Wednesday to reporters on Capitol Hill.

The bill repeals the controversial State and Local Tax deduction, which allowed taxpayers of high-tax rates to deduct local payments on their federal tax returns.

“If they don’t fund state and local governments, you’re going to see massive layoffs all across the country,” Gov. Cuomo said. “My guess is they do it by the end of July, if I had a crystal ball.”

Most people mistake COVID-19 infection, hospitalization or death models as a prediction when the charts show what will happen if the current numbers continue, the governor explained.

All New Yorkers are eligible to get tested for COVID-19 as the state has secured enough testing supplies and capacity for New York’s roughly 19 million residents. Tests are free for all New York residents. The state performs more coronavirus diagnostic tests per capita than any nation across the world, including Italy, the United Kingdom, Canada and South Korea.

The state is requiring any malls, gyms or movie theaters to install a High Efficiency Particulate Air, or HEPA, filters, which have been shown to help reduce the presence of COVID-19 in air filtration or cooling systems, before they will be cleared to reopen. Gov. Cuomo said Wednesday the filter is a possible benefit to preventing the spread of the coronavirus, but would not be the sole factor in the state’s decision to resume those businesses in Phase IV.

State Department of Health Commissioner Howard A. Zucker said Wednesday that COVID-19 can spread through fecal matter or contamination, and recommends closing the lid before flushing a toilet. Dr. Zucker recommends businesses implement social distancing protocols by blocking off certain public restroom stalls with lidless toilets to reduce the possibility of virus spread.

The state reported 11 New Yorkers died from the virus Tuesday, including eight in hospitals and three in nursing homes, and down from 13 fatalities Monday. The state’s total virus hospitalizations decreased to 879, or down 11, according to the governor’s office.

To schedule a COVID-19 test or for more information about the virus, visit coronavirus.health.ny.gov/covid-19-testing.