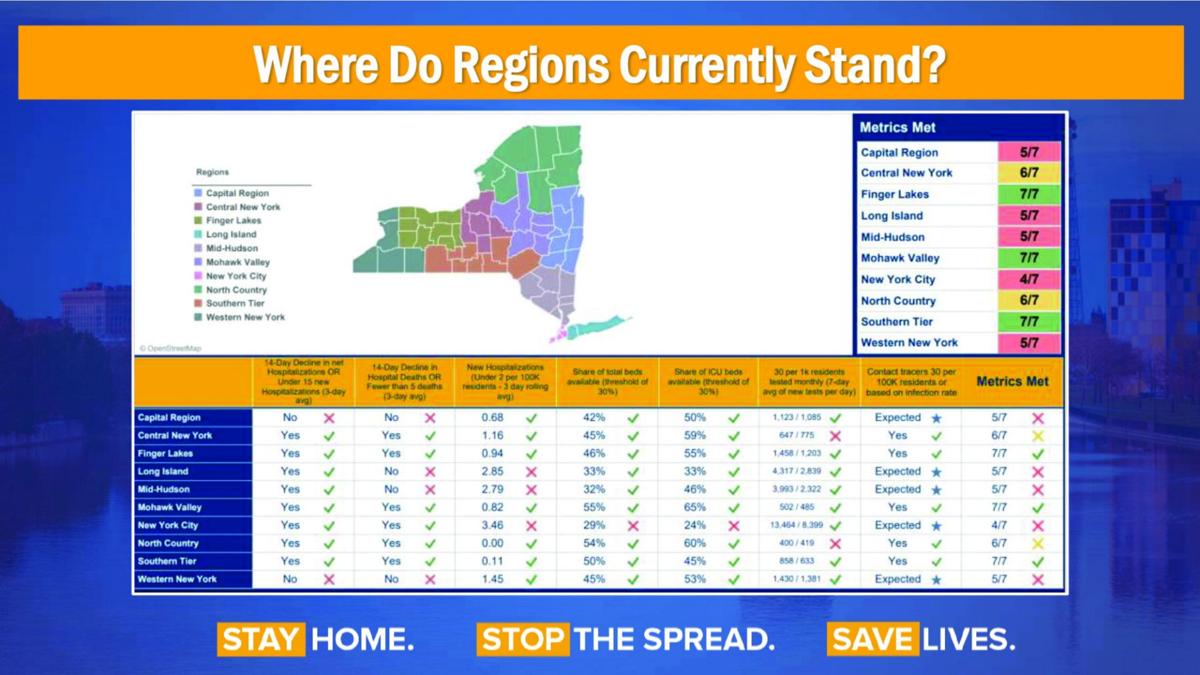 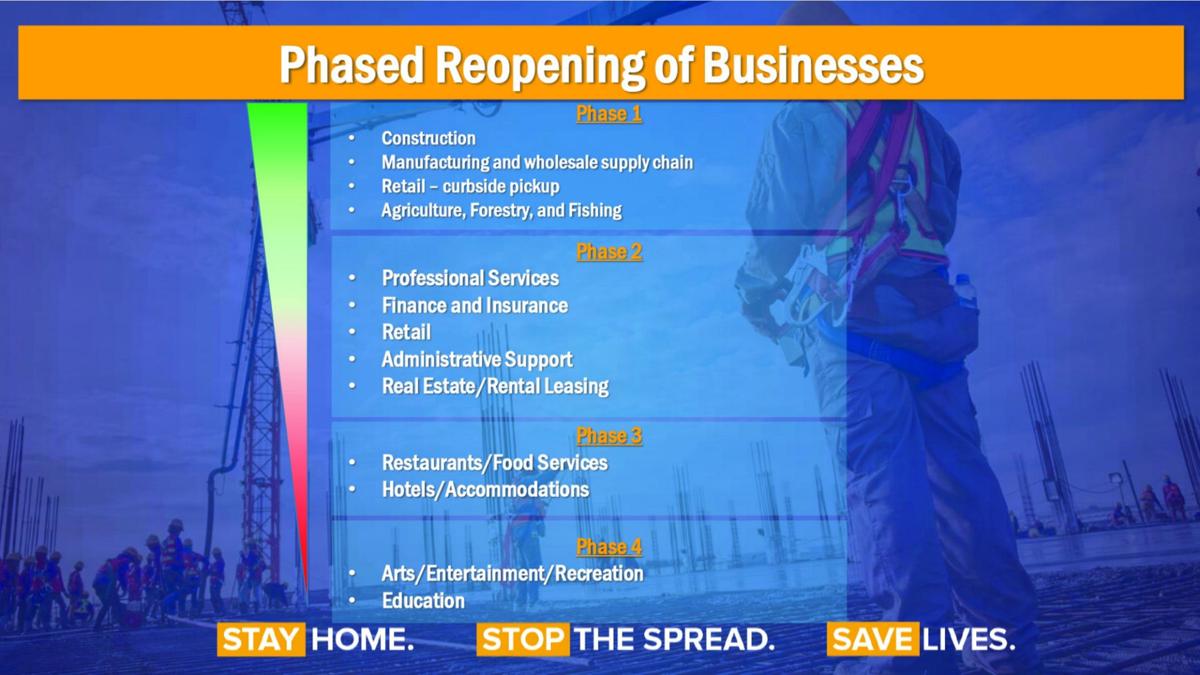 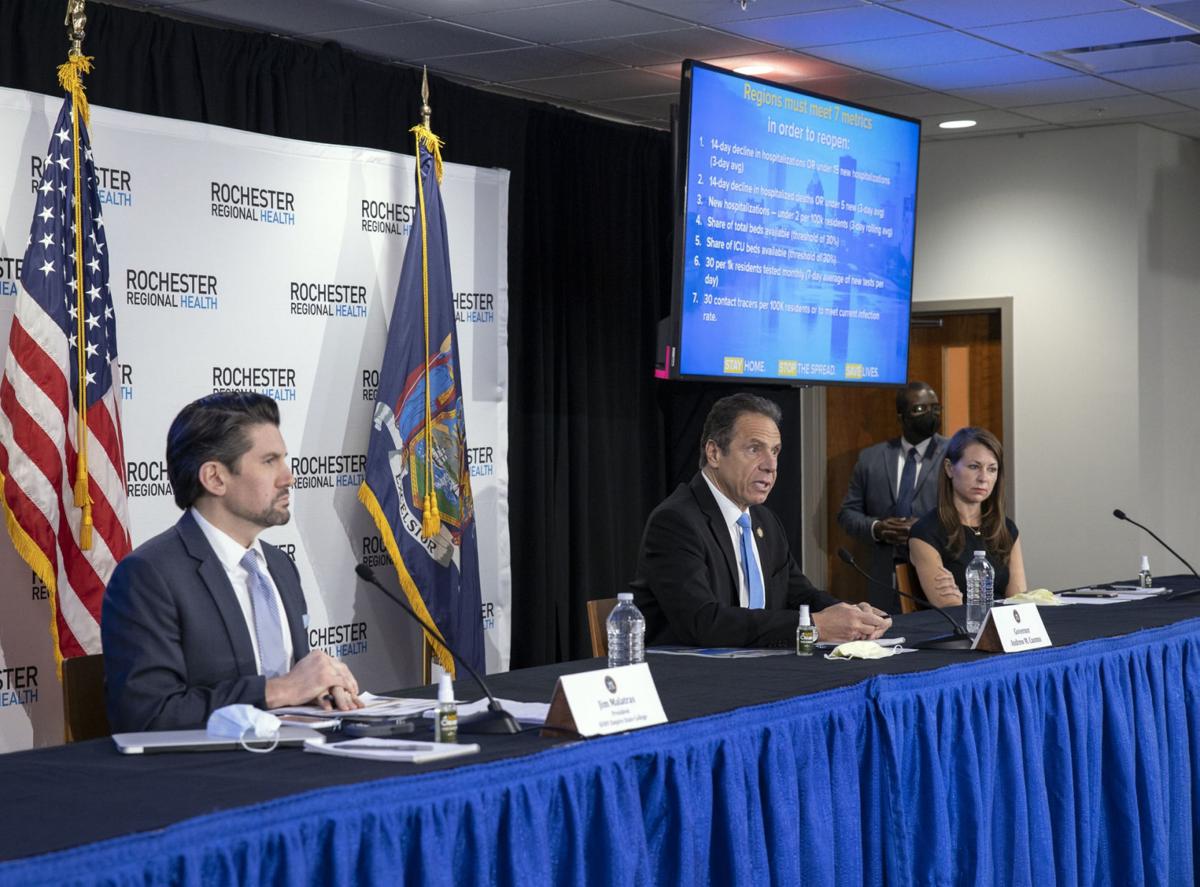 Are you surprised the north country does not yet meet Gov. Cuomo's criteria to begin reopening?

The state will also reopen select low-risk businesses at the end of the week, such as drive-in movie theaters, he added.

The area defined by the state as the north country — which is comprised of Jefferson, Lewis, St. Lawrence, Franklin, Clinton, Essex and Hamilton counties — is close to reopening and satisfies six of seven requirements. The region needs 30 per 1,000 residents tested for COVID-19 each month, a seven-day average of new tests each day. The region is 19 tests per day short of meeting the requirement to begin reopening Friday.

“We start a new chapter today in many ways,” Gov. Cuomo said Monday during a pandemic briefing at Rochester Regional Health. “Local officials across the state should prepare. We’re going to open when we’re ready to open.”

The regions will start with Phase I of the state’s four-phase reopening plan the governor outlined May 4. Businesses to open first include construction, manufacturing, curbside pick-up retail, forestry and fishing.

The state will open landscaping and gardening, outdoor low-risk recreational activities, such as tennis, and drive-in movie theaters Friday after the PAUSE order expires.

“Talk about going back to the future,” Gov. Cuomo said.

The state is divided into 10 regions to reopen. Seven, including the north country, remain that do not meet the state’s requirements to reopen: Western New York, Central New York, Capital District, Mid-Hudson, New York City and Long Island. To see each region’s progress, visit https://forward.ny.gov/regional-monitoring-dashboard.

New York’s COVID-19 fatalities reached at least 20,918 on Monday — up from 20,757 on Sunday. The state saw 161 virus-related deaths Sunday, including 112 in hospitals and 49 in nursing homes. The death rate declined slightly after remaining flat for more than a week at 207 fatalities Sunday, 226 on Saturday and 216 on Friday.

“That is just about where we started this horrific situation,” Gov. Cuomo said. “...back to March 19 numbers, before we went into the abyss of the COVID virus.”

The state tested 1,204,650 people as of Sunday, revealing 337,055 total positive cases of COVID-19. New York’s hospitalization rates continued a downward trend to 7,226 patients Monday, down 36, according to the governor’s office.

Gov. Cuomo spent much of Monday’s briefing reviewing the hardships that plagued the state since the pandemic hit, including a scramble for thousands of hospital beds and ventilators. Monday marked 72 days since New York’s first COVID-19 case.

Thousands more New Yorkers would have died if people had not complied with staying home and social distancing, Gov. Cuomo said.

“That is not rhetorical, that is not dramatic,” the governor said. “That is a factual statement...If we didn’t change the trajectory of this virus and we had 120,000 people show up at our hospitals, we would have made the situation in Italy look like a walk in the park.”

Members of the state Assembly minority sent a letter to the committees on Aging, Health and Oversight, Analysis and Investigations chairmen Monday requesting a hearing to review and investigate the state’s COVID-19 nursing home policies and decisions.

“Despite learning of the deaths of thousands of patients in nursing homes nationally, the state’s efforts to protect residents and staff at nursing homes across New York have fallen grossly short,” said Assemblyman Jacob C. Ashby, R-107, a minority ranking member on the Committee on Aging. “Our nursing homes lacked sufficient resources and assistance from the state to ensure an effective response. This is no way to protect and care for one of our most vulnerable populations.”

The governor will issue an executive order requiring all nursing home staff be tested for COVID-19 twice a week, starting this week.

“It’s a rule,” Gov. Cuomo said Sunday. “We have the tests available.”

Additionally, hospitals cannot release a COVID-19 patient to a nursing home unless that person tests negative for the virus. Facilities must submit testing plans and compliance certificates to the state Department of Health by Friday.

Gov. Cuomo’s new executive order does not reverse the state’s March 25 policy, which mandates nursing homes cannot discriminate against residents by not readmitting people who test positive for the coronavirus, officials said Sunday.

“The only avenue of coming to a nursing home is not just the hospital,” SUNY Empire State College President Jim Malatras said. “It could have been a new patient or from another facility...You can still not discriminate against a nursing home patient. If you’re in the hospital for another reason, you can’t discharge that patient until they’re negative.”

The state has 101,518 nursing home residents in more than 600 facilities. More than 360 have seen COVID-19 deaths, or 12 percent of virus fatalities statewide. New York ranks 34th highest in the nation for virus-related fatalities in nursing homes.

“The attorney general’s office and state Health Department have announced they will investigate what has happened, but as legislators, we must conduct our own inquiry into this critical matter,” said Assemblyman Brian Manktelow, R-130, a minority ranking member on the Committee on Oversight, Analysis and Investigation. “During what may very well be one of the worst pandemics in modern times, the state’s directives and reporting on nursing home incidents are alarming. While we are starting to see a slight decline in the prevalence of this virus, we are not yet out of the woods. We ask the chairmen of the Committees on Aging, Health and Oversight to convene an investigative hearing and demand answers so future issues may be prevented.”

Nursing home operators who do not follow the state guidelines could lose their license.

Nursing homes continue with other state orders, including restricted visitation except end-of-life visits; requiring all staff wear personal protective equipment, such as gloves, face masks and gowns, when interacting with residents; examining all staff for virus symptoms, including temperature checks, every 12 hours; and requiring facilities to notify all residents and family members about a COVID-positive test result or death within 24 hours.

Three New York children, including two elementary school-aged children and an adolescent child without any underlying conditions, have died from COVID-19 complications causing inflammation of blood vessels and extremities, mimicking symptoms similar to severe illnesses such as Kawasaki disease and toxic shock syndrome.

Two additional child deaths that occurred over the weekend are under investigation for potential coronavirus complications.

NY sucks, controlled by a dictator!!!

I don't think Cuomo put together the North Country "control room." It's likely Cuomo and his team appointed a single person to head it, and the person chose or solicited the help of the remaining "control room" members.

The collective intelligence of the North Country "control room" will be compromised by the absence of women.

I'm sorry you think NY sucks and is controlled by a dictator. I don't. I think Cuomo took charge of a cataclysmic crisis and responded with rational, scientific and data-driven strategies and mandates.

It is politically incorrect to say that people who did poorly in school don’t understand this disease or how the world works.