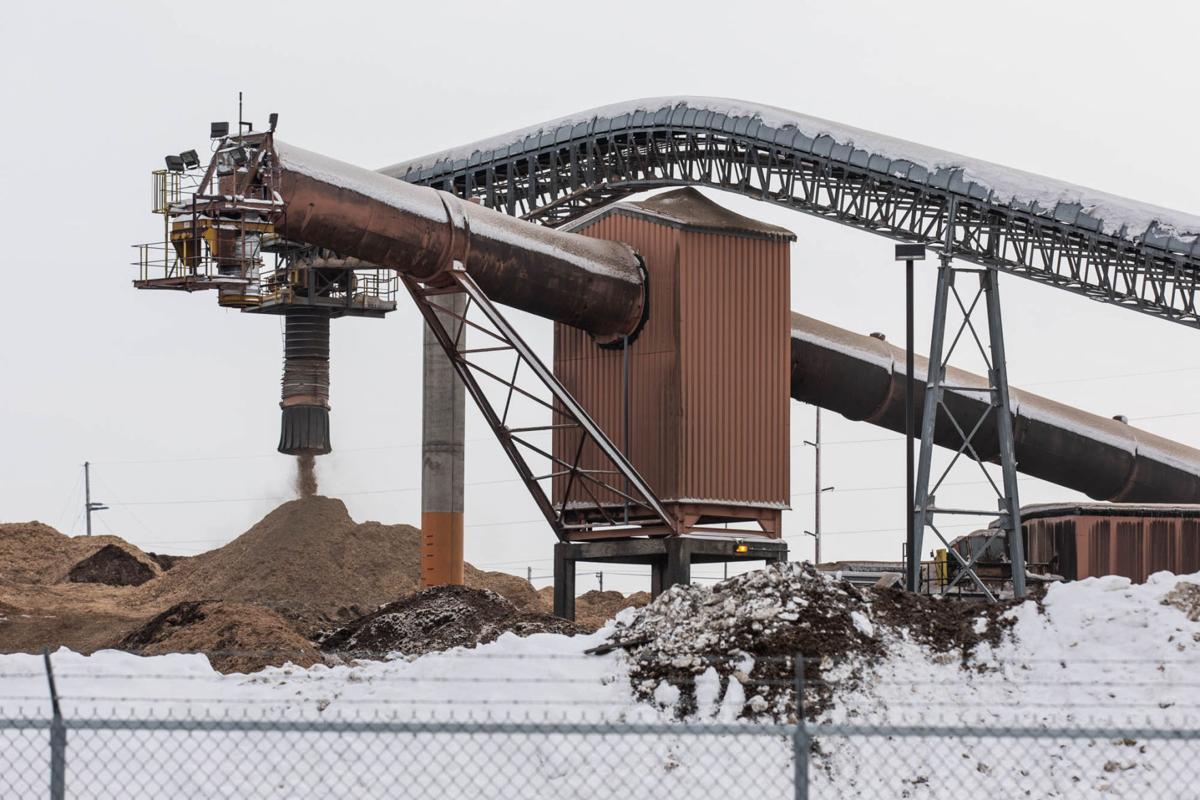 The low-grade wood fuel enters the biomass plant on Fort Drum through this long conveyor belt. 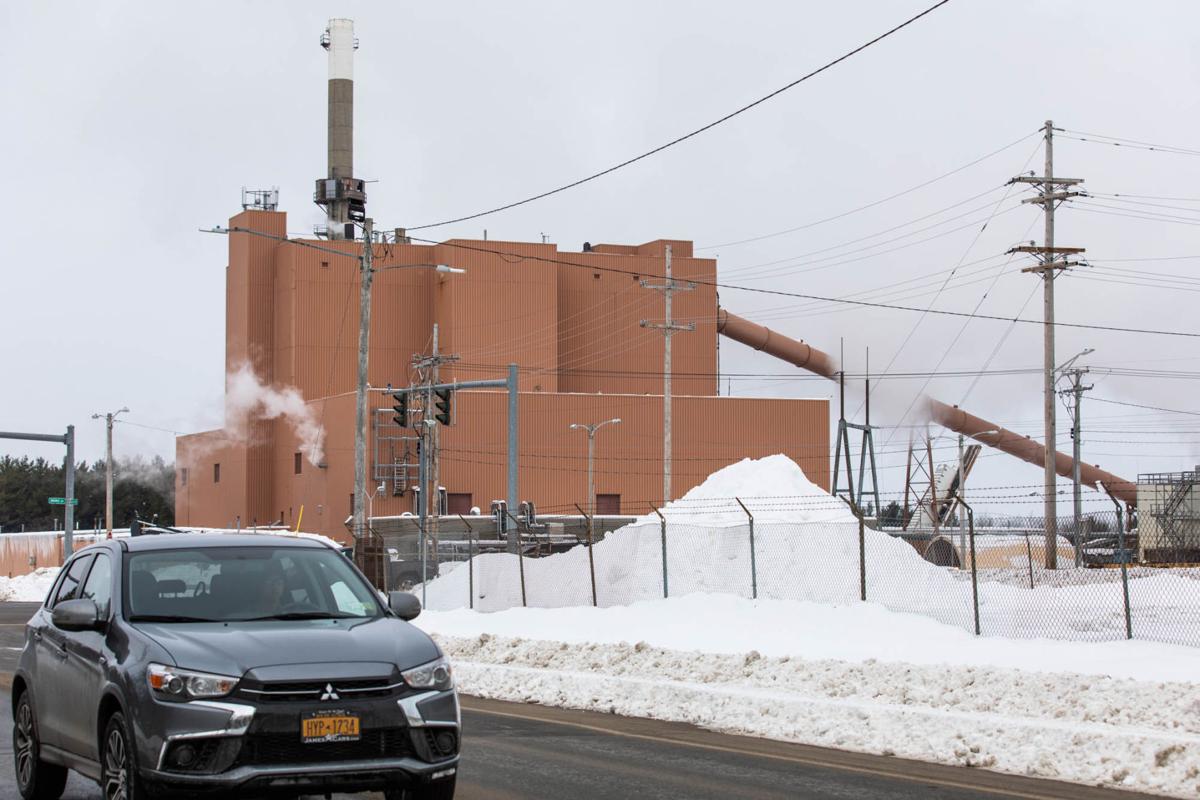 The biomass plant on Fort Drum could close if the Army changes its agreement with ReEnergy Black River LLC, which leases the property. 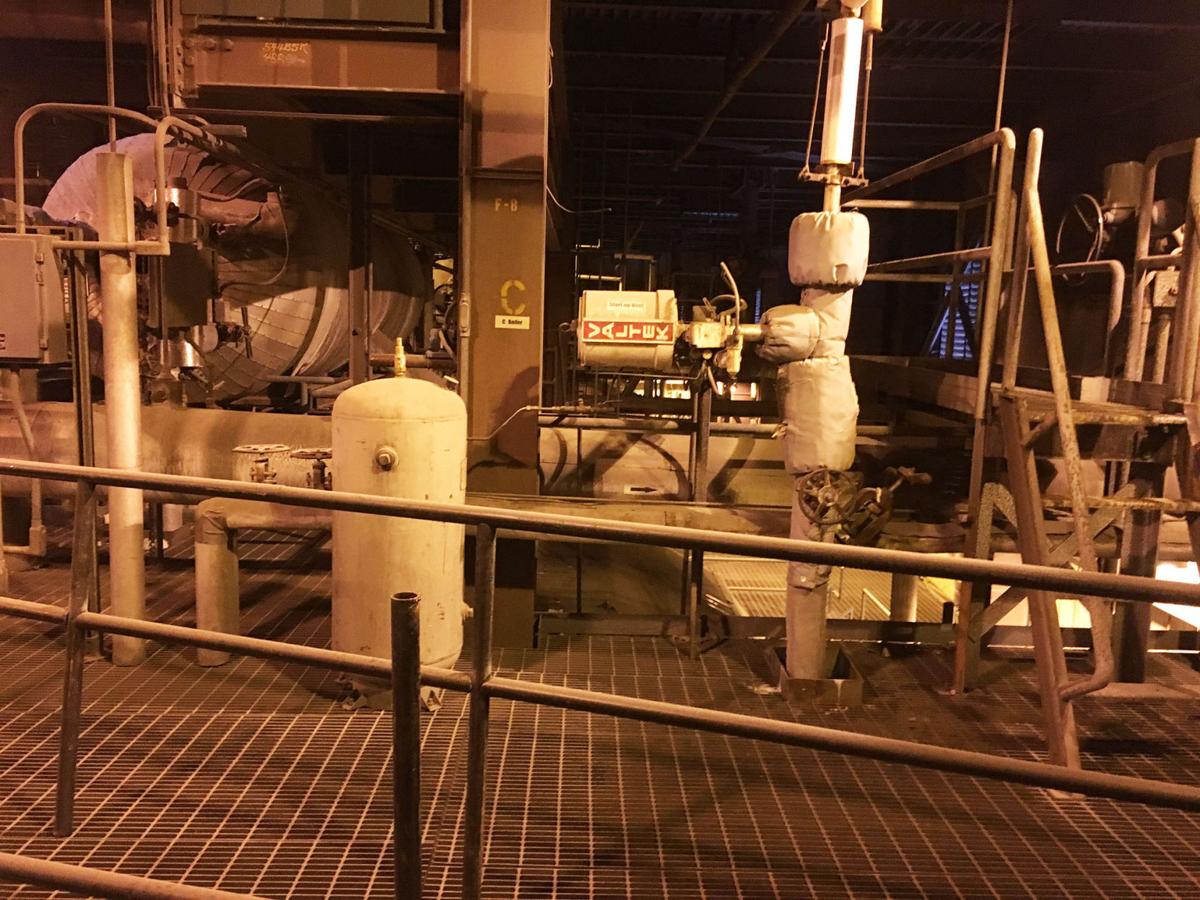 Equipment in a nine-story wood-chip burning plant creates electricity for Fort Drum in a biomass project on post. The plant’s future is now in doubt. 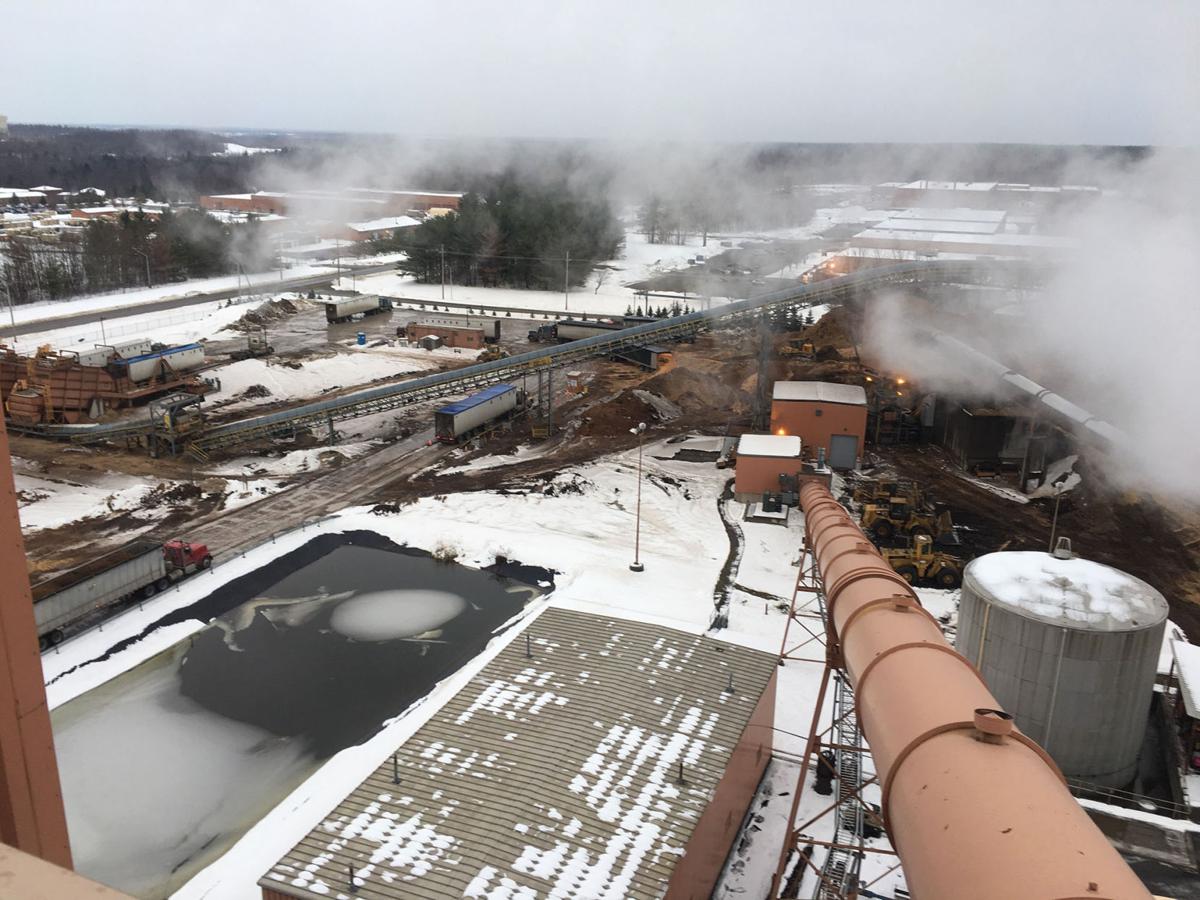 A view of the sprawling property where the ReEnergy Black River plant sits. The massive main pile of wood chips weighs 30,000 tons. 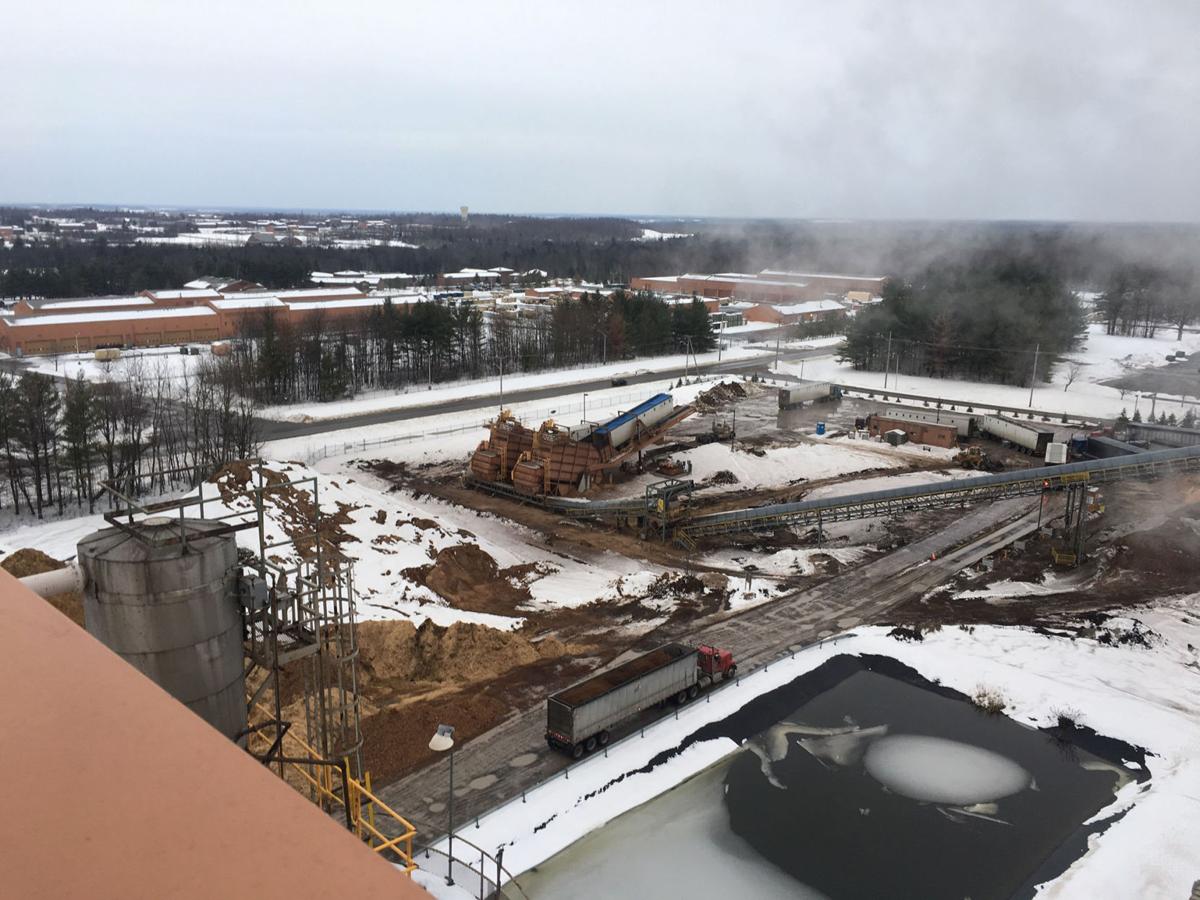 Between 60 and 70 trucks a day bring the wood-chip material to the biomass plant. 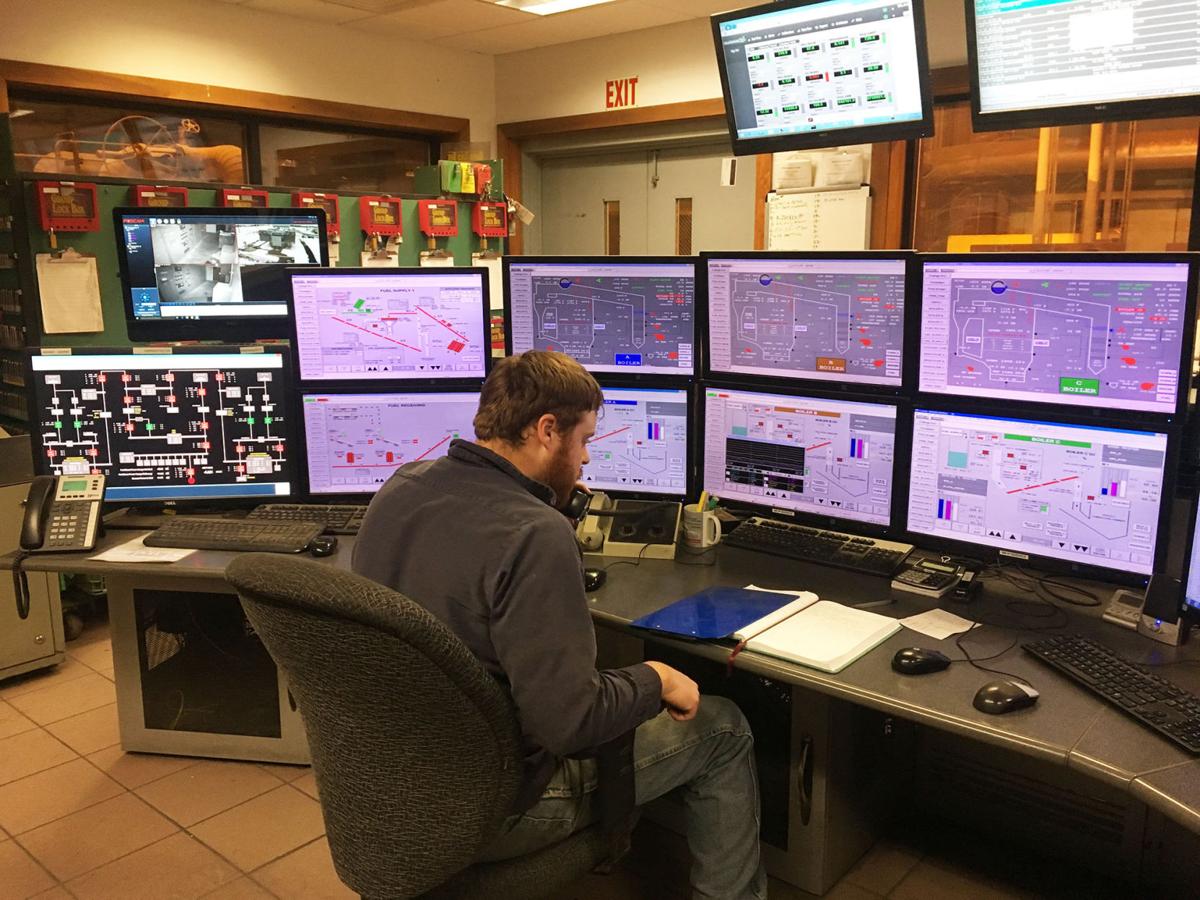 Employees watch over the wood-chip burning process from a control room in the plant on Fort Drum.

The low-grade wood fuel enters the biomass plant on Fort Drum through this long conveyor belt.

The biomass plant on Fort Drum could close if the Army changes its agreement with ReEnergy Black River LLC, which leases the property.

Equipment in a nine-story wood-chip burning plant creates electricity for Fort Drum in a biomass project on post. The plant’s future is now in doubt.

A view of the sprawling property where the ReEnergy Black River plant sits. The massive main pile of wood chips weighs 30,000 tons.

Between 60 and 70 trucks a day bring the wood-chip material to the biomass plant.

Employees watch over the wood-chip burning process from a control room in the plant on Fort Drum.

FORT DRUM — Four years ago, the Army promised ReEnergy Black River LLC that its $50 million biomass facility on post would provide 100 percent of Fort Drum’s electricity for the next 20 years.

The agreement was announced with much fanfare as the Army’s largest renewable energy project, and it would create 33 jobs at the forestry-waste-burning facility.

But all of that might come to an end.

Now, just a few years into the $289 million contract, the Army wants to pull the plug on the agreement with the company that provides the electricity that powers Fort Drum.

If that happens, Larry D. Richardson, ReEnergy’s CEO, says he’ll be forced to shut down the mammoth facility.

“It’ll be devastating,” he said.

When it was promised the deal, the Latham company invested $50 million to convert the former coal-fired plant into a biomass facility and construct an intertie system between the facility and two electrical substations serving Fort Drum.

The Defense Logistics Agency, a Department of Defense agency handling the discussions with Re­Energy, has proposed using the electricity from the plant only for backup purposes, rather than 100 percent of Fort Drum’s energy needs, according to company officials.

Mr. Richardson questions the fairness of the proposed change. He believes “it’s a thinly veiled notice” that the Department of Defense wants to walk away from its contractual obligations.

In an email, a DLA spokeswoman said the proposal was brought forth by the Army.

“As the procurement agent for the Army, DLA Energy administers the contract with ReEnergy Black River LLC to supply energy from its biomass generation facility to Fort Drum,” she wrote.

“The Army communicated to DLA Energy that its energy supply requirement at Fort Drum has changed. DLA Energy is therefore evaluating what options are available under the contract. No final decisions have been made.”

The DLA spokeswoman declined to say why the energy requirements for Fort Drum changed, referring that question to the Fort Drum Public Affairs Office or the Army, since “it was their decision.”

“DLA administers the contract for the Army — we don’t determine the requirements,” she wrote.

“I am not able to respond to your inquiry,” she said in an email.

But John K. Bartow Jr., executive director of the Empire State Forest Products Association, said the Army is proposing the change because the cost of electricity is down and it could get a better deal to obtain power from National Grid.

“That’s for the moment,” Mr. Bartow said, adding that pricing in the market is bound to change.

The proposed changes would have crippling economic impacts on ReEnergy, Mr. Richardson said, stressing that the company spends $15 million a year to purchase fuel for the plant.

The plant consists of three identical 80-foot-tall boilers, of which two are used at all times to produce electricity.

Using 12,000 tons of material a week, they operate at 950 degrees at 1,500 pounds of pressure. At full load, the plant uses 25 tons of wood an hour, said facility manager Peter Lister.

Between 60 and 70 trucks, each carrying about 30 tons of wood material, parade through the large complex a day. Forty-five-foot-long trailers back up and dump the material into hoppers, where the fuel is stored in a bunker until further transport to the boiler on a long conveyor belt.

The nine-story plant consists of turbines, piping, conveyor belts and other equipment; the fuel goes through a complicated process until it’s converted into power, Mr. Lister said.

The faint smell of wood burning is noticeable throughout the building. The second floor reaches temperatures of 90 to 95 degrees and 125 degrees in the summer. Stair railings on the lower floors are hot to touch.

It takes a minimum of four highly-skilled workers to operate the plant.

The Fort Drum plant closure would impact not only ReEnergy and its employees, but also the 75 suppliers that provide the low-grade lumber — which starts out as tree limbs and branches, sawmill residue and tree stumps — used in creating the electricity.

About 300 jobs related directly to the Fort Drum facility would be lost, hurting the state’s forestry industry, Mr. Richardson said.

The 60-megawatt plant is the only market for the low-grade fiber in this part of the state, said Patrick J. Curran, owner of Curran Renewables LLC and Seaway Timber Harvesting Inc., both of Massena. The two closest are in Ticonderoga and Glens Falls.

“It’s the only demand in Northern New York to get rid of it,” he said. “There’s nowhere else to do it.”

If the plant goes dark, Curran would have to cut 15 jobs directly related to work provided by his company to the wood-chip-burning facility, he said.

The company invested $2.5 million in wood chipping and other equipment — which it’s still paying on — when it signed it contract with ReEnergy in 2015, he said.

The news also would be bad for Beller Logging and Land Clearing, Carthage, which invested about $2 million in equipment it needed to supply material to the Fort Drum plant, said owner Gary Beller.

Logging companies, pulp and saw mills, truckers, fuel companies, equipment dealers, landowners and farmers all would be hurt by the loss of the Fort Drum facility, Mr. Beller said.

It also would come at a bad time for the state’s soft renewable industry, Mr. Bartow said.

The Army also would be taking a risk if it closes the plant, Mr. Richardson said.

Located within the fenced-in area of Fort Drum, the facility provides tight security at all times, something that cannot be promised on the grid, Mr. Richardson said. It’s also provided consistent, reliable power to Fort Drum. National Grid has outages.

They were notified in June about the proposed change. ReEnergy requested to meet with DLA officials discuss the proposal, but the government has not followed through with a promise to meet.

Rep. Stefanik sent a letter Dec. 5 to Secretary of the Army Mark Esper asking him why the change was proposed. She also wanted to know why the DLA hasn’t been willing to meet with the company.

Mr. Richardson hopes that the legislators can ward off the changes and that the plant will remain open.

When it went online three years ago, the facility was billed as a sign of energy independence for the military and economic development for the north country.

Mr. Richardson insisted the plant can still live up to those promises.