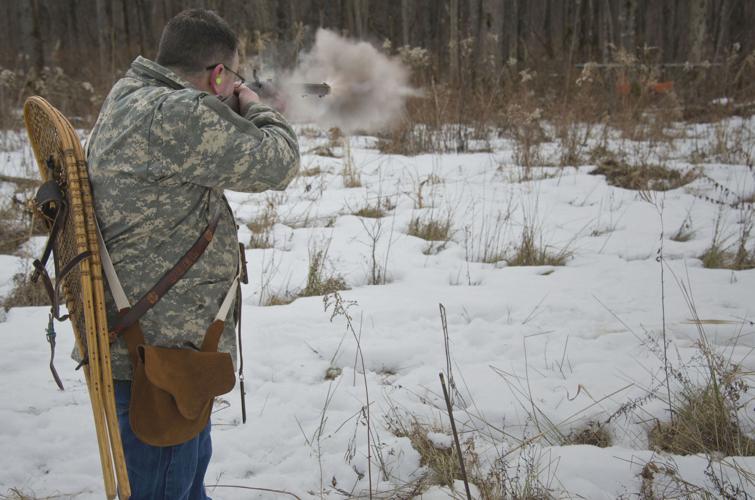 Joel Hein shoots at the targets on the course Saturday during the Snowshoe Biathlon. 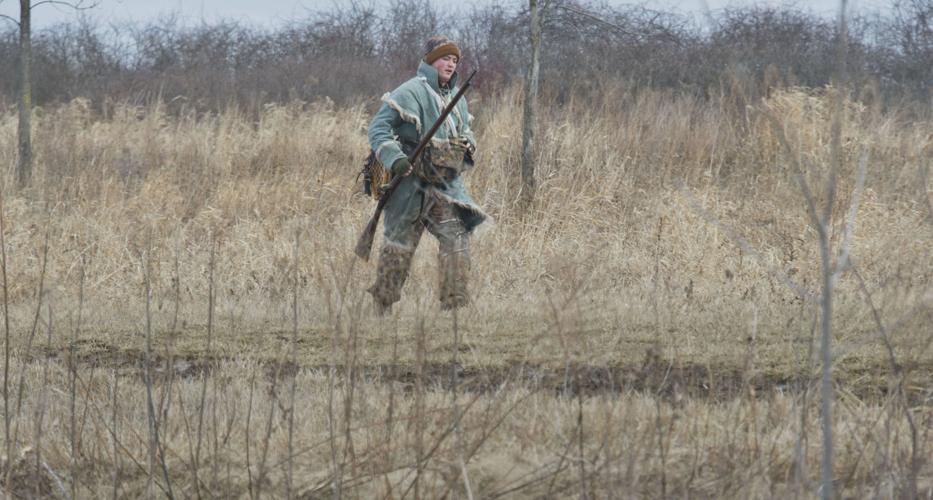 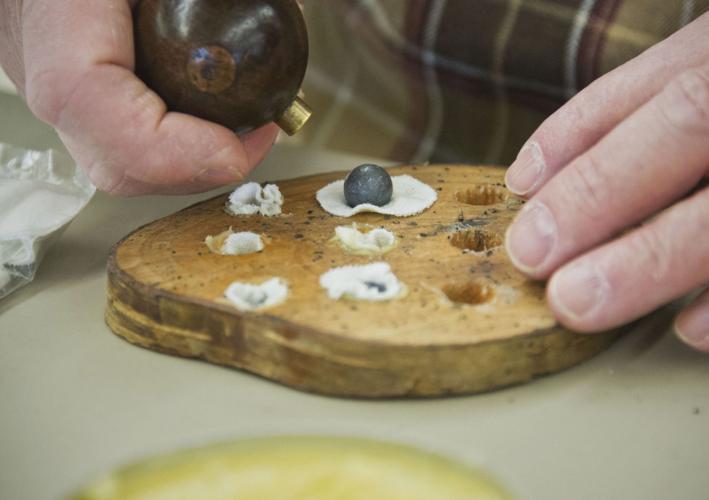 Lead shot is coated in mink oil, wrapped in a piece of cloth and placed in a hole in a black of wood for easy loading in the field before the start of the Lisbon Sportsman’s Club, Snowshoe Biathlon. 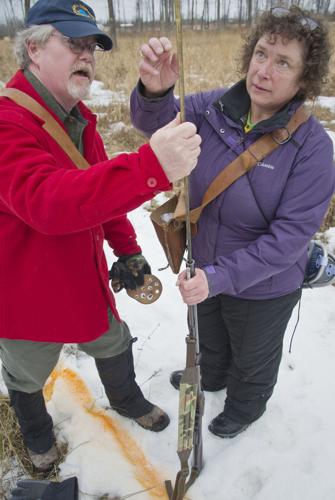 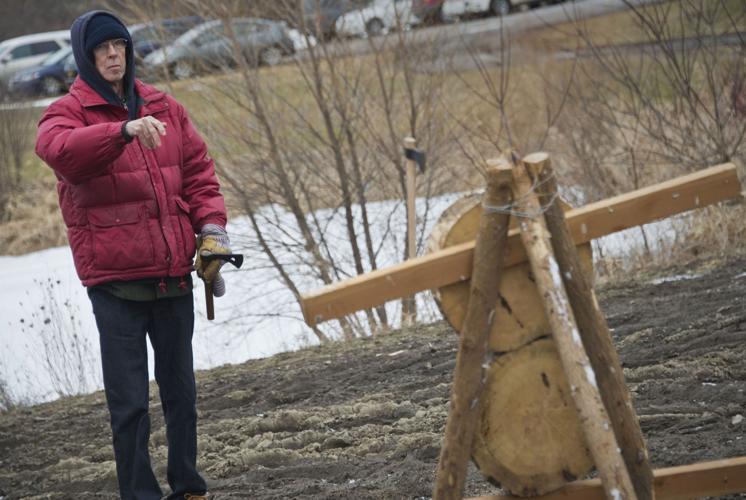 Time keeper John Miller III tries out the tomahawk toss at the start finish, competitors that where successfully hitting one of the two targets had five minutes subtracted from their times at the Lisbon Sportsman’s Club, Snowshoe Biathlon. 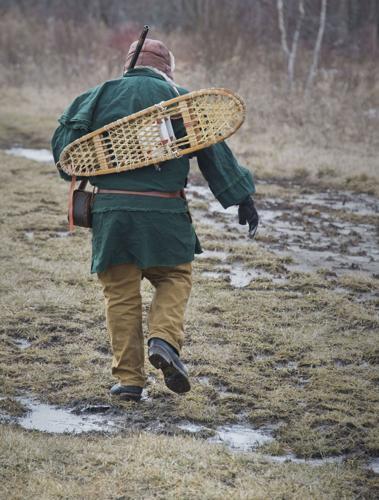 Joel Hein shoots at the targets on the course Saturday during the Snowshoe Biathlon.

Lead shot is coated in mink oil, wrapped in a piece of cloth and placed in a hole in a black of wood for easy loading in the field before the start of the Lisbon Sportsman’s Club, Snowshoe Biathlon.

Time keeper John Miller III tries out the tomahawk toss at the start finish, competitors that where successfully hitting one of the two targets had five minutes subtracted from their times at the Lisbon Sportsman’s Club, Snowshoe Biathlon.

LISBON — The first person to run the Sixth Annual St. Lawrence Valley Snowshoe Biathlon on Saturday, Sara J. Ricalton, learned how to shoot her borrowed rifle on the course.

“I’ve never shot — I guess it’s called a muzzle loader? I’ve never shot one of these at all,” she said, before slinging the gun and ammunition bag over her shoulder, her snowshoes — useless in the mud — over her back, and heading out on the course.

The biathlon, held at the St. Lawrence Sportsman’s Club in Lisbon, consists of a mile-and-a-half route with five shooting stations. Each competitor walks or runs the course on snowshoes, stopping at each station and firing two shots. Their run is timed, and each hit on a target takes five minutes off their final time, as does landing an optional tomahawk throw at the end.

The event is a fundraiser for the Fort La Presentation Association, and many of the competitors are re-enactors running the course with old-style caplock or flintlock guns and wooden snowshoes, although people with modern equipment can compete in their own divisions. If there is not enough snow, like on Saturday, competitors have to carry the snowshoes on their backs during the run.

“I like to shoot muzzle loading rifles, I love to snowshoe, you put the two together, it’s a lot of fun for me to do,” said Frederick J. Hanss, the event coordinator and a member of the board of directors for the fort. “By this time in winter, most people have cabin fever, and that happens to me, I get cabin fever along about March, I’m ready to go outside.”

The event is one of six or seven snowshoe biathlons modeled after the original Smugglers’ Notch Primitive Biathlon in Vermont, and many people travel through New England and New York to attend the events.

“The people who run biathlon run a circuit,” said Lisa J. Hanss, Mr. Hanss’s wife, who volunteers at the event. “We’re one of the stops on the circuit.”

Attendance on Saturday was down, possibly because of a competing event in New Hampshire, but in years past the St. Lawrence event has brought people from across the state and outside, as well.

“We’ve had Vermont, Pennsylvania, Ohio — last year, we had someone from Ohio,” said Marsha E. Hough, a board member of the Fort Association and a member of a local re-enacting group, Forsyth’s Rifles, who was volunteering at the biathlon.

Usually the event brings 25 or 30 competitors and 15 to 20 volunteers to register people and monitor the shooting stations. Competitors pay an initial registration fee, but can run the course again for $5. According to Mr. Hanss, most competitors run the course as many times as possible over the two-day event, trying to beat their own time and stay ahead of everyone else.

Some competitors came dressed in period clothing, like Ben Gardner, who wore a fur-trader style hunting frock and shirt under handmade leather ammunition pouches. Mr. Gardner won the youth division in the biathlon the first year, and has been coming back since.

“I’ve been shooting black powder for 15 years, since I could pull the trigger,” he said. “It’s a dying sport.”

Most competitors, though, like Ms. Ricalton, came in more modern gear — bright orange hunting coats, snow pants and heavy boots for the puddles and mud along the trail.

Ms. Ricalton had heard about the event through Mr. Hanss, and having recently become interested in biathlon, decided to give the event a go.

“Over the winter break, I was staying in Lake Placid with my sister, and she always wanted to try biathlon,” she said. “So we went over to the Olympic biathlon range, and I shot 10 for 10.”

While she had only shot modern guns, Ms. Ricalton decided to try muzzle loading. At the first station, Mr. Hanss helped her with the sequence for loading — dump in the powder, ram in the ball and greased wadding, and prime the gun — before taking aim at the target at 25 yards.

Ms. Ricalton made her first shot.

Soon Ms. Ricalton was loading and firing on her own, speeding up as she went. At each station, she handed a slip of paper to the judge, who marked off hits and misses as competitors fired.

“I used to run a lot when it first started, but I’m really enjoying judging,” said Luke Hanss, Mr. Hanss’s son and a judge at one of the stations. A student at SUNY Potsdam, Luke Hanss has been shooting black powder since he was 12, but enjoys running the shooting stations more than competing now.

By the end, Ms. Ricalton had landed five of her 10 shots and missed the tomahawk throw, taking 25 minutes off her total time.

She plans on coming back next year, hopefully with her own gun.

“That was great fun, I can’t believe I can do it again,” she said, as she rested before her next run.