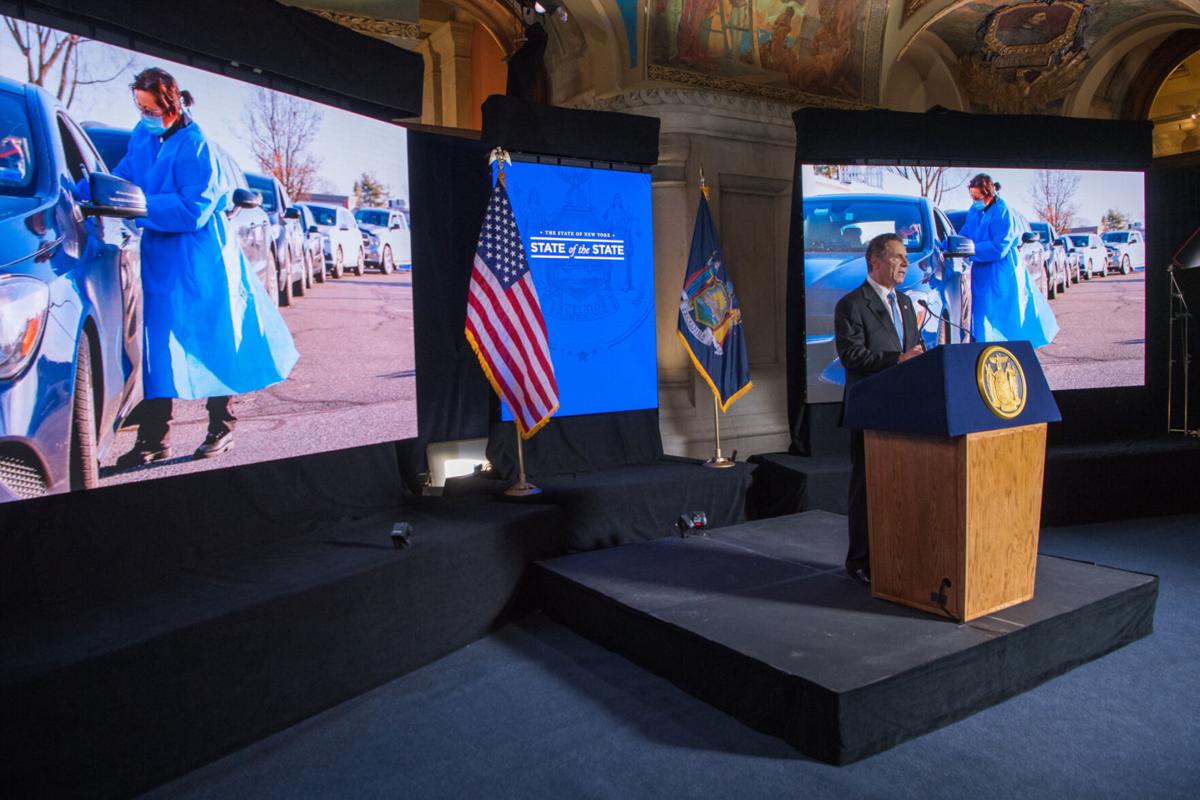 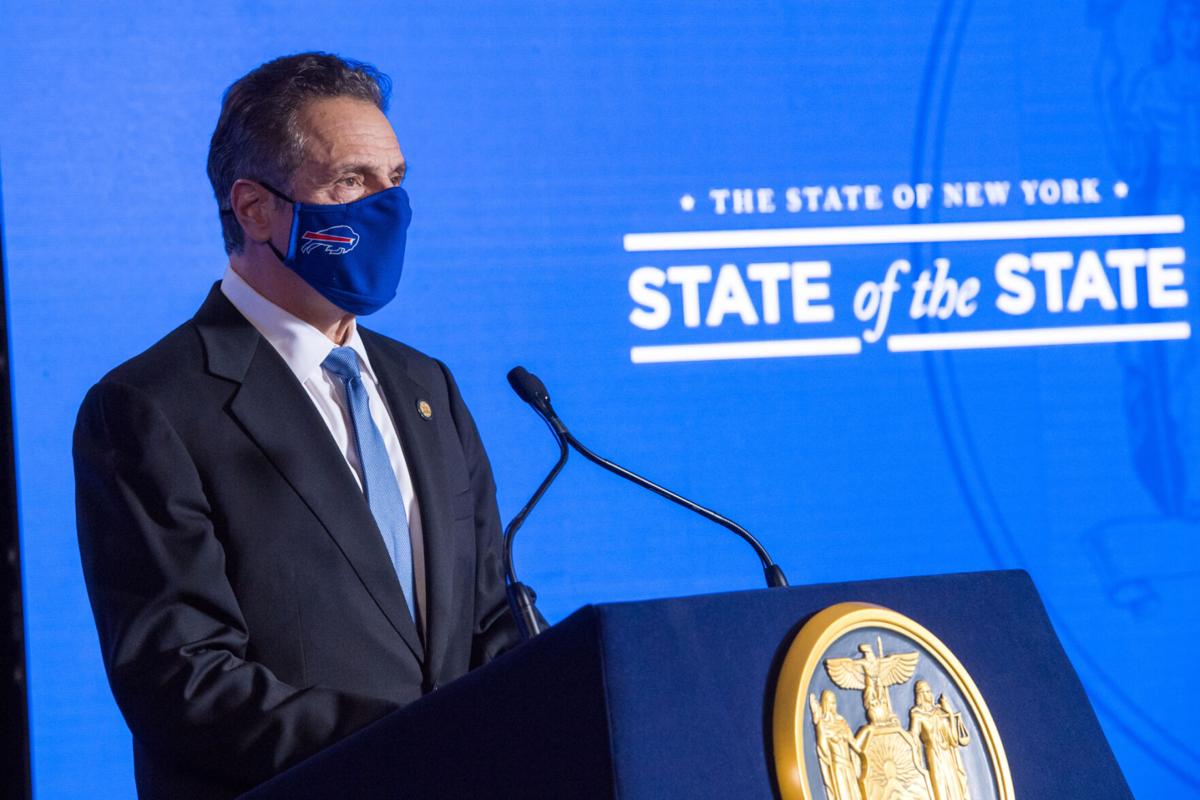 ALBANY — Low-cost high-speed internet service for all New Yorkers and rejuvenating the arts will be top state priorities through 2021 to rebuild a post-COVID-19 economy, Gov. Andrew M. Cuomo said Tuesday in a continuation of this year’s four-part State of the State address.

More people rely on dependable, affordable, high-speed broadband connectivity as an increasing number of Americans are working from home or attending school than ever before because of the coronavirus pandemic. New Yorkers, especially in poor and rural communities, have lacked proper internet access for years.

The emergence of the remote economy is a new reality that will continue to expand, Cuomo said, and requires high-speed internet for all New Yorkers.

“We must embrace it, not deny it,” the governor said Tuesday. “We must prepare and help guide it. We need to ensure a level playing field. No one can be left behind. New York must be the first state to develop the infrastructure of the future.”

The governor delivered the second of his four-part 11th State of the State address virtually late Tuesday morning from the War Room inside the state Capitol. The annual speech is traditionally attended by thousands of people in Convention Center inside the Empire State Plaza, but is virtual this year because of the COVID-19 pandemic.

The state plans to pass a mandate for internet service providers to recognize their public responsibility to offer affordable broadband access and offer service to low-income households for $15 a month. A fund will also be established for families that cannot afford the monthly $15 through a partnership with former Google CEO Eric Schmidt, Rockefeller Foundation Chairman Richard Parsons and Ford Foundation President Darren Walker.

About 98% of New York residences have access to some type of broadband connection. Basic high-speed internet plans cost upward of $50 per month — an unacceptably high figure that roughly 20% of American families cannot afford, the governor said.

“We now have a different challenge: Affordability,” Cuomo said. “Access is one thing, but access if it’s not affordable is meaningless. For too many families ($50) just isn’t affordable. Without affordable broadband, families are left behind, social injustice is increased, telemedicine is not an option. Without broadband, you can’t apply for most jobs.”

Many children who relied on remote learning during the pandemic without high-speed broadband access have fallen behind, especially in low-income and Black or Latino communities, creating a deeper educational divide.

New York officials, organizations and performers will work together through 2021 to accelerate the return of the performing arts, including live theater, musicians and Broadway performances, among many others devastated by the COVID-19 pandemic.

More than 150 artists and celebrities are scheduled to perform at state parks and other properties, including Amy Schumer, Chris Rock, Hugh Jackman and Renee Fleming, among others, as well as organizations such as Albany Symphony Orchestra, National Black Theater, Ballet Hispánico and more.

The state Council on the Arts will spearhead efforts. Flexible venues that allow for proper social distancing will be used.

“Cities are, by definition, centers of entertainment, theater and cuisine,” Cuomo said. “Without that, cities lose much of their appeal. What is a city without social, cultural and creative synergies? ... We must bring culture and arts back to life.”

Fifty-two percent of actors and 27% of musicians were out of work as of September 2020. The state’s arts and culture industries account for nearly 500,000 jobs, generating roughly $120 billion in economic revenue, the governor said.

The performances will culminate with the opening of Little Island at Pier 55 theme park and the 20th anniversary of New York City’s Tribeca Film Festival in June.

“We must act,” Cuomo said. “We cannot wait until summer to turn the lights back on for the arts and provide a living wage for artists. We will not let the curtain fall on their careers or the future of our cities,” he said.

The state will also continue piloting large public events with pre-COVID testing beforehand. BioReference Labs, together with the state Department of Health, tested about 7,000 fans before Saturday’s Buffalo Bills playoff game, where only about 1.9% tested positive in the days leading up to the event.

The state will also launch a Creative Rebuild initiative in partnership with Andrew W. Mellon Foundation President Elizabeth Alexander to fund dozens of community arts groups who each play a vital role.

The goals for 2021 are ambitious, but not impossible, the governor assured New Yorkers on Tuesday.

“None of what I have outlined today will be easy,” Cuomo said. “The reality is, not all businesses will be open. Not all jobs will come back as they were. We will come out stronger on the other side if we will anticipate the changing economy. The remote economy is now real.”

The governor’s State of the State features a multi-part, seven-point speech centered on defeating COVID-19 this year, vaccinating all New Yorkers, addressing the state’s economic crisis, investing in the future by jump-starting the economy with infrastructure projects, a focus on bolstering the state’s green-energy initiatives, understanding the long-term effects of COVID and addressing the state’s and nation’s systemic racism and injustices.

Cuomo is expected to continue with the third part of the speech at 11:30 a.m. Wednesday to discuss the state’s green-energy plan.