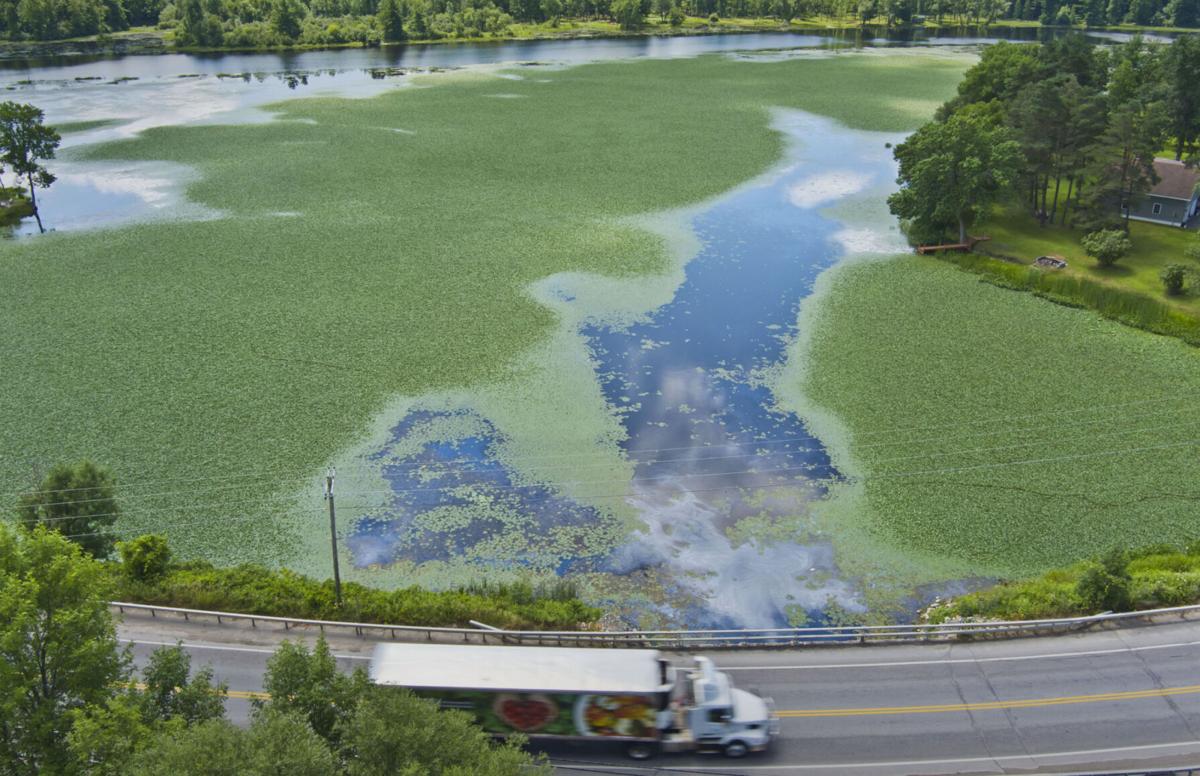 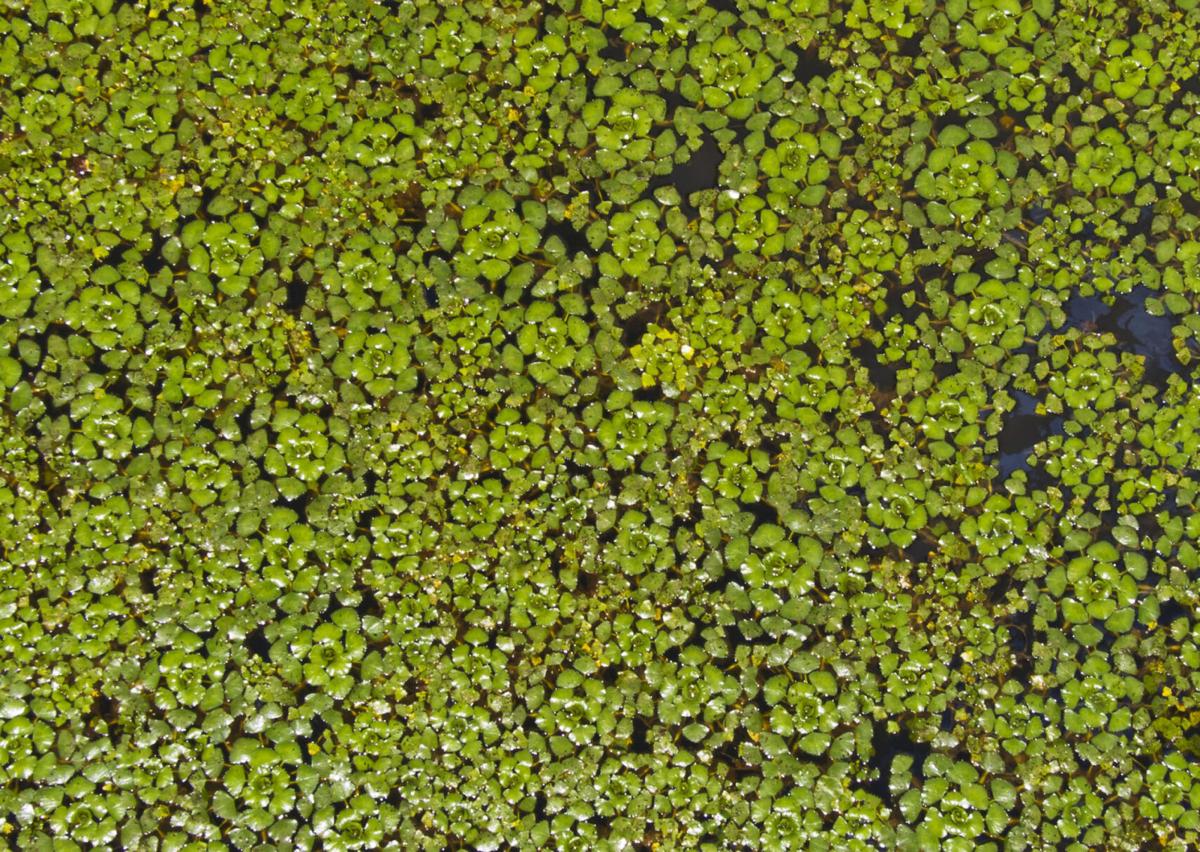 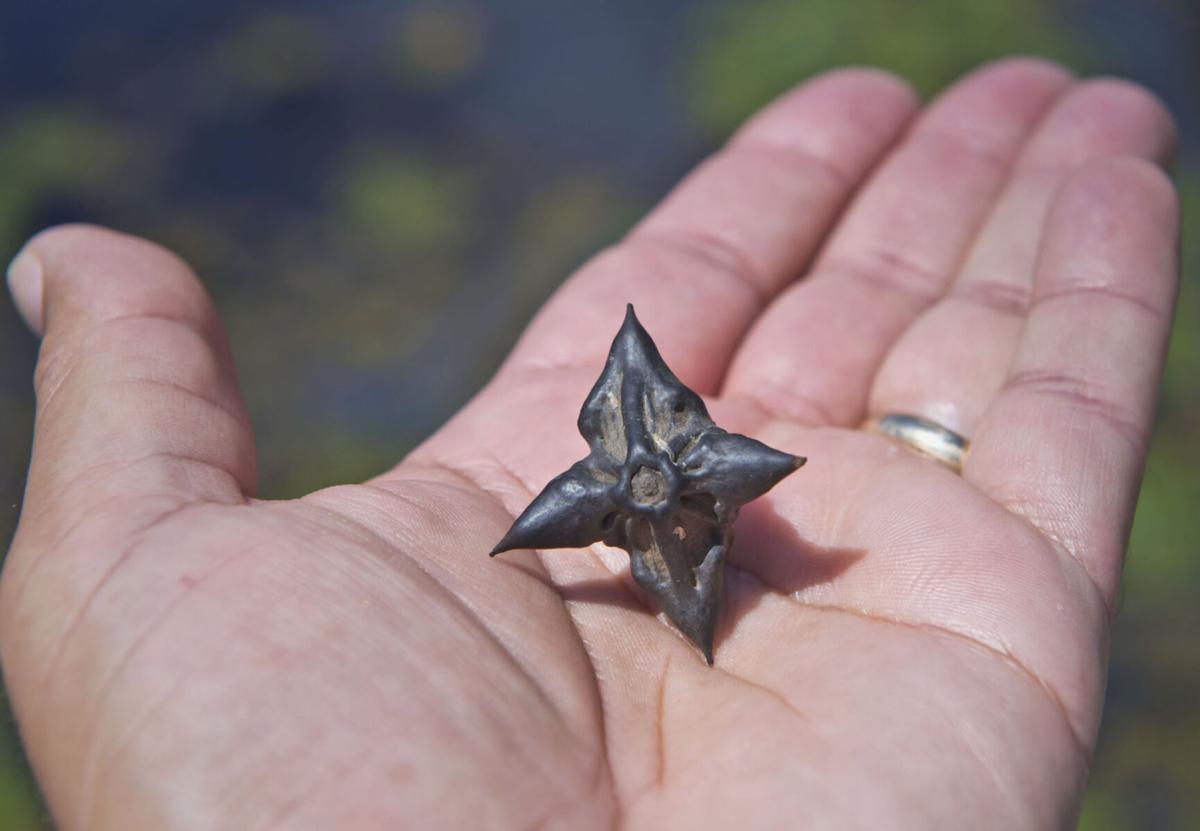 Water chestnuts spread naturally by sharp fruits detaching from stems and floating to other areas. Cleaning, draining and drying watercraft and other recreational equipment is an essential process to prevent additional spread. Christopher Lenney/Watertown Daily Times 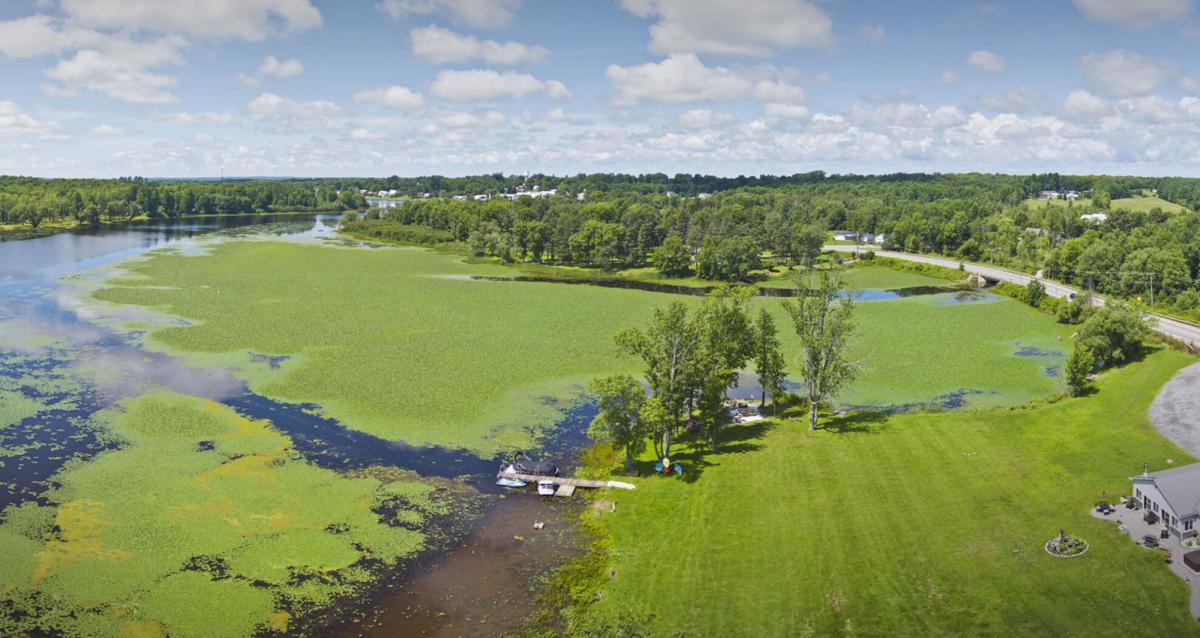 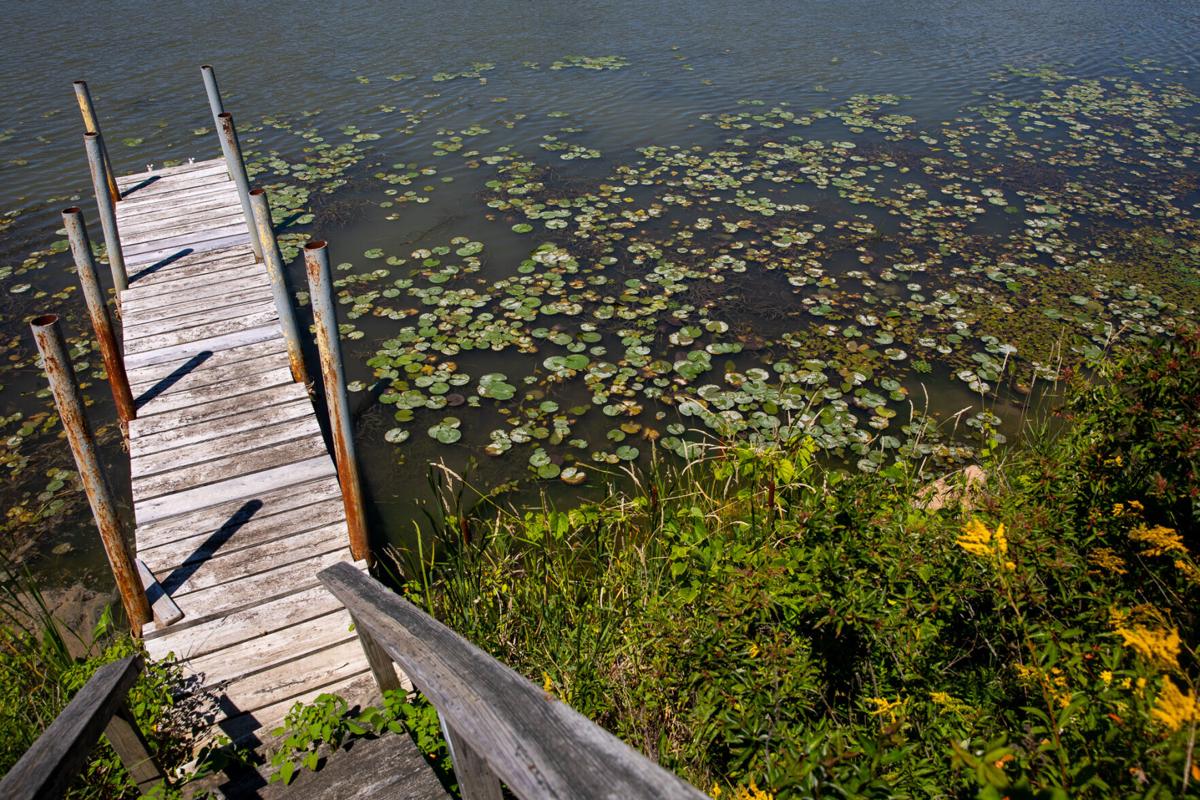 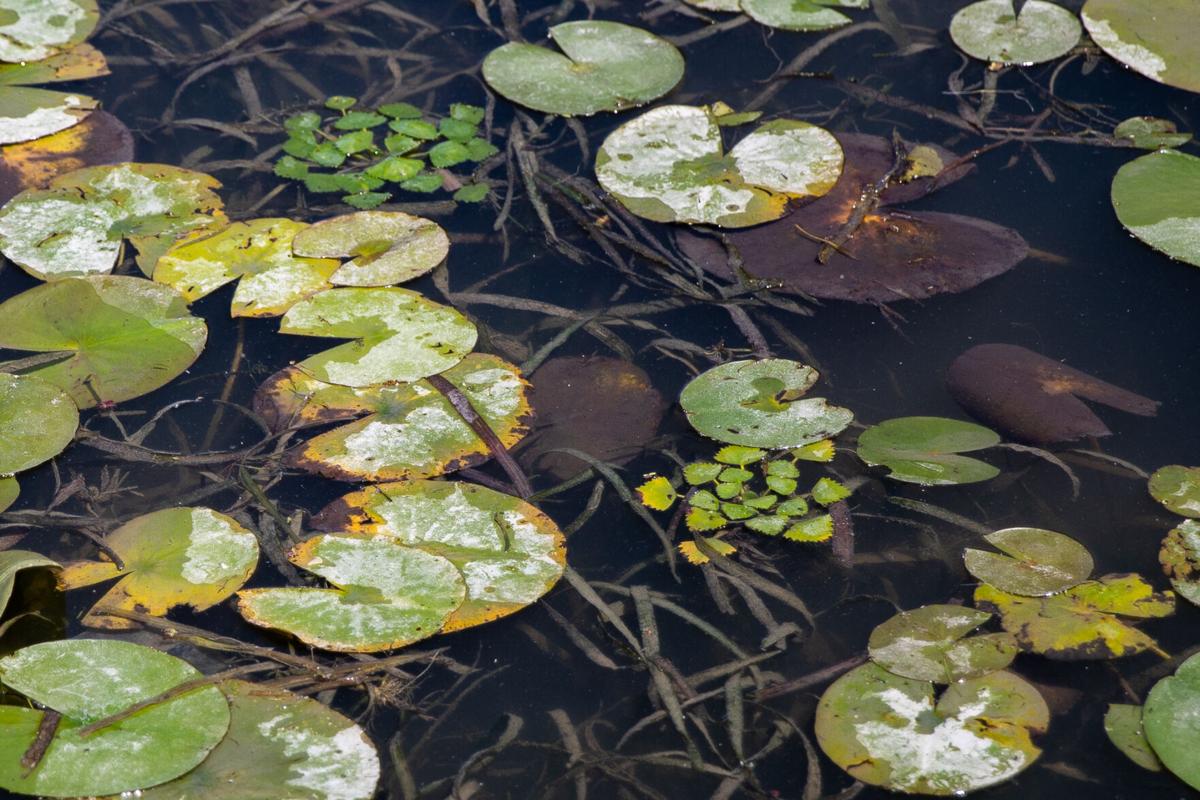 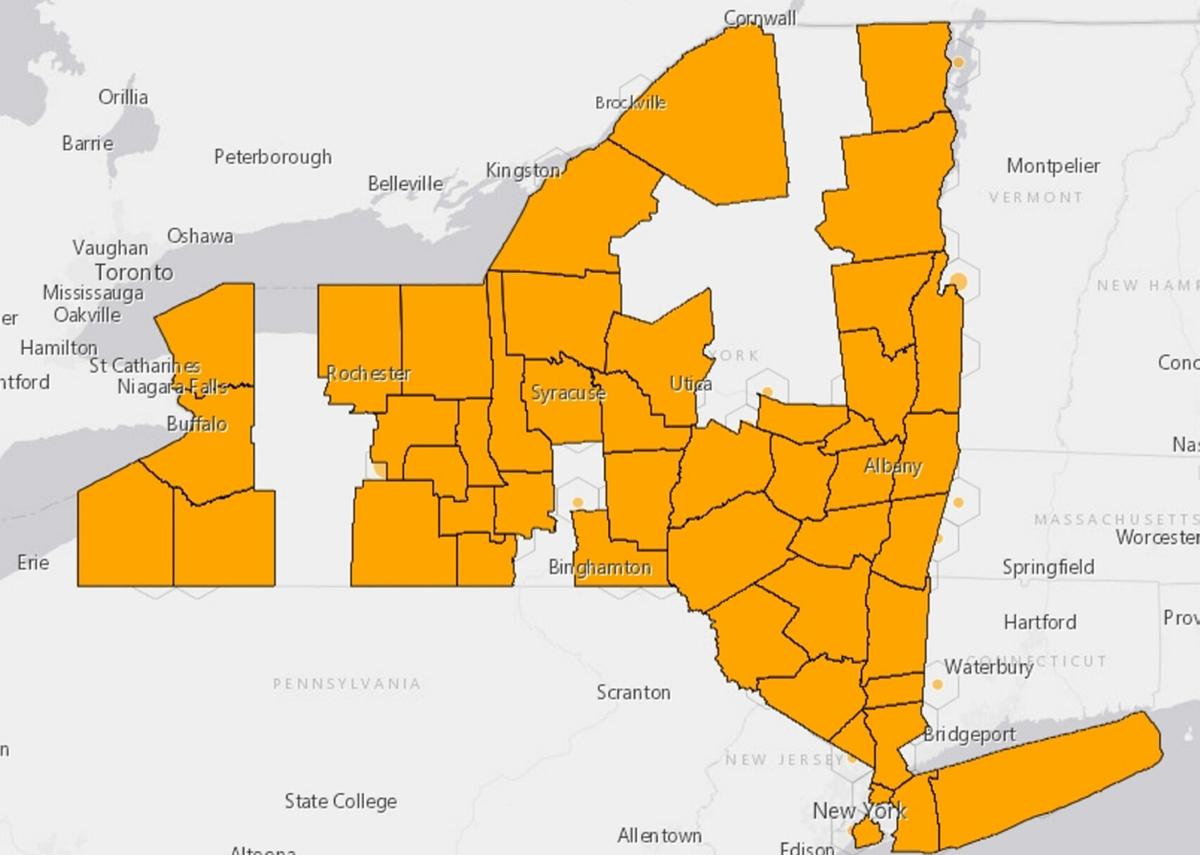 Observations of the invasive water chestnut have been confirmed in more than 40 of New York’s 62 counties, roughly depicted based on distribution, as of July. iMapInvasives database map 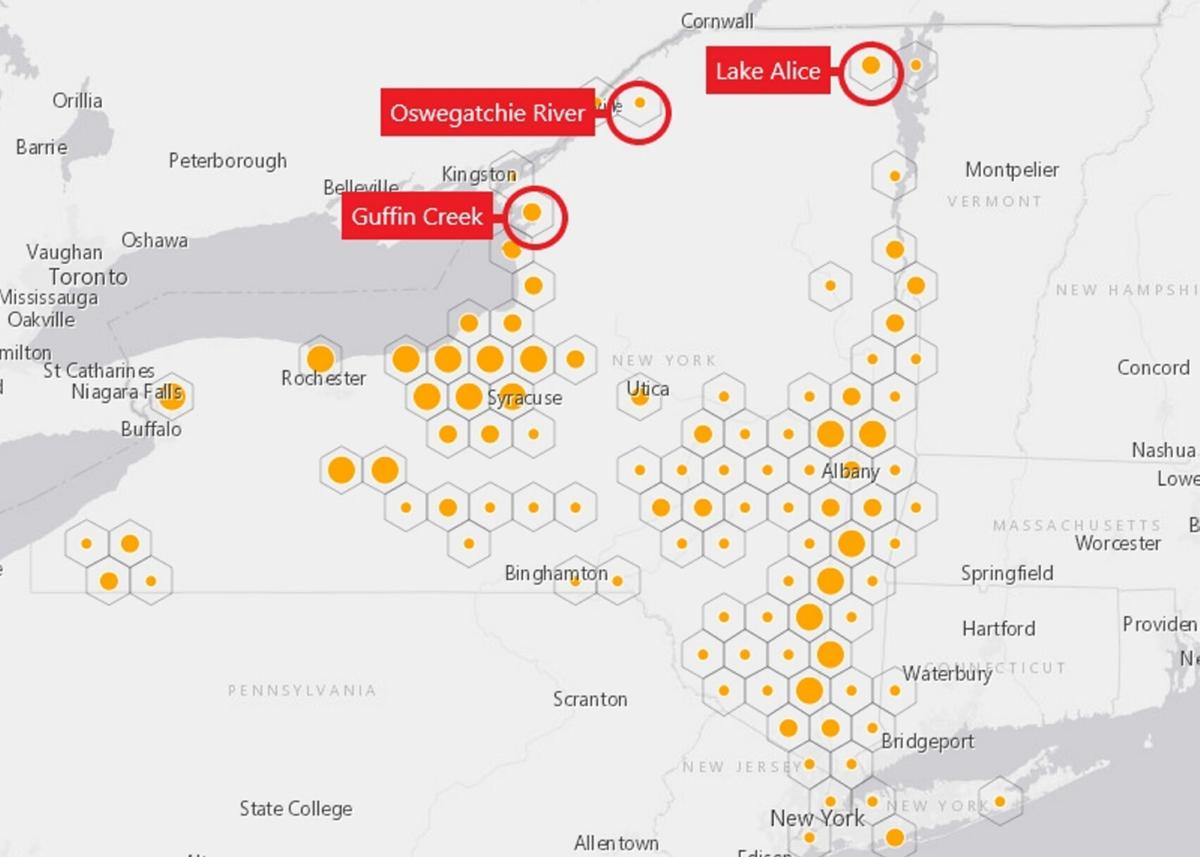 Confirmed observations of the invasive water chestnut submitted to the New York Invasive Species Database as of July. Circled are prominent north country sites, on Guffin Creek in Jefferson County, on the Oswegatchie River in St. Lawrence County and on Lake Alice in Clinton County. iMapInvasives database map 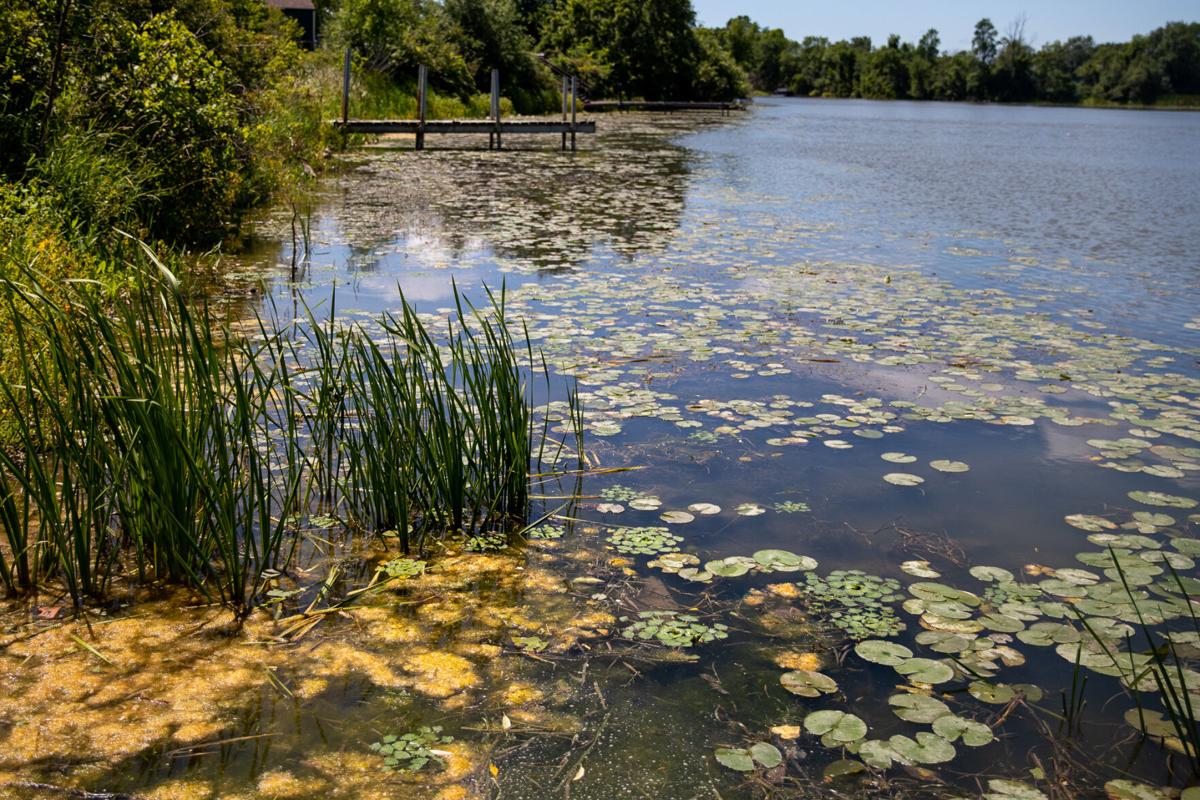 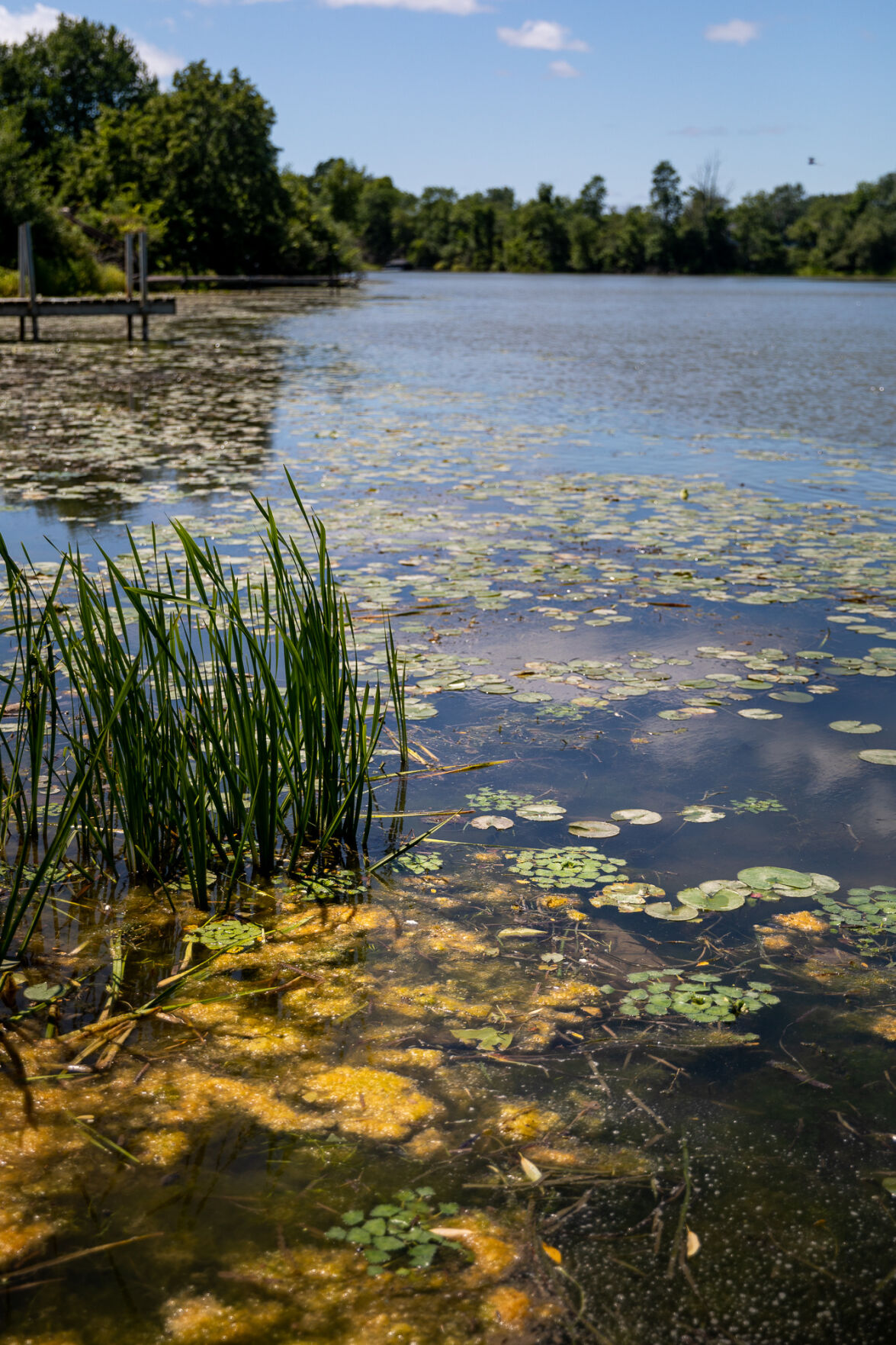 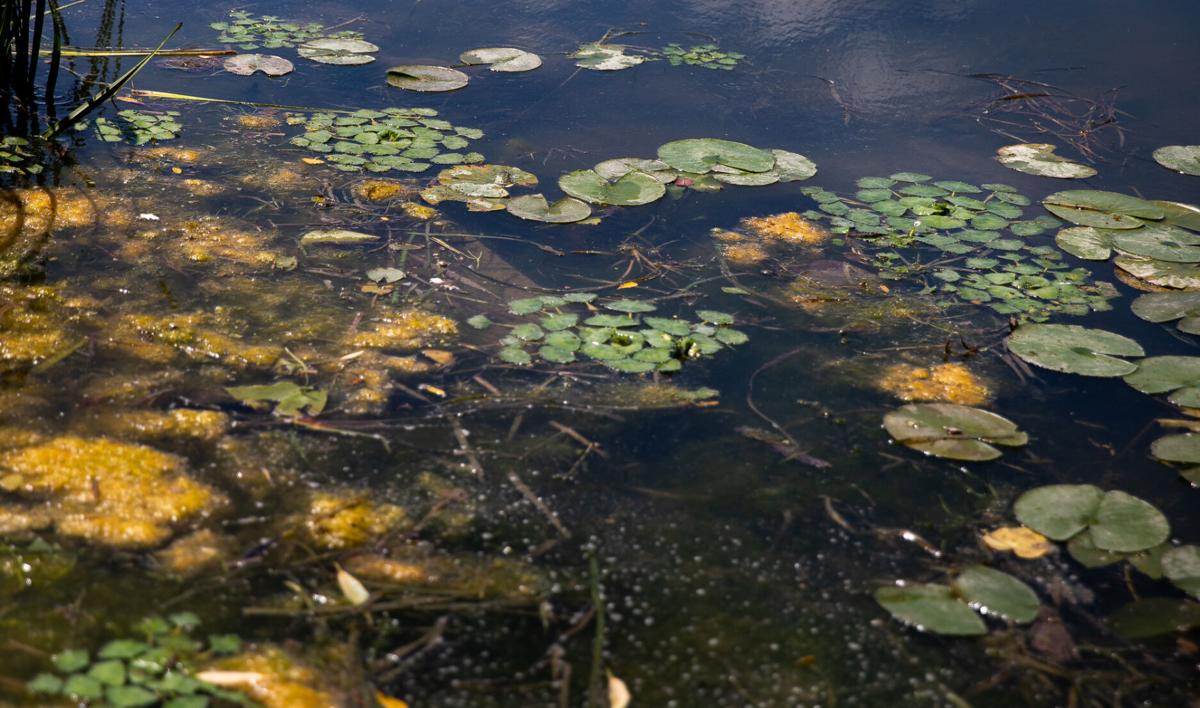 Water chestnuts spread naturally by sharp fruits detaching from stems and floating to other areas. Cleaning, draining and drying watercraft and other recreational equipment is an essential process to prevent additional spread. Christopher Lenney/Watertown Daily Times

Observations of the invasive water chestnut have been confirmed in more than 40 of New York’s 62 counties, roughly depicted based on distribution, as of July. iMapInvasives database map

HEUVELTON — Along County Route 15 just east of the village, the Oswegatchie River is blanketed by green water chestnuts.

Different from the grass-like water chestnuts that produce crisp corms featured in Asian cuisines, the invasive Trapa natans species is a legacy of an intentional introduction to North America nearly 200 years ago. Though they carry the same common name, the two species are from distinct orders and are only related by three of the broadest biological classifications.

Native to Europe, Asia and Africa, where native insects are natural controls, the invasive water chestnut was cultivated in North America in the late 1800s as an ornamental plant. Biologists have traced its arrival to Massachusetts around 1877, when Trapa natans was grown in ponds at Harvard University’s Cambridge Botanic Gardens.

A decade later, the plant had made its way to Collins Lake, just north of Schenectady. Its New York reach now stretches from Long Island, inland to the Hudson River Valley and up to Lake Champlain. The species is found throughout the Finger Lakes, and threatens aquatic ecology and recreation safety in more than 40 of the state’s 62 counties.

The Oswegatchie River site is one of three prominent annual growths known in the north country. The water chestnut prefers slow-moving waters and maintains a presence on Guffin Creek in Jefferson County and on Lake Alice in Clinton County. Farther south, Oswego County has a long history of suppressing the water chestnut on the Oswego River, Salmon River and Oneida Lake.

Submitted by a paddler, the 2019 report indicated one large clump roughly 20 feet in diameter and a few smaller clumps all about a mile upstream from the Heuvelton Dam. Individual plants and sparse groupings have been confirmed by locals on the Oswegatchie since as early as 2014, when the surface cover was estimated to be less than 5%.

That cover figure increased to an estimated 25% to 50% in August 2020, and additional reports at the time noted a “much larger distribution than last year.”

By Oct. 28, 2020, SLELO PRISM filed an iMapInvasives report when staff observed a dense population of water chestnut on the north side of the river near Lisbon Creek and scattered clumps in the rest of the area. Cover increased to 85% in some spots.

Water chestnut seeds germinate in spring and produce about a dozen stems, each with feathery leaves submerged in the water and triangular leaves with jagged edges on the surface usually by July. The surface leaves are attached to the stems by buoyant, bladder-like stalks that allow them to float in a rosette formation.

Greenish brown fruits — the “chestnuts” — emerge from each rosette every summer with sharp spines, and sink to the river or lake bed over the winter months, protecting the seeds inside. Old and non-viable fruits are darker, almost black, and sometimes rest in shallow waters or wash ashore for unexpecting people to step on.

Eight regional PRISMS in the state operate under host organizations to develop invasive species surveillance programs and management strategies based on priorities specific to each region.

Ms. Pistolese serves as education and outreach coordinator for SLELO PRISM, which is hosted by The Nature Conservancy and leads efforts in Oneida, Oswego, Jefferson, Lewis and St. Lawrence counties.

For PRISM management, invasive species are organized in a five-tier system. Tier 1 Prevention species are not yet confirmed in the region, but they’re close; Tier 2 Eradication species are present at low abundance and may be feasibly eliminated; Tier 3 Suppression species are too widespread for eradication; Tier 4 Localized Control species warrant protections for certain resources; and Tier 5 Monitor species require more research to understand.

The water chestnut is listed as a Tier 3 species, with Japanese knotweed, stiltgrass, Tree of Heaven and rusty crayfish, among others considered too prolific to eradicate. Those species have not yet reached Tier 4 status in the region, like the emerald ash borer that devastates ash trees, or the Eurasian milfoil that clogs St. Lawrence County’s Black Lake.

Regional and local agencies work with the state Department of Environmental Conservation to control the water chestnut population with chemical herbicides and a combination of mechanical harvesting and hand-pulling. SLELO PRISM’s efforts to pull individual plants are ongoing. Complete pulling is imperative, ideally after the fruits are produced in June but before they ripen in August. Straggling partial plants and remnant fruits can easily drift and propagate in new sections of the same water body.

Ms. Pistolese estimates 35,000 pounds of water chestnuts are removed by hand in the region every year. But keeping up with pervasive crops, like the blankets visible from roadways through Heuvelton, isn’t practical.

“It’s too large to be taken care of by hand,” Ms. Pistolese said.

Large-scale tactics include mechanical harvesting — essentially an aquatic mower — and herbicide application. Those approaches are expensive long-term and require careful consideration of how the “solution” itself impacts the ecosystem.

From the 1980s until 2011, for example, New York and Vermont worked with The Nature Conservancy, the U.S. Army Corps of Engineers and several other federal agencies to manage Lake Champlain’s water chestnut population. They collectively spent more than $9 million over that period, according to the New York PRISM network.

More recently, Cornell University researchers have started to explore biological controls as economically and environmentally viable options. One contender is a genus of leaf beetle that includes the common water lily beetle. Lab and field studies are looking into its suitability before the U.S. Department of Agriculture’s Animal and Plant Health Inspection Service can even consider a permit for release.

To avoid compounding the impacts of the water chestnut’s natural drifting tendencies, applying the state’s principles of prevention is crucial, too. The five-step DEC process — check, clean, drain, dry and disinfect — is designed to maximize aquatic invasive species risk management.

The procedure asks recreationists to check for and clean any visible mud, plants, fish or animals before transporting equipment to and from a boat launch. The DEC recommends fish and animals be returned to the body of water in which they were found and a regional DEC office or conservation organization be notified; transporting invasive aquatic species to another body of water is prohibited in New York. In fact, state law prohibits the launching of watercraft with any visible invasive species on or in the craft, unless a boater has been issued a special permit.

For mud and plants, the DEC recommends materials be discarded in an upland area near the launch or in an invasive species disposal station. Some north country launches have such stations, and others have decontamination stations boaters can use to wash their canoes, kayaks and large crafts. North country launches with decontamination stations are set up in Colton, Star Lake, Indian Lake and Long Lake.

Draining requires all water-holding compartments to be emptied, including ballast tanks and bilge areas, as well as live wells when possible. After drying everything that can reasonably be dried, boaters are encouraged to disinfect any equipment — ropes and nets, for example — that cannot be fully dried before reuse.

To contribute to the monitoring work for any invasive species, you can download iMapInvasives. The free app uses a mobile device’s camera and GPS capabilities, so it can collect information on a sighting even without a cellular connection. In New York, the Natural Heritage Program manages iMapInvasives. Suspected sightings can also be reported directly to a regional PRISM.

SLELO PRISM is hosting two water chestnut pulls this week to remove plants and survey their abundance. Bring a canoe or kayak to the Heuvelton Boat Launch at 9 a.m. Thursday, and Ms. Pistolese will lead volunteers along the Oswegatchie River downstream to Eel Weir State Park until about 1 p.m.

SLELO PRISM and Save the River staff are partnering to handle Guffin Creek from 9 a.m. to noon. Boaters will launch at Guffin Bay from Old Moffatt Road between the villages of Chaumont and Dexter.

Advanced registration is requested and can be completed on the events page of the SLELO PRISM website.