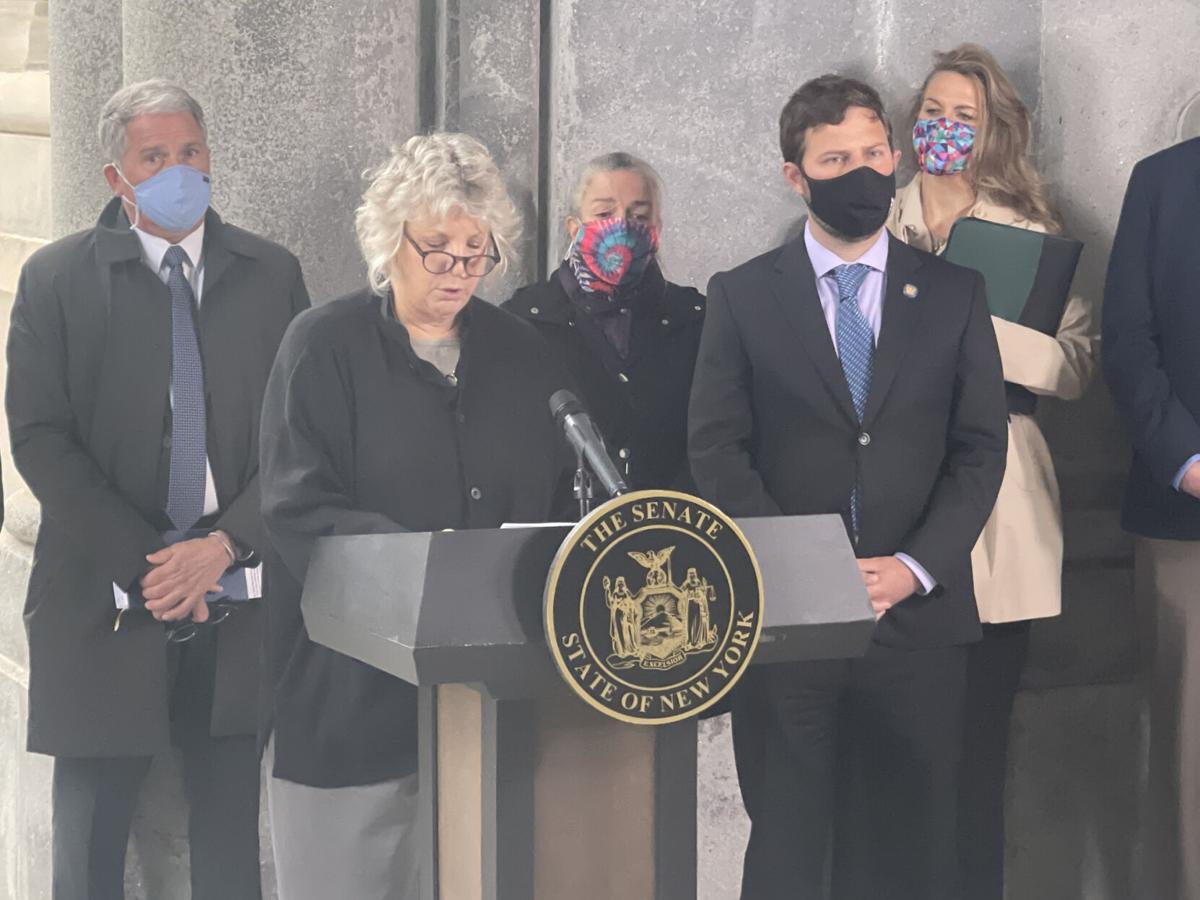 Assemblywoman Didi Barrett, D-Hudson/Poughkeepsie, speaks outside the state Capitol in Albany on Wednesday to introduce legislation to amend the state Constitution to include protections for mental health services. Sen. Elijah Reichlin-Melnick, right, sponsors the measure in the Senate. Kate Lisa/Johnson Newspaper Corp. 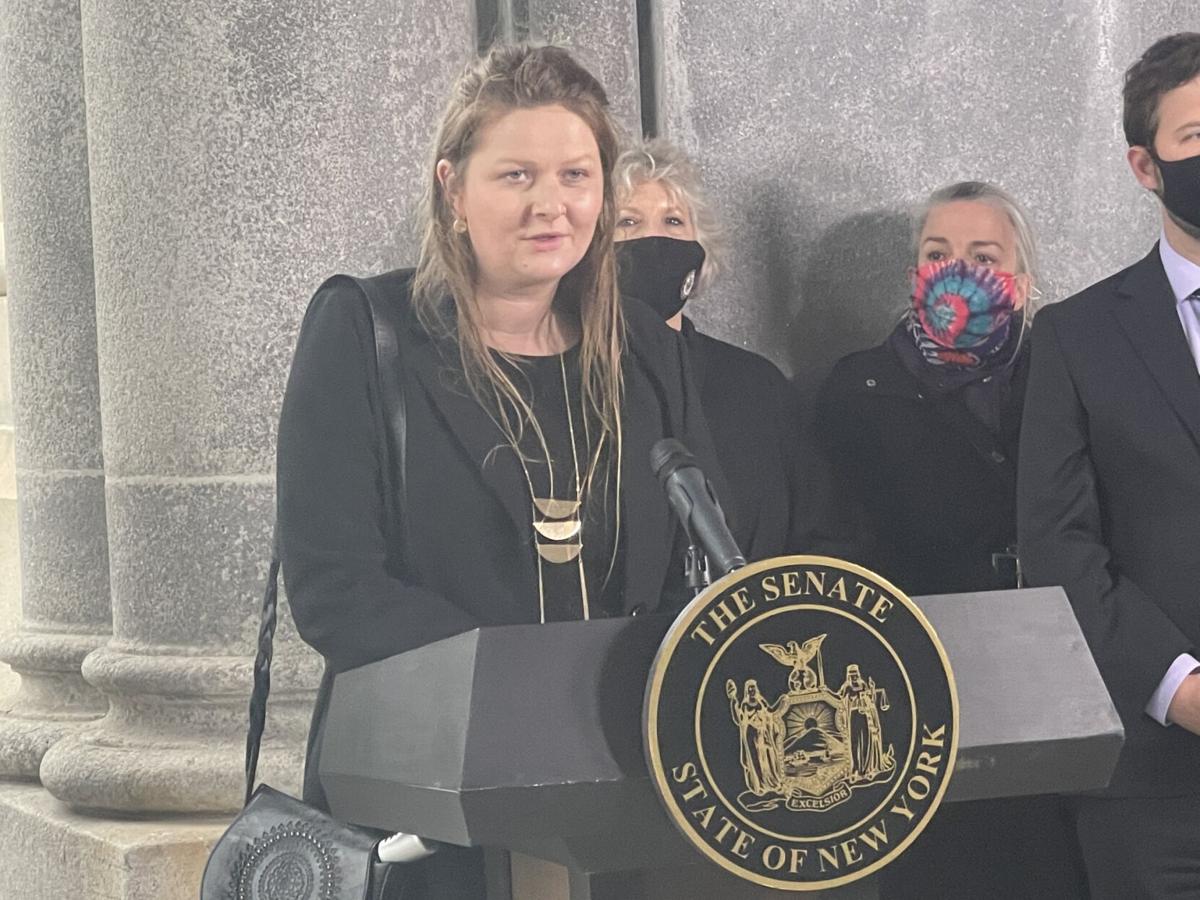 Joan Hunt, executive director of Greater Hudson Promise Neighborhood, speaks outside the state Capitol in Albany on Wednesday to advocate for the need to codify mental health protections in the state Constitution. Kate Lisa/Johnson Newspaper Corp. 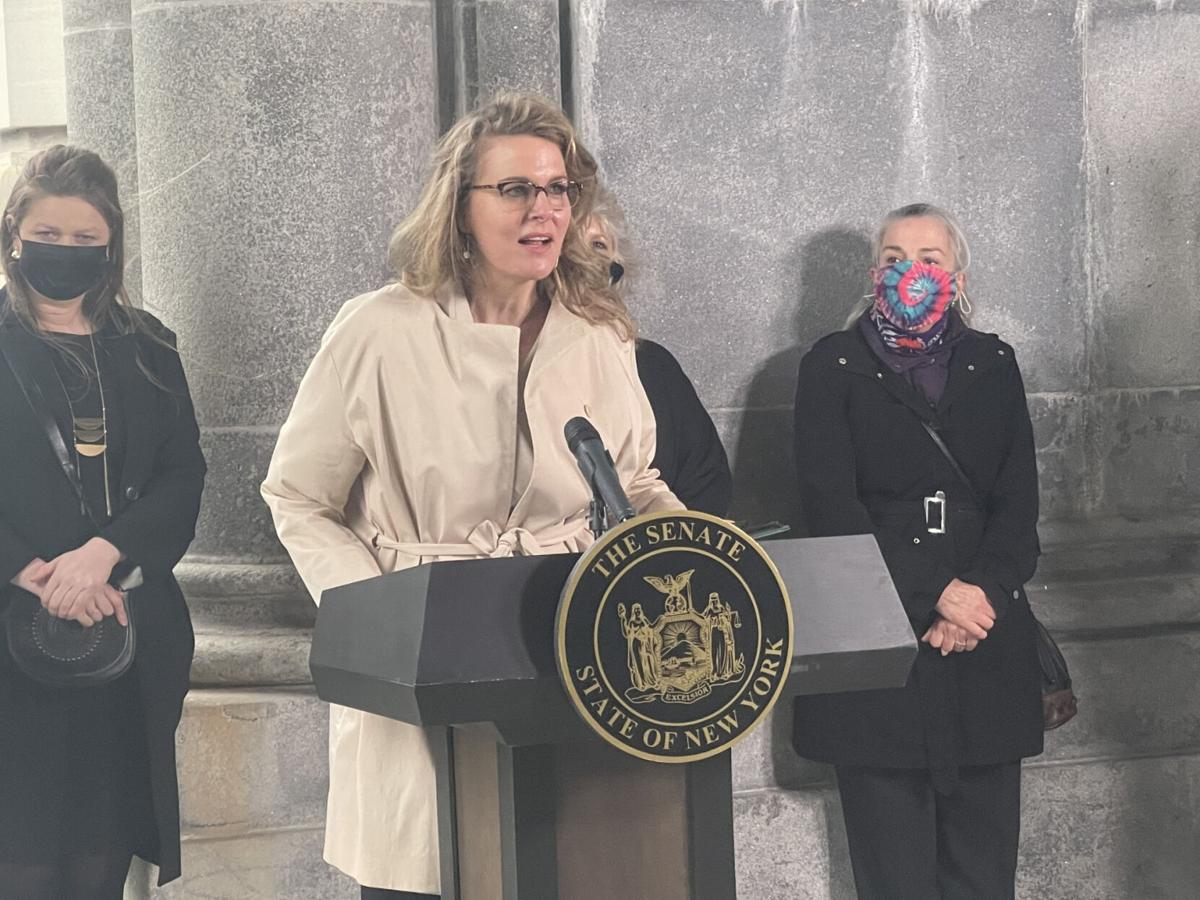 Assemblywoman Didi Barrett, D-Hudson/Poughkeepsie, speaks outside the state Capitol in Albany on Wednesday to introduce legislation to amend the state Constitution to include protections for mental health services. Sen. Elijah Reichlin-Melnick, right, sponsors the measure in the Senate. Kate Lisa/Johnson Newspaper Corp.

Joan Hunt, executive director of Greater Hudson Promise Neighborhood, speaks outside the state Capitol in Albany on Wednesday to advocate for the need to codify mental health protections in the state Constitution. Kate Lisa/Johnson Newspaper Corp.

ALBANY — With spikes in suicide rates, depression and substance abuse, lawmakers and health leaders are pushing to amend the state Constitution to include greater protections for mental health services to mimic the safeguards in place for other health care.

Assemblywoman Didi Barrett, D-Hudson/Poughkeepsie, and Sen. Elijah Reichlin-Melnick, D-New City, announced their bills outside the state Capitol steps to create parity between mental and physical health in the state Constitution. The new language requires both mental and physical health “will be matters of public concern,” and would codify the responsibility in state law.

Mental health has not been updated in New York’s Constitution since 1938. It currently states “protection of the mental health of the inhabitants of the state may be provided by state and local authorities.”

“Suggesting, of course, that it also may not,” Barrett said leading Wednesday’s event under the Capitol portico on State Street. “This long overdue amendment ... creates parity between physical and mental health, and in doing so, both recognizes the importance of mental health as a matter of public concern and it provides the constitutional commitment to support families and individuals who need to access mental or behavioral health services.”

The change is long overdue, officials said, but added mental health issues were highlighted and exacerbated during the coronavirus pandemic. Countries around the globe have reported heightened rates of anxiety and depression from prolonged isolation, suicide, eating disorders and substance abuse over the last 14 months.

“For far too long in the state of New York, there have been two different systems, two different schools of thought — a system of separate but equal, so to speak, in treatments that create stigma around mental health,” Reichlin-Melnick said, “and it has very real impacts on how mental health is administered in our state.”

Changing the Constitution to include mental health protections would require local governments and other organizations to prioritize mental health services in the future, and be less likely to cut those programs in times of financial hardship.

“There would be no health without mental health and well-being,” said Claire Parde, executive director of the Healthcare Consortium, which serves Columbia and Greene counties. “It is high time that our state policies stopped minimizing mental health and started enabling the mental health services and supports that have been so marginalized and under-resourced.”

People in rural communities often struggle to care for their mental health, causing their physical health to deteriorate and consumes health care resources, increasing costs to taxpayers. Residents in those areas also have limited access to adequate numbers of therapists, providers or telehealth services.

Legislators propose bills to codify the language into law, but the process will not be swift. An amendment to the state Constitution must be passed by two successive state Legislatures, or this session and next, before going to voters on Election Day in 2023. New Yorkers would be required to approve the amendment for the document to be changed.

Joan Hunt, who works with children and families in the city of Hudson as the director of Greater Hudson Promise Neighborhood, spoke of the disparity that exists for mental health services in low-income and minority communities.

“To some, this may seem like a language change, but I think language is so important and it really dries the way we think about those that we serve and those in our communities,” Hunt said. “Hopefully this is a huge shift in our state and how mental health services are viewed.”

About 17 veterans die by suicide each day in the United States.

“Suicide has reached crisis proportion in other diverse populations across our state as well from rural farmers to young people,” Barrett said, adding the rate is 40% higher in teenage Latina girls in ninth through 12th grades.

Half of all lifetime cases of mental illness begin in a person by age 14, and three-quarters begin by age 24, but people in the United States, on average, do not receive care for it until nine years after the condition first appears, Barrett said.

“A very simple fact: One can simply not have physical health without mental health — and it’s one that is very difficult to advance here in New York state,” Shapiro said. “Our Constitution is our foundation, and now we have an opportunity to build that foundation so that so people bound by mental health challenges can get the help they need.”

How about starting in Albany.