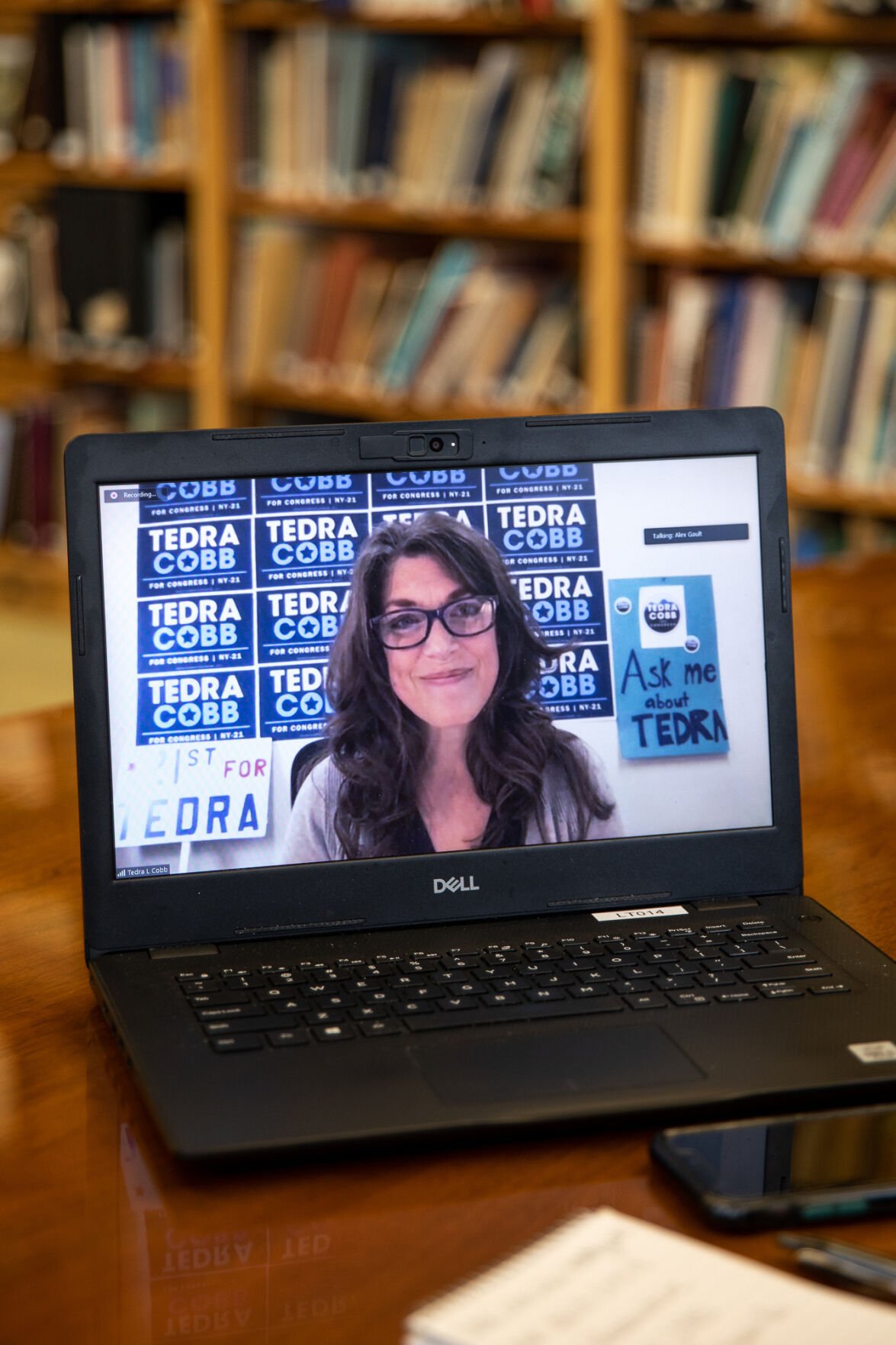 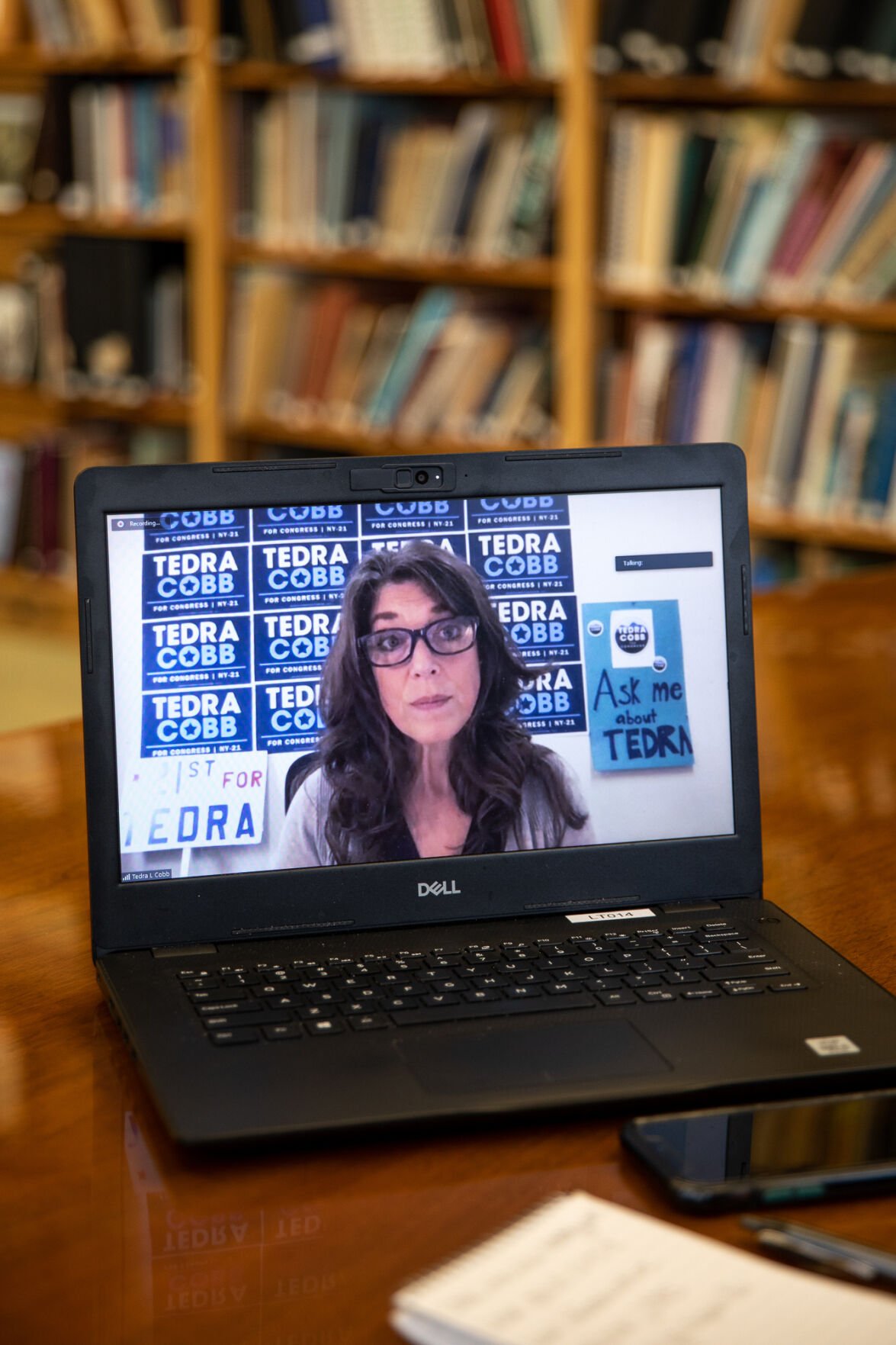 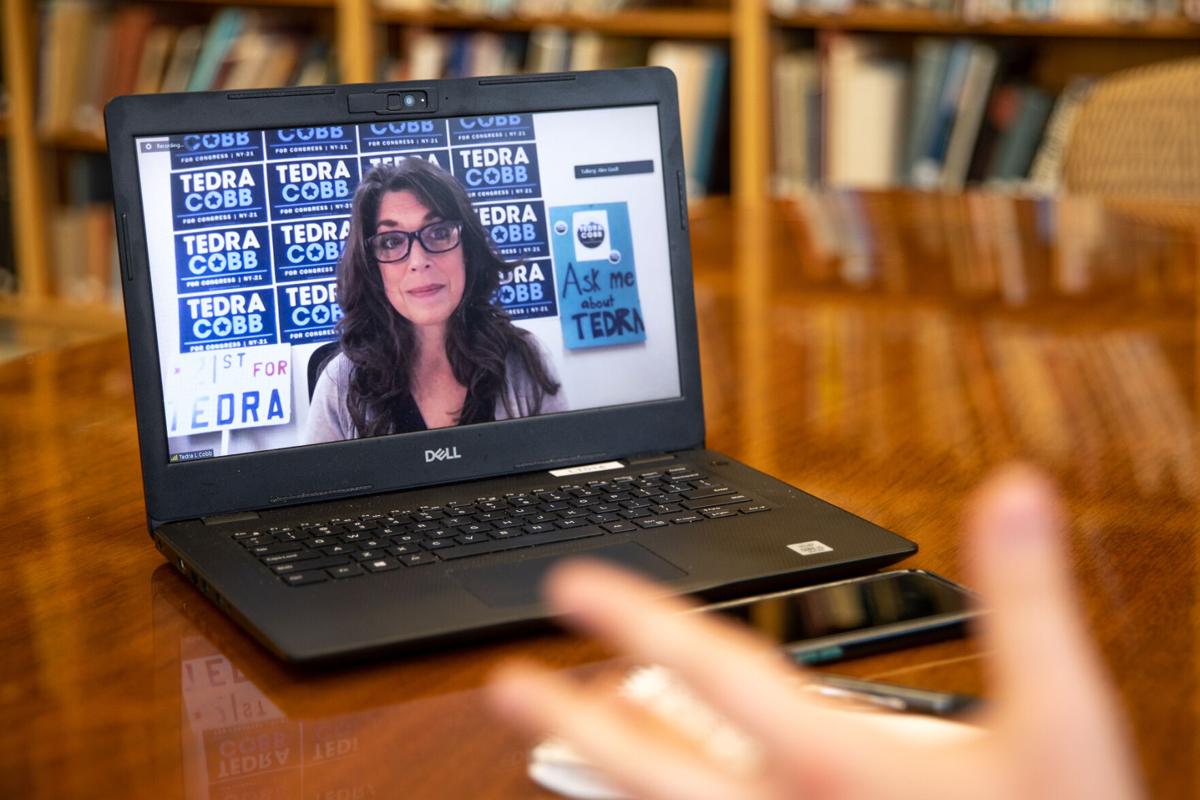 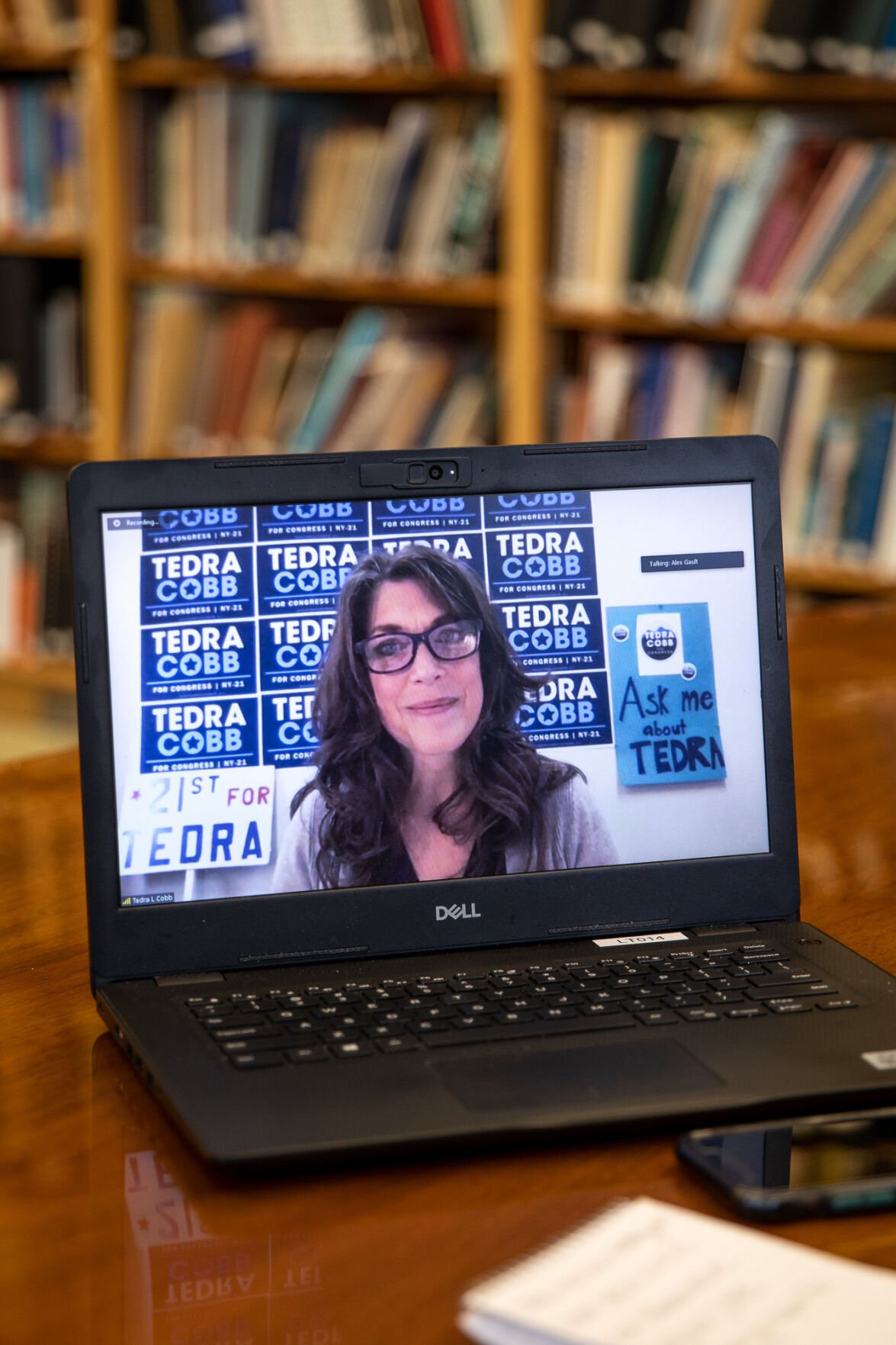 Stefanik focused on ‘record of results’ in run for re-election

WATERTOWN — Tedra L. Cobb, the Democratic candidate for the 21st Congressional District race, said healthcare is personal for her, and she continues to focus on that issue as she runs for the north country’s House seat a second time.

During an interview with the Watertown Daily Times editorial board Oct. 1, Ms. Cobb, 53, of Canton, said her personal experiences with her daughter’s health concerns, as well as her time as a St. Lawrence County legislator and her experience as the founder of the St. Lawrence Health Initiative, have given her the right perspective to lead on the topic of healthcare.

In 1999, Ms. Cobb was hired to help start the St. Lawrence Health Initiative, a nonprofit organization that develops resources and public education programs to encourage healthy living and connect people in need with healthcare. She became the executive director of the organization and has said she’s proud of the fact that under her tenure, the organization grew from a $19,000 one-time grant into a stable nonprofit with a budget of $800,000 per year.

In 2001, Ms. Cobb was elected to the St. Lawrence County Board of Legislature, eventually becoming vice chair of the board. Ms. Cobb left the Legislature after two terms in 2010.

“I had no expectation that I would ever run for office again,” Ms. Cobb said. “A career in politics was not what I expected.”

Ms. Cobb said she was spurred into running for office by a vote taken by the person she’s running to unseat, Rep. Elise M. Stefanik, R-Schuylerville.

“In 2017, Elise Stefanik voted again to repeal the Affordable Care Act and to kick 64,000 people off their health insurance,” Ms. Cobb said. “That is what made me decide to run.”

Rep. Stefanik has voted to pass multiple measures that would repeal the ACA. In 2017, Rep. Stefanik voted to pass the American Health Care Act, which would have repealed the ACA as it implemented its own regulations. That measure stalled in the Senate.

Ms. Cobb said the 2017 American Health Care Act would have stripped away protections for people with pre-existing conditions and could have caused health insurance premiums to skyrocket. She said she was particularly worried about those issues because of her daughter Aida’s medical condition and her own experiences with the health insurance system.

In 2015, her daughter Aida was diagnosed with degenerative disc disease, Ms. Cobb said. According to the Mayo Clinic, this disease occurs when the soft disks between vertebrae begin to dry out and shrink, which can cause pain, weakness or numbness.

“Basically, she lost the ability to walk or stand, and she needed an emergency back surgery. As you can imagine, it was terrifying, but we were lucky because I had a job that provided insurance, so she got the surgery she needed. A month later, in 2016, I lost my job, and my family lost our insurance.”

Ms. Cobb said she’s far from the only person who’s concerned about healthcare and what a repeal of the ACA might mean for her and her family. She said that in the 2.5 million voter outreach calls her campaign has made since April, healthcare is the single most common issue they hear about.

“Healthcare is the number one issue,” she said. “At first, with COVID, it was the general cost of healthcare and the fear of losing it. Now, that’s expanded to access to healthcare, it’s about hospitals closing and access to mental healthcare.”

Ms. Cobb’s position on healthcare has changed since she last ran for office in 2018. Then, she supported a Medicare for All plan, but in February of this year the Glens Falls Post-Star reported Ms. Cobb told supporters she had heard from doctors across the district and changed her opinions.

“Recently I met with doctors, there wasn’t a consensus in the medical community,” Ms. Cobb told the Post-Star. “Doctors like Medicare, the concern is whether they’ll be reimbursed.”

Now, Ms. Cobb says she supports a Medicare public option, where people can buy into the Medicare system if they want, or stay on their own private, employer-provided plan.

“I think we need a Medicare public option,” she said. “We’re seeing, of course, with COVID people have lost their jobs and are trying to sign up on the ACA. That is where people are being driven, because they’re losing their jobs and their healthcare.”

Ms. Cobb said there are a number of other regional issues that tie into healthcare, including the ongoing opioid epidemic. She again criticized Rep. Stefanik’s voting record on the issue during a Zoom interview Thursday afternoon. “There was a bill that Elise Stefanik voted against, which was for health navigators,” Ms. Cobb said. “Basically, they’re professionals who understand addiction treatment, and they understand navigating the treatment system and how to get into treatment. Elise Stefanik voted against that, and I would have definitely supported that.”

Ms. Cobb again invoked her personal experiences on the issue. She talked about her brother’s struggles with addiction, and the barriers that her family faced in getting him into addiction treatment services.

Ms. Cobb said there needs to be federal support for medically assisted addiction treatment, as well as a push to increase the amount of space in treatment programs.

Ms. Cobb said even infrastructure and broadband internet services now have an impact on healthcare. With the ongoing coronavirus pandemic, many people have come to rely on telehealth services for routine medical procedures.

“I have a brother with lupus, and every six months I drive him to Rochester for medical appointments, to see his specialist,” she said. “This was the first time he was actually able to see a specialist through a telemedicine interview, but he had high-speed internet.”

Ms. Cobb said she’s seen how many people, especially lower income people in rural communities, are locked out from these benefits and advances because broadband access has been slow to roll out in poorer, rural areas.

“When I left the legislature in 2010, we were told ... ‘The last mile is being built,’” she said. “It’s been six years that Elise Stefanik has been in Congress, and the last mile hasn’t been built.”

Ms. Cobb said physical infrastructure, like roads and bridges, is also in need of investment. Ms. Cobb talked about how she was once a volunteer firefighter in Pyrites, a hamlet southwest of Canton, along the Grasse River. She said when she was working in Pyrites, the volunteer fire department could cross the Bridge Street bridge to respond to a fire across the river in a matter of minutes. But for years, that bridge has been closed to traffic because it’s structurally deficient.

“That bridge has been out for several years, so now when there’s a fire on the other side of the river, it takes about 20 to 25 minutes to get around,” she said. “This is a safety issue. So infrastructure, whether it’s roads and bridges, high-speed internet, cell coverage, we are getting farther and farther behind.”

Ms. Cobb said infrastructure also ties into job creation and economic growth. She said she believes the jobs of the future are in creating green energy infrastructure, like solar wind energy farms, and in technological innovation firms.

Ms. Cobb said she sees a need to bring more young people into the region, as the average age grows older. According to censusreporter.org, the median age in the NY-21 Congressional district is 41, which is 10% higher than the national average.

“We are seeing that people are aging, and people’s businesses are falling behind and we’re losing jobs,” she said. “I think we need to be investing in education, investing in workforce development, whether it’s in high schools or through BOCES, or apprenticeship programs, or nursing training programs.”

Ms. Cobb said she would like to see an expansion in public service loan repayment programs, where a person’s student loans can be forgiven if they work for a period of time in any level of government, or in a nonprofit organization. She said those programs will help encourage young people just out of college to engage in public service, or work in jobs that can help better the community at large.

Ms. Cobb said she would also like to see more federal investment in weatherization programs, to bring older homes and buildings up to modern insulation and energy conservation standards.

“Our housing stock is getting older, and more of people’s income is going to heating, which is not good for the environment or for people’s paychecks,” she said. “There are also good jobs in weatherization, so it’s sort of a win-win.”

Why was "bringing local voice" not in quotes like the Stefanik title was, Jerry?

You would need to ask the copy editor, designer or news editor who was responsible for writing either or both of these headline.

The differences in the size of photos is due to the fact that this story is a candidate profile of Tedra Cobb. The accompanying photo you see of U.S. Rep. Elise Stefanik is a teaser to her online profile. And if you click of Rep. Stefanik’s candidate profile, you’ll notice that her photo is substantially larger than the photo used in the accompanying teaser for Cobb’s online profile.

Thank you for your input.

Hmmm, no mention of how she plans to pay for all this. No mention of her gun grab plan either, hmmm, who would have predicted that? Well at least not in public.