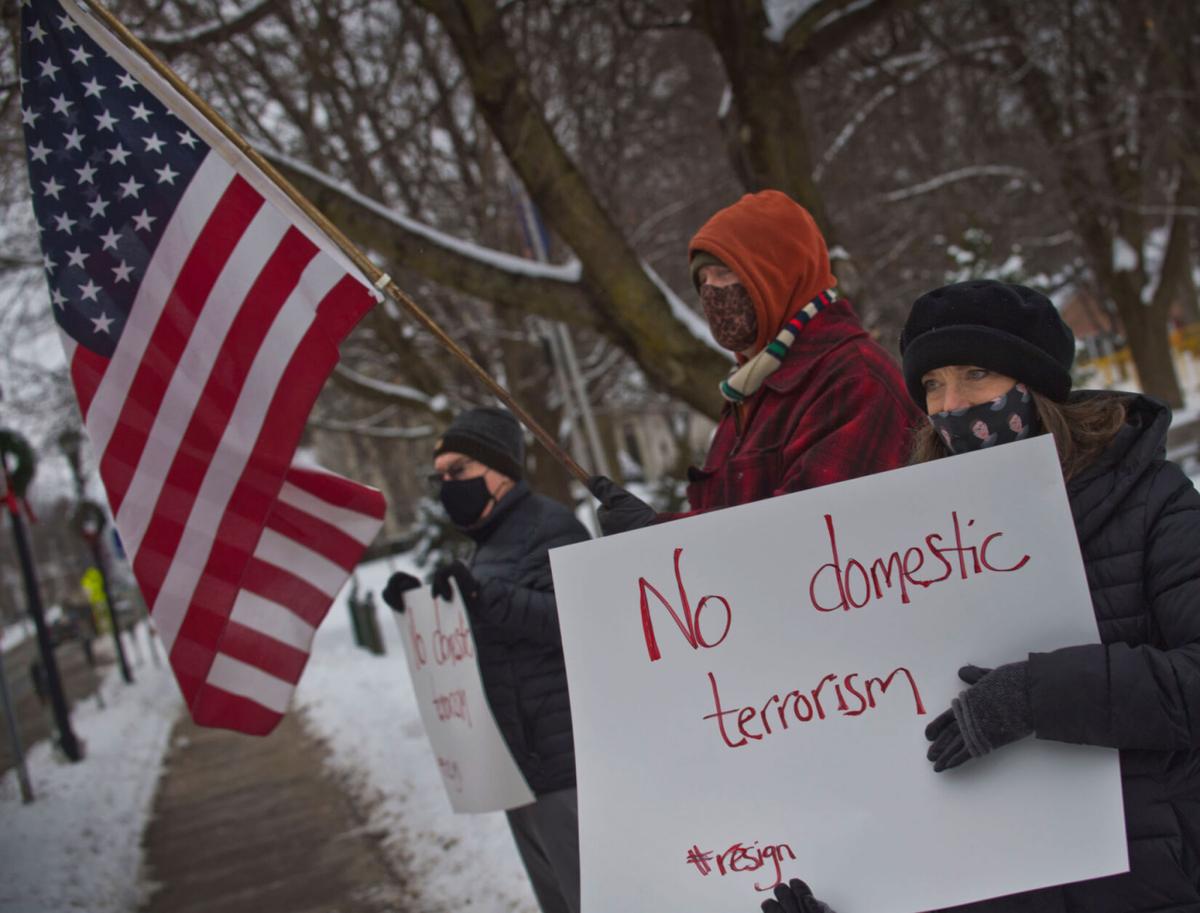 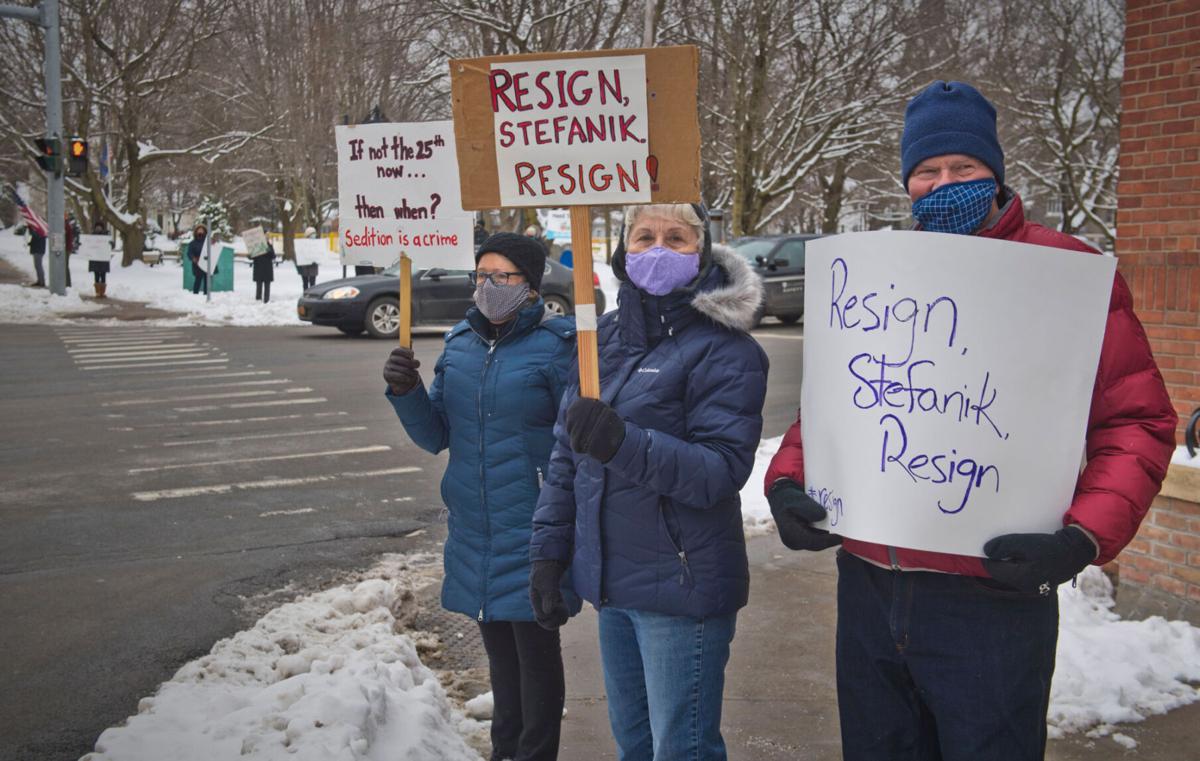 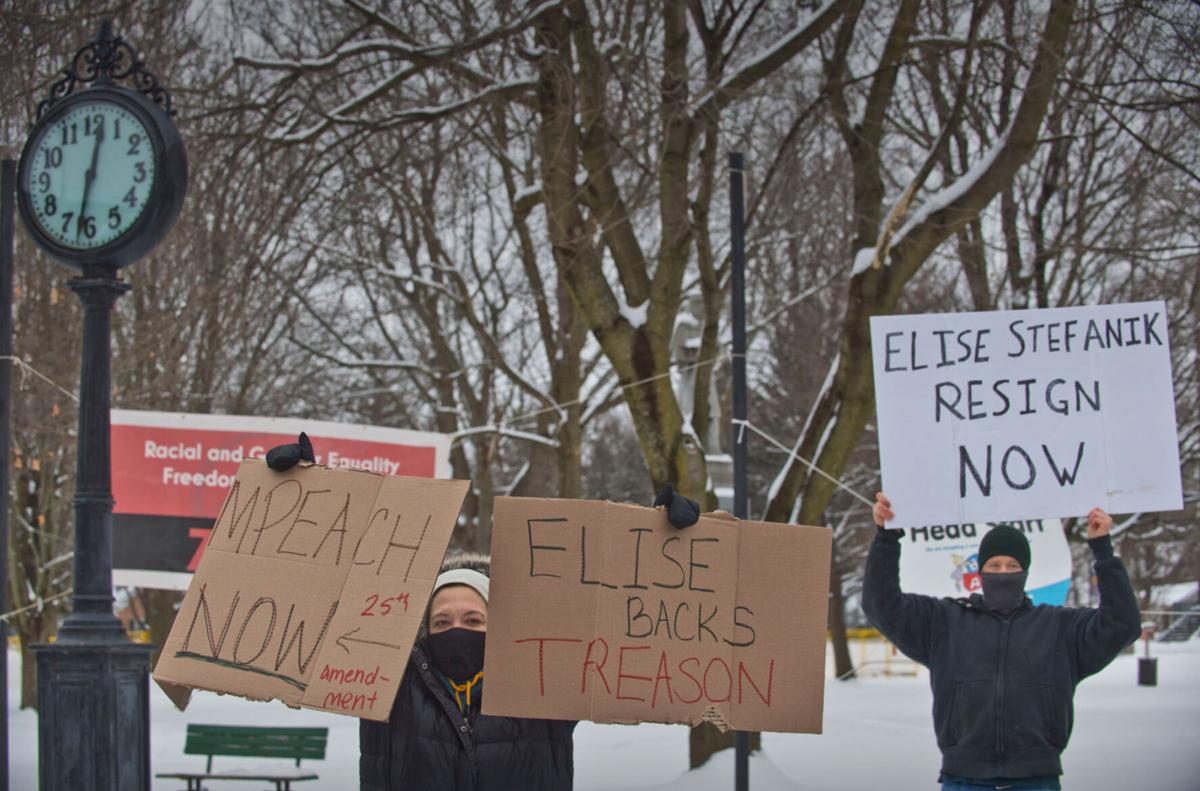 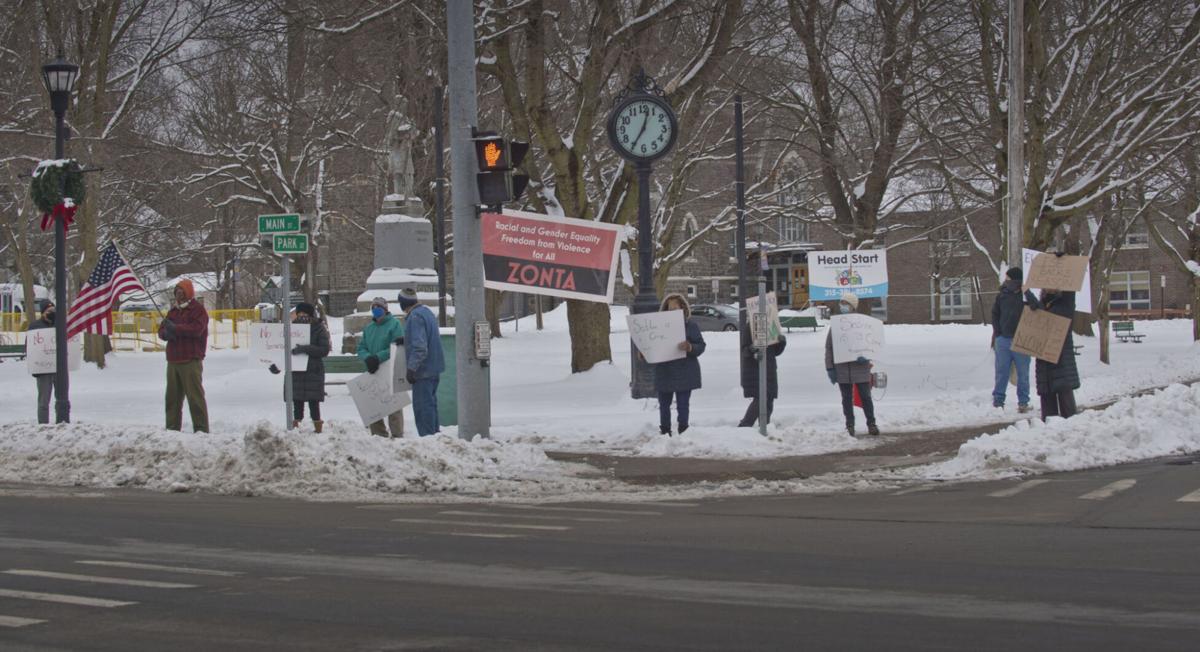 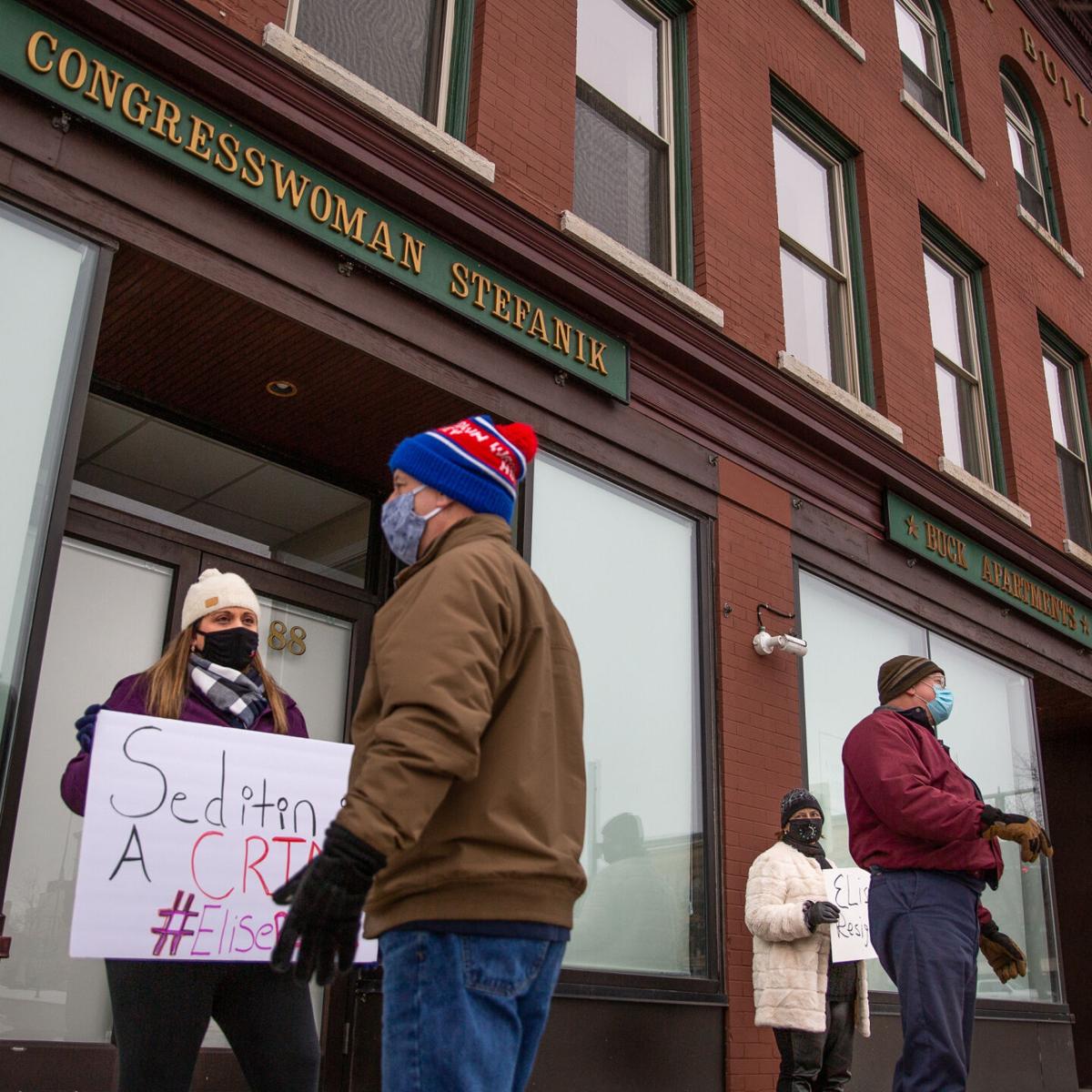 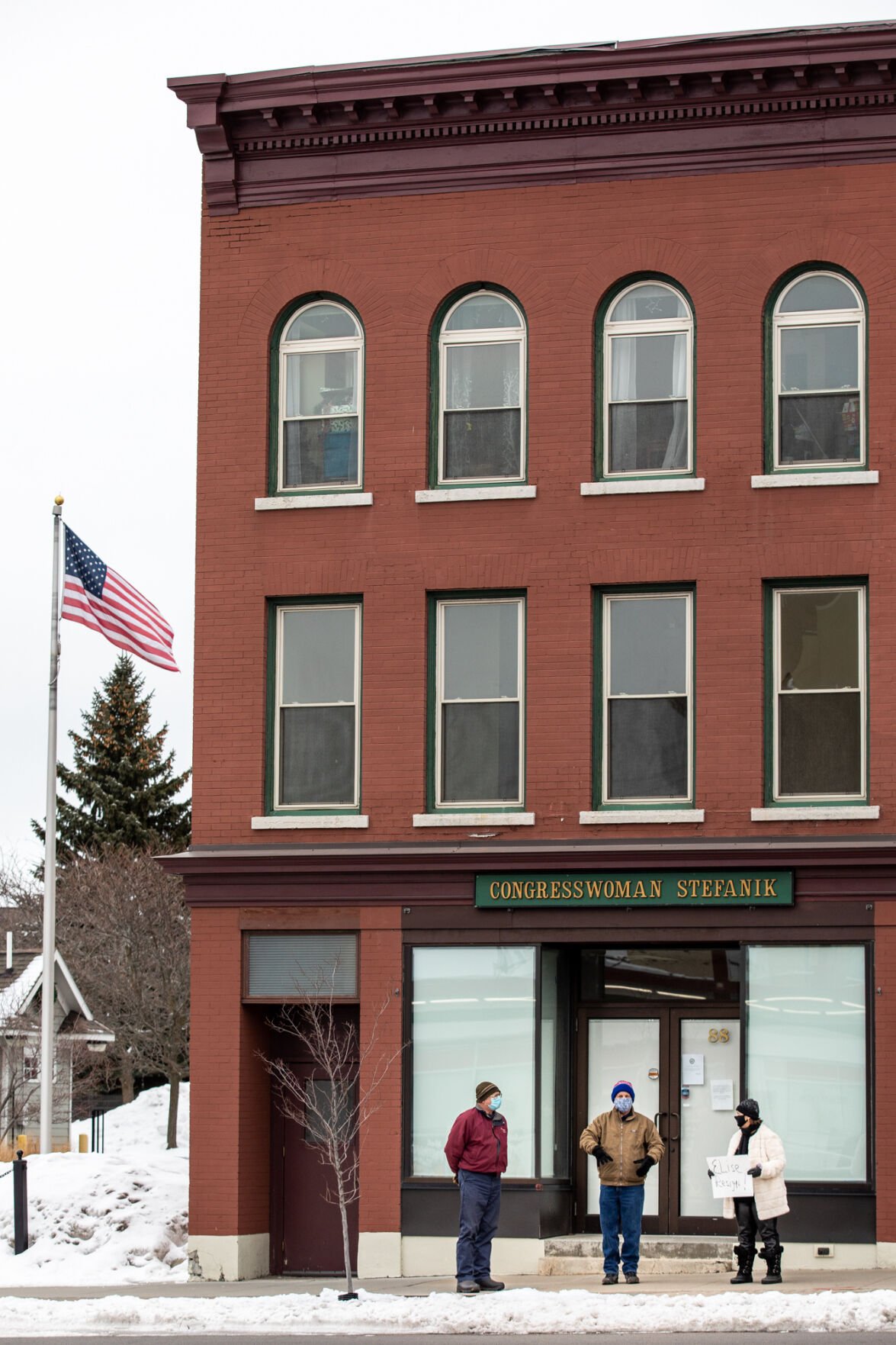 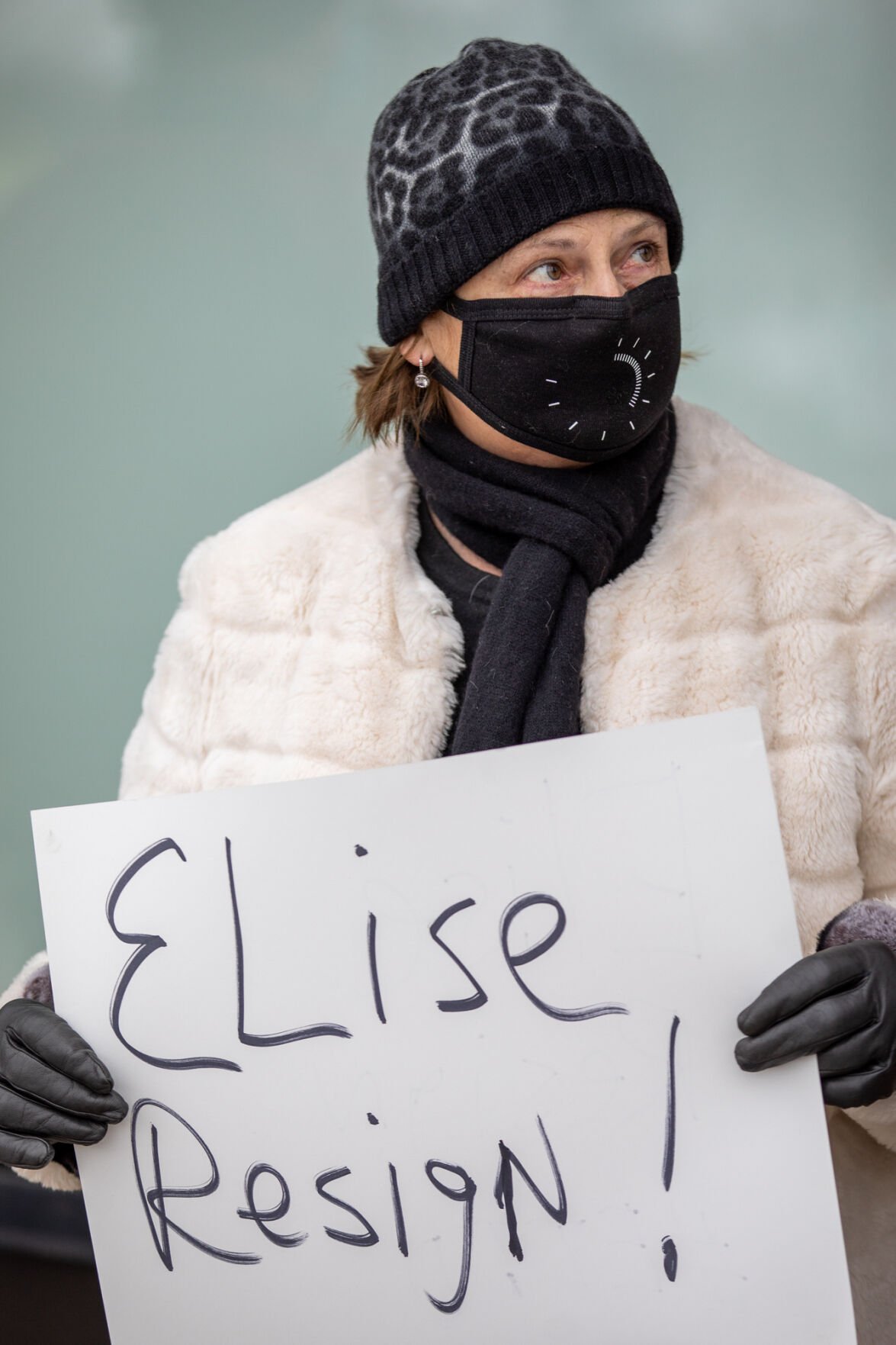 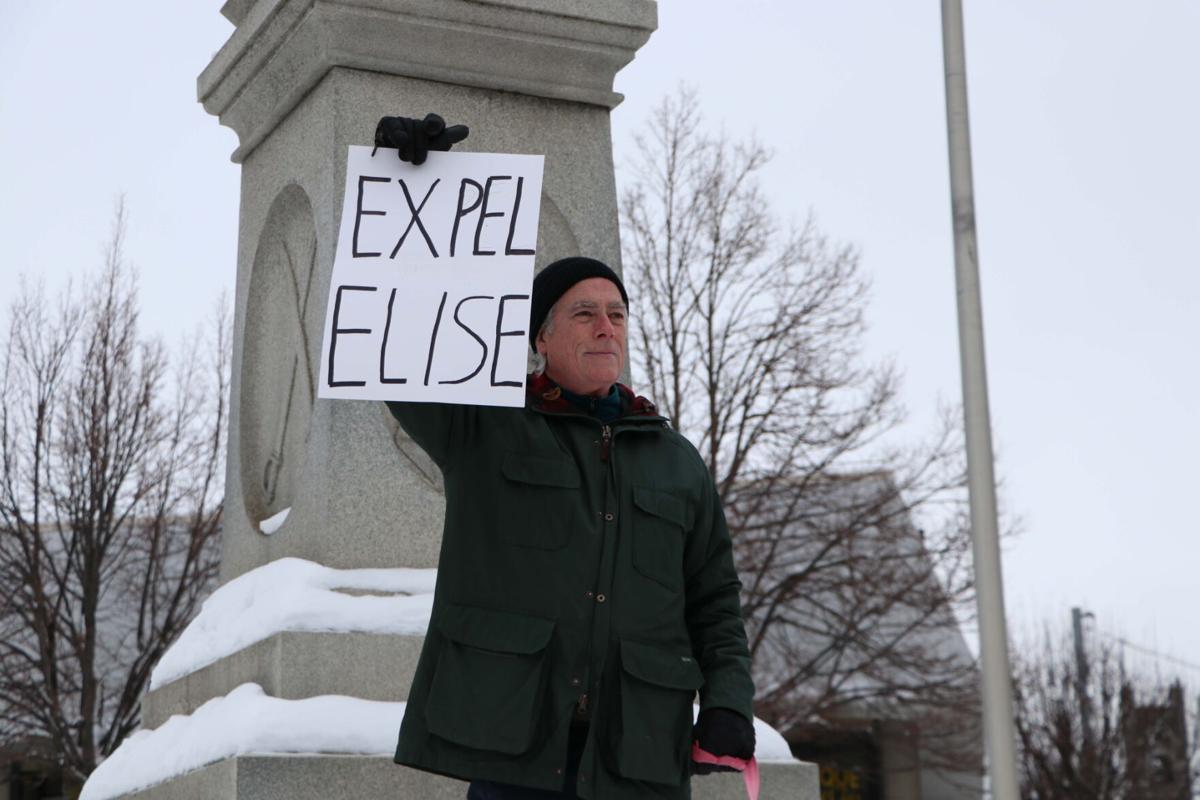 Malone resident Boyce Sherwin, 68, protests at the corner of Main and Elm streets in the village for the expulsion of Rep. Elise M. Stefanik, R-Schuylerville, from office. Evan Wheaton/Malone Telegram 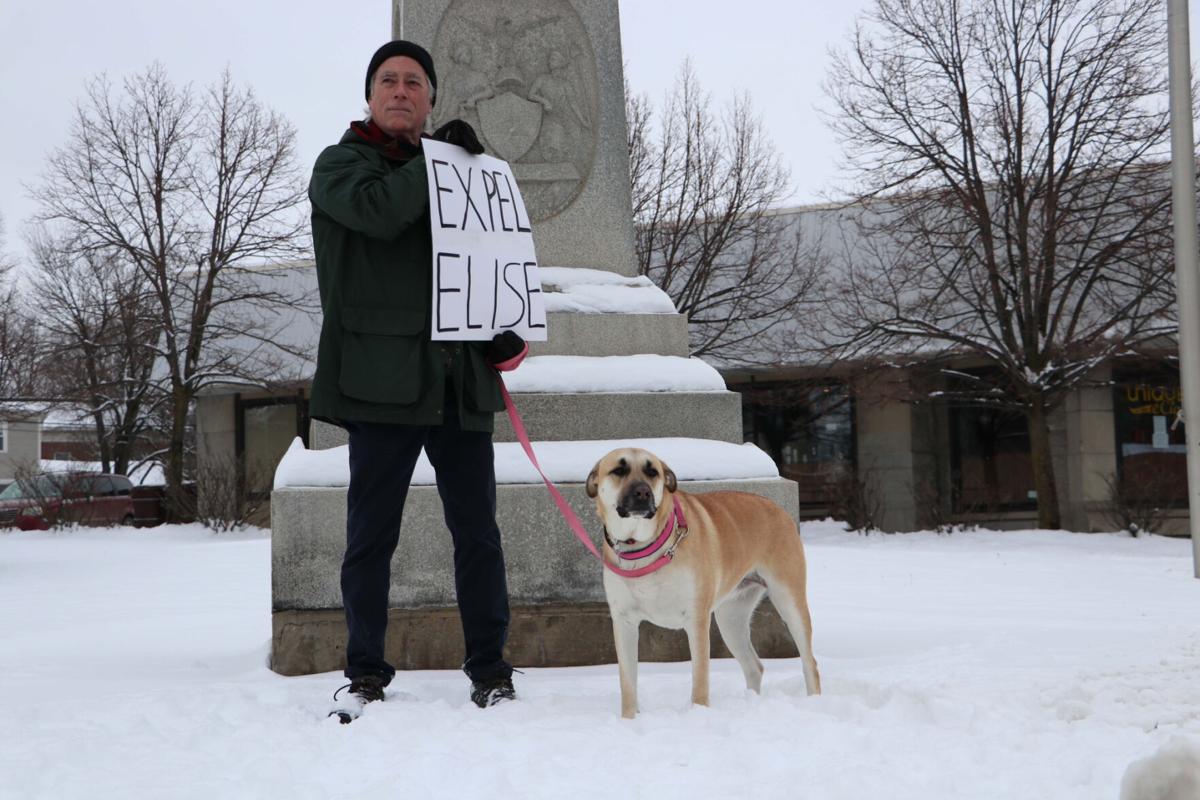 Boyce Sherwin, 68, alongside his dog, Lily, protest at the corner of Main and Elm streets in the village for the expulsion of Rep. Elise M. Stefanik, R-Schuylerville, from office. Evan Wheaton/Malone Telegram

Boyce Sherwin, 68, alongside his dog, Lily, protest at the corner of Main and Elm streets in the village for the expulsion of Rep. Elise M. Stefanik, R-Schuylerville, from office. Evan Wheaton/Malone Telegram

CANTON — In response to Wednesday’s riot at the U.S. Capitol, protesters across the north country took to the streets Thursday, calling for Rep. Elise M. Stefanik’s resignation — including her former Democratic challenger, Tedra L. Cobb.

The protesters accused Rep. Stefanik, as well as other GOP lawmakers, of promoting sedition, or the incitement of rebellion against the authority of the government, when they challenged the results of the Nov. 3 election that saw President-elect Joseph R. Biden win the presidency.

A petition was started at change.org early Thursday, calling for the congresswoman’s resignation. As of 5 p.m. Thursday, roughly 340 people signed the petition. The petition gaining traction overnight, and as of 12 p.m. Friday, it garnered nearly 6,500 signatures.

On Wednesday, during a joint session of the House and Senate where the Electoral College votes were officially counted, Rep. Stefanik planned to object to four states’ Electoral College votes — Pennsylvania, Georgia, Wisconsin and Michigan — citing changes those states made to their election laws to account for the ongoing coronavirus pandemic as unconstitutional overreaches by those states’ various officials and judges.

Rep. Stefanik was actually preparing to deliver her initial remarks when protesters broke into the Capitol building at about 2 p.m., forcing Congress into recess to protect lawmakers. For hours, supporters of President Donald J. Trump walked unhindered through the halls of the Capitol, breaking into members’ offices, stealing mementos and causing significant damage.

One woman was shot in the neck, later dying, and three other people died due to “medical complications” during the siege, according to Washington, D.C., police.

While a number of Republican lawmakers halted their plans to object to states’ election results, Rep. Stefanik carried on with her objections, voting to object to the electoral results from Pennsylvania, although she did not get the chance to vote on the other states she planned for.

On Thursday, demonstrators across the north country said Rep. Stefanik, as well as the other GOP lawmakers who supported objecting to election results, fanned the flames of rebellion and were directly responsible for the violence that swept the Capitol on Wednesday.

Small groups of people gathered outside the congresswoman’s Watertown, Plattsburgh and Glens Falls offices, as well as other parts of the district.

Ms. Cobb was holding a sign which read, “No Domestic Terrorism -resign.”

“I think Americans are really angry today,” Ms. Cobb said. “The acts of yesterday were sedition and our elected officials who supported this president should be held accountable and should resign.”

John Casserly, who was also in Canton along with Ms. Cobb, said misinformation was at the heart of the issue.

“A lot of it has to do with streams of information,” Mr. Casserly said. “People get information from all different places, so there is a lot of questioning of what actually is going on.”

The gathering in Canton came about without a lot of organization, Ms. Cobb said.

“We just have a really great network,” she said. “Of course we use all of the social media that we have. We have created a community of people who care about the country and it is not just happening here, it is happening everywhere.”

“Elise needs to resign,” Ruth Anne, a longtime Watertown resident, said as she held a sign that called for the same. “She should never have been part of this.”

Ms. Anne said while there are many conservative supporters of Rep. Stefanik and Mr. Trump in the north country, she doesn’t believe they support acts of sedition like what was seen in the Capitol.

Mauranda Stahl, former communications director for Ms. Cobb’s ill-fated run for Congress in 2020, was also protesting in Watertown on Wednesday.

“Yesterday we watched the U.S. Capitol, I think Biden called it the citadel of our democracy, be attacked, and yet (Stefanik) still chose (Trump) over democracy,” she said. “We have a fundamental history in this country of ensuring and protecting the vote, and Elise Stefanik has taken it upon herself to try to usurp the will of thousands and thousands of her own constituents.”

Ms. Stahl said she was not surprised that Rep. Stefanik decided to carry on with her objections, even after witnessing the violence and unrest caused by people who believed the election was fraudulent.

“Several years ago, I would have been surprised (to see her carry on with objecting),” she said. “Elise Stefanik has branded herself as an independent voice for the north country, but in the last few years she’s shown herself to be anything but that.”

She said Rep. Stefanik’s next step should be resignation, although that is unlikely. She said there was a resolution introduced in the House of Representatives late Wednesday by Rep. Cori Bush, D-Mo., that if passed, would remove every congressperson who objected to the electoral results from office.

“I think that should be allowed to go forward, that is the democratic process,” she said.

Malone resident Boyce Sherwin stood by himself on the corner of Maine and Elm streets in the village Thursday to also protest Rep. Stefanik’s actions, and to call for her expulsion from Congress.

Mr. Sherwin, 68, was outraged at the events that took place at the Capitol on Wednesday, and brought with him a sign that said, “EXPEL ELISE” on it. He met with occasional honks and beeps from cars passing by.

“The president of the United States incited gangs to disrupt and take over the legislative body during a time of historic constitutional action,” Sherwin said. “His behavior — absolutely unacceptable, and Stefanik has backed him all the way.”

Mr. Sherwin felt Rep. Stefanik was responsible for insinuating the acts of violence.

“She stirred it up and said, ‘Oh, no, no, no, I don’t believe in that,’” Mr. Sherwin said. “Yeah, Elise has thrown her lot in with Trump, the worst president — certainly that I’ve ever known. Worse than Nixon. It’s disgraceful behavior and I don’t expect her to do the right thing and resign, so that’s why I’m saying expel her. Expel Elise. Her behavior is absolutely unacceptable.”

Do you believe Rep. Elise Stefanik should resign following continued support for President Trump after the violence at the U.S. Capitol?

The editorial boards of Missouri’s two major newspapers, the Post-Dispatch and the Star, are both now calling on Josh Hawley to resign.

Sen. Hawley seems to be having many problems. I’m not sure I see the difference between him and Stefanik though except one’s in the House and one in the Senate.

I smell sore loser. Congresswoman Stefanik was a victim doing her work in the chamber when all of a sudden Speaker Pelosi and her vice Scalisi were removed. Our representative felt fear not animosity but as usual 21st district losers cry and cry and cry.

Congresswoman Stefanik was a victim doing her work

Those barbarians who stormed the Capitol were programmed by the lies of Trump, his media/propaganda outlets and Republican politicians like Stefanik who went along with the whole lie that the election was “stolen.” The real question is why all the Republicans who fomented this went into shelter. These were their peeps who were doing the takeover. Also, where was the guy who instigated it with a lot of “we will go to the Capitol” and “I’ll be there with you?” Oh, he was at the WH watching his handiwork on TV.

I still believe the capital protesters were a distraction attempting to deal with the huge surge in covid-19 cases across the nation. When president Trump said "I will be with you" he meant in spirit. Democrats in the NY 21st especially in Tedra Cobb''s back yard constantly berate Congresswoman Stefanik. We republican voters understand it comes from voices of sore losers. Elise Stefanik is beginning her 4th term in congress her 7th straight year, she's a success story quit crying.

Democrats in the NY 21st especially in Tedra Cobb''s back yard constantly berate Congresswoman Stefanik. We republican voters understand it comes from voices of sore losers.

She’s rightfully, obviously IMO because I’m one of the ones doing it, for helping to foment insurrection. Your defense of her is to call those us who criticize her sore losers and wail “Leave Elise alone.”

I haven’t said anything about her that isn’t true so how about responding to that rather than questioning our right to criticize our representative to Congress.

When president Trump said "I will be with you" he meant in spirit.

Well, apparently he’s not with the rubes anymore is he? Not in spirit or any other way.

Any comments on President Whiner who’s at the heart of the attack of January 6th?

Please see my answer to Holmes. Oh, and you and he can feel free to complain. Because I’m here in a comment thread commenting.

Hmmm, who would have predicted that? Cobb lost twice to Elise what would expect her to say? What a surprise!

You’ve been here since the storming of the Capitol excusing it and trying to suggest it was really antifa and a ton of other nonsense without placing blame where it belongs. So, who could predict you’d be attacking Tedra Cobb for exercising her Constitutional rights by protesting in a way that doesn’t, you know, break the law?

Cobb LOST!!!!!!! It was not even close. So could care less what you think looser. Remember your riots of BLM and Antifi??

Trump lost, too. And because he couldn’t get over it 5 people have died and the US Capitol was stormed and vandalized. Tedra Cobb is expressing her views legally.

Democrats are the most hateful group of humans!!!! They will ruin the country as we know it with their agenda.

Democrats are the most hateful group of humans!!!!

To you every Democrat is worse than the barbarians who entered the Capitol and killed a police officer by beating him to death with a fire extinguisher?