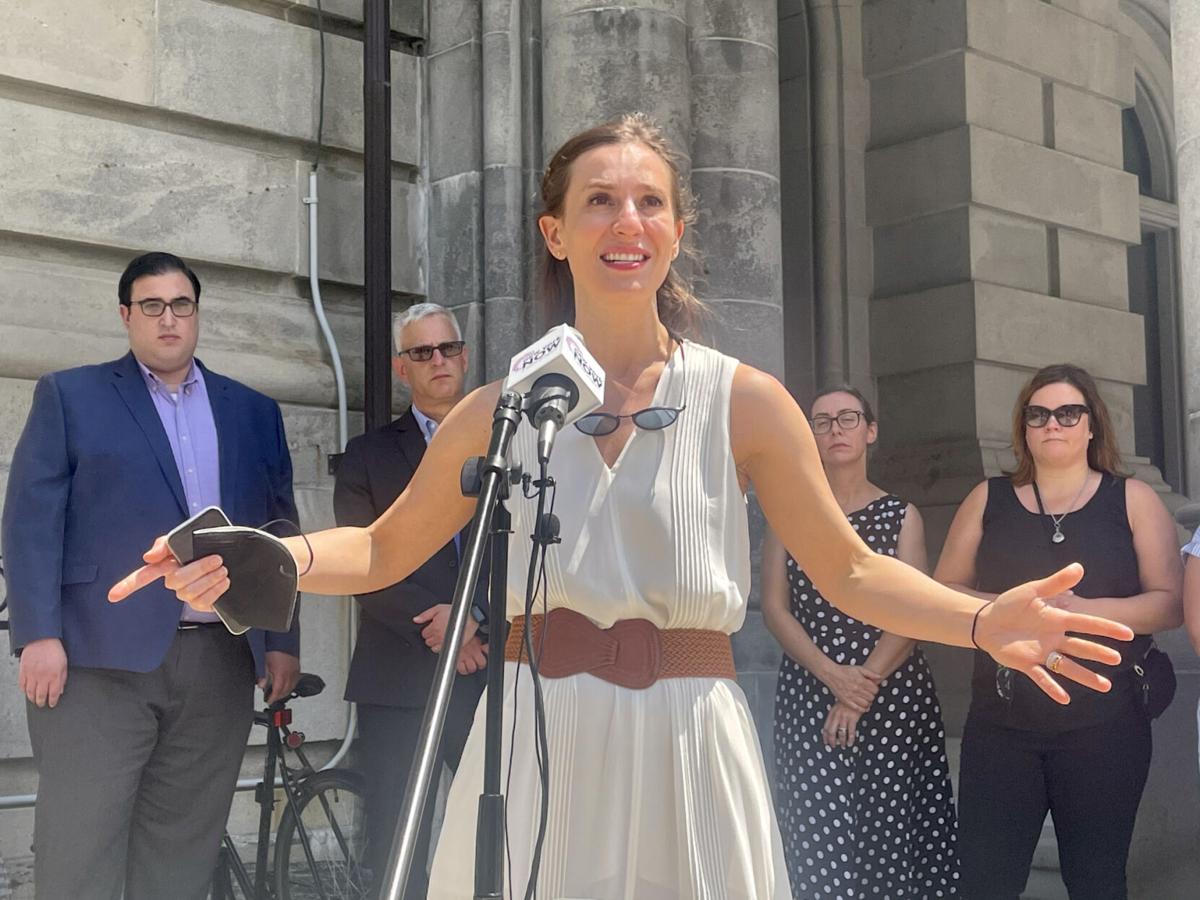 State Sen. Alessandra Biaggi, D-Bronx, a survivor of childhood sexual abuse, was one of several survivors to rally outside the state Capitol last June for Assembly leaders to pass the Adult Survivors Act. The fight was renewed this week with the start of the 2022 legislative session. Kate Lisa/Johnson Newspaper Corp. 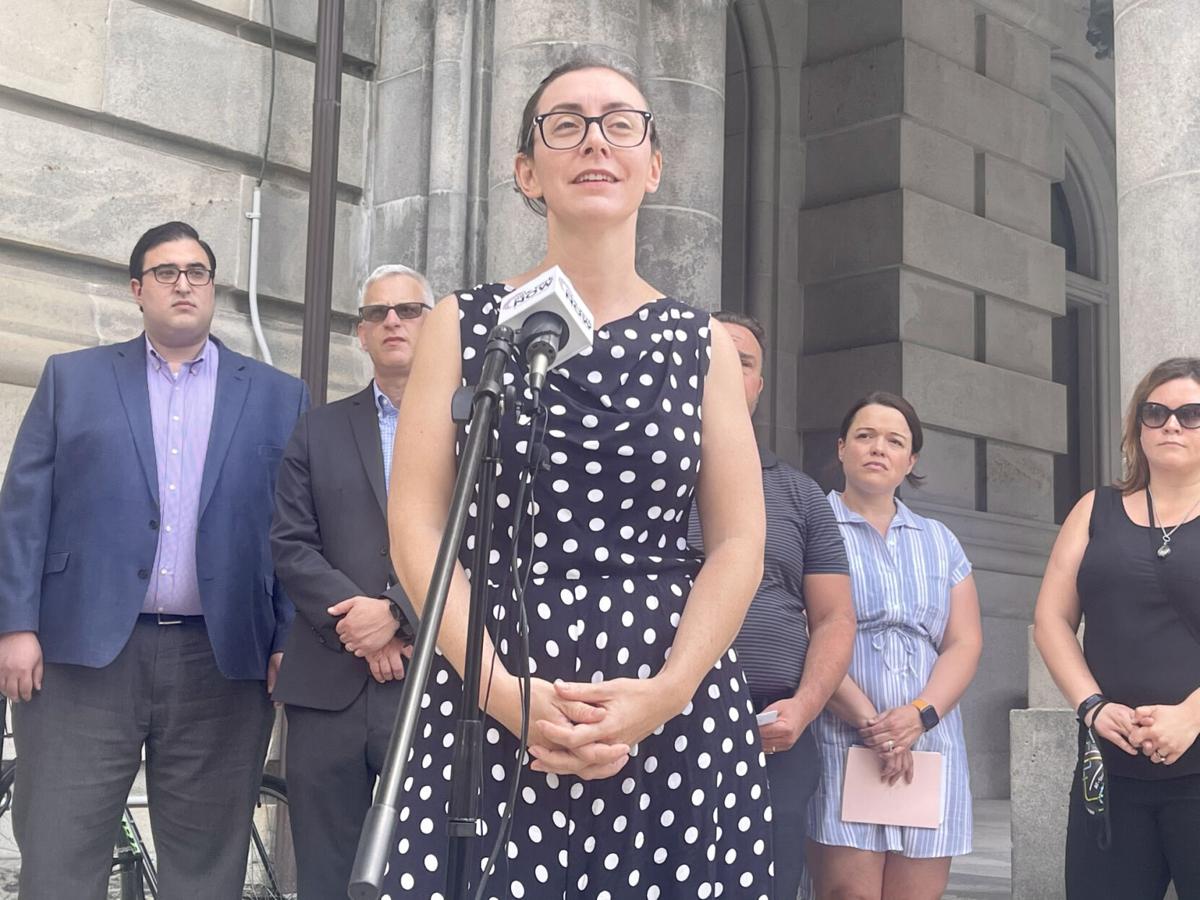 Marissa Hoechstetter, one of hundreds of victims of medical sexual abuse by a downstate gynecologist, stands in front of the state Capitol last June to plead for Assembly leaders to pass the Adult Survivors Act. The fight was renewed this week with the start of the 2022 legislative session. Kate Lisa/Johnson Newspaper Corp.

State Sen. Alessandra Biaggi, D-Bronx, a survivor of childhood sexual abuse, was one of several survivors to rally outside the state Capitol last June for Assembly leaders to pass the Adult Survivors Act. The fight was renewed this week with the start of the 2022 legislative session. Kate Lisa/Johnson Newspaper Corp.

Marissa Hoechstetter, one of hundreds of victims of medical sexual abuse by a downstate gynecologist, stands in front of the state Capitol last June to plead for Assembly leaders to pass the Adult Survivors Act. The fight was renewed this week with the start of the 2022 legislative session. Kate Lisa/Johnson Newspaper Corp.

ALBANY — State lawmakers expressed confidence Thursday that this year will mark the successful legislative session the Adult Survivors Act is signed into law.

The Adult Survivors Act would allow New Yorkers who suffered sexual abuse after the age of 18 — including people assaulted by medical providers, formerly incarcerated people or models in the fashion industry, athletes and others — to file civil lawsuits against their abusers for one year, regardless if a statute of limitations on legal claims has expired.

“It often takes years to realize the full reach of a serial perpetrator’s crimes,” said Marissa Hoechstetter, one of more than 200 survivors of sexual abuse by ex-Columbia gynecologist Dr. Robert Hadden.

Hoechstetter was 31 and pregnant with twins at the time of her abuse, and noted the widespread abuse alleged against clergy, the Boy Scouts of America and U.S. athletic team staffs, to name a few.

“We cannot rely on institutions to self-police,” she added.

The Adult Survivors Act, sponsored by Assemblywoman Linda Rosenthal and Sen. Brad Hoylman, both D-Manhattan, died in the Assembly Judiciary Committee when the 2021 session ended in June.

Rosenthal and Hoylman virtually stood with officials, survivors and advocates Thursday to raise awareness for the measure, and expressed confidence the Adult Survivors Act would be passed and signed into law this year.

“I’m angry and that’s a good motivator,” Rosenthal said. “…This year, we’re going to get it done in the Assembly.”

Assembly leadership has remained vague or largely silent on the reason the bill stalled in the lower house. Assembly Speaker Carl Heastie did not provide a clear answer in September when asked about the reason the measure died in the Assembly.

“The Speaker reviews all issues with the members of our conference,” Assembly Democratic spokesperson Michael Whyland said Thursday.

Assembly representatives would not respond to questions about Heastie’s potential concerns about the measure or how they will be addressed.

Lawmakers and officials may have been wary to pass the Adult Survivors Act for fear it would open the state to bombardment of potential litigation — especially in the wake of former Gov. Andrew Cuomo’s resignation after state Attorney General Letitia James’s report concluded he sexually harassed multiple female state staffers.

“All systems go,” Hoylman said. “The strongest indicator of whether a bill becomes a law in New York is whether it’s passed one house or not, previously. We think we’re in a really good place in the Legislature given the momentum that Linda’s built in her house and what continues in the Senate.”

Senate representatives echoed statements of the likelihood senators will subsequently support the measure.

“We are continuing to discuss but it has moved through committee which is the first step toward passage,” Senate Democratic spokesperson Mike Murphy said. “We passed this legislation last year.”

Rosenthal has cited a lack of education for members not prioritizing to vote on the bill to help adult survivors. The COVID-19 pandemic also largely prevented survivors from meeting directly with legislators.

Rosenthal thanked her 53 Assembly colleagues who have signed on in support of the measure as of Thursday.

“It’s growing every week,” she said. “Over time, our understanding of trauma has evolved. … We do know that whichever way one deals with it, the statute of limitations provided by New York state law is too short.”

The Adult Survivors Act is modeled after the Child Victims Act signed in 2019. The Child Victims Act allowed survivors of childhood sexual abuse to file civil lawsuits against their abusers for incidents that happened before age 18 until the lookback window closed in August.

Gary Greenberg of New Baltimore, a survivor of childhood sexual abuse and a leading advocate for the Child Victims Act, sent a letter Monday to Hoylman and more than a dozen lawmakers on the Senate Judiciary Committee to request a hearing about the legislation.

Greenberg has raised concerns about potential loopholes in the measure, since modeled after the Child Victims Act, that prevented survivors of childhood sexual abuse from securing legal representation for a case under the CVA if their abuser lacked monetary assets.

“We left behind so many victims, it is heartbreaking,” Greenberg wrote in the letter.

Since 2019, Greenberg has heard from hundreds of victims, by email, phone, text or through social media, who have struggled to get legal representation. In his letter Monday, he requested lawmakers hold a legislative hearing to examine potential loopholes in the Child Victims Act and amend the Adult Survivors Act to improve legal access for survivors.

“This is one of the most important issues they could hold a hearing on,” Greenberg said Thursday. “I have no idea why the leadership won’t hold a hearing.”

Senators did not respond to Greenberg’s letter as of Thursday.

Greenberg said he discussed a potential hearing with Heastie last spring, but has not heard a response from Assembly leadership since.

Survivors and lawmakers counter that legal hurdles challenging a handful of survivors should not prevent action that will bring thousands justice.

Lawmakers have recommended survivors contact Safe Horizon, a nonprofit agency dedicated to connecting victims with support services and safety, for assistance about filing a case.

A person in the United States is sexually assaulted every 68 seconds. The victim is a child every nine minutes, according to the Rape, Abuse & Incest National Network.