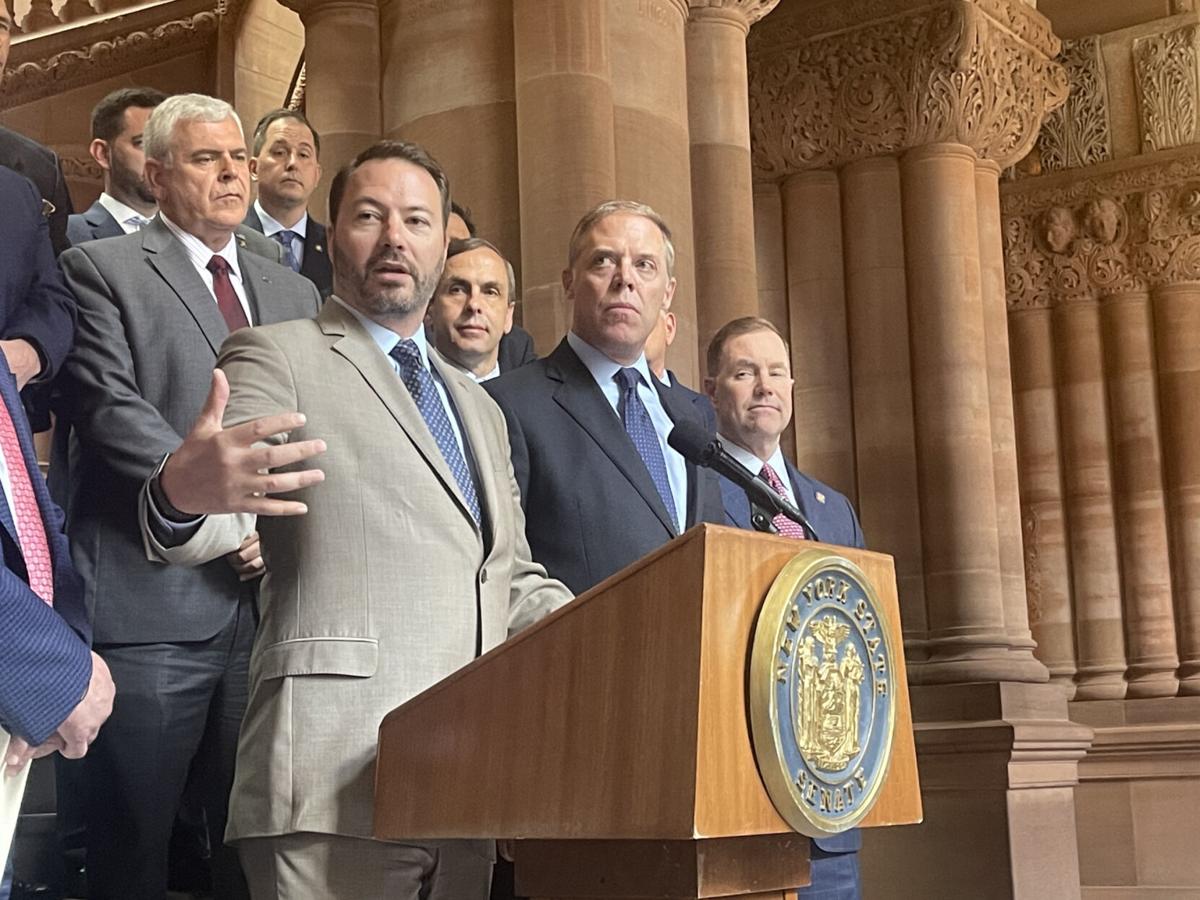 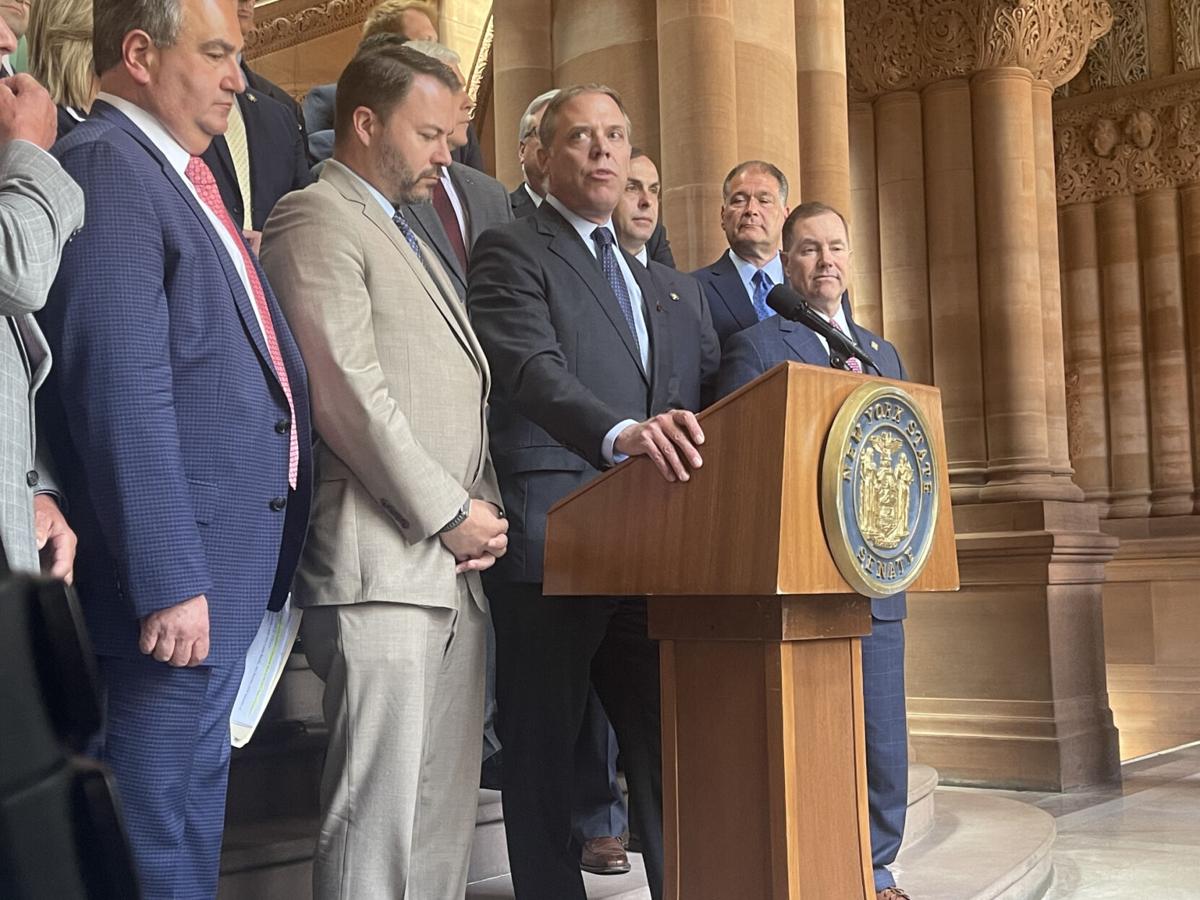 ALBANY — State Republicans have their eye on achieving one goal as this year’s legislative session races to a close: Ending New York’s state of emergency due to the coronavirus, and Gov. Andrew Cuomo’s expanded pandemic-era authority along with it.

Senate Republicans continued to wait Tuesday for Democrats in the chamber’s majority conference to put a joint resolution from the GOP on the calendar to end the state of emergency Cuomo first declared March 7, 2020.

Cuomo’s broadened decision-making and spending authority the state Legislature unanimously granted at the onslaught of COVID-19 will expire when the state of emergency, or the pandemic, officially ends.

“For this particular bill, the Senate Majority needs to put it on the calendar to take it up,” Senate Republican spokeswoman Katy Delgado said Tuesday of the party’s joint resolution. “They are also in charge of providing the resolution number — that’s why we are waiting on it. We would hope (it’s placed on the calendar) soon, especially since these are the last days of the session.”

The 2021-22 legislative session is scheduled to end Thursday.

Republican lawmakers held their final joint news conference of session Monday afternoon to call on their colleagues and legislative leaders to not leave Albany this week until they vote to terminate’s New York’s state of emergency and return the state to pre-pandemic government operations.

“The notion we could leave here leaving the emergency powers in place where the governor, essentially alone, can continue to govern the state and govern the pandemic by executive order, to me, is unconscionable,” said Senate Minority Leader Robert Ortt, R-North Tonawanda. “We’re going to leave this in place for the foreseeable future with no ending. Our resolution would declare an end to the state of emergency, which, in law, would trigger the end of the governor’s executive powers.”

Cuomo has issued 109 pandemic-related executive orders since the state of emergency began.

Democrats in early March voted to amend the governor’s expanded powers, including his ability to issue new executive directives. Cuomo can extend or modify the 96 executive orders he put in place from March 7, 2020, through when the rules changed March 5, but must notify the Legislature and local officials at least five days before the changes take effect.

Republicans in the Assembly, led by Minority Leader William Barclay, R-Pulaski, did not know Tuesday when Democrats in the majority conference would assign the resolution to end the state of emergency a number.

“They don’t process them one at a time or immediately as they come in,” he added. “I wouldn’t expect a number on that resolution this week or next week. I can’t predict when we’ll have one or when it will be assigned a committee.”

Lawmakers argued the ongoing state of emergency and the governor’s expanded spending and decision-making authority are obsolete now that the state the nation’s lowest average COVID-19 infection rate, according to Johns Hopkins University.

New York’s coronavirus infection rate was 0.51% on Tuesday over a seven-day average. The state’s virus positivity has declined for 64 straight days, along with a continuously declining hospitalization and daily fatality rate.

“The virus is no longer stressing the limits of our health care system,” Barclay said. “We’ve made great progress in fighting back against the virus and restrictions have been loosening for months. ... State government should acknowledge it’s time to operate the way it’s always been intended.”

Republicans chastised Cuomo for continuing to keep the state Capitol closed to visitors as part of ongoing COVID-19 restrictions while permitting thousands of spectators to attend a sporting event or other gathering at a large venue.

“Leader Barclay and I have called for the Capitol to be open,” Ortt said. “To me, it’s a shame. The idea you can’t come to this building and advocate and talk to your legislators. We are doing all of this as if it was business as usual, and it’s not.

“We were elected to do a job,” he added. “We’ve been prepared to do our job.”

Cuomo’s expanded authority was initially set to expire April 30 before the Legislature, which is controlled by a supermajority of Democrats in both houses, amended the governor’s powers March 5.

The Legislature can vote to terminate the state disaster emergency by concurrent resolution and a simple majority vote.

Senators in the minority conference have pushed a hostile amendment to rescind Cuomo’s expanded pandemic authority 47 times since last summer.