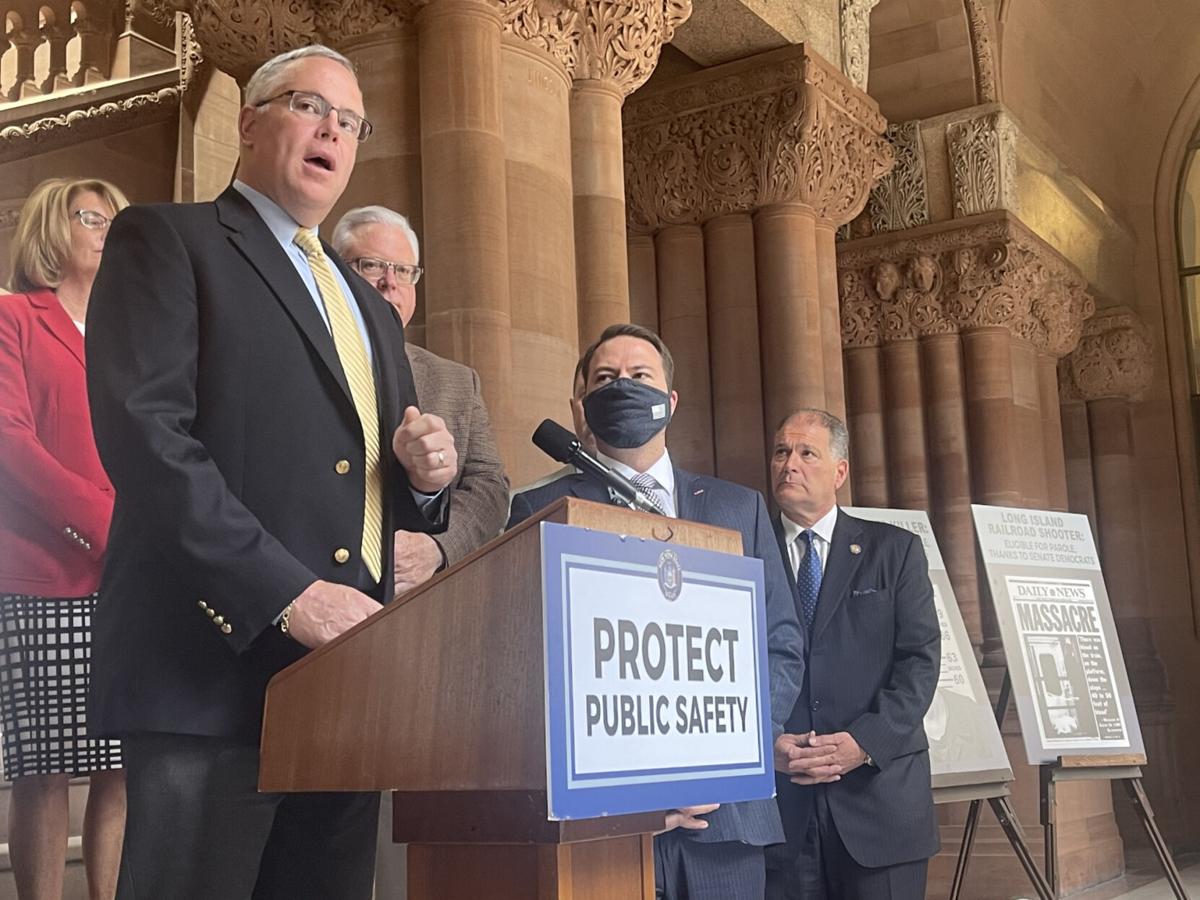 Sen. Daniel Stec, R-Queensbury, was one of several Senate Republicans to introduce the minority’s parole reform legislation at a press conference inside the state Capitol in Albany on Tuesday. Kate Lisa/Johnson Newspaper Corp. 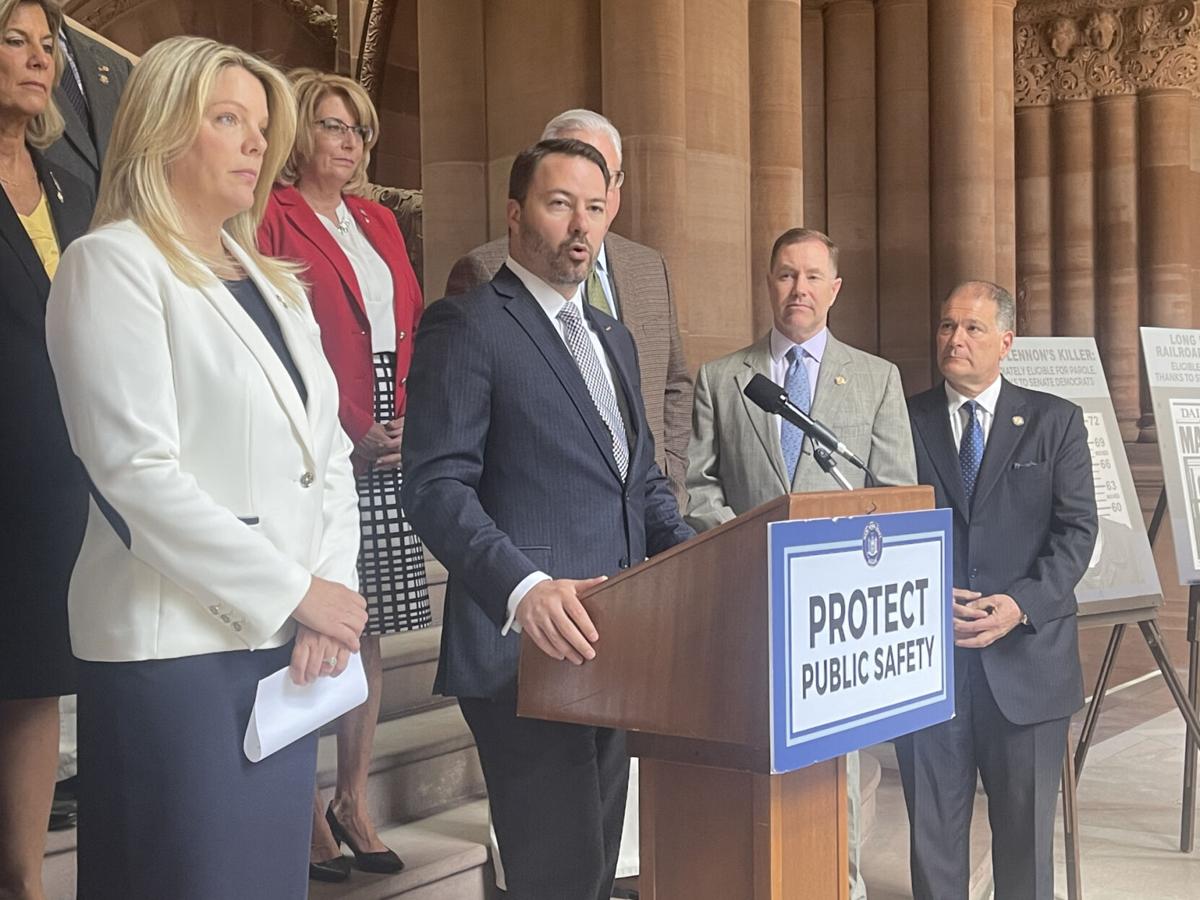 Sen. Daniel Stec, R-Queensbury, was one of several Senate Republicans to introduce the minority’s parole reform legislation at a press conference inside the state Capitol in Albany on Tuesday. Kate Lisa/Johnson Newspaper Corp.

ALBANY — Senate Republicans on Tuesday pushed against proposed parole reform expected to pass before the session ends next week with eight bills to bolster the rules to release an incarcerated person from prison.

Standing in front of the Million Dollar Staircase in the state Capitol, Republicans pushed an eight-measure parole reform package, including legislation that would require all victim impact statements be video recorded and reviewed by members of the state Parole Board before a parole hearing; to allow any person to submit a written statement for or against releasing an incarcerated person for the parole board to consider; and all third-party comments or testimony be considered in a parole hearing and increasing confidentiality of victim statements.

“As if that weren’t bad enough, radicals in the one-party-ruled Legislature are now planning to spring New York’s most dangerous criminals loose with their latest ‘reforms,’” Senate Minority Leader Robert Ortt, R-North Tonawanda, said Tuesday. “Spree killers. Serial killers. Child killers. Even the Son of Sam and Mark David Chapman could be eligible to be released under Democrats’ dangerous proposals.”

Senate Majority Leader Andrea Stewart-Cousins, D-Yonkers, spoke in favor last week of the need to pass state parole reform this session, including the passage of The Fair & Timely Parole Act and Elder Parole.

If passed, Elder Parole would require inmates over 55 years old who have served 15 or more consecutive years automatically be considered for parole regardless of their crime or sentence.

The Fair & Timely Parole Act would amend executive law mandating the state’s Parole Board to release eligible incarcerated people on parole unless the person presents a current and unreasonable risk, according to the bill, or a risk that cannot be mitigated by parole supervision.

“To be clear, their proposals aren’t reform — they are utter madness, especially at a time when crime rates in major metro areas all across the state are on the rise,” Ortt said. “It’s time for our colleagues on the other side of the aisle to reject this unsafe path, and join us in our efforts to restore common sense and public safety in New York.”

Representatives of Democrats in the Senate Majority and Assembly Majority conferences did not return requests for comment Tuesday.

Senate Democrats on Tuesday afternoon tweeted a Newsday article from Saturday that the state Legislature intends to pass parole reform measures before the end of session June 10, and highlighted a quote from Sen. Zellnor Myrie, D-Brooklyn.

“In a civilized society, no New Yorker’s future should be limited by the darkest moment in their past,” Myrie said.

The conference tweeted the article and quote about two-and-a-half hours after the Senate Minority’s press conference on the subject.

Republicans pushed their legislation Tuesday in direct response to Democrats’ support of the Fair & Timely Parole Act, Elder Parole and Clean Slate Act, which would seal and expunge certain New Yorker’s criminal records after completion of their prison sentence. The act would clear records after one year misdemeanors and three years for certain felonies.

Officials in the criminal-justice system, such as judges, district attorneys and police, have access to sealed criminal documents.

“Bemoaning a spike in crime across the state after signing these bills is akin to an arsonist saying, ‘Where did the smoke come from?’” Stec said Tuesday. “Gov. Cuomo, you lit the match by signing these bills. We have two weeks left in our session. The governor is concerned about crime? This isn’t complicated. Send us a program bill that unrings this bell that you rang.”

Other Republicans argued a person convicted of a violent crime does not become less dangerous after a certain age.

The total incarcerated population in state correctional facilities is 31,890 as of Tuesday, with about 15% or 4,869 individuals aged 55 and older, according to the state Department of Corrections and Community Supervision.

One of Ortt’s sponsored measures would allow a simple majority vote in the Senate and Assembly to remove a state Parole Board member, and requires at least three members of the board personally interview potential parolees.

Up to 19 people can serve on the state’s Parole Board. The board has three vacancies, or has had 16 members, since July 2019.

“We are always reviewing potential applicants subject to ‎approval by the Senate,” Azzopardi said about the issue April 30.

About 24% of people in state prisons, or nearly 1 in 4, are serving life or virtual life sentences.

Assistant Minority Leader Sen. Joseph Griffo, R-Rome, sponsors a bill that would allow the state Parole Board to require a violent felony offender serve his or her maximum prison sentence, or authorizes withholding good-behavior allowances to prevent a person’s release if they would pose a danger to society, according to the measure.

The Senate GOP also included Lorraine’s Law in its parole reform package, to more than double a person’s reconsideration for parole convicted of a violent felony offense to 60 months, or five years.

A person denied parole can typically reapply for release after two additional years in prison.

Donna Robinson is the mother of a daughter serving 15 years to life in Bedford Hills Correctional Facility for women in Westchester County, and a family member of a person who was murdered.

Robinson is also a survivor of sexual and physical abuse and domestic violence.

“Yes, they know how to cherry-pick cases to get headlines, but do they care to know that many of us who are victims and survivors of sexual and physical violence are also harmed by their racist policies and that we actively support expanded pathways to release from prison?” she said. “Do they care that many of us who have lost family members have done our own work to heal and forgive as they re-open our wounds with their talking points? We have suffered intergenerational trauma and they’re making it worse.

“My daughter ... made a terrible mistake, and is now a loving mother, grandmother and a beautiful person who has grown immensely,” Robinson added. “Without parole reform she might never get a fair chance at release. We depend on each other for healing and grace. New Yorkers believe in redemption, but these politicians want only permanent punishment and family separation, two things that do nothing to make our communities safer.”