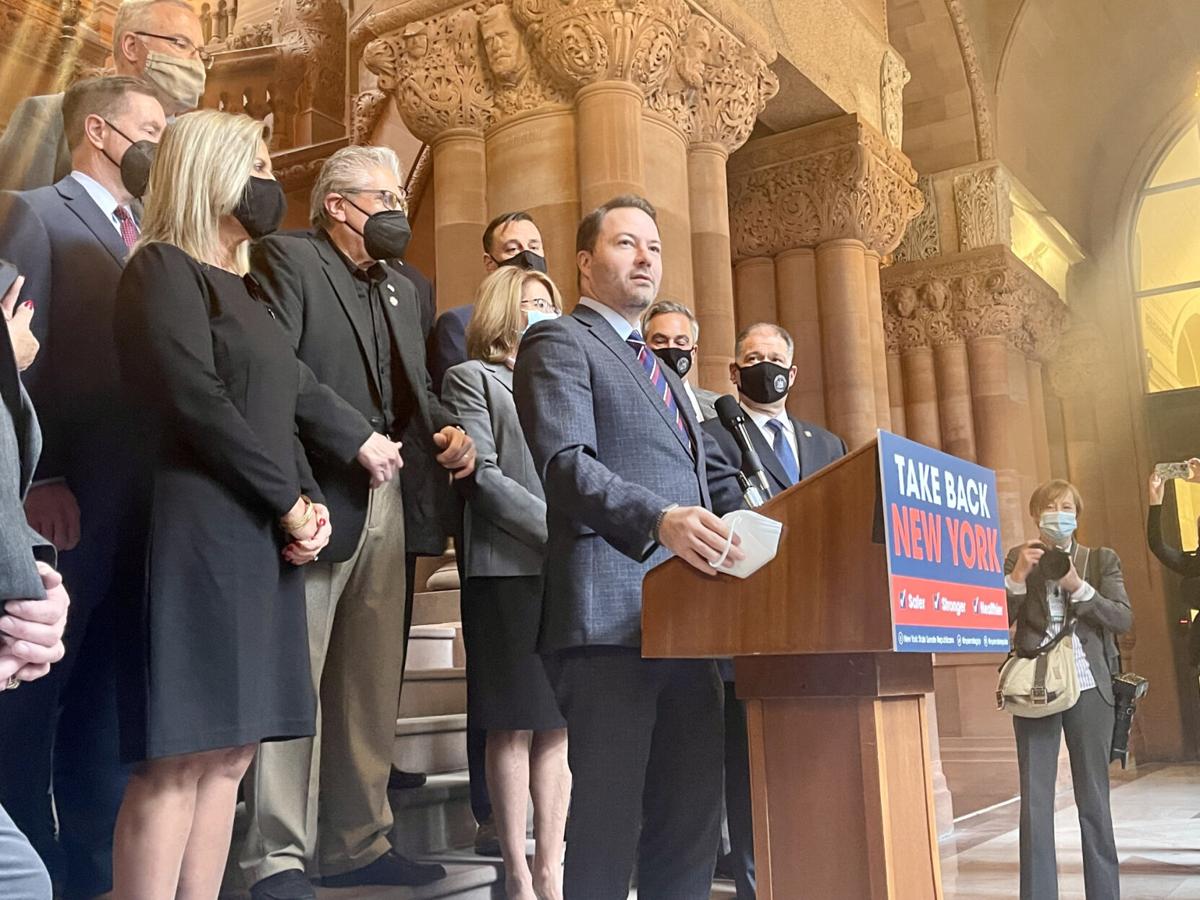 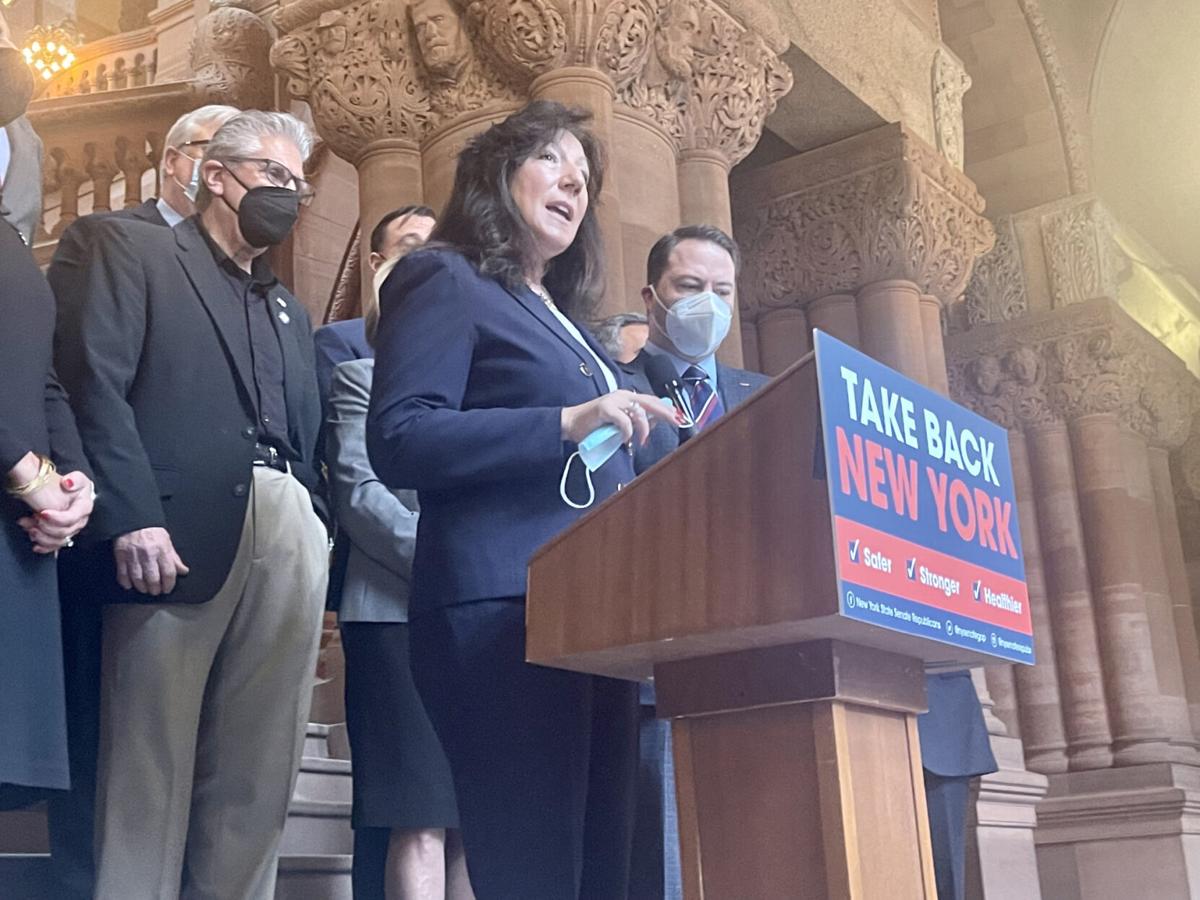 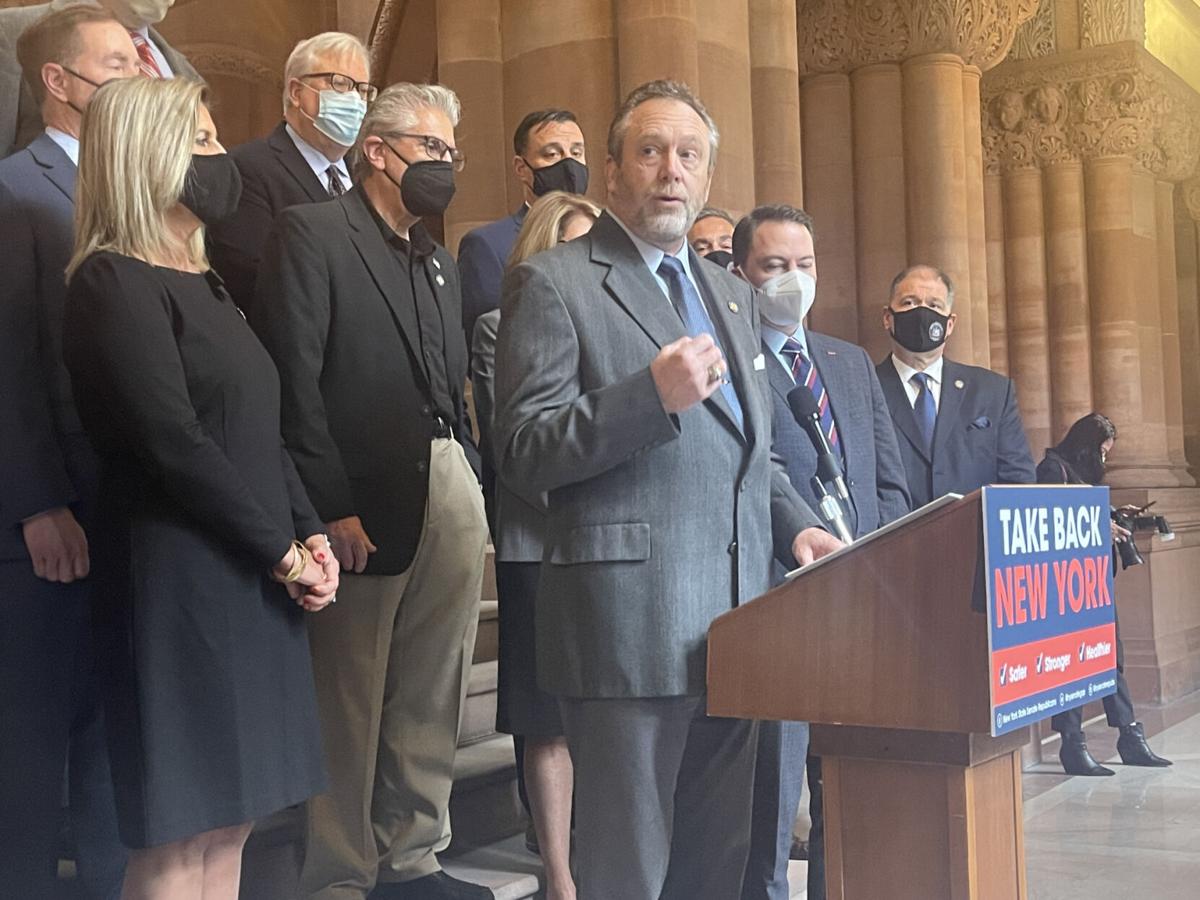 ALBANY — Senate Republicans jumpstarted the 2022 legislative session Wednesday before the first gavel to outline their agenda for the year, announcing they will fight hard to repeal the state’s cashless bail laws, cutting taxes and measures to improve workforce development programs to bolster New York’s economy.

Republicans in the upper house pledged to prioritize public safety, reducing the cost of living, increasing access to quality education and strengthening the workforce, they said, noting the state had the nation’s highest population decline from July 2020 to 2021.

“... We are going to present that alternative today, and each and every day,” Ortt added. “We are here in Albany and beyond and we’re going to let New Yorkers know there’s an alternative to what they can see under one-party Democratic rule.”

The 20 senators in the minority conference outlined general ideas for their legislative priorities for the year Wednesday, but did not name specific proposed legislation they will move to push this session.

Representatives with the minority conference said specific bills will be prioritized and released by topic or legislation package in the coming weeks.

Lawmakers noted the strong Republican support from the most recent Election Day results as proof the majority of New Yorkers want to see changes in how the state manages criminal justice reforms and public safety.

Ortt said the 3,500 victims of violent crimes committed in the state in 2021 by people released without bail for previous nonviolent offenses is far too many and proves the law needs to be changed.

Ortt said Democrats have improperly characterized the 3,500 cases — or about 4% of people released due to the bail changes — as a proof of the law’s success.

“I don’t think this is insignificant, statistical or otherwise, and I’m sure if you talk to the 3,500 families of those victims, they would agree with that,” Ortt said. “So that was my big takeaway. The goal of every legislator, every elected official should never be to create more victims. Is that like a price that we’re paying to be more socially just or more ‘woke’ about?”

Gov. Kathleen C. Hochul did not mention the state’s controversial bail laws in her State of the State speech Wednesday.

The Senate Republican’s Take Back New York 2022 agenda promises to provide new tax benefits for family caregivers and expand home-care opportunities for aging New Yorkers, and increase support for nursing homes and elder care. The overview includes a commitment to increase investment in opioid prevention, treatment and recovery services, and to double the state’s annual funding, to more than $4.5 million, for the Joseph P. Dwyer Veterans Peer-to-Peer Support program for veterans suffering from PTSD.

Sen. Sue Serino, R-Hyde Park, said residents of the state are tired of the spike in violent crime, government overreach partnered with some of the nation’s steepest tax rates.

“It’s time for lawmakers to wake up and hit the ground running this session to get our state back on track,” Serino said. “That starts by ensuring that New Yorkers have the freedom and the resources that they need to thrive.”

Sen. Daphne Jordan, R-Halfmoon, has long advocated for the Dwyer program to become a permanent fixture in the state budget and not to be used as a bargaining chip. She plans to focus on improving public safety and law enforcement support and a measure to create a fund for municipal fire districts this session.

Senate Republicans agreed with one of Hochul’s plans detailed in her State of the State address Wednesday afternoon: To reform the Joint Commission on Public Ethics. Senators stressed that the state Inspector General’s Office needs to be empowered to provide additional oversight over Albany’s ethical practices.

Assembly Minority Leader William A. Barclay, R-Pulaski, said Hochul’s agenda outlined in her State of the State address was a safe speech that gave New Yorkers little to get excited about.

“Inflation has been climbing for months, but the governor completely failed to acknowledge immediate action is needed to address a cost-of-living crisis that we haven’t seen in decades,” Barclay said in a statement. “Crime is going to continue to plague New York communities until Democrats reverse course on the pro-criminal platform that’s defined their party in recent years. Our state’s oppressive tax burden drives businesses and families away in record numbers because, year after year, New Yorkers have been forced to pick up the tab for the out-of-control spending habits of liberal politicians.”

“This year, it’s critical that we move past the distractions and scandals of 2021 and prepare for New York’s full recovery,” Barclay continued. “Mandates and executive orders aren’t going to achieve that. We finally need to get COVID under control, keep our children in school, ensure our businesses stay open and facilitate economic growth with responsible budgeting.”

“There is an alternative to the madness,”

That sounds so weird coming from a Republican, especially on January 6th.