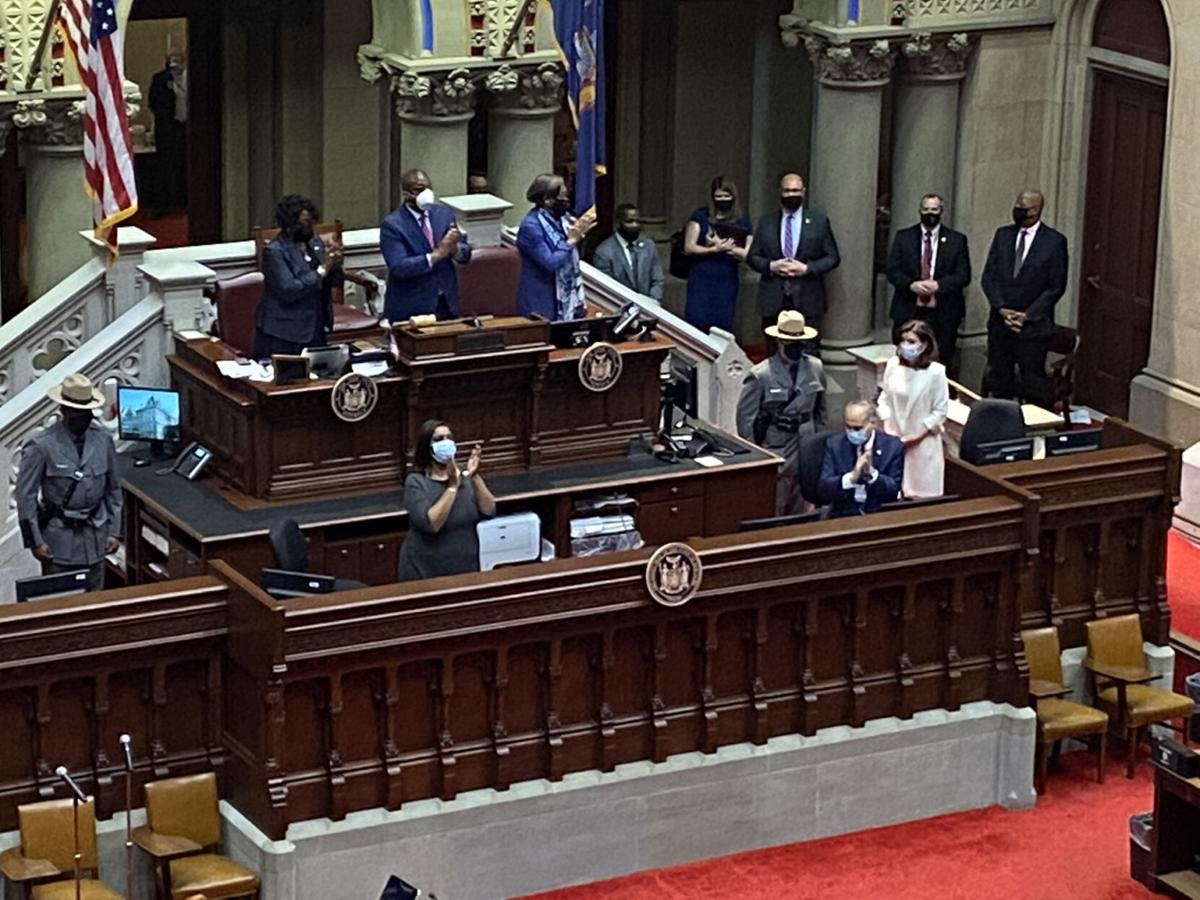 Officials applaud from the Assembly balcony after Gov. Kathleen C. Hochul finishes delivering her State of the State address in the chamber Wednesday afternoon. Courtesy of NY Legislative Correspondents Association 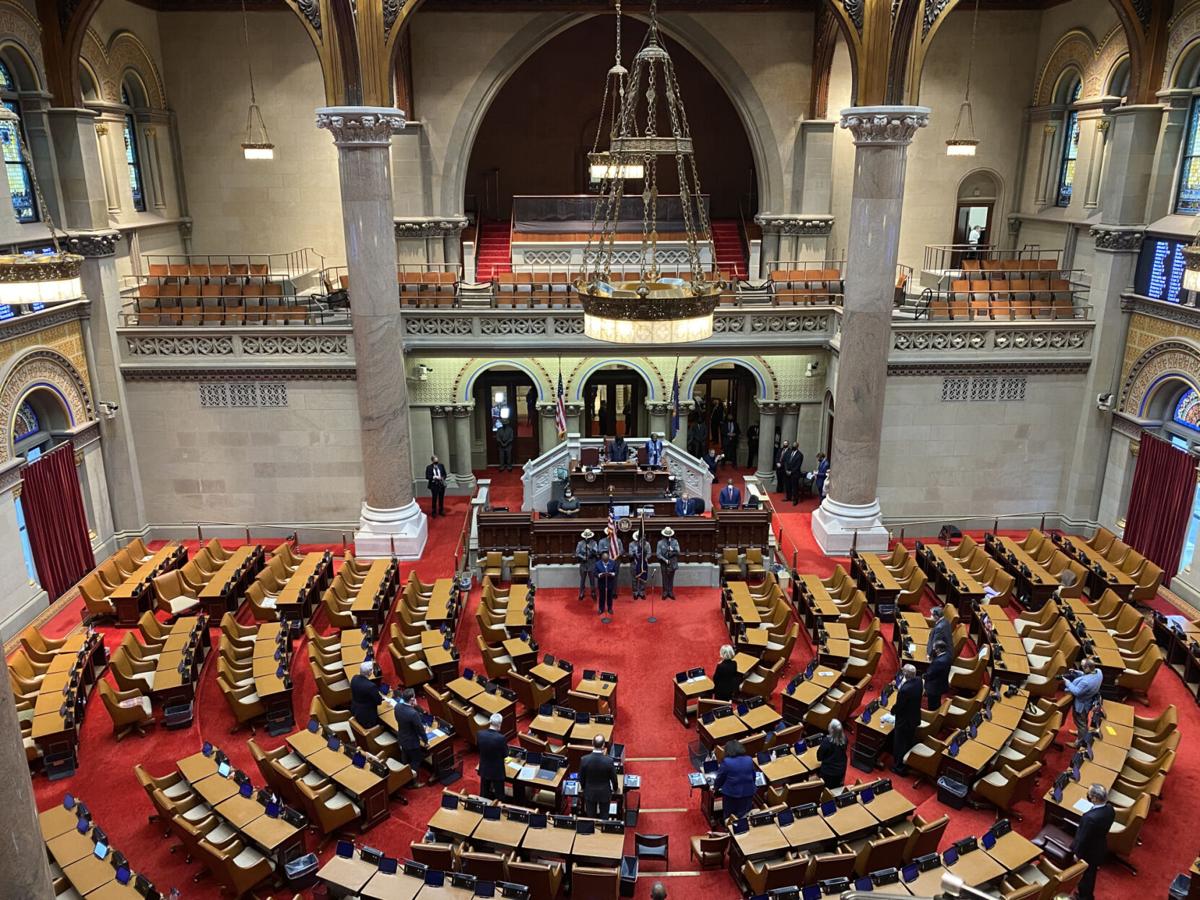 New York State Police officers stand at the front of the Assembly chamber waiting for Gov. Kathleen C. Hochul to arrive to deliver her State of the State address in the lower house Wednesday afternoon. Courtesy of NY Legislative Correspondents Association

Officials applaud from the Assembly balcony after Gov. Kathleen C. Hochul finishes delivering her State of the State address in the chamber Wednesday afternoon. Courtesy of NY Legislative Correspondents Association

New York State Police officers stand at the front of the Assembly chamber waiting for Gov. Kathleen C. Hochul to arrive to deliver her State of the State address in the lower house Wednesday afternoon. Courtesy of NY Legislative Correspondents Association

ALBANY — In her first State of the State address, Gov. Kathleen C. Hochul vowed Wednesday that 2022 will mark a new era for New York with plans to invest $10 billion in health care and its workforce, $100 million in tax relief for small businesses, to replace the state ethics watchdog agency and measures to combat gun violence and illegal firearms, among dozens of other proposals.

Hochul gave a subdued annual legislative speech to outline the state agenda for the new year at 1 p.m. Wednesday in the Capitol’s Assembly chamber — returning to a longtime tradition to hold the event in the lower house after former Gov. Andrew M. Cuomo gave the speech in the Empire Plaza Convention Center over the last decade.

Hochul, who took office as the state’s first female governor Aug. 24, became the first woman to present a State of the State address to the Legislature on Wednesday.

“I am well aware of the significance of this moment,” Hochul said. “... But I am not here simply to make history. I am here to make a difference.”

In her speech, Hochul announced her intent to permanently legalize to-go alcoholic beverages from bars and restaurants developed at the height of the COVID-19 pandemic, and a proposal to replace the Joint Commission on Public Ethics, the state ethics oversight group established under Cuomo with an independent agency.

The address was capped at 50 people in attendance to reduce the spread of COVID-19.

HEALTH CARE AND THE COVID-19 PANDEMIC

Plans to combat the economic fallout and labor shortages caused by the COVID-19 pandemic were at the center of the governor’s priorities.

The funding will help meet a new goal to grow the state’s health care workforce by 20% over the next five years.

“The health of every New Yorker depends on a strong, stable and equitable health care system and health care workers are its very foundation,” Hochul said. “Bold action is required before any more time passes.”

Hochul noted the ongoing hardships and exhaustion of the health care workforce across the state and the globe as the coronavirus pandemic enters its third year with the virulent Omicron variant amid the winter surge.

The need for health care workers in New York was projected to grow 32% between 2018 and 2028 before the pandemic, which has exacerbated the need.

The governor also outlined plans to recruit medical professionals to the industry, including to rural and underserved areas, incentives for SUNY and CUNY students to enter the health workforce, improved emergency personnel training and plans to retain the state’s existing health workers.

State officials will outline a public health approach coordinated by the state Health Department and state Office of Addiction Services and Supports to establish programs to expand sterile syringes, naloxone, buprenorphine and other medications and services to end the opioid epidemic.

Hochul outlined a series of proposals to recruit and retain teachers as the state needs about 180,000 new teachers over the next decade to meet demands.

The $35,000 income limits for retirees will be temporarily waived in efforts to incentivize any of the 169,000 retired teachers in the state to return to the classroom, including retired counselors and school bus drivers.

“The governor is heeding the pre-pandemic calls of educators to address staffing shortages in schools statewide and to diversify the education workforce by finding innovative ways to get more New Yorkers to take a look at teaching as a career,” New York State United Teachers President Andy Pallotta said in a statement in response to Hochul’s speech.

“We await the governor’s budget proposal later this month, and we’ll continue advocating throughout the legislative session on behalf of our members in education, human services and health care who day in and day out selflessly dedicate themselves to the New Yorkers they serve,” he added.

The state Education Department will have additional staff to shorten the teacher certification approval, increase learning and mental health grants for school districts and create a two-year residency program for graduate-level teacher candidates. Diversity among teacher residents and mentors will be prioritized to focus on high-need subjects and geographic areas.

Hochul plans to expand and initiate new programs and school-based intervention with a tripled $10.6 million investment in community-based programs to address gun violence.

The governor will establish a Gun Intelligence Center in each of the state’s 10 regions to more effectively solve violent crimes and prevent trafficking of illegal firearms, she said.

The state will rebuild and invest in several industries deeply affected by the pandemic, including targeted tax relief for small businesses, and a tax rebate to middle-class families, Hochul said.

The state will provide $100 million in tax relief for 195,000 small businesses to help overcome the pandemic-related economic downfall.

Hochul noted the priority to renew state roads and bridges, revitalize downtowns and enhance public transportation and mobility across the state.

State funding will increase with $1 billion investments in the local PAVE NY and Bridge NY programs to fix or update aging structures.

Officials will reimagine the access to and from John F. Kennedy International Airport and complete the Albany Skyway, which connects Interstate 787 to Clinton Street and downtown Albany.

The state will make increased investments in the north country and the Adirondacks to develop the North Creek Ski Bowl at Gore Mountain, amplify year-round park amenities for mountain biking, hiking and field sports. The plan includes creating a new recreation center and year-round chairlift in compliance with the Americans with Disabilities Act.

The state’s 2022 plans include a new initiative to reimagine advanced designs for the statewide Erie Canal system.

The governor outlined a series of state ethics reforms as part of her State of the State, keeping the theme outlined in her inaugural address last summer to restore New Yorkers’ trust in their government.

The state will establish a housing plan to create and preserve 100,000 affordable homes and 10,000 supportive housing units to combat homelessness across New York.

“New York is due for a comeback the likes of which this country has never seen,” Hochul said. “Together, we will lead that comeback.”

Additional policies and funding priorities will be outlined in the governor’s executive budget to be released by Jan. 18.

Based on her past actions her State of the State does nothing but defy belief.