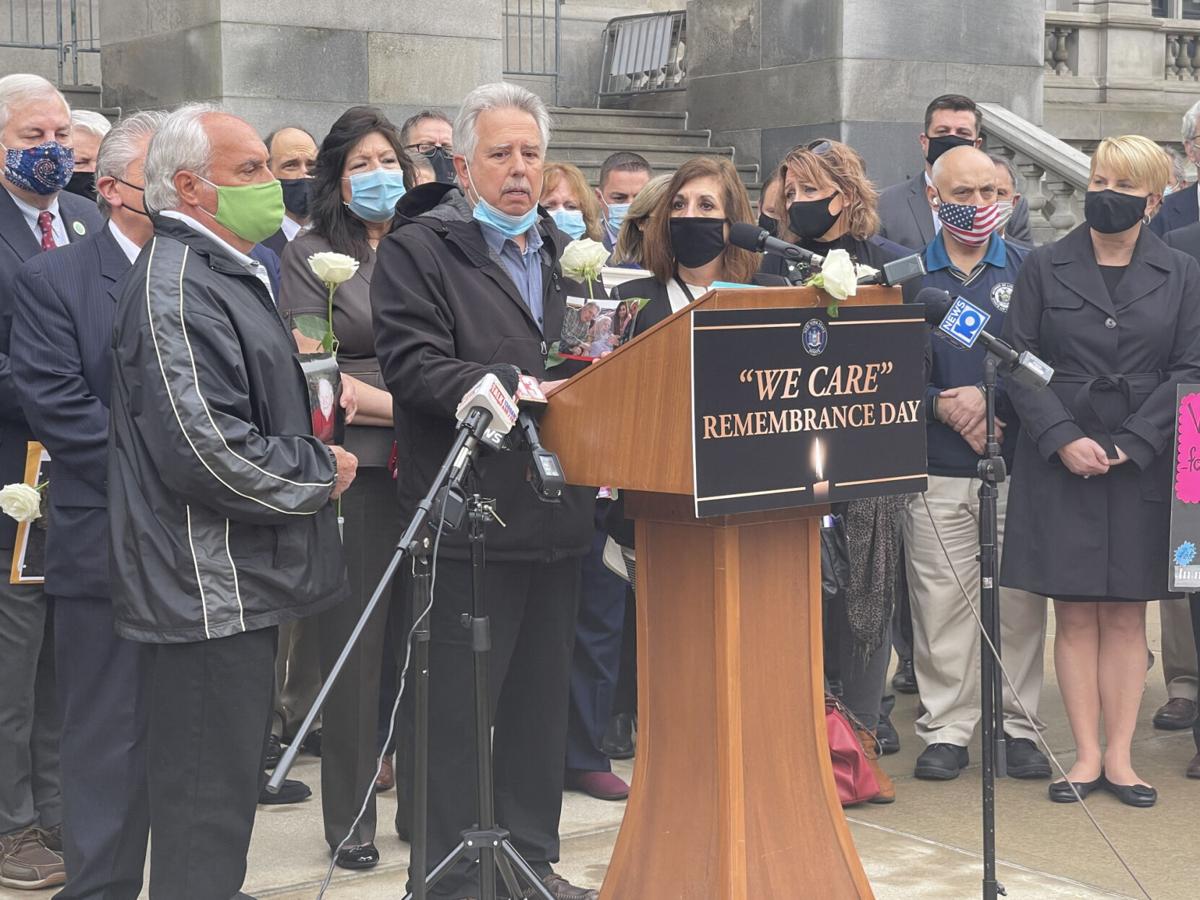 Phil Minissale recounts the loss of his 93-year-old mother, Agnes, who lived in an Albany nursing home, to COVID-19 last April in front of the state Capitol on Thursday. Kate Lisa/Johnson Newspaper Corp. 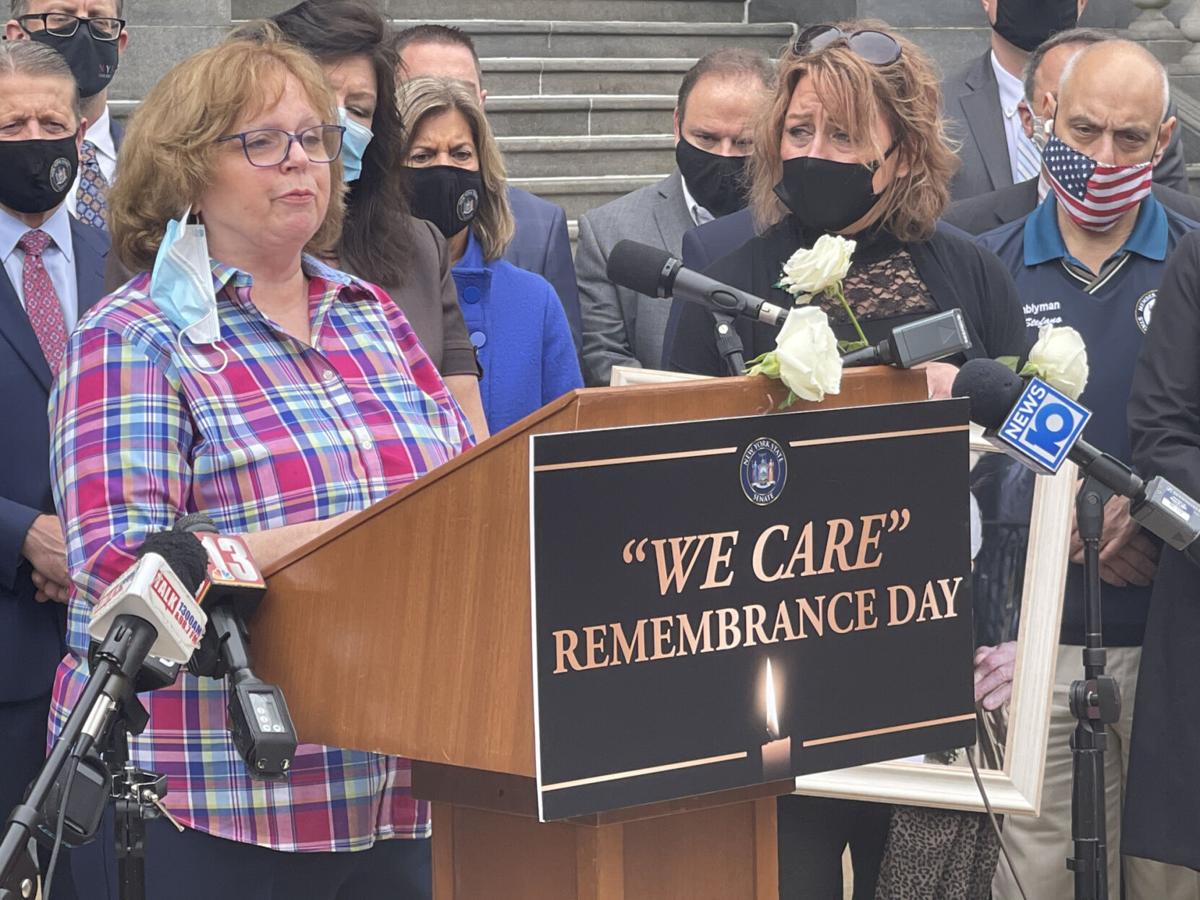 Mary Ann Boniello, of Cortlandt, Westchester County, became emotional in front of the state Capitol on Thursday, bringing lawmakers and other families to tears as she recalled the loss of her parents, William and Hilda Durr, to COVID complications eight days apart last year. Kate Lisa/Johnson Newspaper Corp. 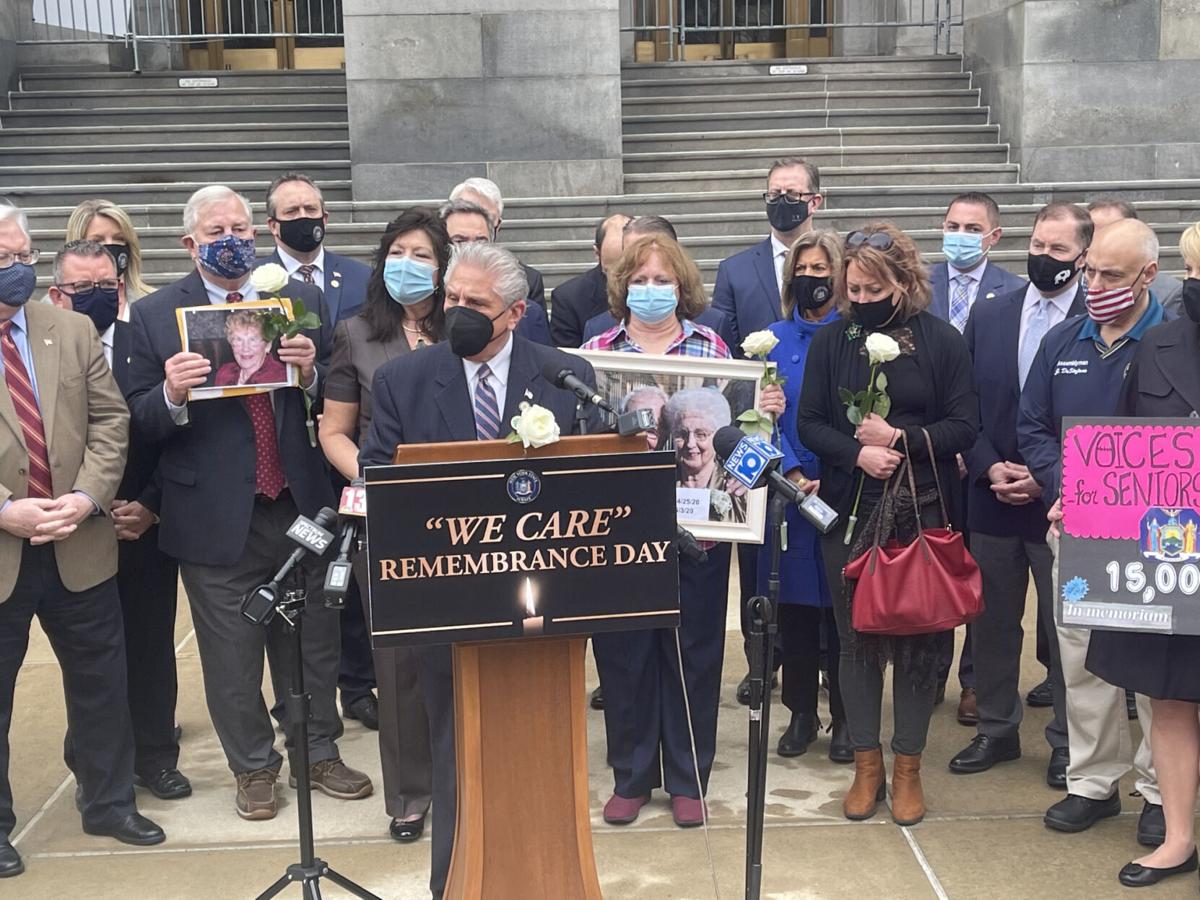 Sen. Jim Tedisco, R-Glenville, speaks at a rally in front of the state Capitol in Albany on Thursday to commemorate the one-year anniversary of the state’s controversial Health Department memo that permitted COVID-positive patients to return to congregate facilities. Kate Lisa/Johnson Newspaper Corp. 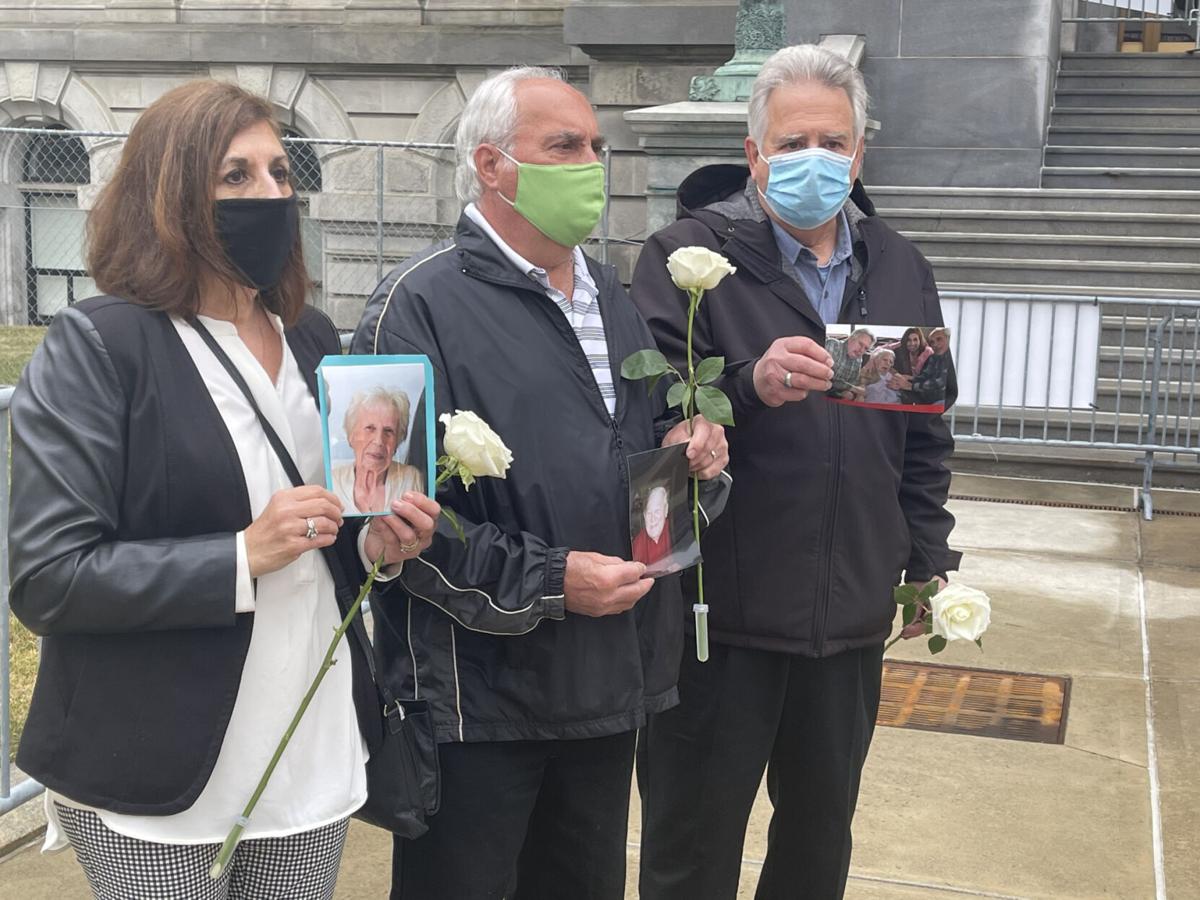 Cindy Lizzi, left, with brothers Ted and Phil Minissale, pose in front of the state Capitol in Albany on Thursday with white roses and a photo of their mother, Agnes, to remember her and the New Yorkers who died from COVID-19 in congregate facilities. Kate Lisa/Johnson Newspaper Corp.

Phil Minissale recounts the loss of his 93-year-old mother, Agnes, who lived in an Albany nursing home, to COVID-19 last April in front of the state Capitol on Thursday. Kate Lisa/Johnson Newspaper Corp.

Mary Ann Boniello, of Cortlandt, Westchester County, became emotional in front of the state Capitol on Thursday, bringing lawmakers and other families to tears as she recalled the loss of her parents, William and Hilda Durr, to COVID complications eight days apart last year. Kate Lisa/Johnson Newspaper Corp.

Sen. Jim Tedisco, R-Glenville, speaks at a rally in front of the state Capitol in Albany on Thursday to commemorate the one-year anniversary of the state’s controversial Health Department memo that permitted COVID-positive patients to return to congregate facilities. Kate Lisa/Johnson Newspaper Corp.

Cindy Lizzi, left, with brothers Ted and Phil Minissale, pose in front of the state Capitol in Albany on Thursday with white roses and a photo of their mother, Agnes, to remember her and the New Yorkers who died from COVID-19 in congregate facilities. Kate Lisa/Johnson Newspaper Corp.

ALBANY — Dozens of family members and friends of loved ones who died from COVID-19 in nursing homes joined lawmakers outside the state Capitol on Thursday to mourn the thousands of New Yorkers who died in congregate facilities and designate a statewide day of remembrance in their honor.

Officials and activists gathered on the one-year anniversary of the state Health Department’s controversial March 25, 2020, memo, which allowed COVID-positive residents to return to their nursing homes or congregate care facilities to recover.

The state’s March 25 memo remained in effect until May 10 and is not found on the state Health Department’s website.

“We’re here to speak for someone who cannot speak because of the March 25 mandate of last year,” said Phil Minissale, whose 93-year-old mother, Agnes, died from COVID-19 last April.

Agnes lived in the Teresian House Center for the Elderly in Albany, but died from virus complications in a local hospital.

More than 9,000 patients recovering from COVID-19 last year were discharged from hospitals into the state’s 613 nursing homes.

More than 15,000 New York nursing home residents died from COVID-19 complications since the state’s first official case March 1 of last year, including those outside the facility in hospitals or hospice and presumed virus fatalities when testing was scarce at the start of the pandemic.

The state reported just under 9,000 deaths until Attorney General Letitia James released a report Jan. 23 that the state undercounted the total virus-related nursing home fatalities up to 55%.

“As the attorney general’s report rightly points out, the March 25 Department of Health guidance was consistent with and followed federal guidance issued by the CDC and CMS and was not a directive to accept COVID patients if they could not otherwise provide appropriate care — a point the Attorney General’s Office found the nursing homes understood,” said Gary Holmes, a spokesman with the state Health Department.

The Health Department has conducted more than 2,500 COVID-focus surveys within New York’s 613 congregate facilities since March 1, 2020.

Many families and advocates have said congregate facility staff did not inform them about their loved one’s health or well-being after visitation was first suspended in mid-March. Family members and staff alike have said the facilities were unprepared with Personal Protective Equipment, testing and personnel to successfully keep the virus out.

Gov. Andrew Cuomo, Health Department Commissioner Dr. Howard Zucker and other executive aides have said the March 25 directive was in line with federal guidance and last spring, health personnel discharged virus patients who were expected to recover because of hospital capacity concerns.

“It truly is a day that will live in infamy,” Minissale said standing beside siblings Ted Minissale and Cindy Lizzi while holding white roses and photos of their mother.

“Fifteen-thousand people, including our mom, passed away because of the mandate given by this governor. It’s inexcusable. It’s not right,” Phil Minnisale said.

“This mandate on March 25 ruined so many lives,” Lizzi added during the West Capitol Park rally Thursday morning. “Our hearts are broken forever.”

Senate Republicans announced a resolution Thursday to recognize March 25, 2021, as We Care Remembrance Day. The measure was referred to the Finance Committee on Wednesday.

Sen. Sue Serino, R-Hyde Park, said it was important to pause to honor the legacies of thousands of New Yorkers who lost their lives.

“These residents were so much more than numbers on a state spreadsheet,” Serino said Thursday. “These were real people with real lives whose deaths should not be in vain. It is in their memory that we continue the fight for justice and for better policies to ensure that no one else ever has to suffer the way these families have.”

The U.S. Attorney’s office in the state’s Eastern District continues to investigate the work of several senior members of the governor’s state Coronavirus Task Force and the potential intentional withholding, or altering, of public information.

The state attorney general and federal investigations are ongoing.

Assemblyman Jake Ashby, a member of the chamber’s Health and Aging committees, said he hopes the ongoing probes shed light on the administration’s decisions and provides grieving families with closure.

“I truly hope that the federal investigation that’s going on will provide justice to these families — that’s my sincere hope,” said Ashby, R-Castleton. “We’ve only heard from a few families ... I know I’ve heard several from my constituents. Compounded with other restrictions going on at the time, it makes it that much harder.”

The Senate and Assembly passed legislation over the last several weeks to reform the oversight and transparency, quality improvements and protection from liability in state nursing homes and curb abuse of for-profit facilities.

Cuomo and Zucker have both said the governor will not sign the state’s upcoming budget, due April 1, without sweeping reforms to the nursing home industry to prioritize patient care over profit, increase data transparency and hold bad actors accountable.

Ashby, who worked in health care and nursing homes throughout his career, voiced support for the updated congregate facility staffing requirements, but added Thursday other reforms are necessary, as some families did not know their loved one was being transferred to a different facility or hospital at the height of the pandemic last year. Some miscommunication happened because of conflicting internal policies, he said.

“I can’t imagine that, as a family member, not knowing my loved one went to a different facility from where I lived for whatever reason, whether the reasons were valid or not,” Ashby said. “The fact that they don’t know speaks volumes to the challenges the industry is facing and, really, a lack of leadership in some cases.”

Cuomo and his administration argue they did not intentionally underreport the state’s number of nursing home deaths, but paused gathering congregate facility data that the state Legislature requested August because of the Justice Department’s inquiry.

Representatives from Cuomo’s office did not return requests for comment.

“Today, I sat and cried like a baby,” Sen. Daphne Jordan, R-Halfmoon, said of the families who shared personal stories. “I feel for them. They want justice to be done and I’m with them on that.”

“The investigation must continue on,” Jordan continued. “We’re very anxious to see the results of that and would hope it goes to a conclusion soon so that we could learn from this and those who have a price to pay, pay it.”

Nursing home workers were scheduled Thursday afternoon to lay 150 carnations to represent the 15,000 resident lives lost to COVID. Memorials were scheduled for many areas across upstate in addition to Albany, Harlem, Hicksville and Peekskill.

Lawmakers on both sides of the political aisle have called for an independent investigation with subpoena power demanding answers about the March 25 decision. Sen. Jim Tedisco, R-Glenville, has sponsored legislation for the Legislature to begin a separate probe since late last summer.

Tedisco blasted Cuomo on Thursday, saying the governor distorted the truth and reality about the state’s handling of the public health emergency while he wrote and published “American Crisis: Leadership Lessons from the COVID-19 Pandemic” about New York’s success in fighting the virus.

“He was writing a book about being a COVID slayer — he actually was and became and is a COVID purveyor,” Tedisco said. “It’s important to never forget. This particular day, we can never forget.”

No one will accuse you of having any sympathy for the deaths. Sad.. Cuomo’s cover-up as admitted by the governor’s top aide is another issue that deserves legal action.

If you can get on this band wagon now is your chance. In America everybody wants a check and its a cinch when the guy to blame is the governor of your state. Hope you got good insurance governor here come the leaches. The one I like is "my 95 year old mother died of the corvid" and Andy Cuomo could have prevented it, (para phrasing).