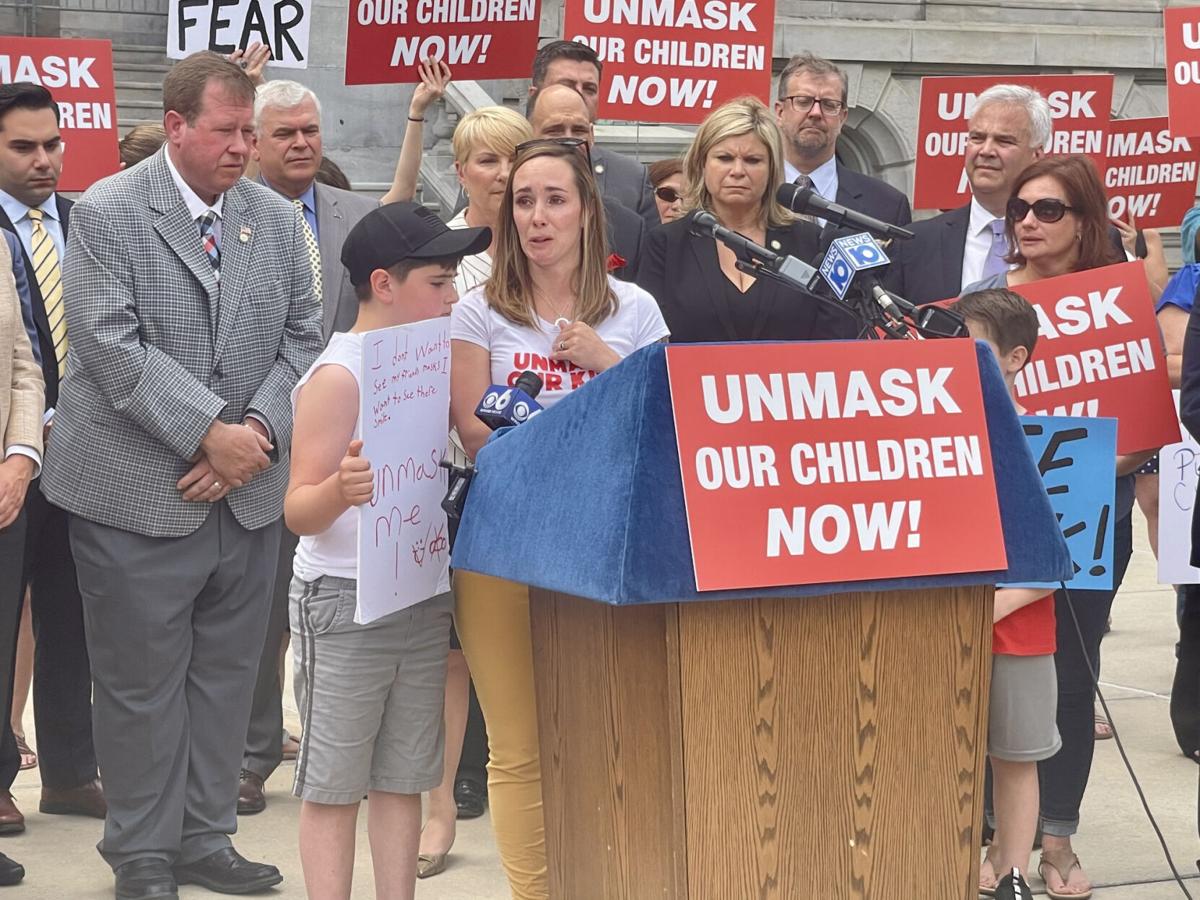 Melissa Jones’ voice cracked with emotion as she spoke outside the state Capitol in Albany on Wednesday to argue against mandates for children to wear masks in school. She urged lawmakers to pass legislation to make wearing a mask a personal choice. Kate Lisa/Johnson Newspaper Corp. 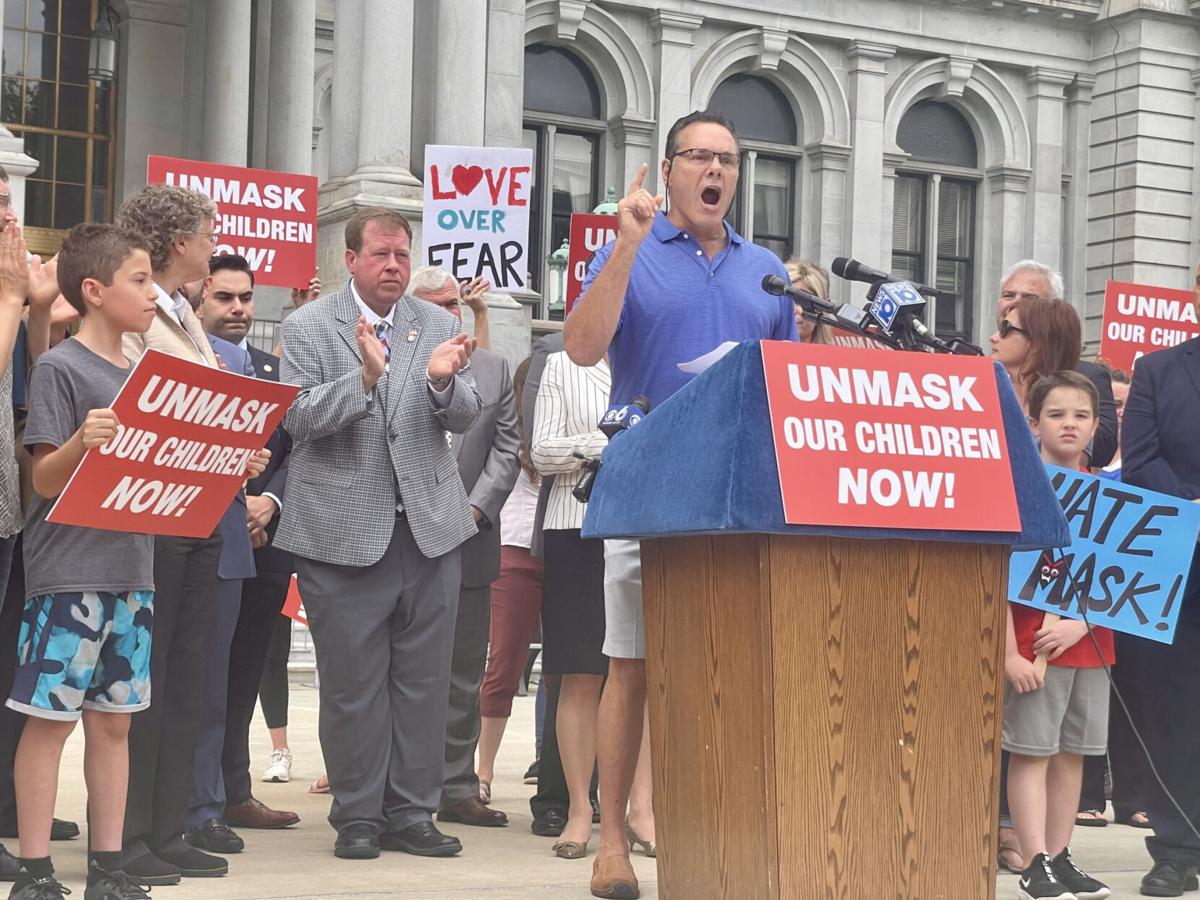 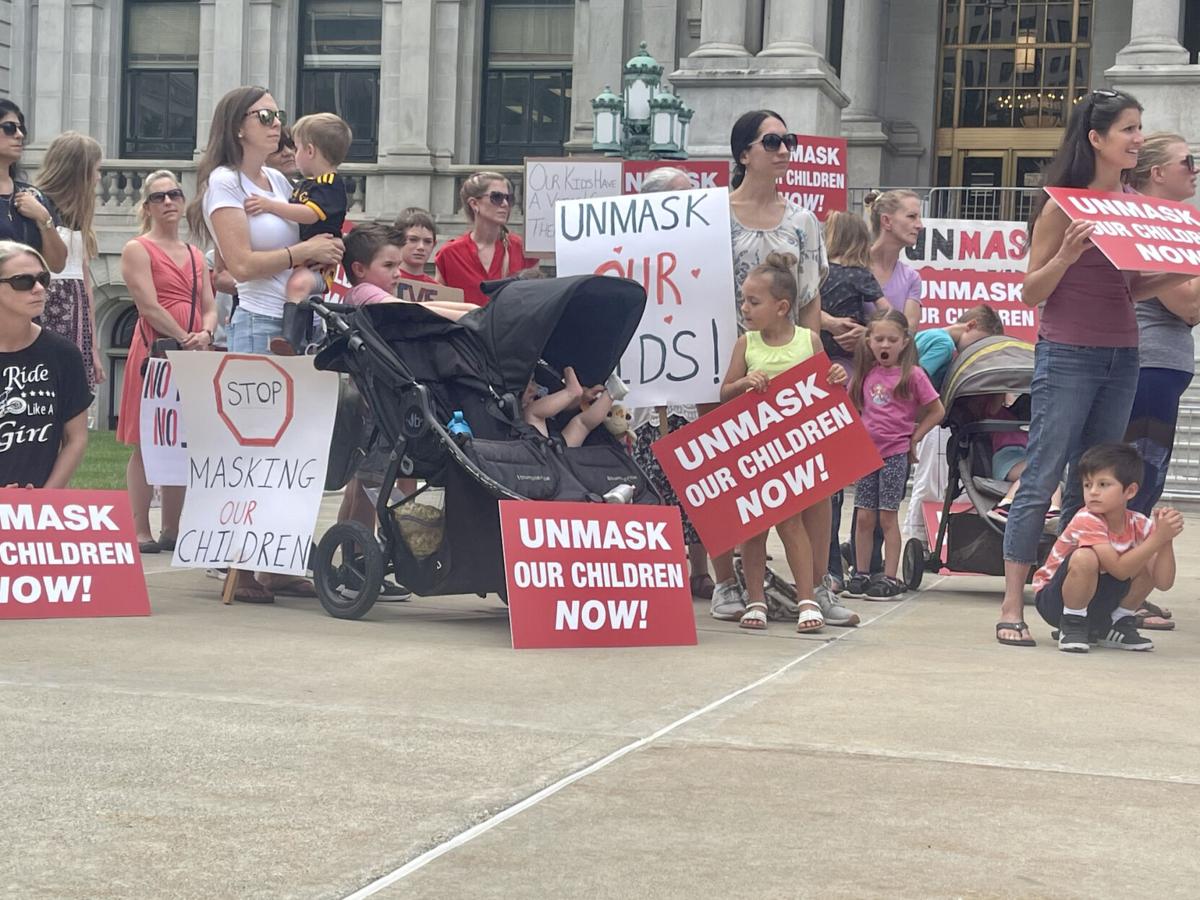 Mothers rallied with their young children outside the state Capitol in Albany on Wednesday to plead with Gov. Andrew Cuomo and state officials to no longer require children to wear masks. Kate Lisa/Johnson Newspaper Corp. 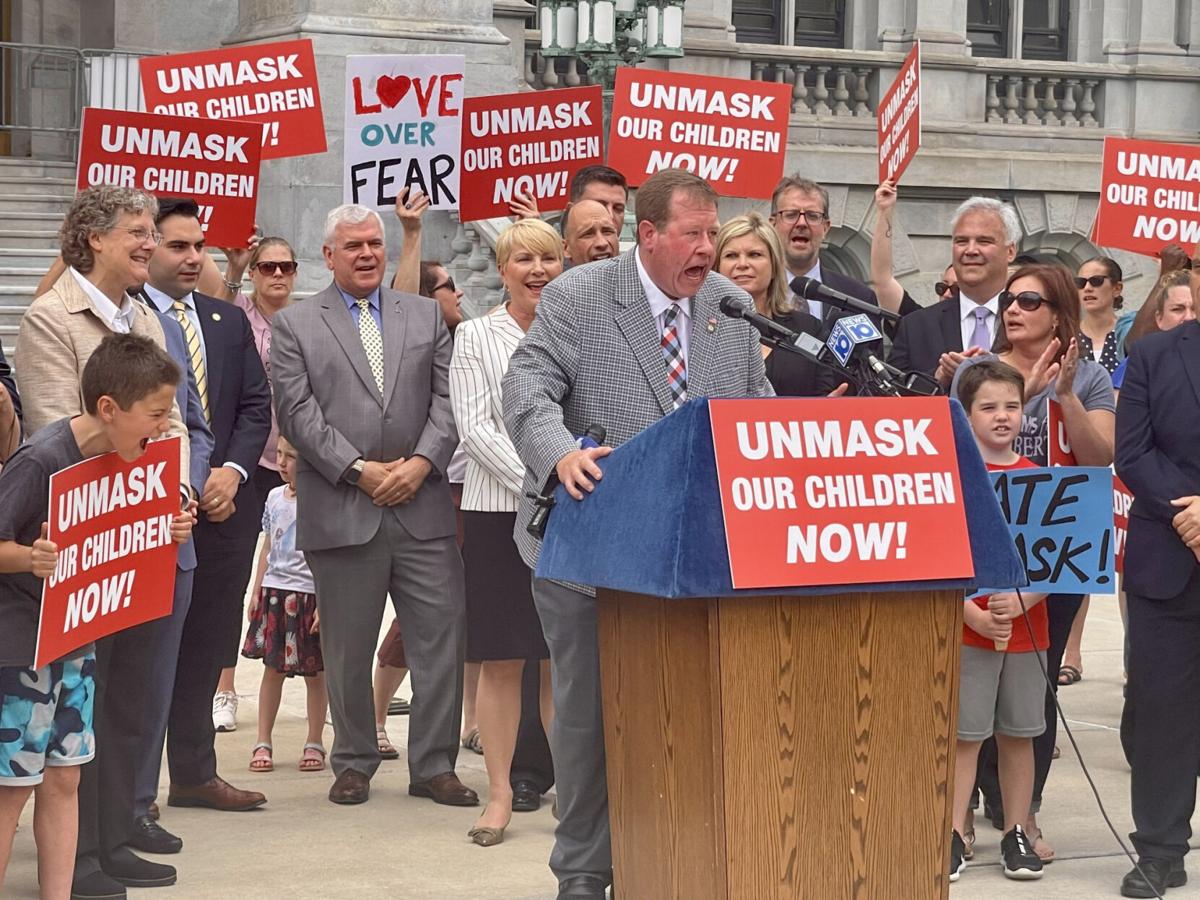 Assemblyman Chris Tague, R-Schoharie, leads a group outside the state Capitol in Albany on Wednesday in shouting “Unmask our kids now!” so Gov. Andrew Cuomo and other state officials could hear their cries. Kate Lisa/Johnson Newspaper Corp.

Melissa Jones’ voice cracked with emotion as she spoke outside the state Capitol in Albany on Wednesday to argue against mandates for children to wear masks in school. She urged lawmakers to pass legislation to make wearing a mask a personal choice. Kate Lisa/Johnson Newspaper Corp.

Mothers rallied with their young children outside the state Capitol in Albany on Wednesday to plead with Gov. Andrew Cuomo and state officials to no longer require children to wear masks. Kate Lisa/Johnson Newspaper Corp.

Assemblyman Chris Tague, R-Schoharie, leads a group outside the state Capitol in Albany on Wednesday in shouting “Unmask our kids now!” so Gov. Andrew Cuomo and other state officials could hear their cries. Kate Lisa/Johnson Newspaper Corp.

ALBANY — Melissa Jones has had enough.

A Cobleskill mom of two children, ages 9 and 4, Jones’ eyes filled with tears Wednesday morning while speaking at a podium in West Capitol Park.

“I asked (my son) what he thought about not wearing a mask in school and taking a stand,” Jones said. “He said, ‘Yeah, let’s do it, Mommy!’ A minute later, he said, ‘Mommy, I can’t do that. I’ll be the only one and I’ll get yelled at. I tried taking my mask off when I couldn’t breathe and I got yelled at.’

“That literally broke my heart,” she added.

Jones was one of dozens of parents who gathered outside the Capitol on Wednesday to push Gov. Andrew Cuomo and state representatives to rescind all mask mandates and especially remove facial covering requirements for school-aged children.

“On Monday, it was 97 degrees out — most sat in their schools, most with no air conditioning, on the second and third floors forced to wear masks,” Jones said. “That is abuse. ... Getting yelled at for pulling your mask down when it isn’t a mask break is abuse. Wearing a mask for hours a day under no medical supervision is abuse.

“Enough is enough,” Jones continued. “Everyone has the right to free, fresh air. Our kids can’t speak for themselves. We are their advocates. They deserve better.”

Several parents and child caretakers argued that masks distract young children from learning and prevents students who are hearing impaired from developing social skills or communicating with their teachers.

Jeff Thomas, a father of four who lives in Knox, in western Albany County, founded the Facebook group Unmask New York School Children Now to organize the effort with other parents and advocates statewide. The group had more than 3,400 members Tuesday night. Membership swelled to more than 9,000 members as of 9:30 p.m. Wednesday.

“The pandemic has affected us all, and it’s taken the most toll on our beautiful children,” Thomas said, adding the state’s ongoing mask mandate has negatively impacted kids. “We’re finally experiencing an end to the pandemic and return to normal life ... then why are our children still required to wear masks in school?

“Our children are forced to wear a mask and live in a constant state of fear,” he added.

Data shows the coronavirus transmission rate among school-aged children is minimal, and the risk for spread remains low.

Others noted the state’s rate of new COVID-19 infections is one of the lowest in the United States, making mask mandates and other pandemic-era rules obsolete.

“Can you imagine being forced to wear a mask indoors when it’s 96 degrees out?” Thomas asked the crowd, adding most schools do not have air-conditioning. “If any of our cars break down with no air conditioning, we call AAA. We can’t do it, so why are we making our kids do it?”

New York’s coronavirus infection rate is 0.48% over a seven-day average, and has declined for 65 days straight. The daily infection rate declined to 0.37% on Wednesday — the lowest percentage since the pandemic began more than 15 months ago.

Assemblyman Chris Tague, R-Schoharie, introduced legislation Wednesday to prevent state agencies from mandating mask-wearing requirements for healthy children under the age of 18 and rescind the current rules in place in schools, summer camps and similar settings.

Tague has received countless calls from parents and school administrators confused and angered by the state’s inconsistent mask policies, and continued requirements for young children while in the classroom.

“It’s time for parents to once again be empowered to make decisions for their children,” the assemblyman said. “They know better than any politician or bureaucrat in Albany. ... Being part of being an American is having a choice and living by the Constitution, and many (parents) feel their constitutional rights have been infringed upon. Let the parents and businesses make their own decisions.”

Tague’s bill was not assigned a bill number as of press time.

The state’s mask mandate was lifted in indoor and outdoor public spaces starting May 15. All New Yorkers over the age of 2 were legally required to wear masks or facial coverings in public since mid-April 2020.

Kindergarten through 12th-grade students in the state’s 700-plus public school districts do not have to wear masks while outdoors, but facial coverings continue to be required for indoor use. The same rules are in effect for summer camps.

Assemblyman Andy Goodell, R-Chautauqua, noted lawmakers are continued to be required to wear masks on the floor of either legislative chamber, but not in stores or businesses.

“Our kids do not need to grow up in a hospital environment — they need to be kids,” Goodell said.

As long as democrats are in charge our lives will be less free. "Absolute power corrupts absolutely." We have given away too much power and now have to fight to get it back. "They" don't want to let go. The Backlash Movement has begun.