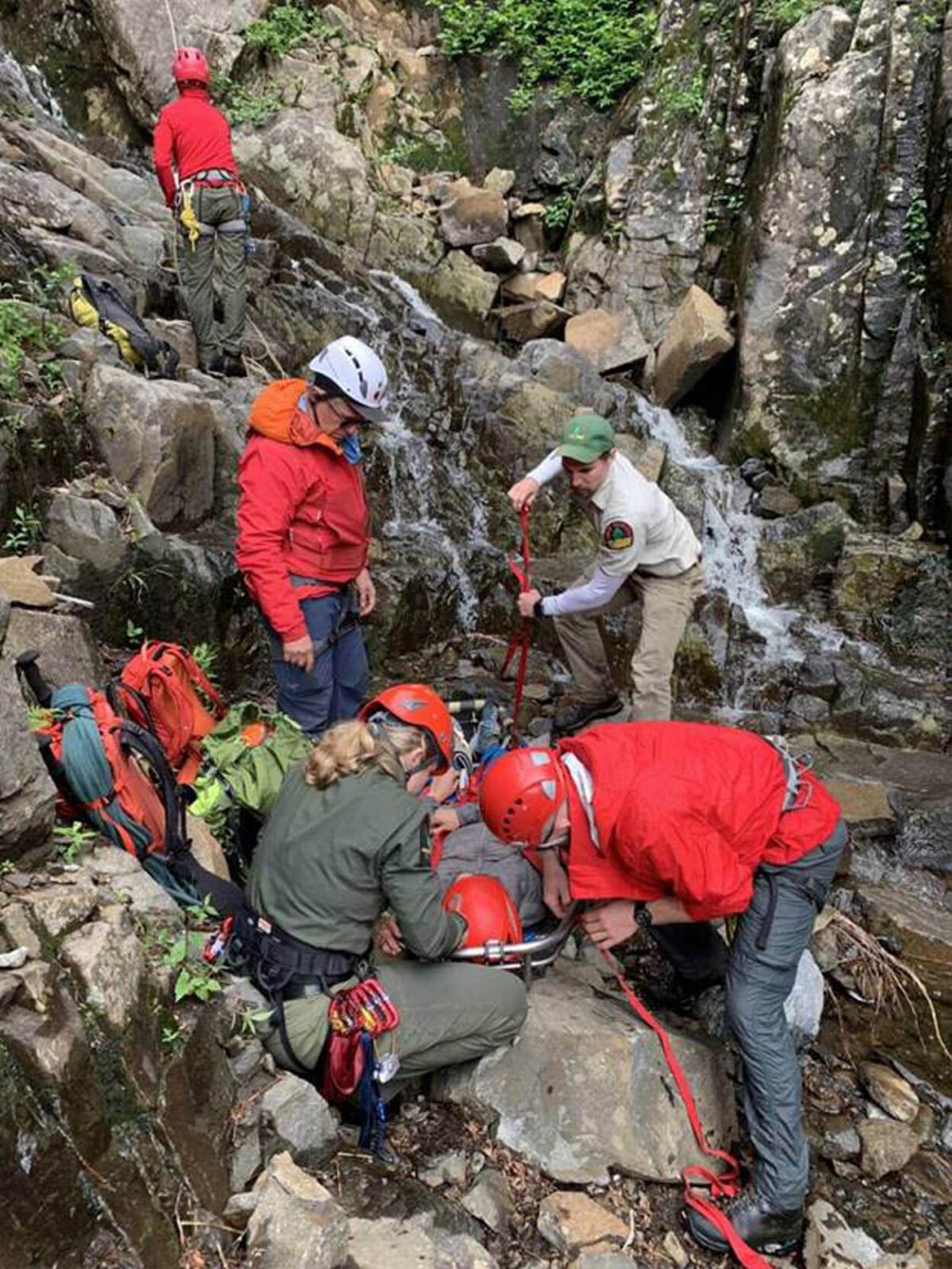 Forest rangers and other rescue crews used ropes, a stretcher and a helicopter to evacuate a woman who was injured while hiking the Trap Dike on the Fourth of July. Photo courtesy of State Department of Conservation 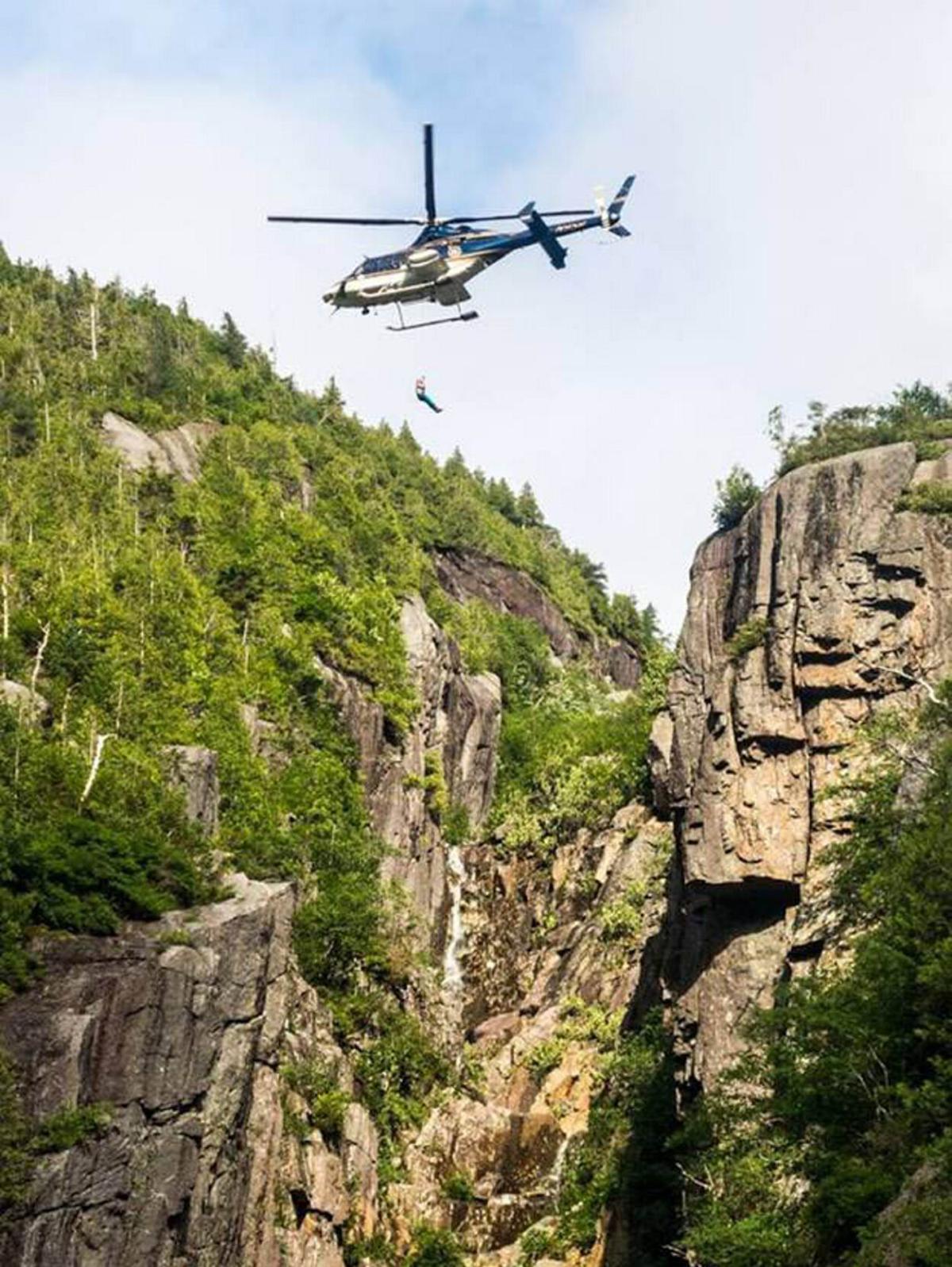 A New York State Police Aviation Unit helicopter arrives to assist with the Trap Dike hiker rescue on the Fourth of July. Photo courtesy of State Department of Conservation

Forest rangers and other rescue crews used ropes, a stretcher and a helicopter to evacuate a woman who was injured while hiking the Trap Dike on the Fourth of July. Photo courtesy of State Department of Conservation

A New York State Police Aviation Unit helicopter arrives to assist with the Trap Dike hiker rescue on the Fourth of July. Photo courtesy of State Department of Conservation

Over the Fourth of July weekend, forest rangers with the state Department of Environmental Conservation rescued an injured hiker at the Mount Colden Trap Dike, helped an injured hiker off Seward Mountain and put out a half-acre wildland fire in the town of Schroon.

Forest rangers used a helicopter, ropes and a stretcher to rescue an injured hiker from the Mount Colden Trap Dike in the High Peaks on the Fourth of July.

The female hiker, 59, of Greenwich, Conn., had fallen and suffered a lower leg injury. Two other climbers in her group going up the Trap Dike called the rangers.

Rangers reached the woman at 5:30 p.m., stabilized her injury and developed an evacuation plan.

The responders established a steep-angle belay system, lowering her approximately 100 yards down the slope to a location better suited for a hoist extraction.

At 6:15 p.m., State Police Aviation returned with Ranger Chris DiCintio, and the woman was hoisted from the Trap Dike and transported to a local hospital for further medical treatment.

“Past accidents within the Trap Dike have resulted in significant injury and unfortunately the loss of life,” DEC Region 5 Forest Ranger Captain Chris Kostoss wrote in an email. “In addition to rock climbing ability, this route requires expert route-finding skills, risk mitigation and self-rescue techniques. Forest rangers strongly recommend the use of an experienced rock climbing guide for those who wish to climb this route, especially the first time.”

Kostoss also warned against gathering knowledge of routes and conditions from “crowd-sourced applications.” He said these sources “may underestimate the complexity of this and other routes, particularly during inclement weather.”

“Even a seemingly minor injury on this route will be greatly magnified in severity due to the extended duration required to safely execute a rescue,” Kostoss wrote. “Plan ahead, prepare and think twice before attempting the Trap Dike without an expert present.”

On July 3, forest rangers helped a 53-year-old man from Glens Falls with a weight-bearing knee injury on Seward Mountain get out of the High Peaks Wilderness Area. DEC got the call at 7:30 p.m. and after speaking with the injured hiker, Forest Ranger Chris DiCintio advised the injured hiker and his partner to continue down the herd path while he and Rangers Robert Praczkajlo and Hannah O’Connor responded with two all-terrain vehicles.

The hikers made it down the trail to the rangers and were driven out to the rangers’ trucks. The hikers were given a courtesy ride back to their vehicle and all units were clear of the scene at 11:15 p.m.

On July 3, forest rangers fought a half-acre wildland fire in the town of Schroon.

At 3:50 p.m., Assistant Forest Ranger Cleinman located a fire while on routine patrol near a lean-to at Pharaoh Lake in the Pharaoh Lake Wilderness Area.

At that time, the fire, which was determined to have been started by a campfire, was approximately 100 by 100 feet in size and smoldering with no active flames.

Forest Rangers Marie Arnold and Charles Kabrehl responded by all-terrain vehicle with a pump and hoses.

The fire was safely contained due to rain. The next day, two rangers and an assistant forest ranger returned to patrol the grounds. On July 5, at 4:11 p.m., Kabrehl declared the fire was out.