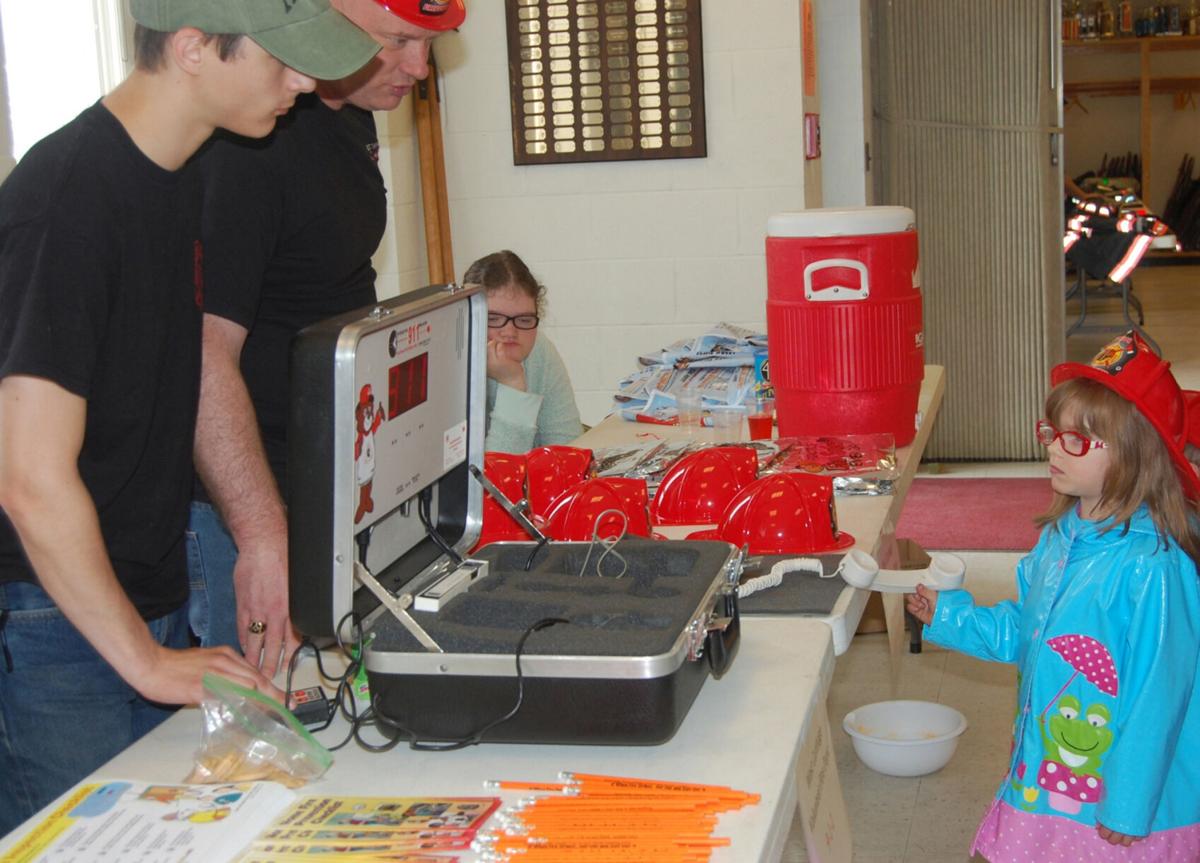 Utilizing a 911 simulator, deputy fire prevention officer Don Korpi and Zach Jones, Of the West Carthage Fire Department talked to children including Chloe Kramer, 5, about what to do in a fire emergency. Elaine M. Avallone/Johnson Newspapers 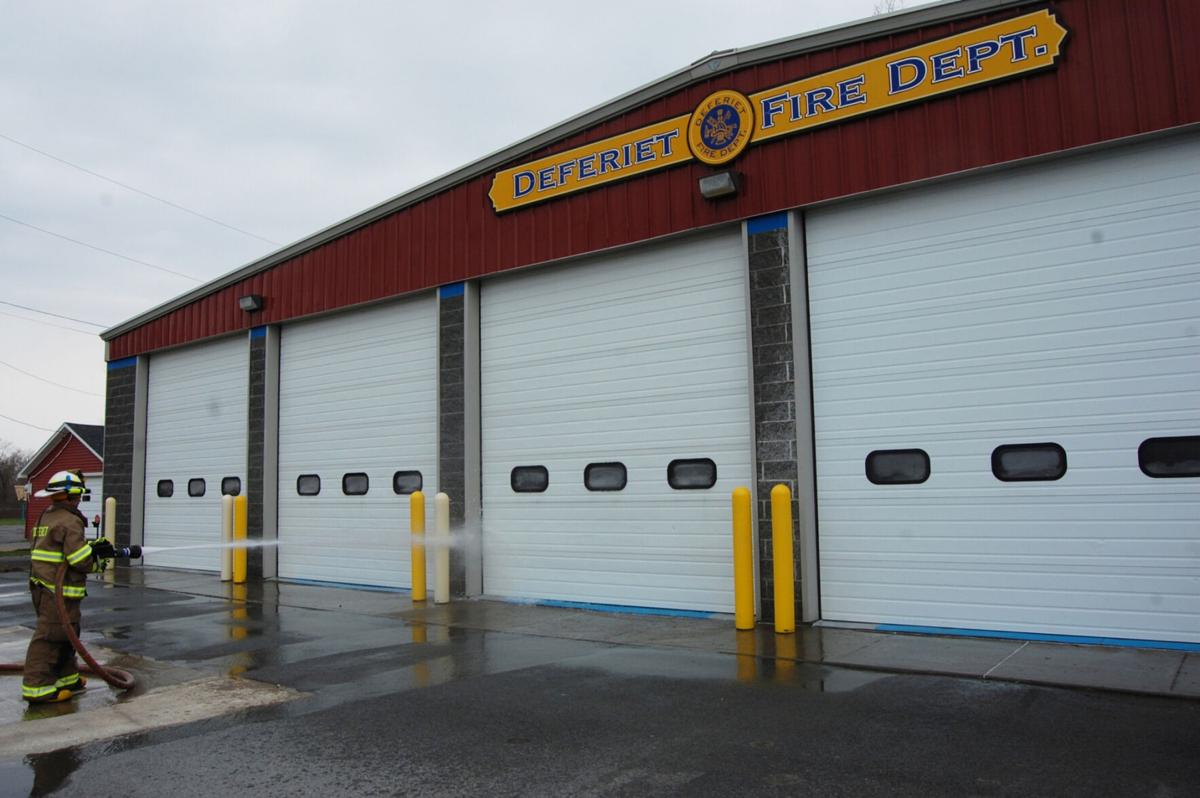 Utilizing a 911 simulator, deputy fire prevention officer Don Korpi and Zach Jones, Of the West Carthage Fire Department talked to children including Chloe Kramer, 5, about what to do in a fire emergency. Elaine M. Avallone/Johnson Newspapers

Since 2011, the Firemen’s Association of the State of New York host conducted a RecruitNY Campaign encouraging volunteer fire departments statewide to host open houses and events to create public support and recruit volunteers.

FASNY has designated April 24-25 as the 12th annual RecruitNY Weekend.

“In response to COVID-19, many firehouses across the state are choosing to organize a virtual open house or conduct other digital outreach in an effort to attract new volunteers,” states a news release from the organization. “Some firehouses, based upon local conditions, may still elect to open their doors to the public.”

The FASNY statement points out that “today’s firefighters are responding to more calls now than ever before, and these calls are increasingly diverse, between medical emergencies and COVID-19 calls to flooded basements, downed power lines, automobile accidents, and of course for fires. The pandemic has also added challenges surrounding training and new member recruitment.”

According to FASNY, more than 600 fire departments across the state held recruitment open houses in 2019 but due to the pandemic the RecruitNY Weekend was canceled last year.

“Hundreds of volunteer fire departments across New York will be participating in RecruitNY. We invite all New Yorkers to attend an open house and safely experience what it means to be a volunteer firefighter,” said FASNY President John Farrell. “After the year we have been through, RecruitNY weekend can provide people with the opportunity to interact with the responders who are dedicated to protecting them.”

For more information, contact your local volunteer fire department via a non-emergency phone number or its website.

Some fire departments have opted out of the statewide event.

The Carthage Volunteer Fire Department has plans in the works to host an open house at a later date.

Acccording to Steve Heeren, first assistant Chief of the of the Felts Mills Volunteer Fire Company Inc., the event will not be productive for them.

“We are not participating with RecruitNY this year because we feel that it has not helped us as we have not had any applicants come by physically or virtually to the department due to those events,” he said.

However, postings on Facebook have resulted in “a significant increase in membership over the last year.”

“Not only have we but when someone from Carthage messages us, we are able to get them in touch with their local department to volunteer,” Mr. Heeren said. “It really has been a great recruiting tool.”

As a former military member, Mr. Heeren stresses the importance of volunteering.

“As someone who volunteered for my country, I believe it is important to volunteer with my local community,” he said. “It continues to give me a sense of importance to help my community. It also fulfills my need of comradery that I do not have since I left the military over 10 years ago.”

He noted several positions besides interior firefighters are needed to make the firehouse complete.

“The community depends on us to come when there is an emergency and not everyone is available at the same time,” he said. “We will always need interior firefighters but in general, we need everyone, be it scene support or help with a fund raiser.”

The company which covers the hamlet of Felts Mills and the northern portion of the town of Rutland, has 26 active firefighters and typically responds to 150 to 170 calls a year.

The West Carthage Fire Department will be holding activities both days of the RecruitNY weekend.

The department, established in 1896, covers the village of West Carthage and towns of Champion and Denmark with 49 active members of which 16 are interior firefighters. The department responds to an average of 215 calls per year.

Chief Peter Crump Jr. said volunteering is the “right thing to do.”

“We need to give back to the community where people gave back to us,” the chief said. “Now there is more of a need than ever to give back with tight budgets and money is tight.”

Deferiet fire chief Troy Babcock agreed, “It’s important to volunteer to help your community. Any kind of help is greatly appreciated like auxiliary members, pump operators, fire police, exterior fire fighter, drivers and ems. There is a job for everyone.”

The department covers the village of Deferiet part of 3A and the hamlet of Herrings, responding to 170 to 300 calls a year.

“It’s very important for the public to know who is responding to their house,” he said. “It helps them understand the job.”

He also said the department “relays heavily on volunteer, calls could go unanswered.”

The department which responds to 100 to 130 calls annually covers the village and a portion of the town of LeRay. There are 30 active members including 21 interior firefighters in the department.

Visit with Sparky the Dog