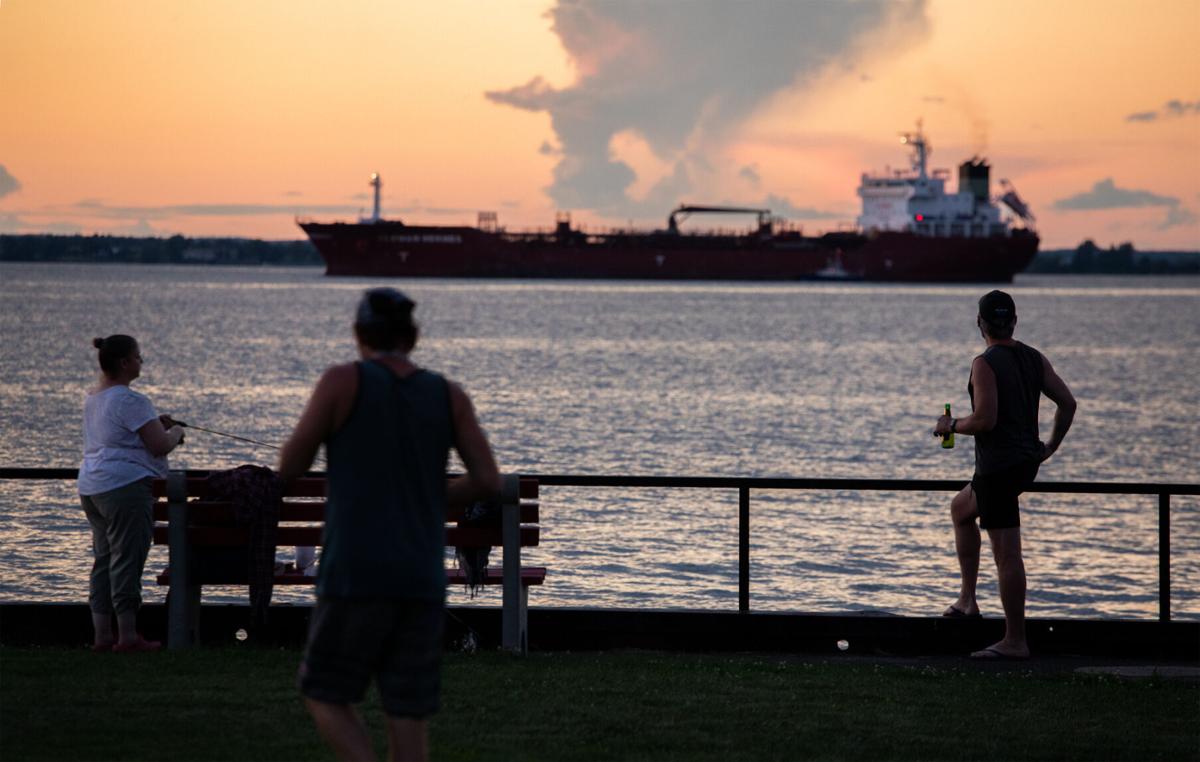 Near the eastern end of Lake Ontario, a freighter travels the St. Lawrence River at Cape Vincent on July 30. Zbigniew Bzdak/Chicago Tribune 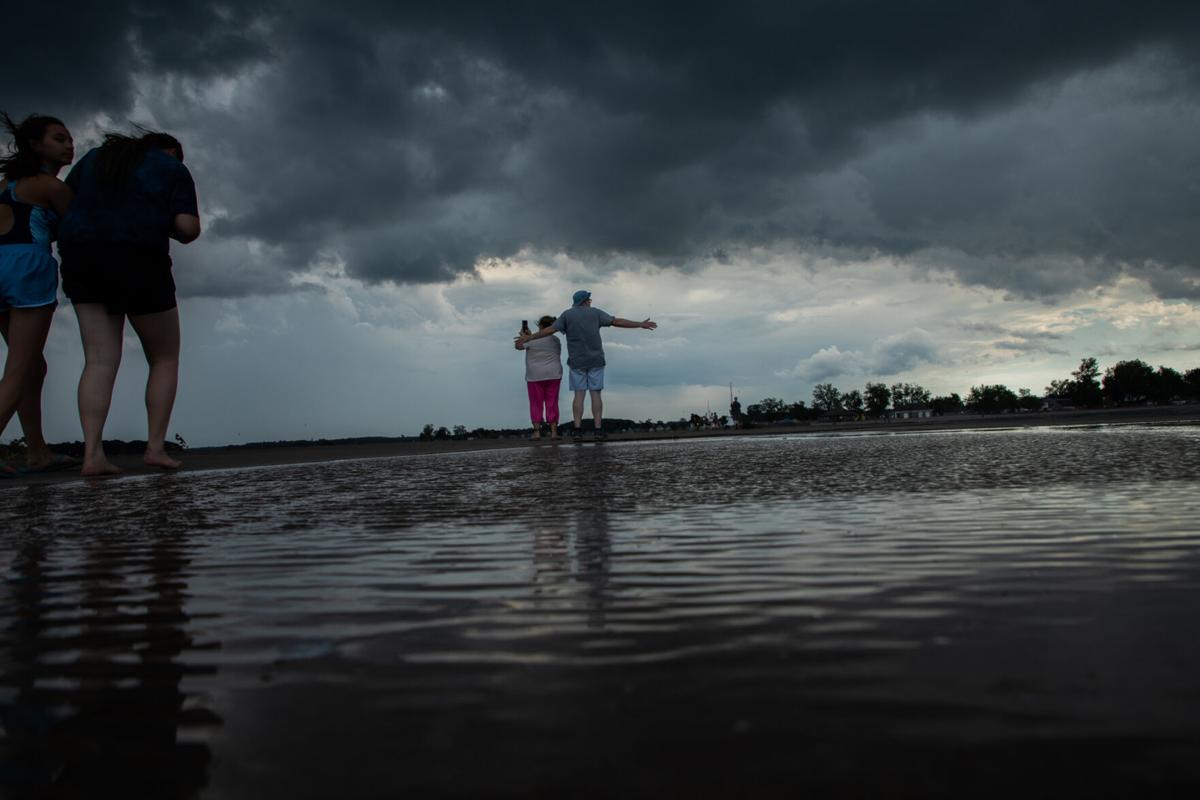 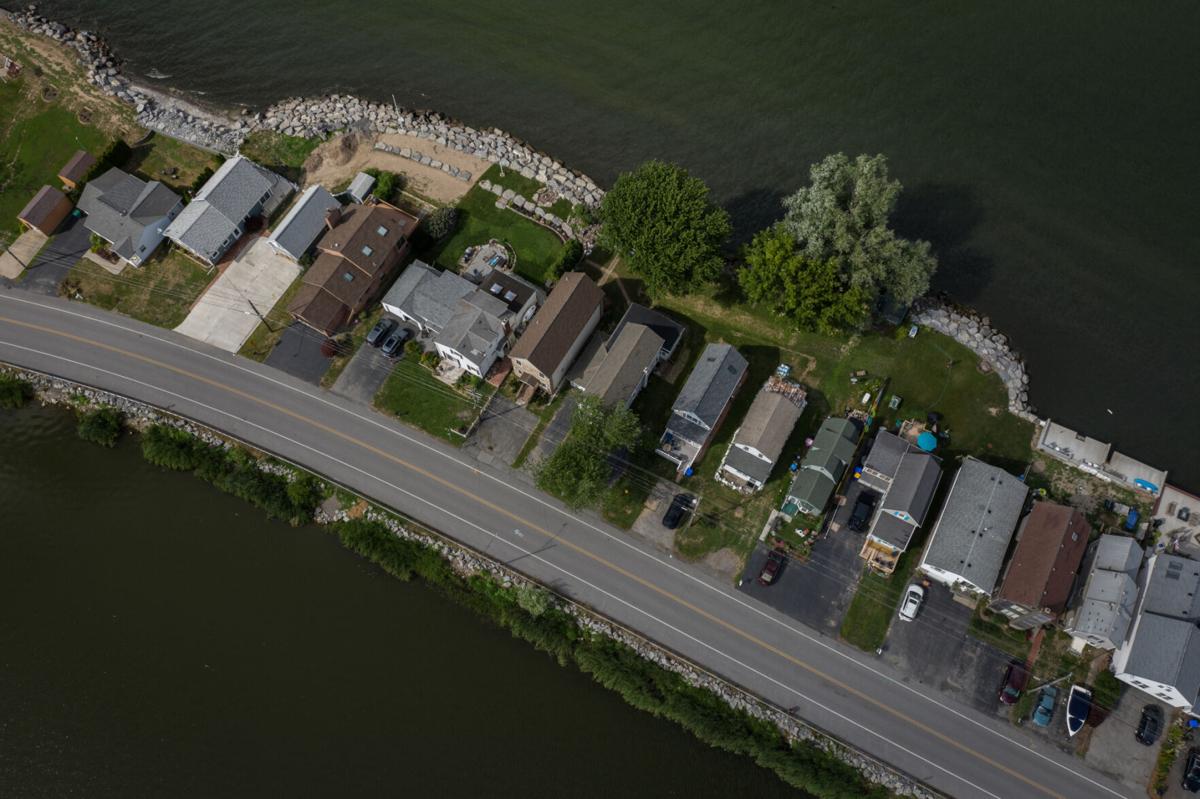 The houses along Edgemere Drive on Lake Ontario and Cranberry Pond in Greece are shown on July 28. Homeowners here have paid to put large boulders in front of their properties to prevent erosion. The area is particularly susceptible to flooding because it receives storm surges from Lake Ontario to the north and flooding from a series of coastal ponds to the south. Zbigniew Bzdak/Chicago Tribune 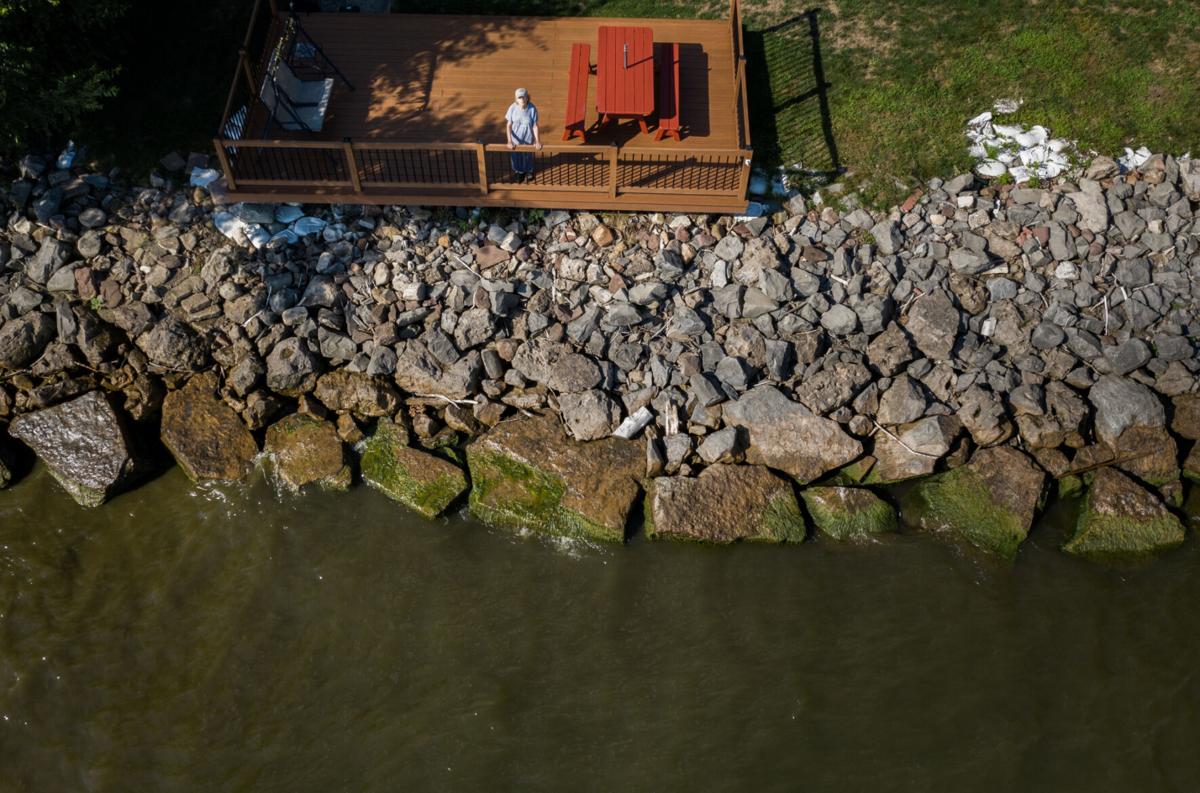 Nancy Sullivan is shown at her house along the shore of Lake Ontario at Edgemere Drive and Buck Pond in Greece on July 30. She has lived at this house for the past 55 years and recently spent some of her retirement money to repair her seawall. Zbigniew Bzdak/Chicago Tribune

GREECE — Lake Ontario is more swamp than mighty Great Lake at the edge of Braddock Bay, where 15-foot cattails rustle in the breeze.

The wetland is thick with the giant invasive plants. They stretch from the coastal forest into the bay, obscuring the view of the choppy open water beyond the peninsula that shields the calm inlet.

Somewhere among the cattails is wetland scientist Rachel Schultz, tromping through the soupy muck in knee-high wading boots. She’s talking with graduate student Sarah Kirkpatrick, and while her voice is audible, the wall of vegetation obscures the two scientists from view even though they stand only a few yards off in the marsh.

The Braddock Bay ecosystem where Schultz and Kirkpatrick are conducting a series of studies is a prime example of how climate change and fluctuating levels on Lake Ontario have altered the shoreline habitat. Only minutes away from the residential neighborhoods of Rochester and its suburb Greece in Monroe County, the marshland on the central Lake Ontario shore provides a series of clues about how more precipitation, warmer temperatures and a historically high lake have changed the natural environment.

Great Lakes wetlands like the ecosystem in Braddock Bay are particularly susceptible and have been lost at a higher rate than other types of ecosystems, Schultz said. Throughout the Great Lakes basin, about 70 percent of wetlands have vanished, and coastal areas in particular have lost 50 percent of their wetlands, mainly because of urban development and agriculture.

The cattails are one of the most noticeable warning signs of a changing coast. Braddock Bay has been inundated with high water two of the last four years, and while flooding has provided complicated challenges for coastal residents, business owners and the natural shore, the fluctuation of levels and how humans regulate them also alters the wetlands.

While higher highs grab headlines, since the mid-1960s, Lake Ontario also has experienced a lack of low lake levels compared with its Great Lakes counterparts. Man-made regulation of the lake’s outflow reduced some fluctuations in water levels, helping the invasive variety of cattails crowd out other plants better suited for lower water conditions.

The cattails overtake native vegetation, steal nutrients from the soil and emit higher quantities of methane into the air. Their presence also hurts fish like the northern pike, which thrives in marshland channels and uses marsh meadows to spawn and lay eggs. Frogs, toads and turtles also have suffered.

But the effects of the invasive variety of cattails are more than a science geek’s concern. The people who zoom past Braddock Bay on the Lake Ontario State Parkway may overlook the ecosystem’s importance to both the natural landscape and the nearby residential neighborhoods. An altered coastal landscape hurts the wetland’s ability to perform a critical role: serving as a giant sponge. The wetlands buffer the effects of flooding, reduce the destruction of waves and help prevent shoreline erosion.

The cattail eradication is part of the Braddock Bay Ecosystem Restoration project, a collaboration between the New York Department of Environmental Conservation, the U.S. Army Corps of Engineers, the U.S. Environmental Protection Agency, the town of Greece and SUNY Brockport.

Another key element of the project involved the construction of a large natural barrier beach at the entrance to the bay. The stone, sand and vegetation barrier was designed to block storm surges, reduce wave action in the back bay, and protect the vegetation and animal species that thrive in the coastal wetlands. It has the added benefit of attracting shorebirds such as sandpipers and piping plovers.

On a late July visit, birds flocked to the earthen barrier as waves lapped into the stones. Kayakers slipped through the shallow, narrow passageway between the barrier and the finger-like peninsula popular with hikers, fishermen, birdwatchers and bored teenagers.

Before the construction of the barrier beach, about 100 acres of emergent wetlands were lost to erosion over the last 200 years. Now the earthen barrier protects the entrance to the bay.

Schultz, associate professor of wetland science at SUNY Brockport, not far from Rochester, researches how Lake Ontario’s coastal wetlands have been affected by the water level fluctuations. The scientists at SUNY Brockport also are studying how the changed ecosystem has affected climate change and how much the ongoing removal of cattails and ecosystem restoration can reduce methane and increase carbon storage.

“All of this was underwater last year,” Schultz said, pointing to the fringes of the forested marshland, where the trees end and the marsh vegetation takes over.

Lake Ontario hit a record high in June 2019. Schultz turns and points to the silt line on the trunk of one tree, the discoloration where the lake water once was still visible.

It can be difficult for the untrained eye to see from the wooden boardwalk or the marshland trails, but the cattail removal has allowed native marsh plants such as giant bur-reed and common arrowhead to grow and thrive.

These changes have multiple advantages, Schultz said. The cattails emit three times as much methane into the atmosphere as native plants. Restoring the balance to the bay allows for the water to more naturally spill into the wetlands and reduces the amount of gases that contribute to warming temperatures.

Researchers at SUNY Brockport have set up a series of portable greenhouse gas analysis stations in the marsh. These stations will allow scientists to compare the gas emissions in the area treated for cattail removal, the area where cattails remain prevalent, the Cranberry Pond area south of the Lake Ontario shore as well as the natural sedge meadow. Although a full set of data will not be available until 2021, preliminary results so far show the sedge meadow emits significantly less methane.

Schultz emphasizes that the seasonal fluctuations of the lake have been changing over time, with higher highs happening more frequently and lows occurring less often. A chart that shows yearly water levels stretching over decades shows how the line of levels angles upward, with a clear absence of dips on the low end.

While Lake Ontario water levels are tied to the regulation by the International Joint Commission, a binational board of U.S. and Canadian members, Schultz said that “water regulation can’t make lows happen.”

On the flip side, Schultz said, the IJC cannot eliminate the highs.

“It’s just responding to the other inputs of all the other lakes, which are at record highs,” she said.

“Lake Ontario is a Great Lake, and all Great Lakes have fluctuation of water levels,” Schultz said. “There is no normal year. Because normal is a fluctuating water pattern. The normal is to have highs and lows. ... We need to understand that the normal is the fluctuations, not an average year.”

“fluctuations” caused by the Moses-Saunders Dam. That’s what controls the fate of Lake Ontario..

But I saw a snowflake.