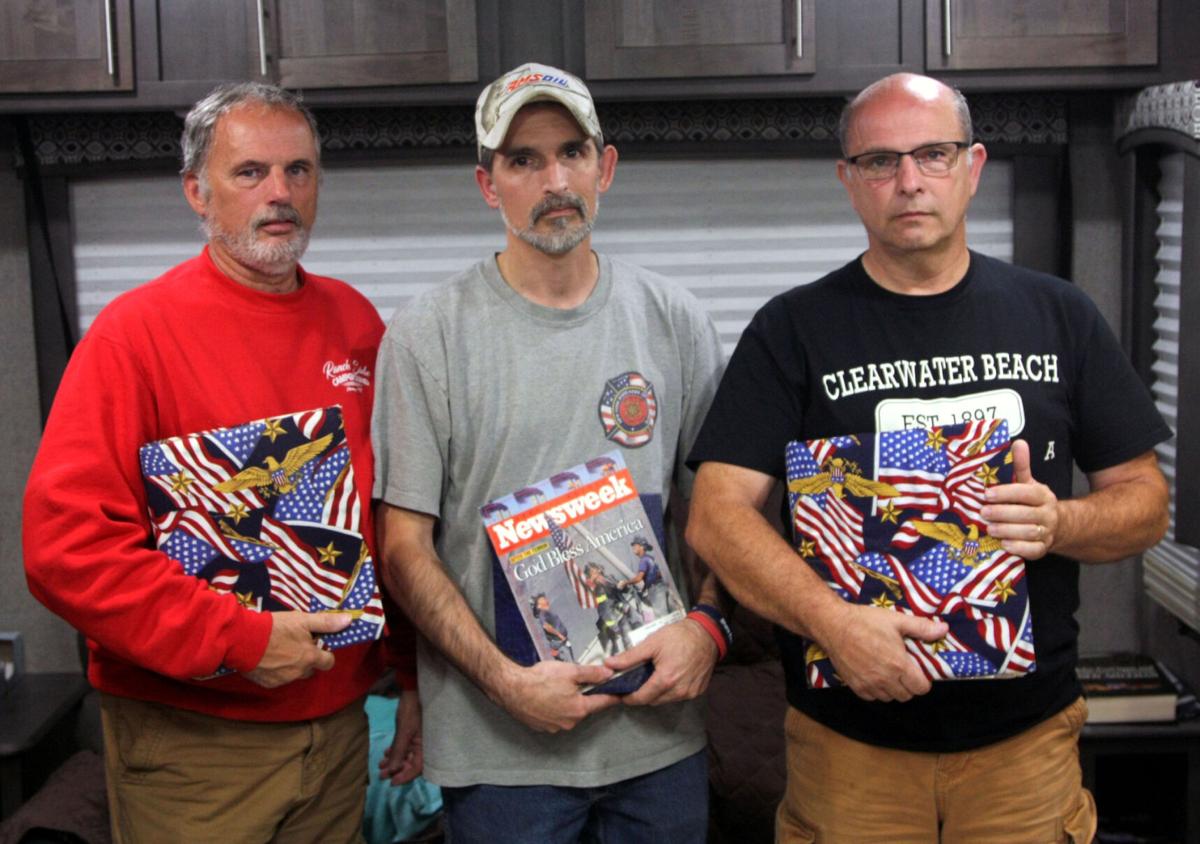 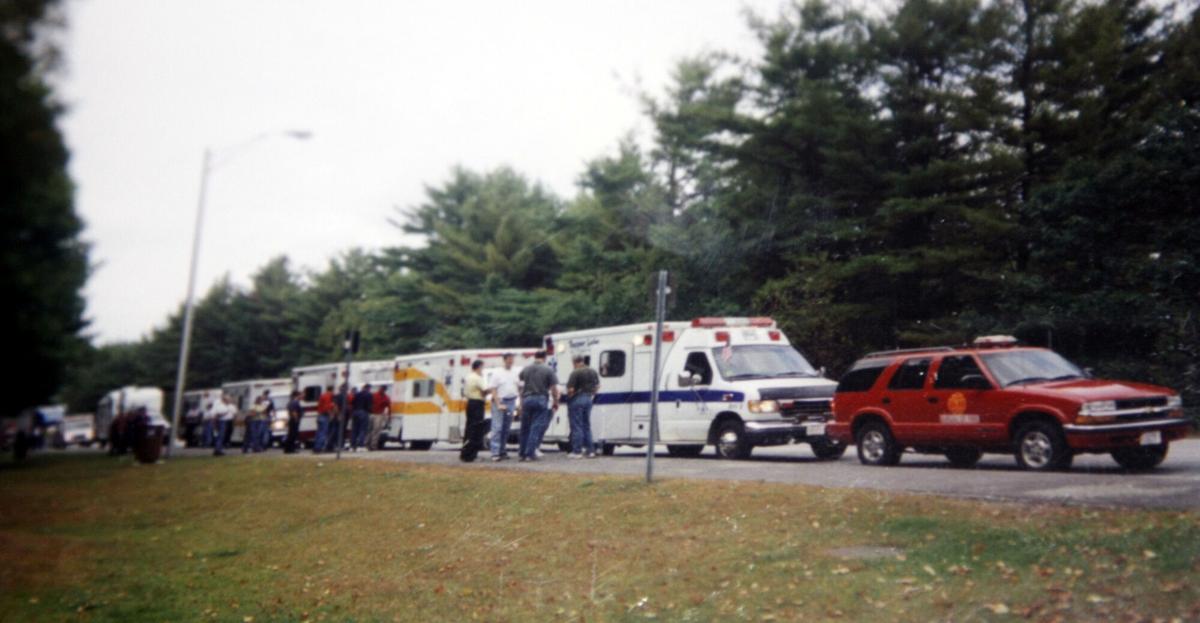 Units gather in Saranac Lake to begin their departure south into the city. Photo credited to Darwin Trombley 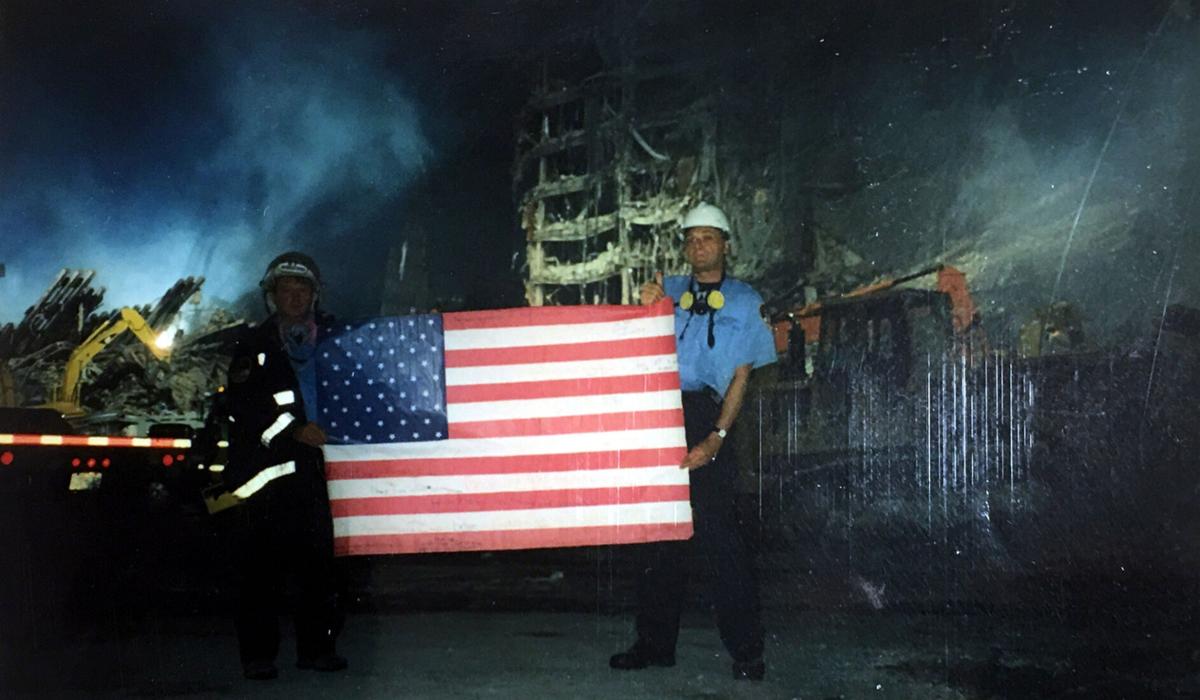 Lt. Sullivan, left, and an unidentified EMS lieutenant hold flag received by school children from Glens Falls, in front of the remains of Tower 2. Photo credited to Darwin Trombley 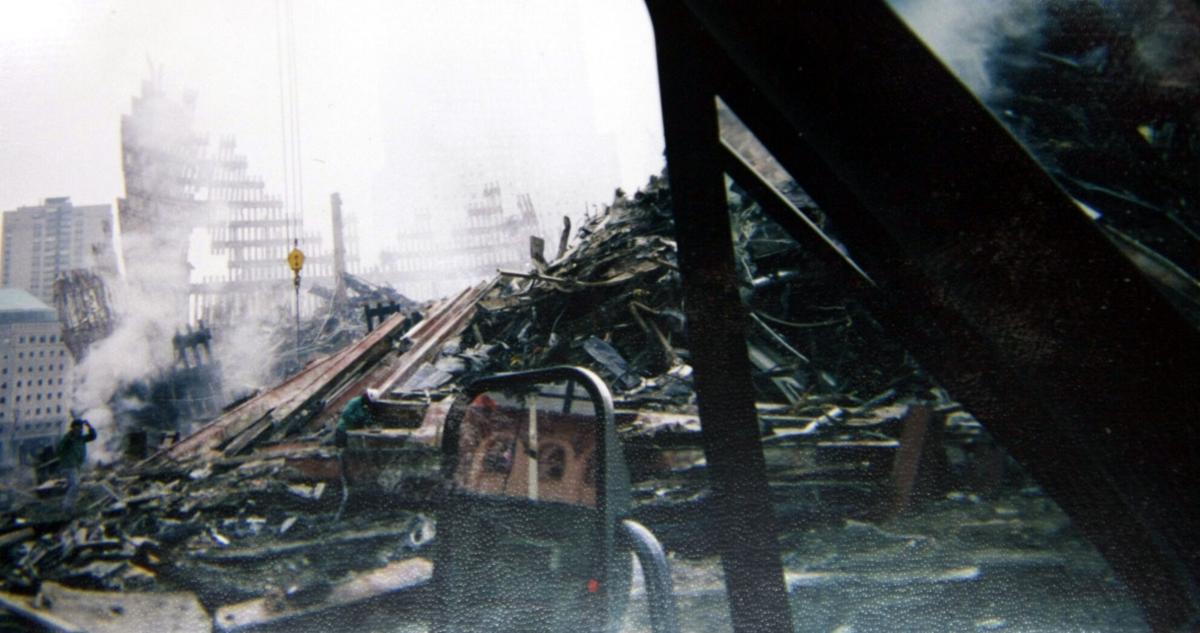 The WTC2 facade stands next to the “pile.” Photo credited to Darwin Trombley 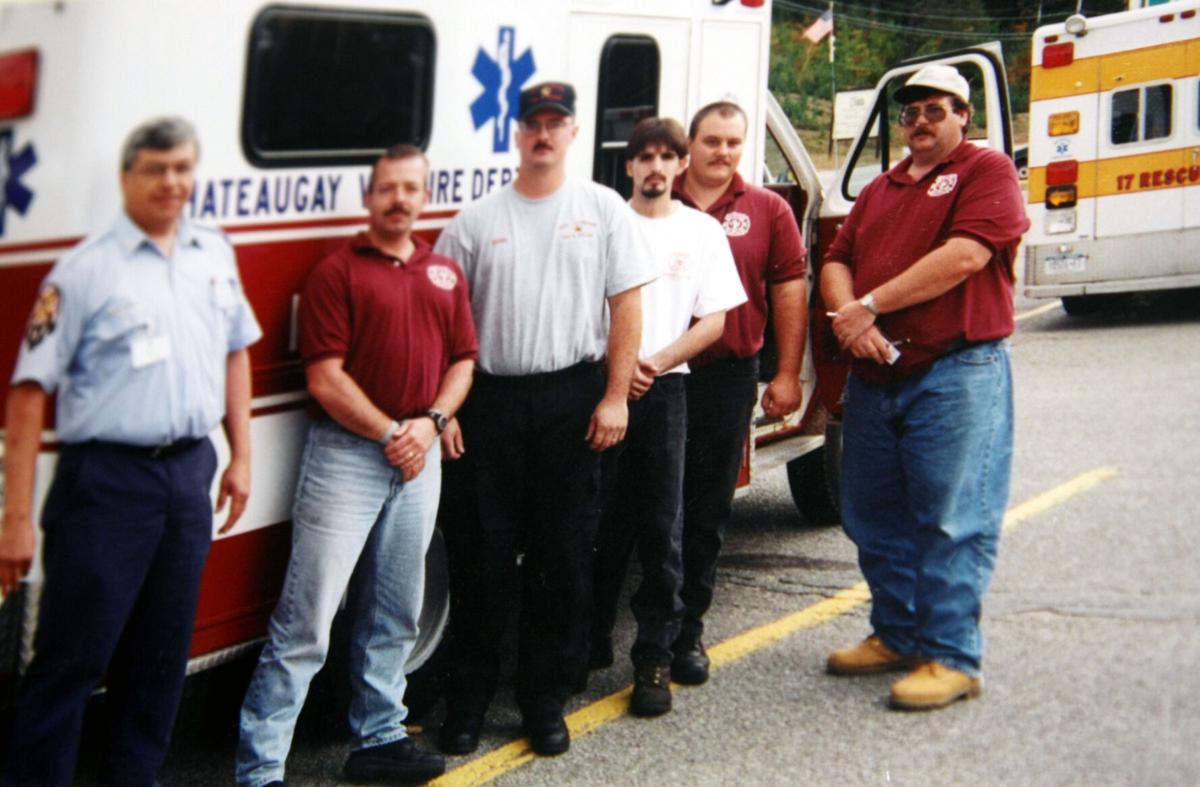 Jason Trombley and the Chateaugay crew gather for a photo. 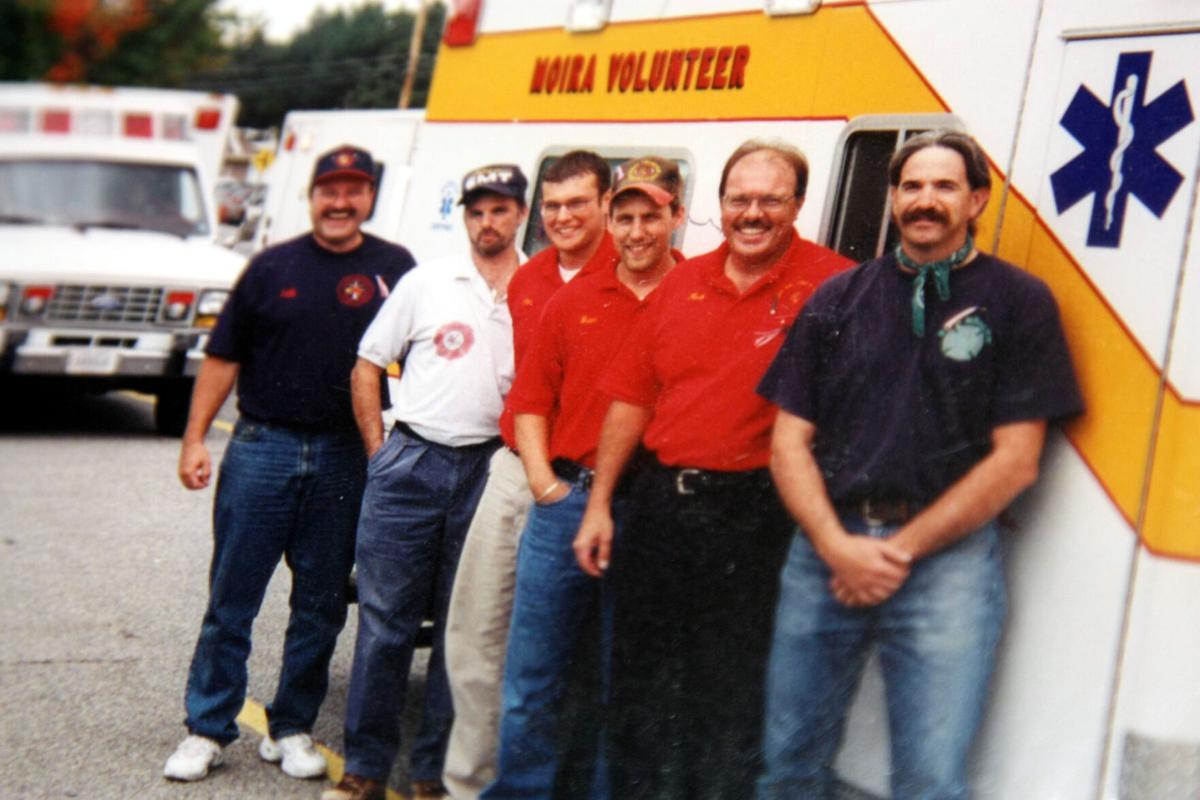 Darrell Trombley and the Moira crew gather for a photo. 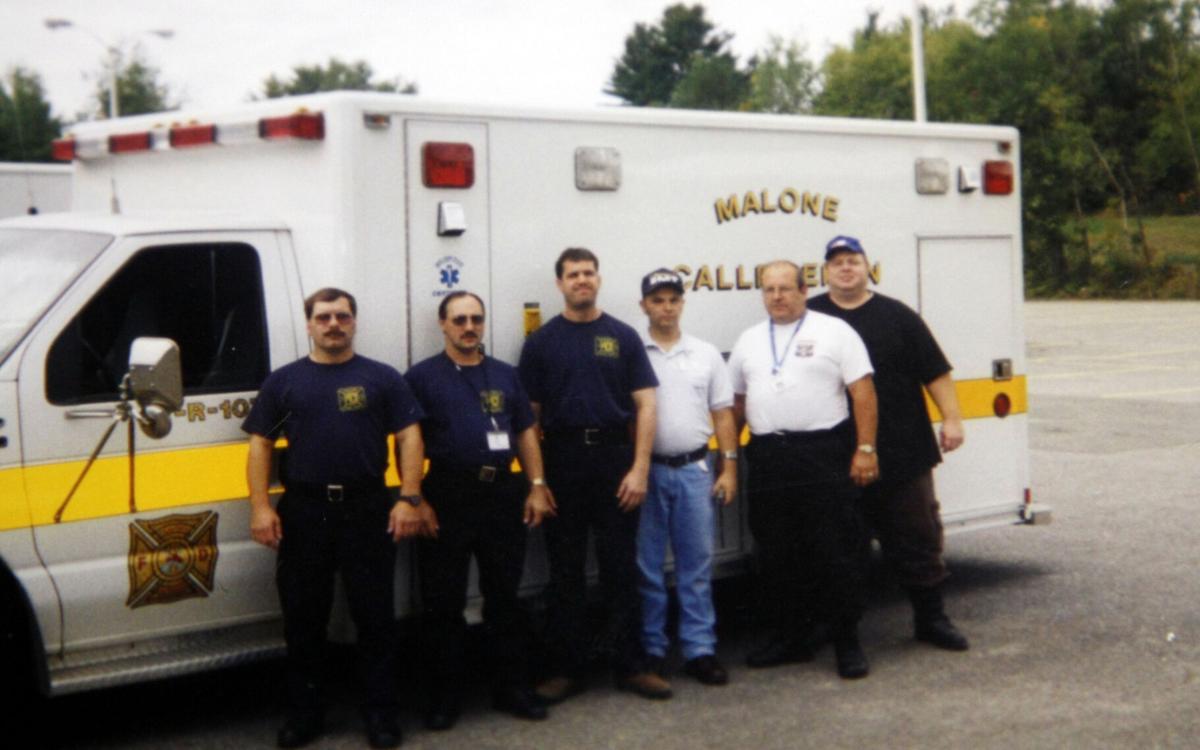 Darwin Trombley and the Malone crew gather for a photo. 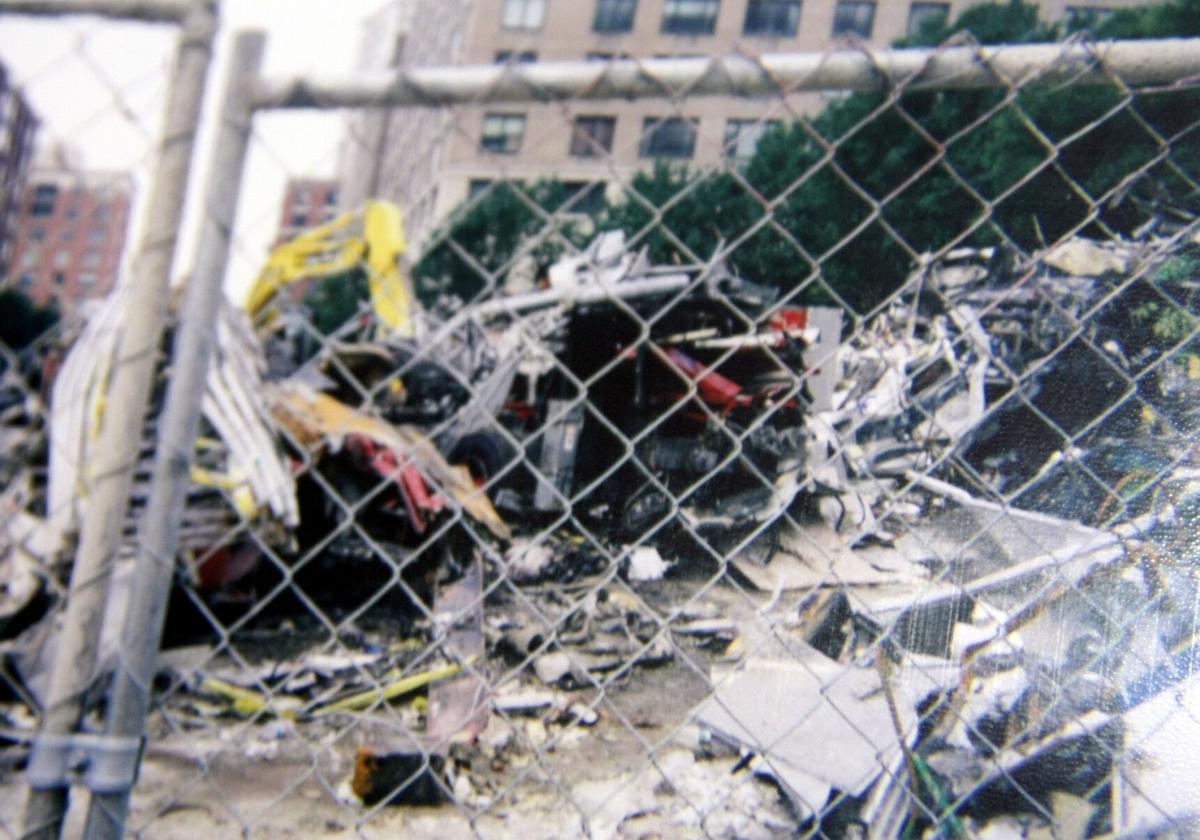 The remains of Firetruck 10 from the first wave response units is rested away from the surrounding debris. 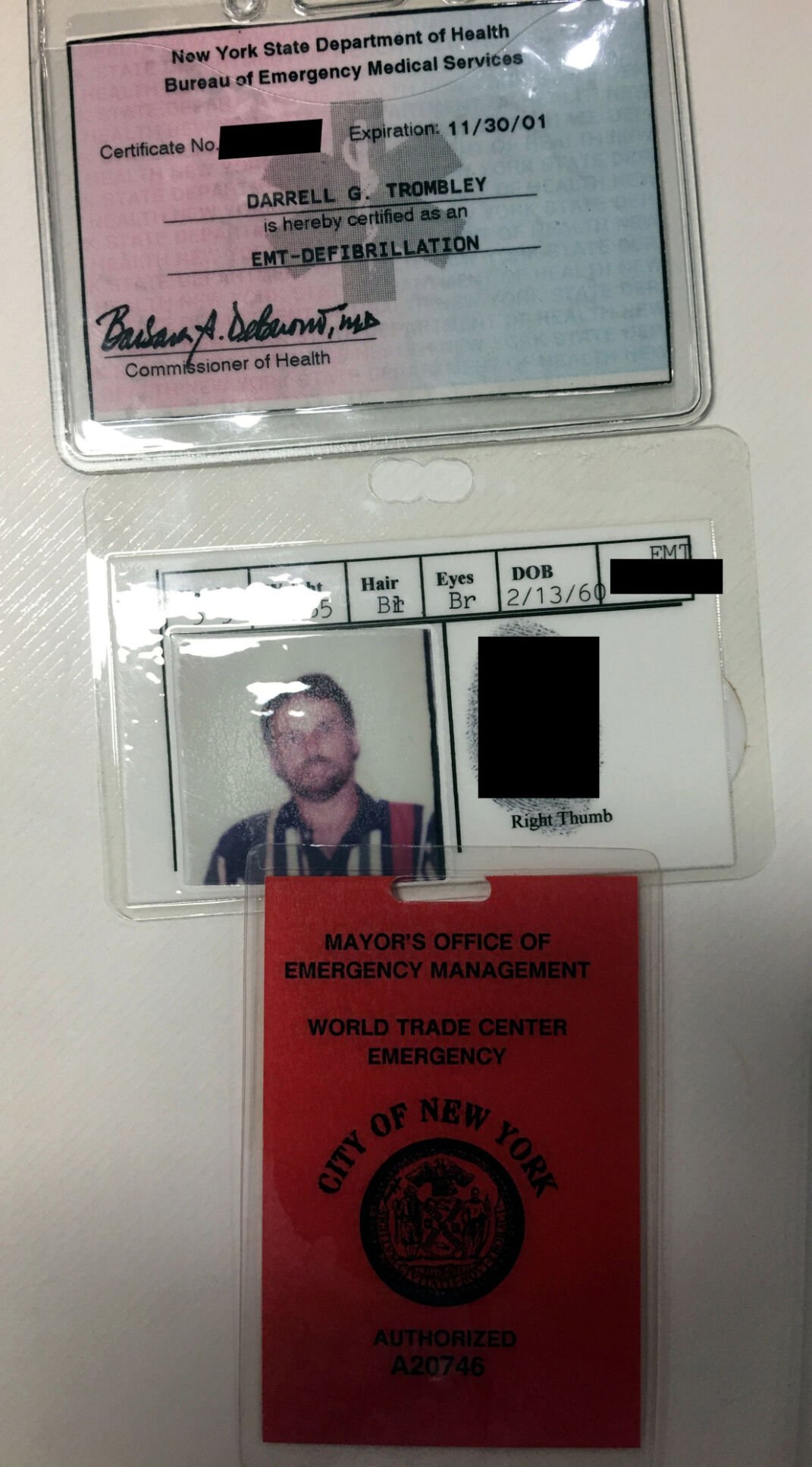 Units gather in Saranac Lake to begin their departure south into the city. Photo credited to Darwin Trombley

Lt. Sullivan, left, and an unidentified EMS lieutenant hold flag received by school children from Glens Falls, in front of the remains of Tower 2. Photo credited to Darwin Trombley

The WTC2 facade stands next to the “pile.” Photo credited to Darwin Trombley

Jason Trombley and the Chateaugay crew gather for a photo.

Darrell Trombley and the Moira crew gather for a photo.

Darwin Trombley and the Malone crew gather for a photo.

The remains of Firetruck 10 from the first wave response units is rested away from the surrounding debris.

BANGOR — For a family in Bangor, the events of Sept. 11 are going to be ingrained in family lore for many generations.

Three members of the Trombley family, Darwin Trombley, Jason Trombley and Darrell Trombley, left Franklin County 20 years ago to serve as part of the cleanup mission at the Ground Zero.

Darwin is a rescue captain of the Bangor Fire Department with more than 40 years of fire and EMT service. Darrell is Darwin’s brother who is first assistant chief at the Bangor Fire Department and has been an EMT since 2001. Jason is Darwin’s son who is past chief, current firefighter in Constable and has served for more than 20 years. They are just three out of the 36 EMS responders from Franklin County who traveled down to New York City Sept. 23, 2001, and aided in the relief effort amidst the aftermath of the 9/11 attacks.

“Two days after the 9/11 attacks, the ‘Statewide Mutual Aid’ plan for emergency medical services was activated and Franklin County was put on standby alert status,” Darwin said over Labor Day weekend when the three Trombley men got together to reflect on the 20th anniversary of the terror attacks. “On Sept. 19, all the county chiefs were to select ambulances and crews for the trip to New York City.”

To avoid leaving the county exposed with no manpower and equipment, the emergency preparedness coordinator for the county, Malcom Jones, issued an order that only agencies with more than one ambulance would be qualified to send one vehicle along with teams of six responders for each vehicle, Darwin said.

The men were told to bring their own supplies to be self-sufficient while on duty in New York City.

“We brought our “turnout” gear, a pillow, a spare set of clothes, and our IDs with us on the ambulances. The respective departments helped with funding the expedition. All Franklin County units formed at the staging area at the Saranac Lake Fire Station the following Sunday morning for a briefing on the current status downstate. A small prayer was shared and then we departed to the city roughly around 12:30 p.m.,” Darwin said.

The hours in New York City were long.

“Our tour of duty was 72 hours serviced by two 12-hour crews per ambulance — a midnight to noon shift and a noon to midnight shift. Darwin and Darrell were in the same crew, and I was in my own crew,” Jason said.

The crews from Franklin County had a specific mission.

“Our duties were to give on-site medical aid, with minimal chance of transport. If we did need to conduct transport to a hospital, our duty lieutenant, Rob Russo, provided us with an easy-to-follow route which coined the term ‘7-11.’ The route was travelling seven blocks down, then turn right onto 11th Avenue to reach the closest hospital,” Darwin said.

Crew also assisted the walking wounded to the field hospital units at a staging post.

When not working, crews were directed to a hospital ship.

“The crew not working were sent to the U.S. Navy hospital ship “USNS Comfort,” where credentials were issued, and workers can get food and sleep. The security was unreal,” Darwin said.

To get clearance from security, workers were required to keep three cards with them at all times, Darrel said.

“Every person boarding the Comfort had to pass through several checkpoints with the last being a major point with separate bag checks, metal detectors, and U.S. Marines inspecting ID’s and credentials,” Darwin said.

Once on the Comfort, crew members had the run of the ship, Darwin said.

“From the upper deck of the ship, we got a great view of the harbor and the city. We could see the EMS Command Post stationed at Chelsea Piers,” Darwin said. “The officers and crew aboard treated us with a tremendous amount of respect and the food was fantastic.”

While the ship provided a pleasant atmosphere, the reality of the cleanup effort was intense.

“It was like a war zone,” Darrell said. “When we went down to Ground Zero, the neighboring buildings had long nets covering the building’s faces. I was trying to figure out why these nets were up seeing how it’s been more than 10 days after the attack. It turns out large shards of glass were still falling off the buildings and the nets were to keep people away from said buildings for safety. We witnessed a piece of glass fall as it made a very high-pitched scream on the way down to the ground.”

The wreckage of the building was surreal.

“The “pile,” or what is now known as Ground Zero, appeared to be a mountain in the middle of the city,” Darwin said. “The heavy equipment working on top seemed dwarfed by the sheer size of the “pile.” Even after a week, the air was still filled with a heavy layer of dust, and everything was coated.”

On their way to Ground Zero, Darwin said people lined the sides of the road holding thank you signs.

“There was an eerie calmness to the area; hundreds of people calmly walking the streets as we passed, and it seemed as if everyone looked at you with acknowledgement and gratitude without saying a word,” Darwin said.

Darwin’s crew was assigned to the “Vesey Sector,” which was across the street from the cemetery of St. Peter’s Church and right in front of the burnt remains of Tower 5 of the World Trade Center.

“The cemetery was filled to the brim with a remarkably large debris pile, yet the church appeared untouched by the surrounding chaos,” Darwin said. “The area was hectic with police, firefighters, EMS support, military units, demolition staff, and recovery staff. Despite the complete destruction at every turn, there was a unique sense of order and somberness about the area surrounding us.”

The Trombley mens’ memories of the event were mainly of the reception they received.

“The NYFD was in the final process of taking care of a manhole fire. As we passed them on our way to our post, they went out their way to stop and salute us,” Darrell said. “They took time to acknowledge us. Let’s face it, in comparison to them and their busy careers, we are nobodies. They took time to acknowledge the fact that we were there for them, and they showed us respect without hesitation. It still means a great deal to me.”

Darwin remembered taking a picture of an American flag that was sent from some school children in Glens Falls with signatures and letters expressing gratitude for the first responders in New York City.

“The photo is displayed proudly in that school,” Darwin said.

“Walking back up Church Street, I noticed a ladder company operating a ladder tower truck on the pile. The crew was dousing water onto a fire that was still burning within the debris,” Darwin said. “I approached one of the firefighters on the turntable and shook his hand, telling him how sorry I was for his loss during the attack. The firefighter looked at me with an expressionless face and nodded. He said thanks and returned to his duties.”

Jason remembers how confusing the layout of the city was.

“With the number of one-way streets, it was difficult determining which route is the proper way to get to our destination,” he said. “There were NYPD officers we saw that, I swear, look like they were 16 to 17 years old. When we asked them for directions, they responded ‘I don’t know. I’m from Queens.’”

The memories will linger long with the Trombleys and that’s important to them.

“As a country, we must never forget what happened,” Darrel said.