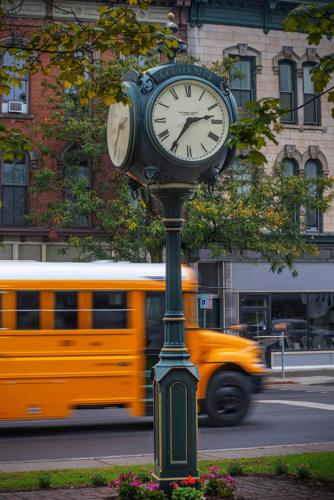 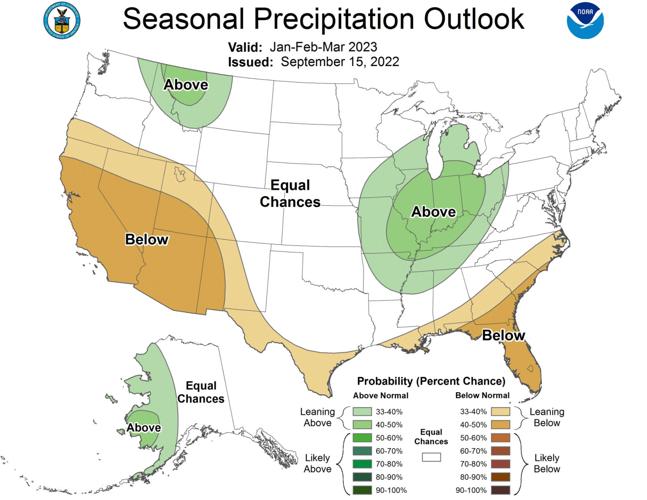 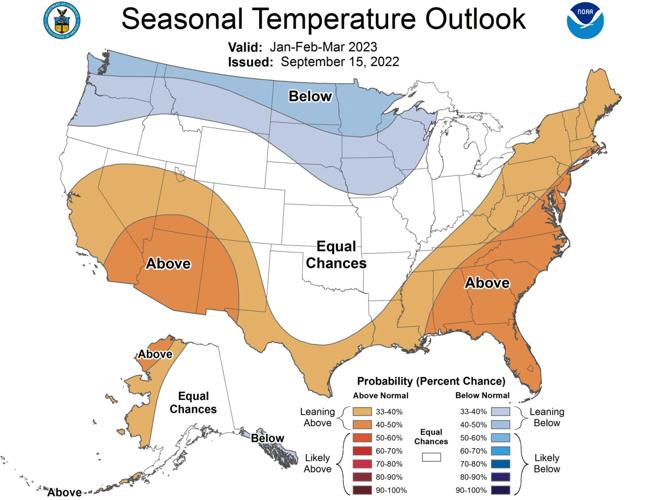 WATERTOWN — Autumn and the equinox arrives at 9:03 p.m. Thursday in the region, and on its heels will be a climatological rarity.

For the third year in a row, we should expect to feel the effects of La Niña. The World Meteorological Organization says the three-peat would become this century’s first “triple-dip” La Niña, spanning three consecutive Northern Hemisphere winters (Southern Hemisphere summers).

The cooler waters from La Niña affect the location of jet streams, which impacts North America.

“Right now, it has a high probability (91%) of continuing through the fall — September, October and November,” Ms. Spaccio said. “The probability goes down for January through March.”

The National Oceanic and Atmospheric Administration reports the chances of La Niña continuing decreases to 54% from January to March 2023.

La Niñas, Ms. Spaccio said, can have various effects, but other weather-making elements must be considered.

“Last year a moderate La Niña in Watertown in December there was kind of not much snow and kind of on the warm side,” she said. “But then in January, it was pretty snowy and cold. There are other things that come in play with our winters are large scale systems that are forecast on a short time period. We can’t forecast those until we’re a couple weeks out.”

And then there are pesky things like “arctic oscillation”: the back-and-forth shifting of atmospheric pressure between the Arctic and the mid-latitudes of the North Pacific and North Atlantic.

“Things like arctic oscillation can really shift our winter one way or another, and that can change throughout the winter as well,” Ms. Spaccio said.

During La Niña winters, the polar jet stream typically dips farther south. But no two La Niña or El Niño events are alike. A decade ago, in 2012, the north country was in the grips of a more substantial La Niña than what the past two years brought. When winter was over in March 2012, it had been one of the mildest and least-snowy seasons on record. It reached 77 degrees on March 19, 2012, according to Times files.

NOAA’s long-range seasonal precipitation outlook for January, February and March calls for “equal chances” of Northern New York receiving above or below precipitation for that time frame.

For winter temperatures, NOAA says our region is “leaning above” recording above average temperatures for January, February and March.

Ms. Spaccio said October is also expected to be relatively warm for our area. Warm Lake Ontario temperatures could increase the chances of lake effect snow as winter sets in.

“If it stays warmer longer, then the lake will stay open longer and we’ll get more lake effect snow,” Ms. Spaccio said. “If we get cold, it could freeze up earlier.”

She noted that October, November and December are forecast, a 50% probability, of having higher than normal temperatures.

“That’s not super high, but a decent probability for being warm through the beginning of winter,” she said. “That could definitely leave the lake open for the first part of winter.”

On a larger scale, the cooling ocean temperatures that create La Niña may be some good news for the effects of climate change, but not much.

“It is exceptional to have three consecutive years with a La Niña event,” Petteri Taalas, secretary-general of the World Meteorological Organization said in a news release. “Its cooling influence is temporarily slowing the rise in global temperatures — but it will not halt or reverse the long-term warming trend.”