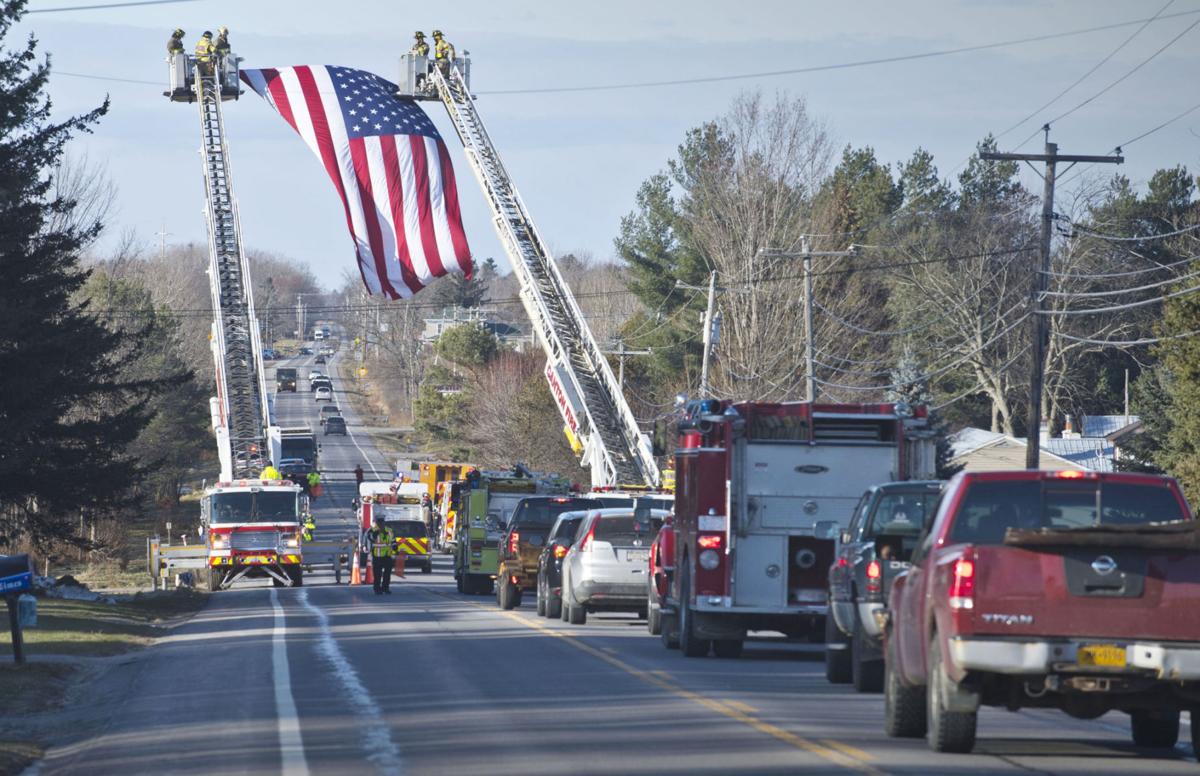 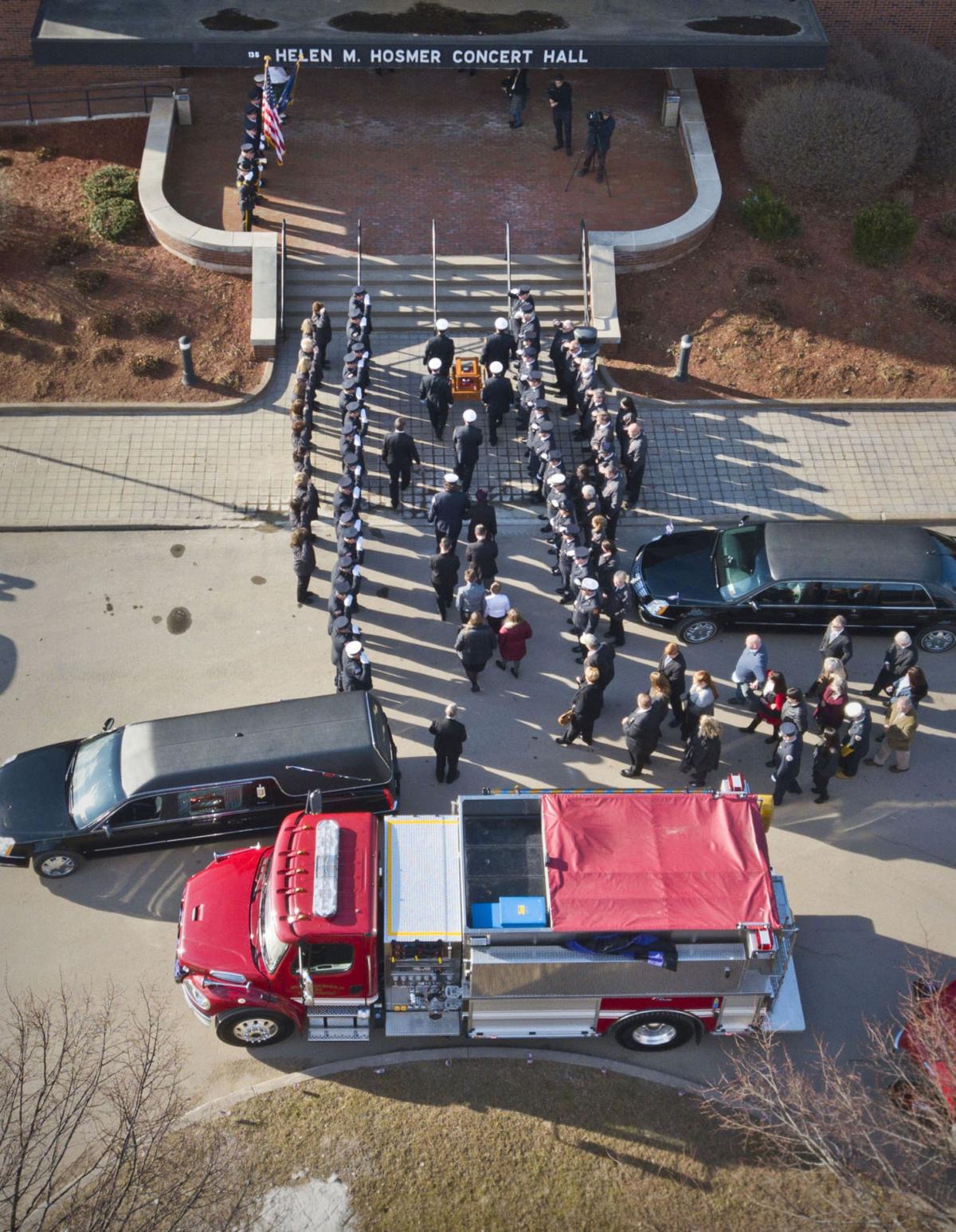 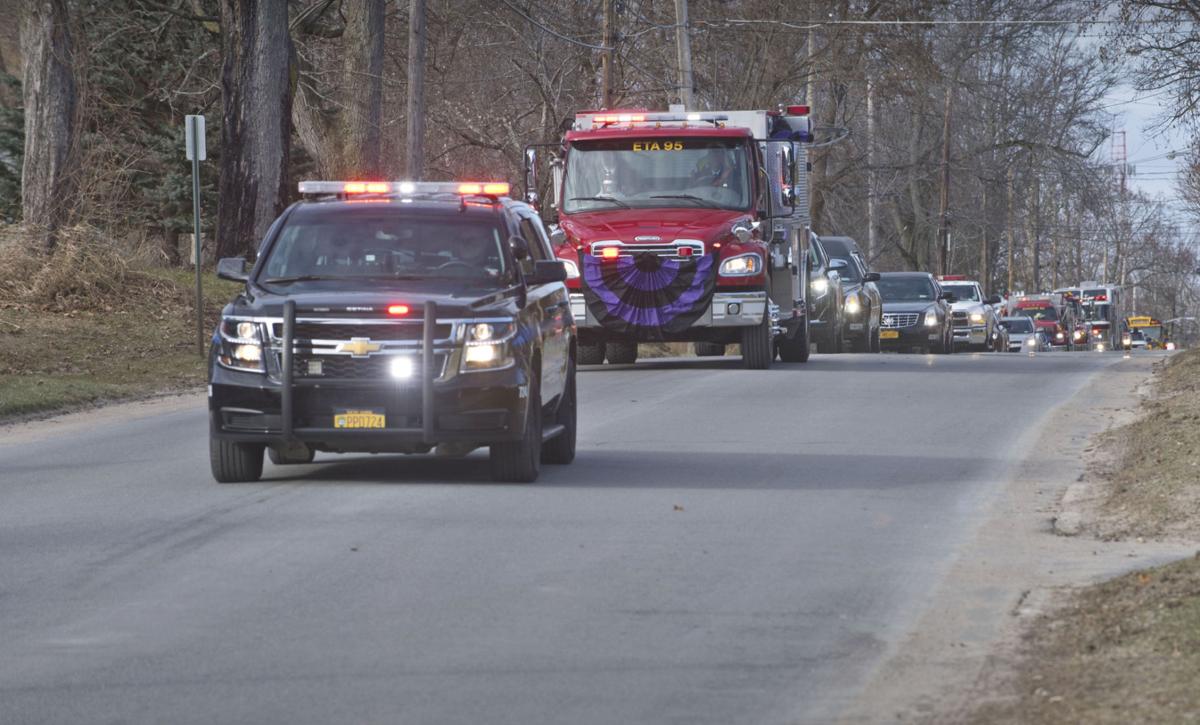 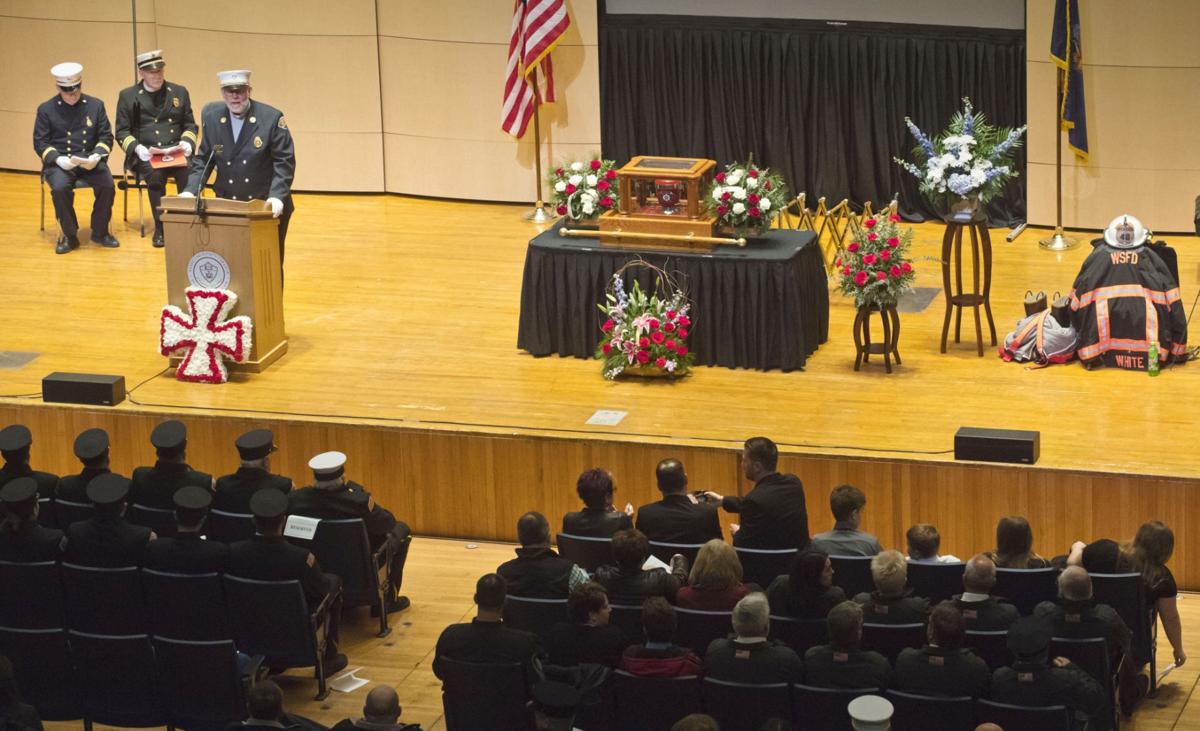 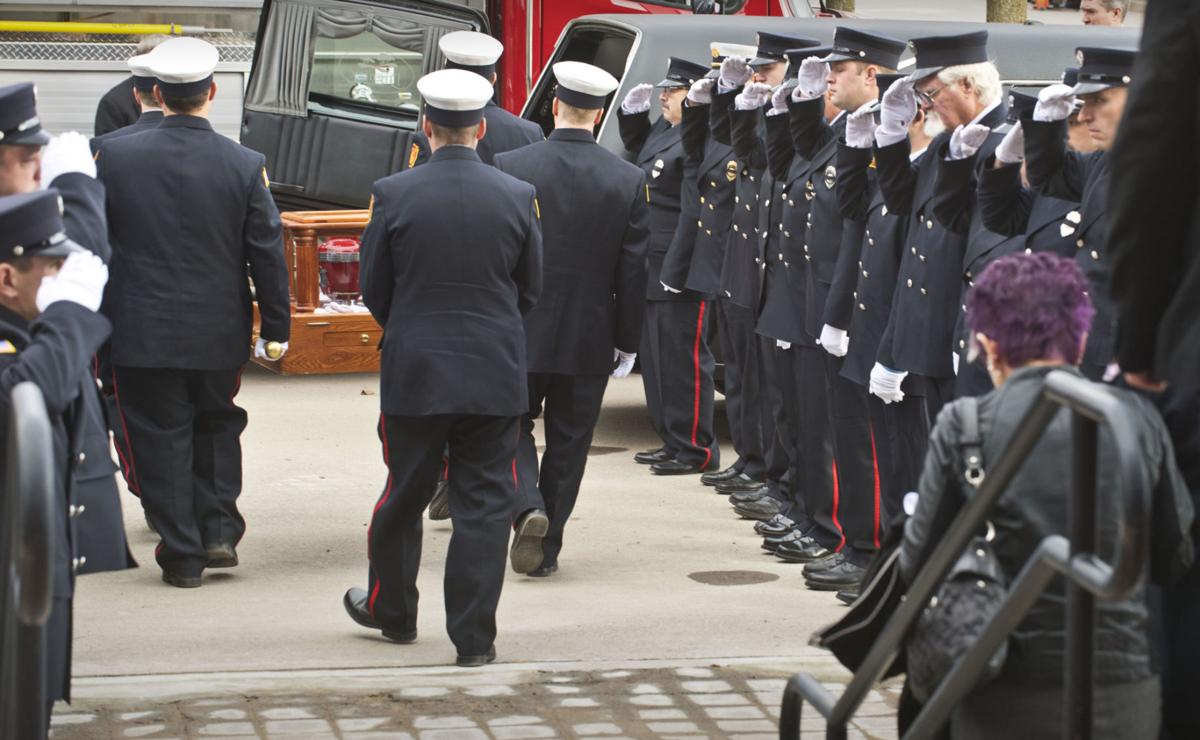 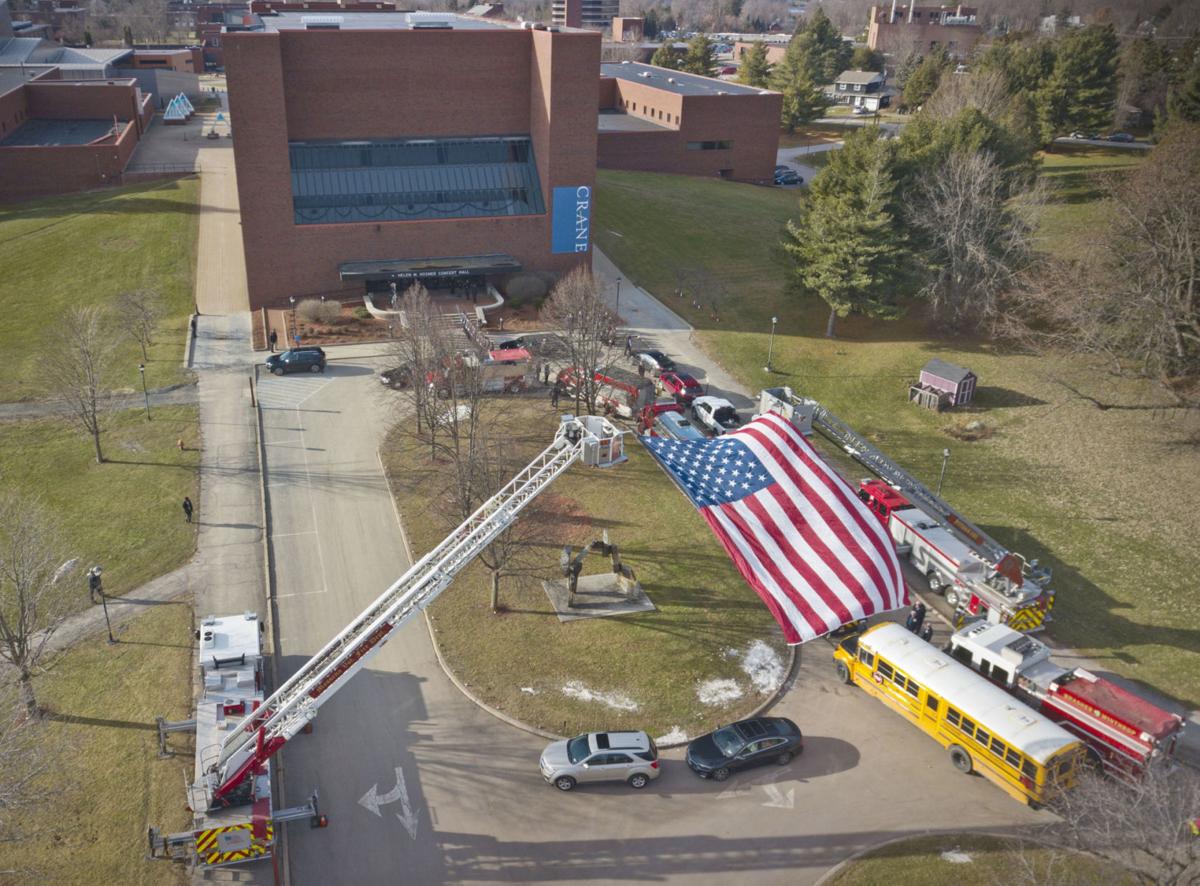 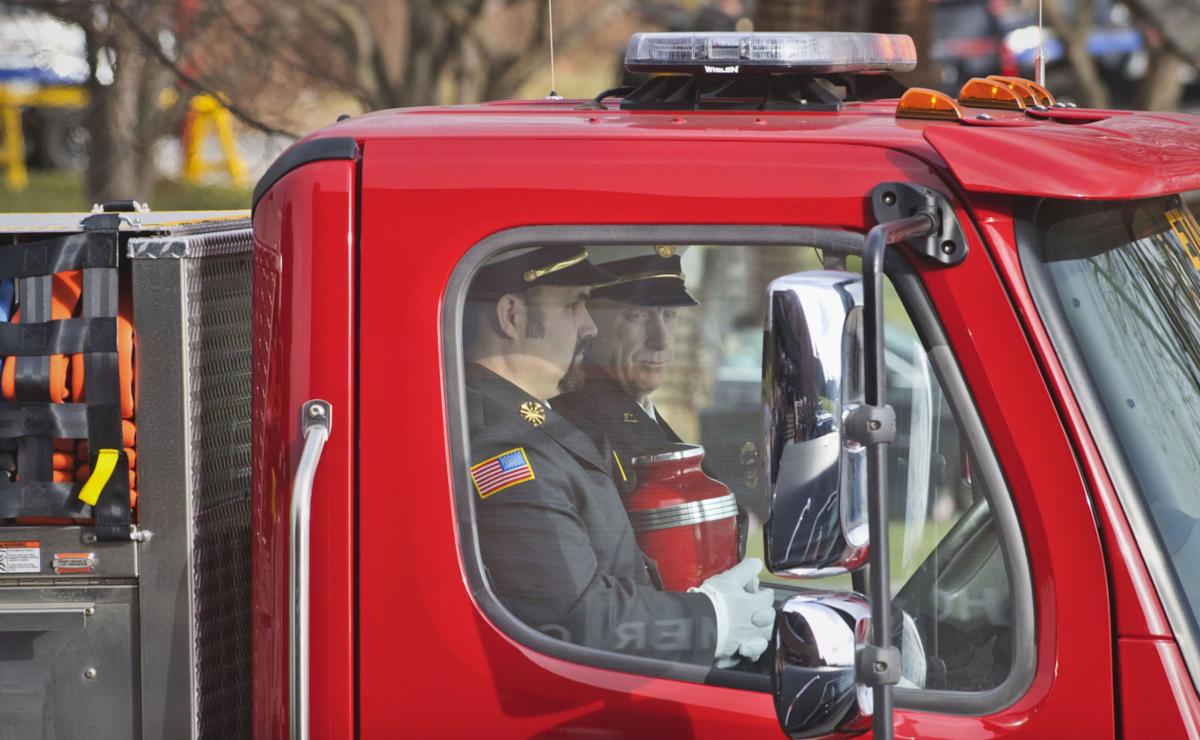 POTSDAM — West Stockholm Fire Chief Robert E. White was remembered in many roles and by many people Wednesday morning during a memorial service at SUNY Potsdam’s Hosmer Hall.

Around 7 p.m. on Dec. 5, 65-year-old Chief White responded to a fire near his home, in the rear of a Potsdam residence, 414 Route 11B. Shortly after arriving, Chief White collapsed and was taken to Canton-Potsdam Hospital where he was pronounced dead at 7:45 p.m.

Detective Caringi said the initial autopsy report indicates Chief White’s cause of death was related to heart disease and Coroner June Wood determined his death to be of natural causes.

“We remember him as a neighbor, and as a friend and a mentor,” Chaplin VanWie said. “We remember how dedicated he was to the fire service.”

That dedication was something that was highly regarded by his community, as was seen before, during and after the service.

Waiting inside and out of Hosmer Hall were members of fire and police departments from Potsdam, Cherry Valley, Canton, Morristown, Norfolk, West Potsdam, Helena, Lisbon. Massena, Norwood, Plattsburgh, East Seneca and Copenhagen, as well as other first responders that represented townships and communities in and out of St. Lawrence County, supporting West Stockholm Fire Department and Chief White’s family,

Members of the state police and the St. Lawrence County Sheriff’s Office were present.

That doesn’t include members of the community that knew him for his volunteering in sports and other activities outside of fire service.

The droning of bagpipes escorted the West Stockholm Volunteer Firemen who carried Chief White’s red urn in and out of Hosmer Hall, as eyes welled from the cold and heartache of loss.

Chief White’s wife, Trudy White, guided and supported by her and Mr. White’s two sons, their daughter-in-law and three grand children, took the stage and expressed gratitude to the community as well as memories and heartache.

Mrs. White joked about not liking the man who would become her high school sweetheart and husband, but “over a short period of time, I fell in love with this big guy and I knew right away that he was the one.”

And while he was “such a good father” to their sons, Nicholas and Jason, and was willing to do anything she needed, she repeatedly joked about his refusing to be on diaper duty once children came along, lightening the mourning of the many, though that changed with their granddaughter Reagan White and two grandsons Fletcher and Miles White.

Fighting back tears as she described what her grandpa meant to her and her family, Regan said “My grandpa was probably one of the best grandpas a person could wish for,” wondering now who will teach her the real rules of basketball and who will give her warm hugs.

“We should all take a page from his book of life,” he said. “He did it right.

He said the outreach from the community at large was “truly incredible,” and is a “true testimony to the man my father is.”

“We are all a family now,” He said. “It shouldn’t have happened. It’s too soon. It’s not right. He deserved more . . . He had a lot more to do. Dad, you have earned all of this recognition today. We love you.”

Mrs. White said they had a wonderful life together with “so many adventures along the way

“Bob was well loved by his friends, colleagues and his family, which, seeing all of you here confirms that,” she said. “He was my rock and he was always there for me. Bob, you were the best husband I could have ever wished for. My heart is broken. I will miss you so deeply.”

“Bob exuded pride in his service with discipline, teamwork, respect for the officers and fellow firefighters and had an unmatched dedication to his family,” he said. “Bob’s standard will live on through all of us, as we carry on his legacy to be the best firefighter that we can be. Car 7, you’re gone but never forgotten.”

Members of West Stockholm Fire and other first responders participated in the “Placing of the Gloves” ceremony where they removed the white dress glove from their right hand and placed them next to the urn, the right hand representing the hand of strength, friendship and honor.

Before departing, a Bell Ceremony and last alarm led to Hosmer Hall being filled with the sound of firefighters’ pagers going off, followed by tones going off across the St. Lawrence County scanner by an emergency services dispatcher.

“West Stockholm Fire, Car 7,” the dispatcher announced to the echoes of sobbing, “. . . Reporting after 41 years of service, Bob White, County Car 7 answered his last call on Dec. 5, 2019, in the line of duty . . . We thank you for your dedication, your years of service, leadership and friendship. We will never forget your courage, honor and duty . . . We’ll take it from here.”