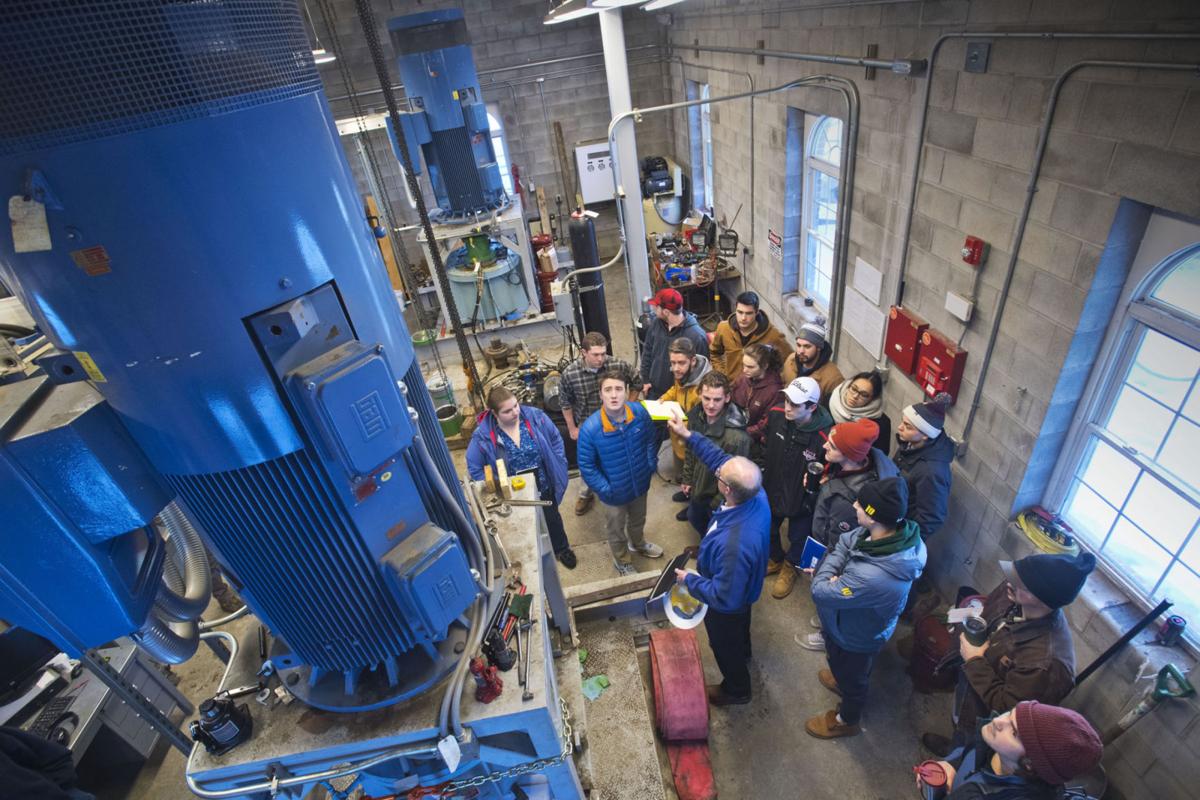 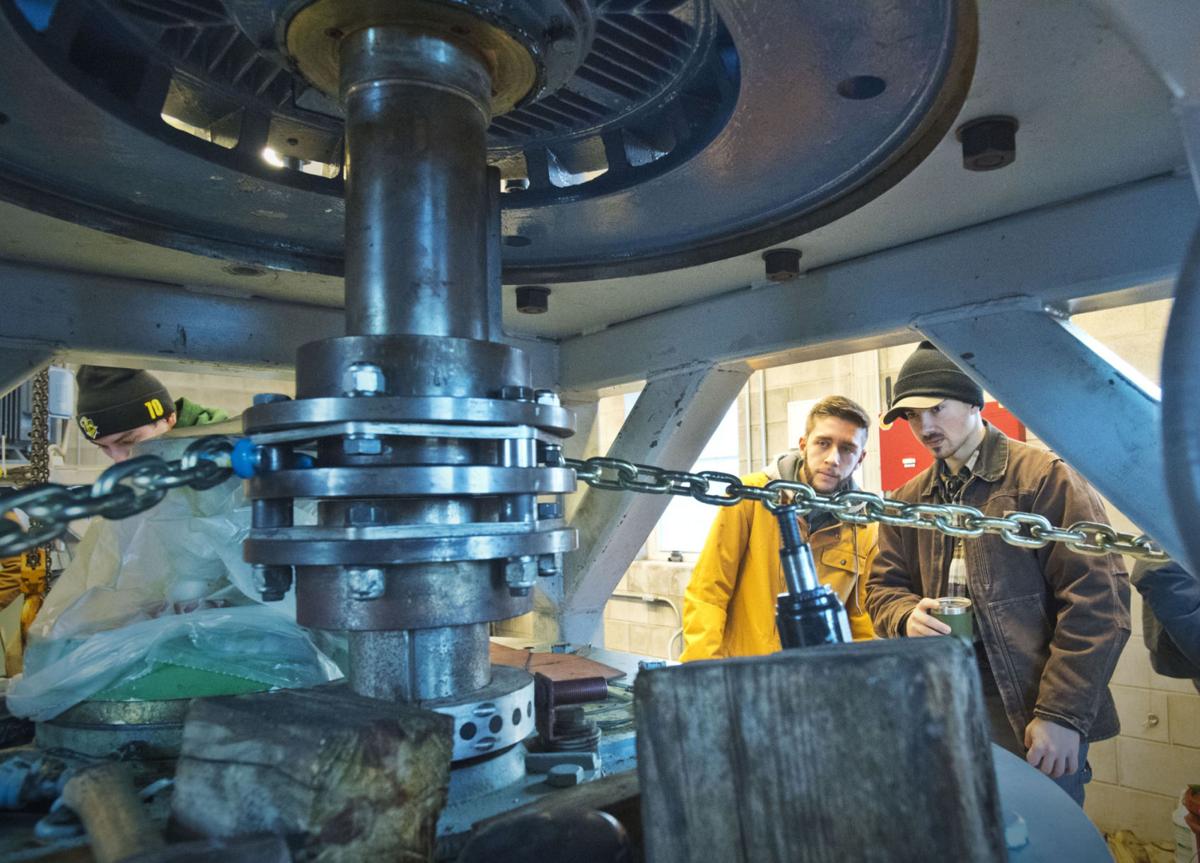 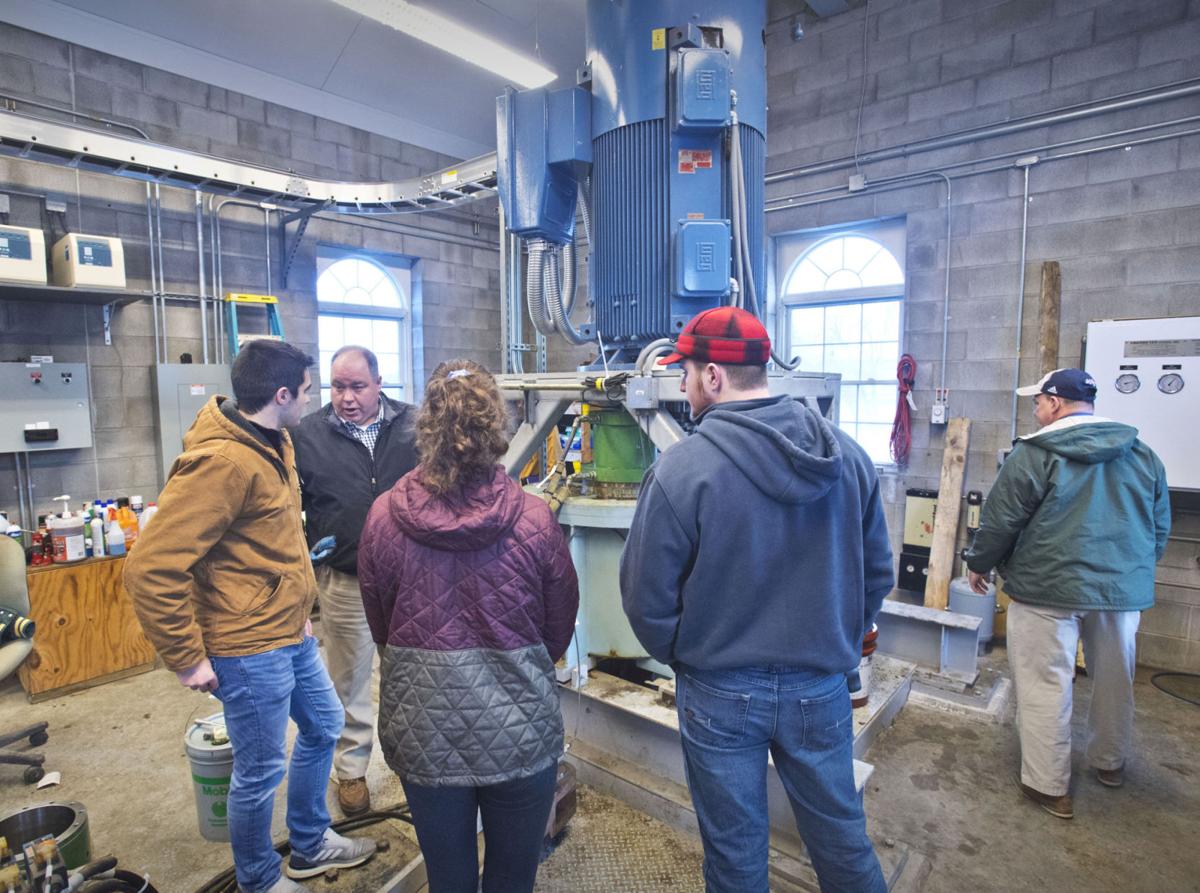 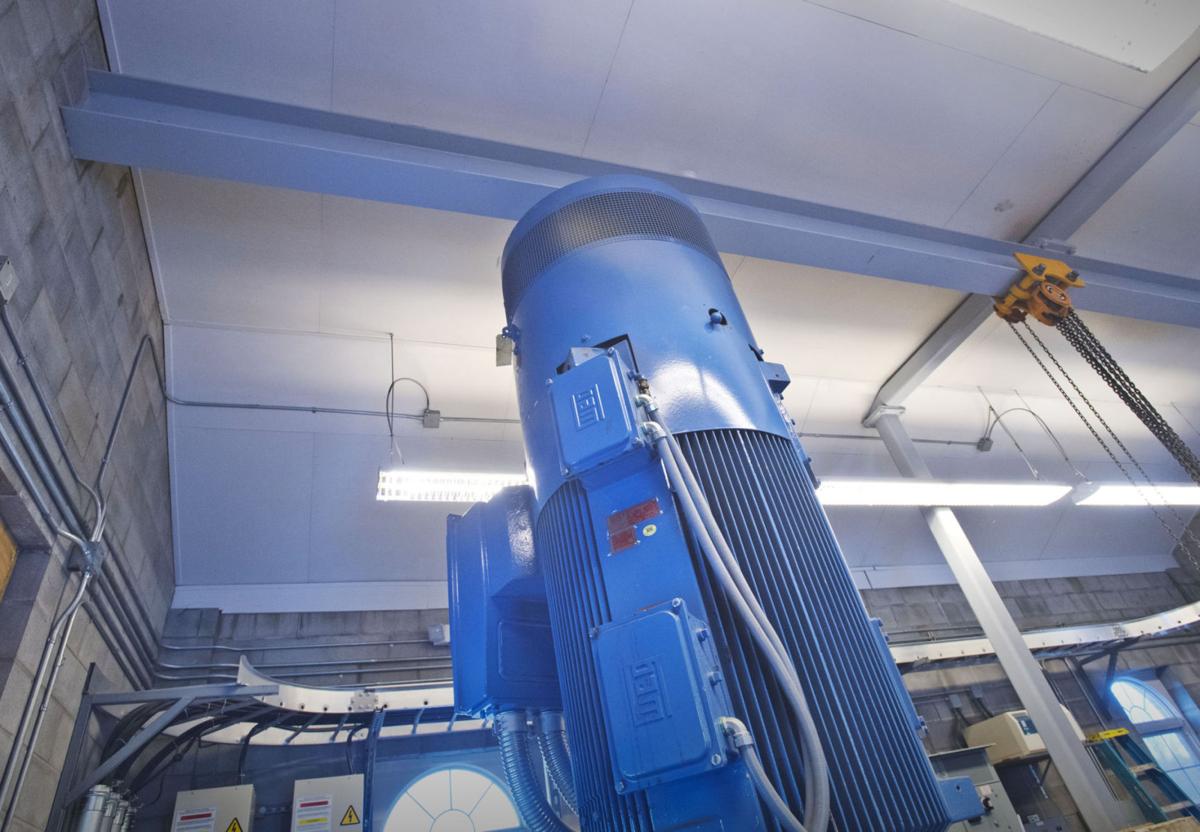 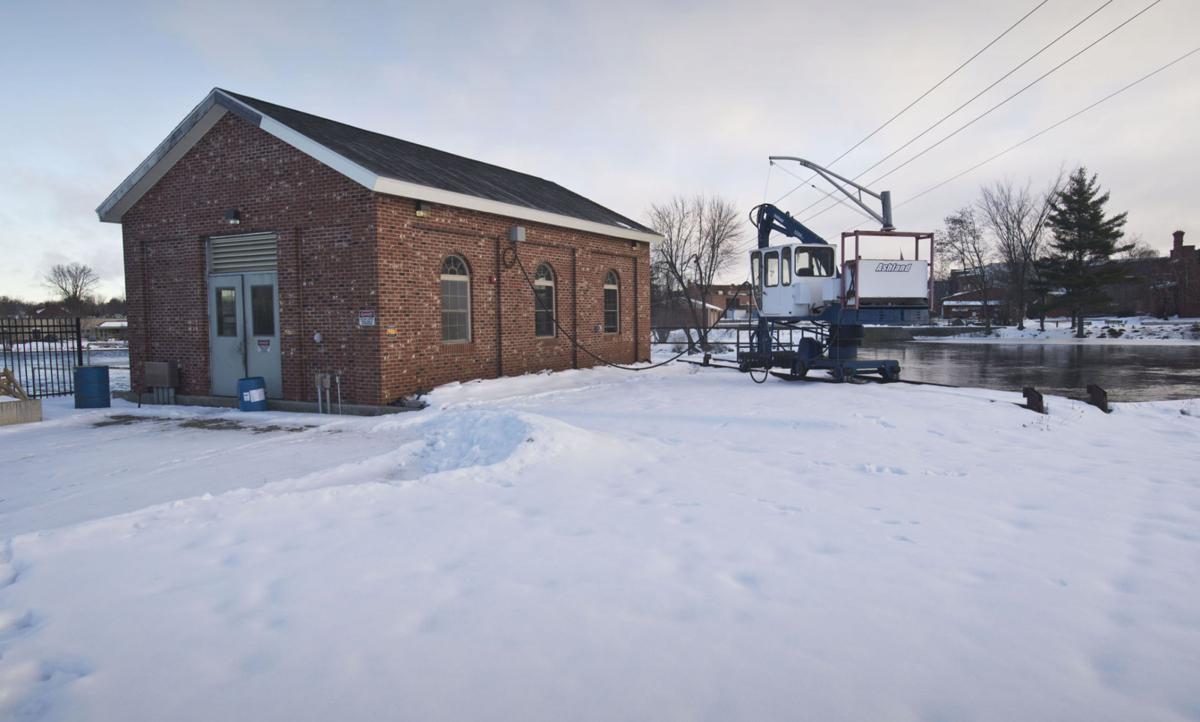 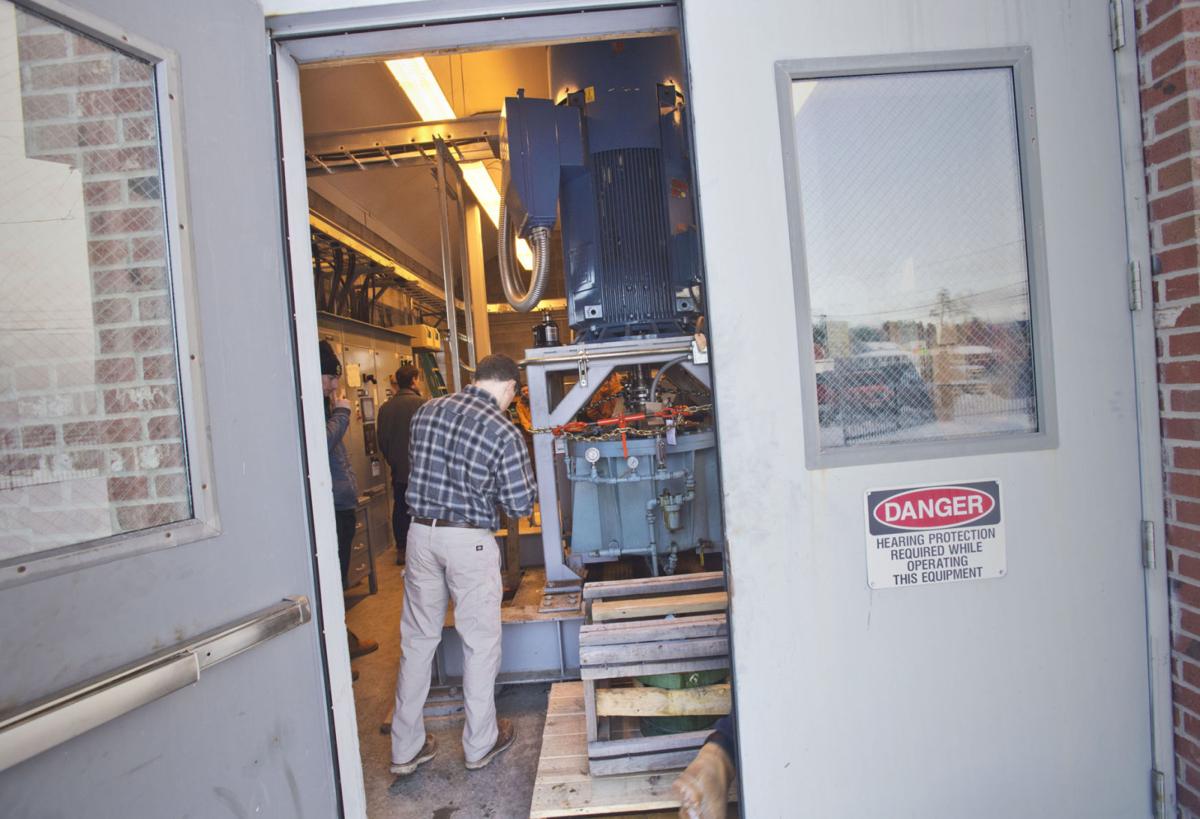 POTSDAM — It’s a win-win for the village and two teams of Clarkson University civil engineering students who are working together to resolve a West Dam dilemma as part of a final project for the students.

About 16 students surrounded generator one, at the West Dam facility at 8 a.m. Wednesday as they listened to Bergmann Associates Engineer Donald P. “Don” Nims explain some of the pains the village faced with dealing with the inoperable turbine as generator two whirred loudly next to them.

Village Administrator Gregory O. Thompson said the coupling of the municipality and the university was ideal.

Mr. Thompson said the “capstone project” for the students would allow them to have a look at the West Dam Hydro structure surrounding the two generators and come up with a way to retrofit the building to get the generators out.

“The reason being there wasn’t, apparently, a lot of thought into the removal of these generators and the gear boxes,” he said. “As it stands, right now, if number two goes down and we have to get it out of the building, we have to take number one apart to get it out the door. Because there is no way to get number two past number one.”

Under the current circumstances, one of the possibilities for removal is by taking off the roof of the structure, which presents additional problems, Mr. Thompson said.

“Because it is so tight in here one of the things that we look at for removal is having to take part of the roof off, to bring a crane in to pick the generator up and out,” Mr. Thompson said. “As you can see, this whole wall is electrical, you have wires, you have computers. Everything that we use to run this plant. You can’t expose that to the weather. So should we have to pull the roof, you’re faced with quite a problem.”

Clarkson’s Director of Construction Engineering Management Erik C. Backus, who coordinates the Civil Engineering Department senior design capstone projects, said this allows the students to apply all they learned as civil engineering students to a project and demonstrate how to get it done.

“The students had the opportunity to choose what projects they wanted to work on,” he said. “So, through a process we go though to make sure they have the right capabilities and skills, there were two teams interested and they are doing the project this semester.”

Christopher A. Waite and Case W. VanDeValk, the two seniors leading each of the teams tasked with the project, said they looked forward to the real-world experience they would be getting.

Mr. VanDeValk said the project will be a change from much of the technical work that has been done up to this point.

“What we are seeing here is there is going to be a lot of work,” Mr. VanDeValk said. “There’s a lot of technical problems in the building that we are going to have to figure out what to do about, something a lot of us I know have not worked with before. So it’s going to be a great experience that way.”

Mr. Nims asked the students to come up with several solutions for the facility’s problem, come up with an assessment and then make a recommendation.

“Right now they will be putting together proposals and there is going to be a judging of their proposals and based on that judging, they will select a team to do the project,” Mr. Nims said. “Which is cool, because that’s what real life it all about and I told them, it’s a qualifications-based selection. There’s no price here, it’s based on their qualifications and the best team with the best skill and the best approach is going to seize the day.”

The project is also a huge cost saving for the village and Mr. Thompson said it will provide real-life experience for the students.

So it is a win-win for both of us,” he said. “It is a great opportunity for these young people to put into action what they have worked so hard for over the past three or four years. Now they get to work at it and try it and, in the meantime, we benefit because we’ll come up with a plan to get the generators out of here.”

Mr. Thompson said the village would then follow all the protocol for procurement, would sit down with Mr. Nims, bring in his firm and talk about where to go from there.