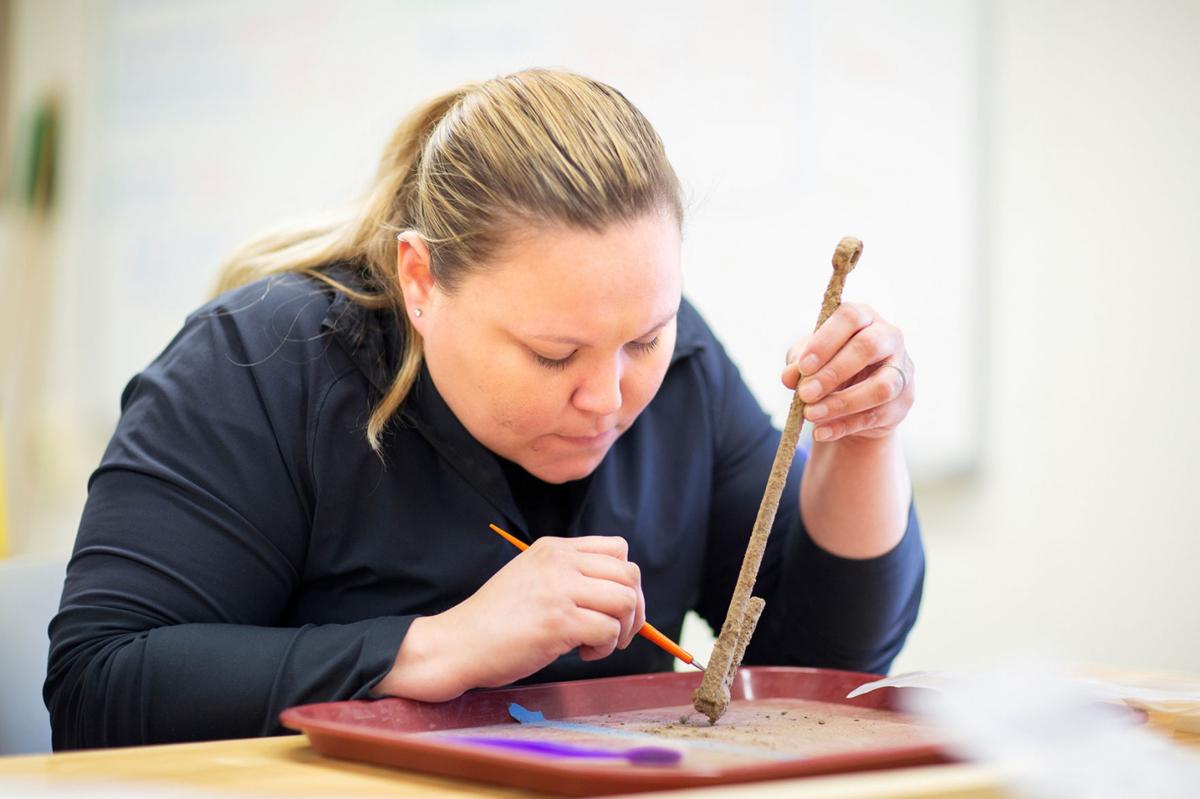 Mindy Thompson, a senior at SUNY Potsdam, cleans an artifact in SUNY Potsdam’s Archaeology Lab on March 6. The piece of metal was found during the Camp Union archaeological dig that took place in Potsdam during the summer of 2019. Contributed photo 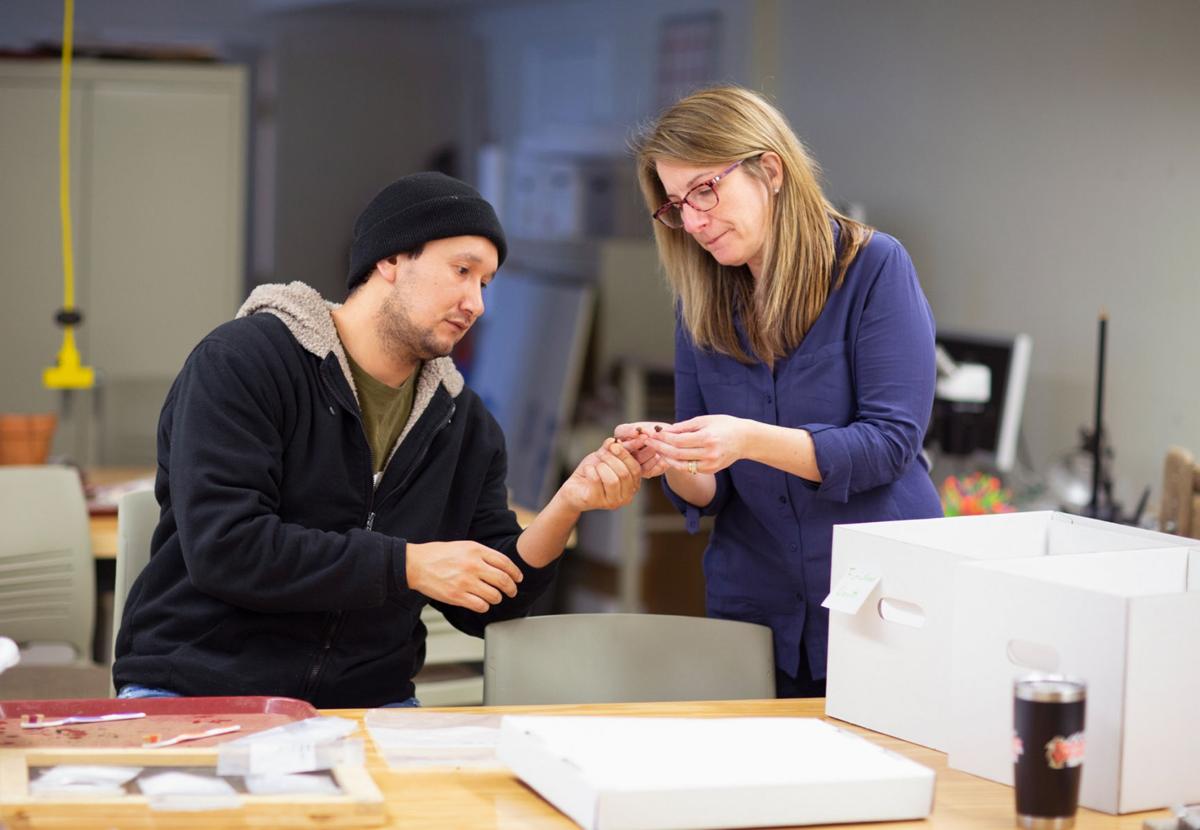 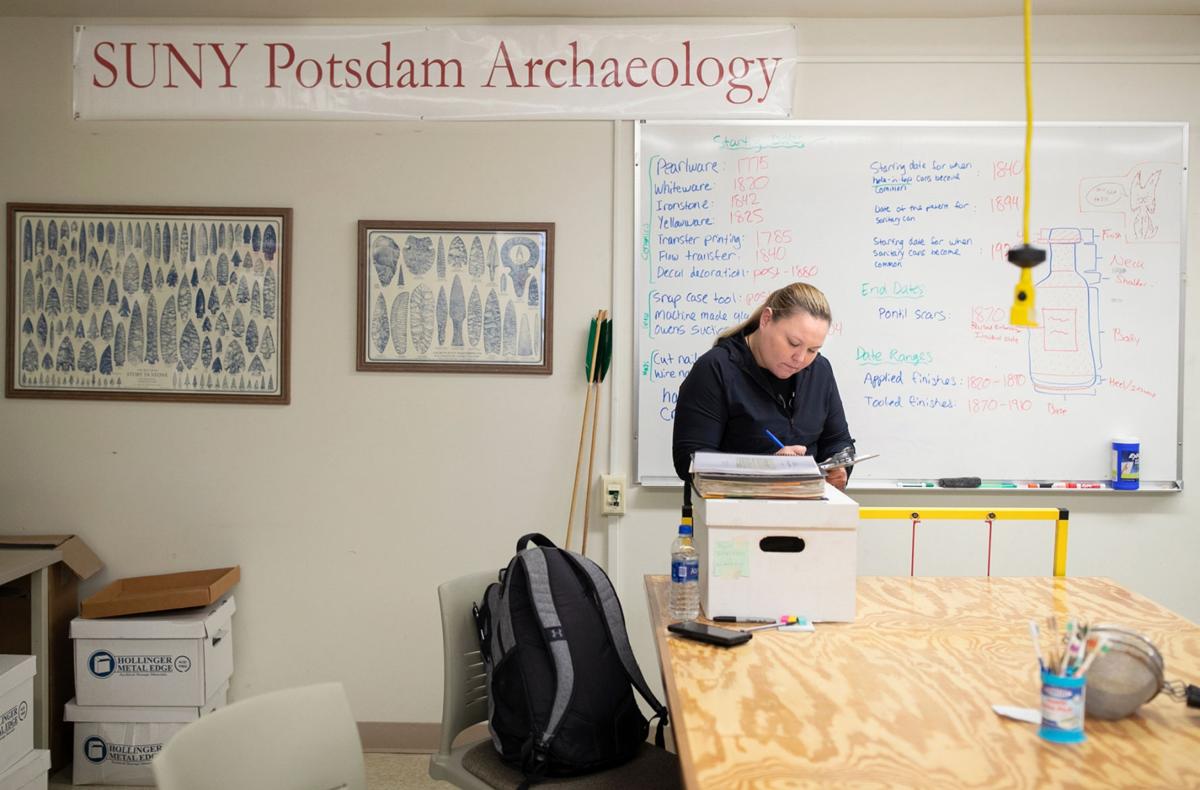 Mindy Thompson, a senior at SUNY Potsdam, cleans an artifact in SUNY Potsdam’s Archaeology Lab on March 6. The piece of metal was found during the Camp Union archaeological dig that took place in Potsdam during the summer of 2019. Contributed photo

POTSDAM — At an early age, Adam Jacobs was struck by ways his people were characterized.

The Native Americans were hunter-gatherers, he was told by teachers and others in the adult world. The broad statement, one among many, went in the face of what Jacobs, a Mohawk of the Akwesasne Bear Clan, knew from his elders and from his own budding interest in history.

“We had corn, beans and squash; we call them the Three Sisters,” said Jacobs, during a break from classes at SUNY Potsdam, where he is pursuing a degree in archaeological studies. “We were more than hunter-gathers. We were cultivators. But having to listen to that — to not be able to speak up to authority — always hurt me.”

Growing to adulthood and moving into the workforce, Jacobs heard many more generalities that lacked context and accuracy. So he kept up his own studies. He read about the Iroquois Confederacy and the formation of its democratic structure where all members — including women and children — had a voice. He juxtaposed this knowledge with other groups in history that are credited with early democratic work — societies like the ancient Greeks, who marginalized women and kept slaves. He wondered why the Haudenosaunee didn’t get credit for their work in pioneering democracy.

“When you can have women and children with a voice in a community, I think that’s real democracy,” he said.

A few years ago, he stood on a rooftop in the St. Lawrence River Valley, barely keeping his feet in 40-below windchill, fumbling to lay metal roofing. Something told him he had to make a change.

Soon after, Jacobs saw in the news that SUNY Potsdam, Ontario’s St. Lawrence College and the Iohahi:io Akwesasne Adult Education and Training Center had partnered to create an archaeological studies degree pathway that could lead him to a bachelor’s degree from Potsdam and certification as an archaeologist. He glimpsed an opportunity to turn his interest in history into a dream he could live.

“I want to put a voice to the Native American narrative within the archaeology field,” he said. “I feel our narrative is so often silenced and we are not given credit for the accomplishments of our past.”

Jacobs is hopeful that these cultural disconnects can be mended. He feels the keys are education and more partnerships like the one that is helping him to become a college graduate.

“I want to work within Akwesasne, to get Akwesasne education to work with Potsdam education,” said Jacobs. “I feel we will both benefit from a relationship with each other.”

Dr. Hadley Kruczek-Aaron, who heads the SUNY Potsdam Department of Anthropology, has a similar goal. The lack of Native American participation in archeology is striking and has historic roots in archeologists not being collaborative or sensitive to Indigenous beliefs and concerns, she said.

“The number of Indigenous archaeologists is very low despite archaeology being the study often of very early Indigenous history,” she said.

Kruczek-Aaron said the 2+2 Archaeological Studies program has been valuable for its help in establishing a relationship with the Akwesasne Mohawks. More programs need to engage with the Mohawk nation, and more Indigenous voices need to be heard in classrooms, she believes.

Under the program, students complete their first two years at St. Lawrence College, and their involvement in Potsdam begins with a single archaeology class each semester to limit the amount of commuting necessary. By their third year, students are fully matriculated at Potsdam.

“We are proud to see more students from Akwesasne being able to be here and be part of our classrooms,” Kruczek-Aaron said. “That diversity is really important. It’s an amazing gift to have Indigenous voices in the classroom, especially when we are talking about Indigenous heritage.”

Jacobs is getting hands-on experience in the archaeology field through an internship with the Tribal Historic Preservation Office. He dreams of one day owning his own archaeology firm.

He is not alone on this journey. He and Mindy Thompson both commute around 45 minutes nearly every day from Akwesasne to Potsdam. Thompson, a mother of two, balances family, work and classes. It is not always easy and she frequently has to adjust to unexpected changes in the schedules of her children.

“I didn’t ever see myself being in college before 2+2,” she said. “I never would have visualized it. Now we are getting ready to receive our bachelor’s degree. That’s a huge deal.”

When she graduates in May with a major in archaeological studies and a minor in museum studies, Thompson, of the Wolf Clan, will be the first in her family to have a college degree.

Through her family line, a story has been passed down of a battle that occurred on a wide field near her grandfather’s home. The details are scant, and Thompson thinks it would be interesting to get a team onto the field to test this oral history. Thompson and Jacobs know of other potential archaeological sites. They say there is a lot of work to be done within Akwesasne.

Jacobs has a natural gregariousness that helps somewhat in getting his voice out there. Thompson says she is quieter. Partly, that’s because an important set of questions never seems to get asked: “What do you think? What is your perspective, as a woman and as an Akwesasne Mohawk?” With her degree, Thompson will be better situated to share her voice and traditions.

This is wonderful! I wish all the best to the participants. Can't wait to see what we can learn from them!