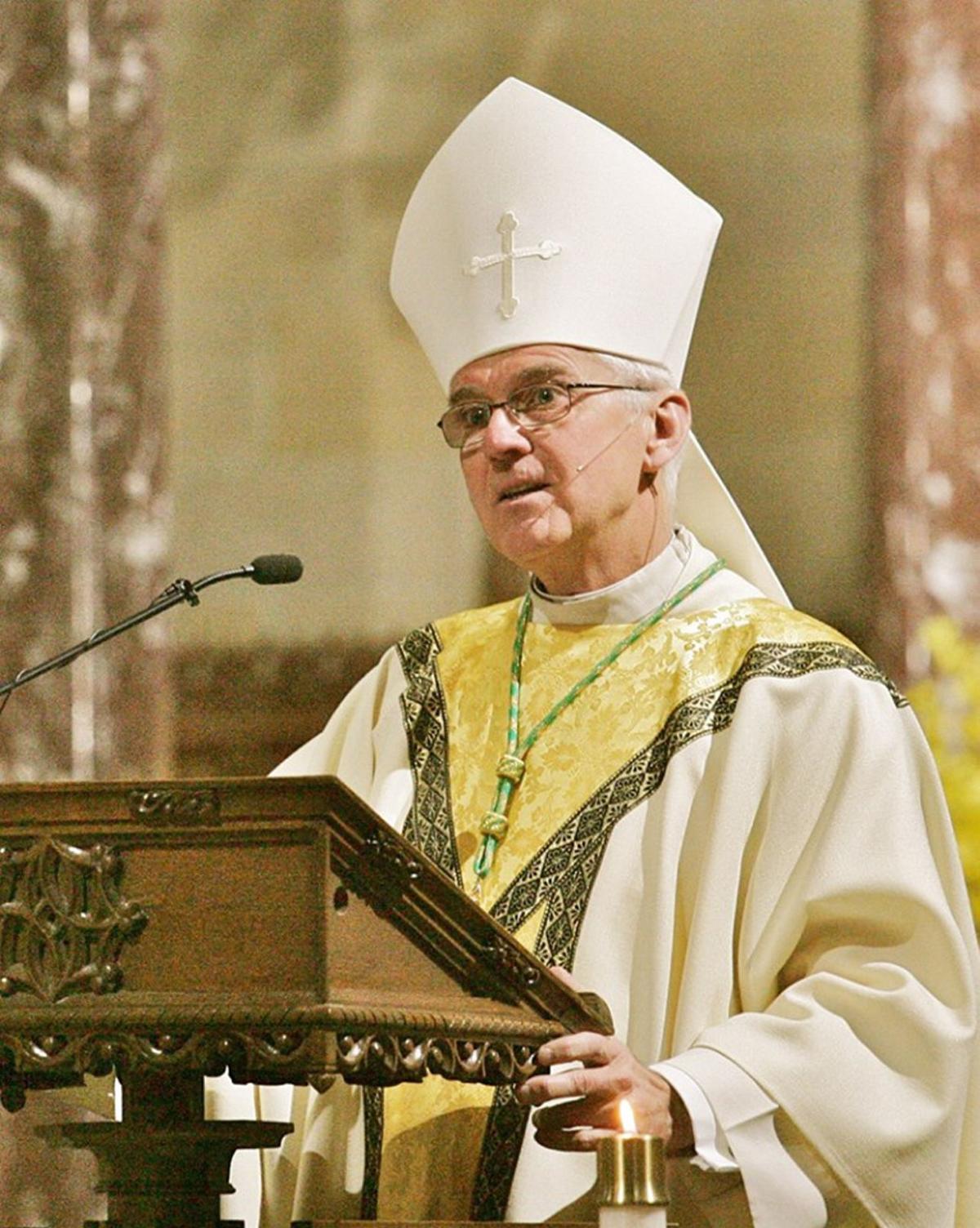 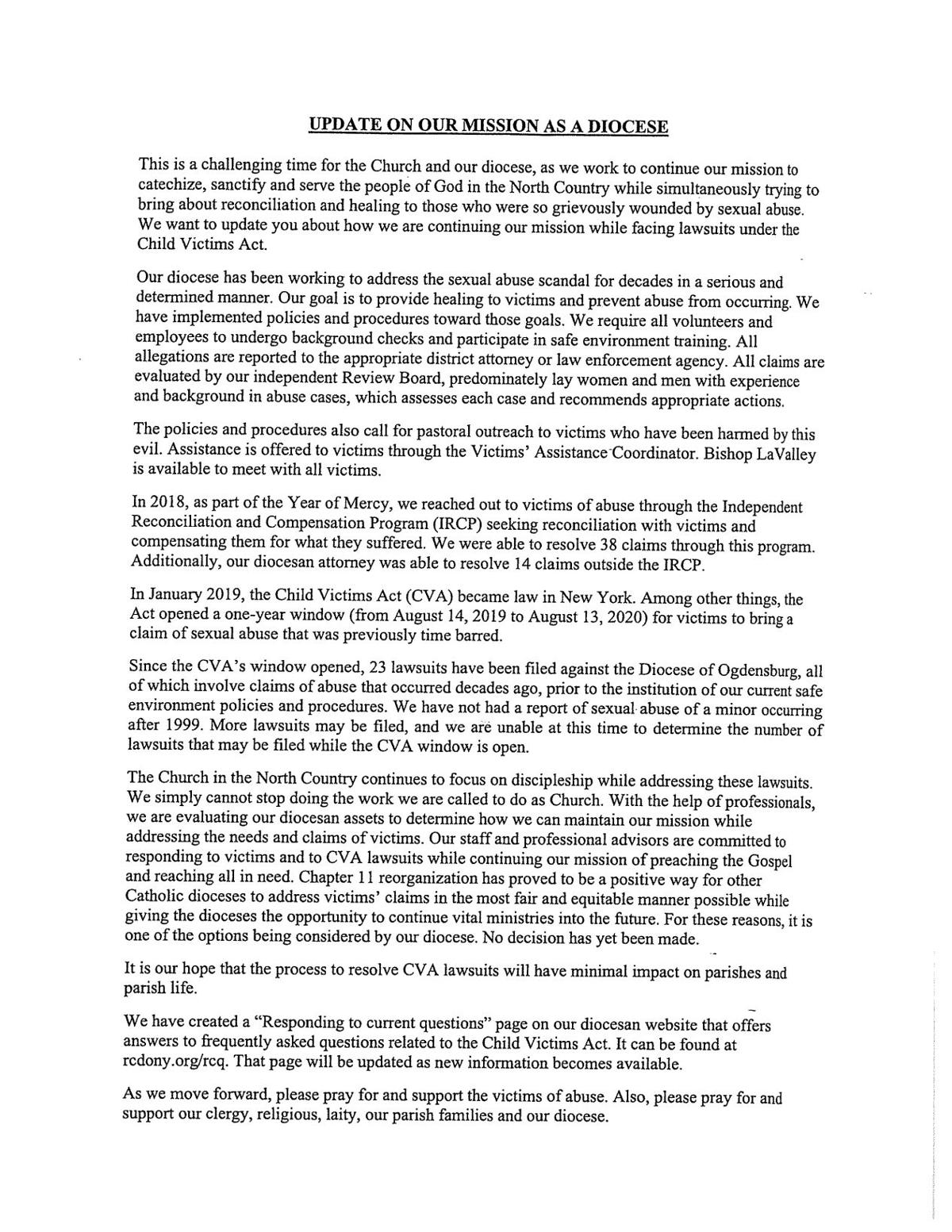 OGDENSBURG — Catholics in Northern New York received a message from the Diocese of Ogdensburg on Sunday.

A one-page letter, which was either handed out to churchgoers or included in the bulletin, was not distributed by all parishes Sunday. Some will distribute the letter on March 1.

The letter details the struggles the diocese has faced in the wake of the passage of the Child Victims Act which opened a one-year window for victims of childhood sexual abuse to bring lawsuits that were previously barred due to statutes of limitation. That window closes on Aug. 13.

Since the window opened, 23 lawsuits have been filed against the Diocese of Ogdensburg, headed by Bishop Terry LaValley.

“We want to be transparent,” Diocese Director of Communications Darcey Fargo said. “The Diocese is made of the people who reside in the 12,000 square miles the Diocese encompasses and they deserve to know where we stand.”

“We anticipate that more lawsuits may be filed, and we are unable at this time to determine the total number of claims that will be made while the CVA window is open,” the message read.

While the diocese will continue to focus on its mission, it still needs to consider the financial situation the lawsuits have caused.

“With the help of professionals, we are evaluating our diocesan assets to determine how we can maintain our mission while addressing the needs and claims of victims. We are determining what insurance coverage might be available to help us address the claims of victims,”

The message also noted that the diocese was considering bankruptcy.

“Chapter 11 reorganization has proven to be a positive way for other Catholic dioceses to address victim claims in the most fair and equitable manner possible, while maintaining vital ministries,” the message read. “For this reason, it is one of the options being considered by our Diocese. No decision has yet been made.”

The letter noted that parishioners could find more information on the Responding to Currents Question Page page of its web site at rcdony.org/rcq.

The intention is to keep the page updated as more questions arise,” Ms. Fargo said.

The page was launched in conjunction with the release of the letter and has a few more details than the letter, Ms. Fargo said.

In the Bishop's letter he writes, "It is our hope that the process to resolve CVA law suits will have minimal impact on parishes and parish life." He's in denial. The law suits, cover up and entire ongoing crisis have, and continue to have, staggering effects on parishes and parish life. Studies point to four effects in particular: "(1) deep hurt and anger in response to perceived betrayal by church leaders; (2) an effort to cope by separating relationship with God from relationship with the institutional Church (the empty pews, exited-Catholics); (3) a reawakening of pain connected to past, non-abuse related, injuries by clergy (the "stories" of past clergy injuries are hardly limited to sex abuse); (4) a concern for the spiritual well being of other family members (i.e. the haunting absence of Millennials and Gen Z in the pews and the resulting angst on the part of family members)."

What is particularly concerning is the abysmal failure of clerics on the parish level to effectively address 1-4.

What happened to the Bishop's letter to parishioners that was originally included in this article?

Hiding behind bankruptcy is no better than hiding behind vestments. Sell all your real estate holdings, give it to the poor, apologize and start over. There are many followers of Christ able and more worthy to fill the void.

Thumbs up for the most part. Catholic parishioner priorities are grossly misplaced. Case in point, the restoration work done at the catholic church in Croghan. Parishioners bragging about raising the $1.5M for the project. Just think what could have been accomplished had that money gone to their food bank.