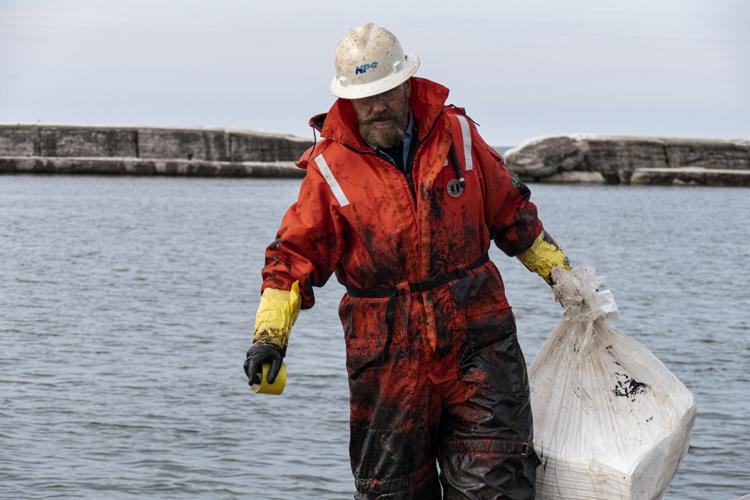 A spill responder carries bags of sorbent pads used to soak up oil from Oswego Harbor along the western edge of Breitbeck Park on March 10. Randy Pellis/Oswego County News 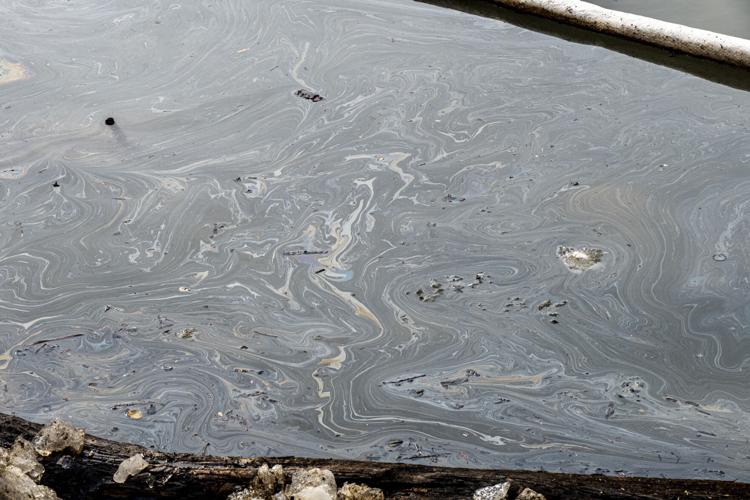 Oil remains in Oswego Harbor at the western edge of Breitbeck Park as of March 14, after a spill was spotted by a pedestrian on March 8. Randy Pellis/Oswego County News 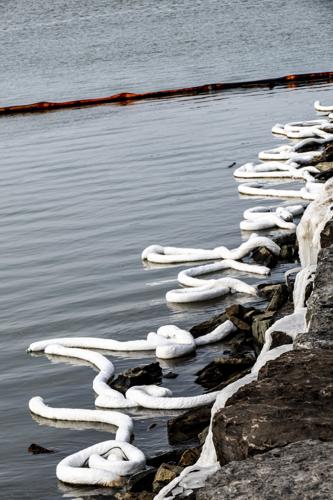 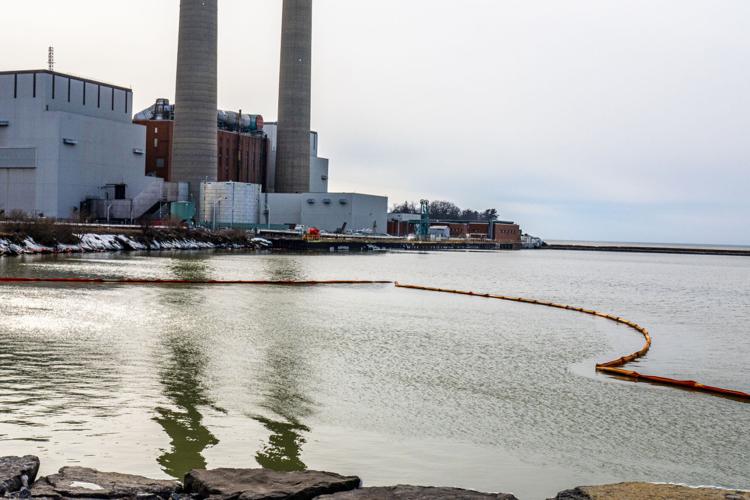 The main section of an oil spill in Oswego Harbor at the western edge of Breitbeck Park is corralled with orange booms on March 14. Randy Pellis/Oswego County News

A spill responder carries bags of sorbent pads used to soak up oil from Oswego Harbor along the western edge of Breitbeck Park on March 10. Randy Pellis/Oswego County News

Oil remains in Oswego Harbor at the western edge of Breitbeck Park as of March 14, after a spill was spotted by a pedestrian on March 8. Randy Pellis/Oswego County News

The main section of an oil spill in Oswego Harbor at the western edge of Breitbeck Park is corralled with orange booms on March 14. Randy Pellis/Oswego County News

WASHINGTON — A bill to require the U.S. Coast Guard to study the potential impacts of an oil spill has made its way through the first hurdle in Congress.

The Coast Guard Authorization Act, including this legislation, was passed by the House on Tuesday, 378-46. It awaits action in the Senate.

Save the River Executive Director John M. Peach said the bill is an important piece of legislation, something he is glad to see getting bipartisan support. The Coast Guard is already required to study potential oil spills in most other U.S. waterways, but the St. Lawrence River is not included.

“A bill was passed several years ago, and for whatever reason they didn’t include the St. Lawrence River in the Great Lakes,” Mr. Peach said. “Rep. Stefanik, when she realized that and everyone else realized that, she went back in and said it had to be fixed.”

Mr. Peach said oil spills are of concern in every waterway that carries ships. While oil is not typically carried as cargo through the St. Lawrence Seaway, the ships can hold thousands of gallons of fuel and oil for their own purposes at any time.

Mr. Peach said there is concern that a ship could sustain damage when running in the early spring, when ice can still be found in the St. Lawrence River. Ice remains on parts of the river this week, and the shipping season is already in its second week.

“Ships are running right now and there’s still ice out there, that’s always been a big concern of ours,” he said. “We would prefer to see ships not start running until the ice leaves the system.”

And if any oil were to be spilled in the Great Lakes, where it is sometimes carried as cargo, a spill could potentially enter the St. Lawrence River as well.

Just weeks ago, fuel oil leaked at an oil power station situated on the Lake Ontario shoreline on the west side of the city of Oswego. The heavy, No. 6 fuel oil was spotted March 8 by a woman walking along the western edge of Breitbeck Park.

No. 6 oil is considered a heavy fuel oil, HFO. According to the National Oceanic and Atmospheric Administration, “when spilled on water, HFO usually spreads into thick, dark-colored slicks, which can contain large amounts of oil. The most viscous oils will often break up into discrete patches and tarballs, instead of forming slicks. Oil recovery by skimmers and vacuum pumps can be very effective, early in the spill. Very little of this viscous oil is likely to disperse into the water column.”

“Shoreline cleanup can be very effective before the oil weathers and becomes very sticky and viscous,” NOAA adds.

Lt. Sean Dolan, of the U.S. Coast Guard Station in Buffalo, said Coast Guard and state Department of Environmental Conservation personnel are monitoring Oswego Harbor and overseeing the cleanup conducted by the responsible party, Oswego Harbor Power LLC. The company is owned by Generation Bridge and managed by Eastern Generation. NRG sold the power plant to Generation Bridge in December, according to Matt Schwall of Eastern Generation.

Last week, Lt. Dolan and Mr. Schwall would not comment on how much oil spilled into the harbor.

“We are still investigating that,” Mr. Schwall said, adding that how this happened is also “still under investigation.”

“We believe that it was a line rupture, but activities to determine for certain what the cause was are ongoing,” Mr. Schwall said.

He would not comment on the cost of the cleanup or who would be financially responsible for it. But according to Kim Staiger of the U.S. Environmental Protection Agency, “the polluter pays.”

The spill is now largely contained by booms.

The St. Lawrence River itself has seen an oil spill before, in the summer of 1975. Oil barge Nepco ran aground in the American Narrows, off Wellesley Island, and leaked an estimated 300,000 gallons of oil into the water. Cleanup was not completely finished when efforts stopped, and much of the spilled oil was left to naturally degrade.

Mr. Peach said he is glad to see this legislation lead the first step forward, and said he is hopeful it will receive support in the Senate.

‘ While oil is not typically carried as cargo through the St. Lawrence Seaway’ then why is a study needed? Just more wasted taxpayer money on another government boondoggle.